Colombia: Central bank delivers moderation but tightening cycle not yet over

Colombia's central bank, Banco de la Republica, continued with its – and most of the rest of the world's – aggressive rate hikes yesterday, with a 100bps increase in its policy rate to 10.0%, its highest level since September 2008. However, the lower-than-expected increase was somewhat of a surprise compared to the consensus. The Bloomberg consensus survey expected a 150bps increase, although 10 out of 29 analysts predicted a 100bps increase, with the rest expecting more. The Reuters survey was similarly divided, with eight of the 17 analysts forecasting an 100bps increase, with the rest expecting more. 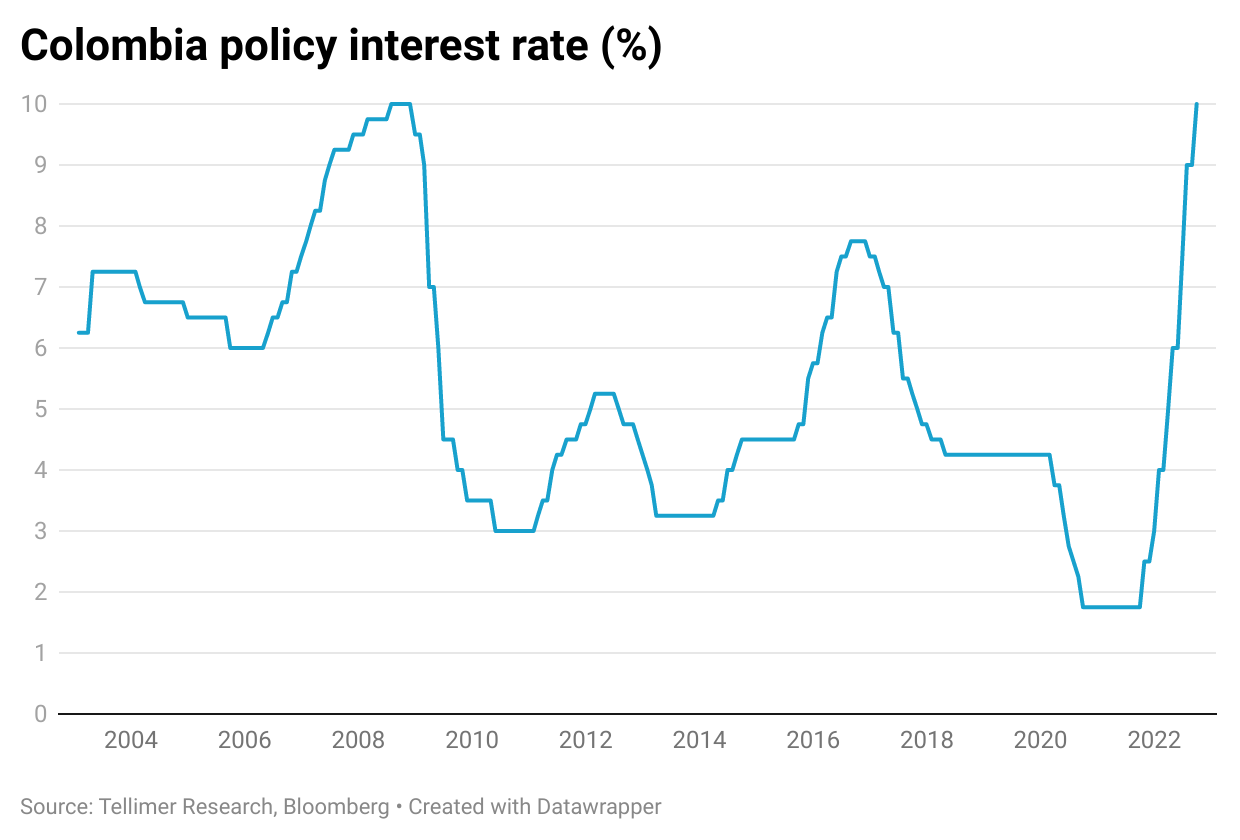 The increase was a majority decision. As at its last meeting in July, six Board Members voted in favour of the decision, with one member voting for a smaller increase (this time 50bps).

The move follows 150bps increases in each of its last two meetings (June and July) and brings the cumulative increase in this tightening cycle, which began 12 months ago, to 825bps, as the central bank fights inflation at a 20-year high.

CPI inflation rose to a new high of 10.8% yoy in August, up from 10.2% in July and 9.7% in June, and well above the central bank's 3% inflation target. In its statement, the central bank noted that the August print was above its own forecast (9.9%) while core inflation (excluding food and regulated items) maintained a higher-than-expected upward trend (standing at 6.9%). 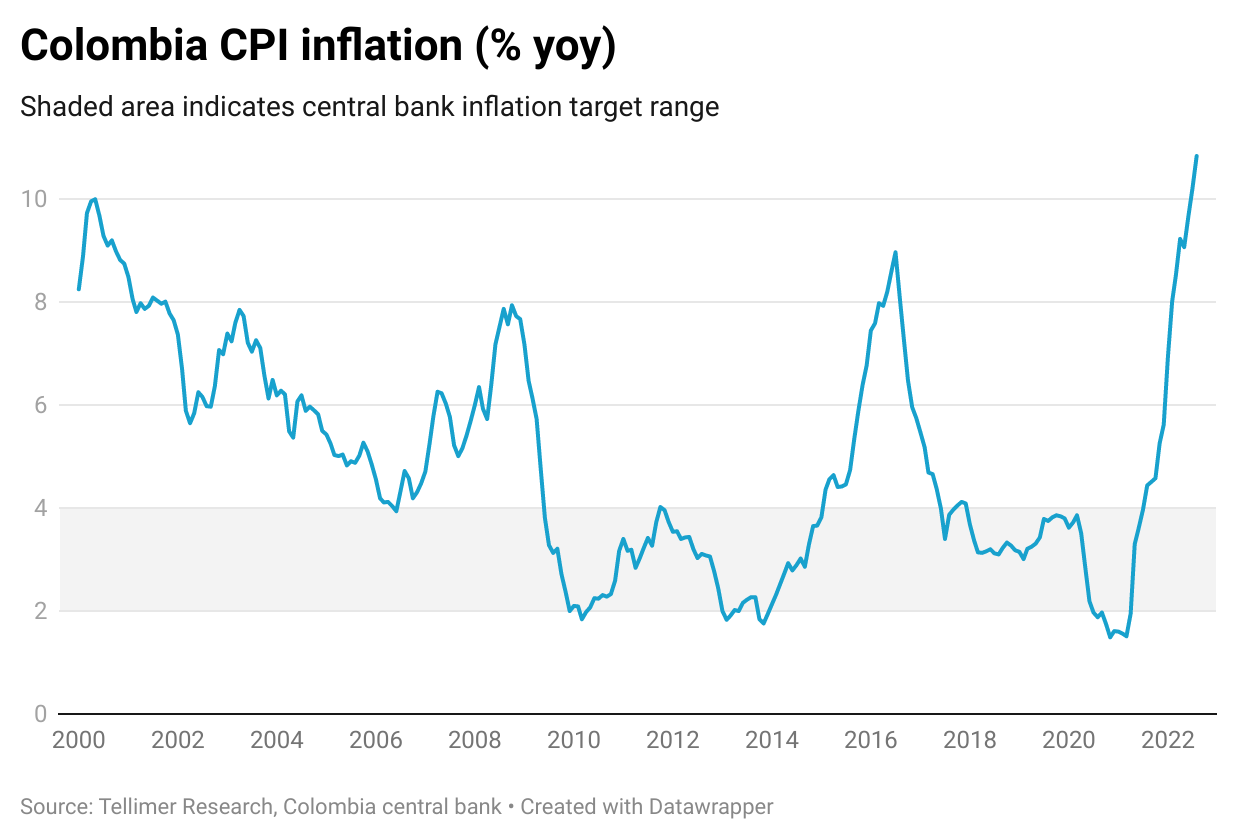 Medium-term inflation expectations had also increased, with the central bank's monthly survey of economic analysts showing a rise in inflation expectations (median basis) for end-2023 between August and September from 5.5% to 6.3%. The statement also referred to a weaker currency, with the Colombian peso (COP) down 10% vs the US dollar this year, although we note that it has been broadly stable since July. That said, we expect the outlook, amid current external headwinds, is for downward pressure on the currency to continue. 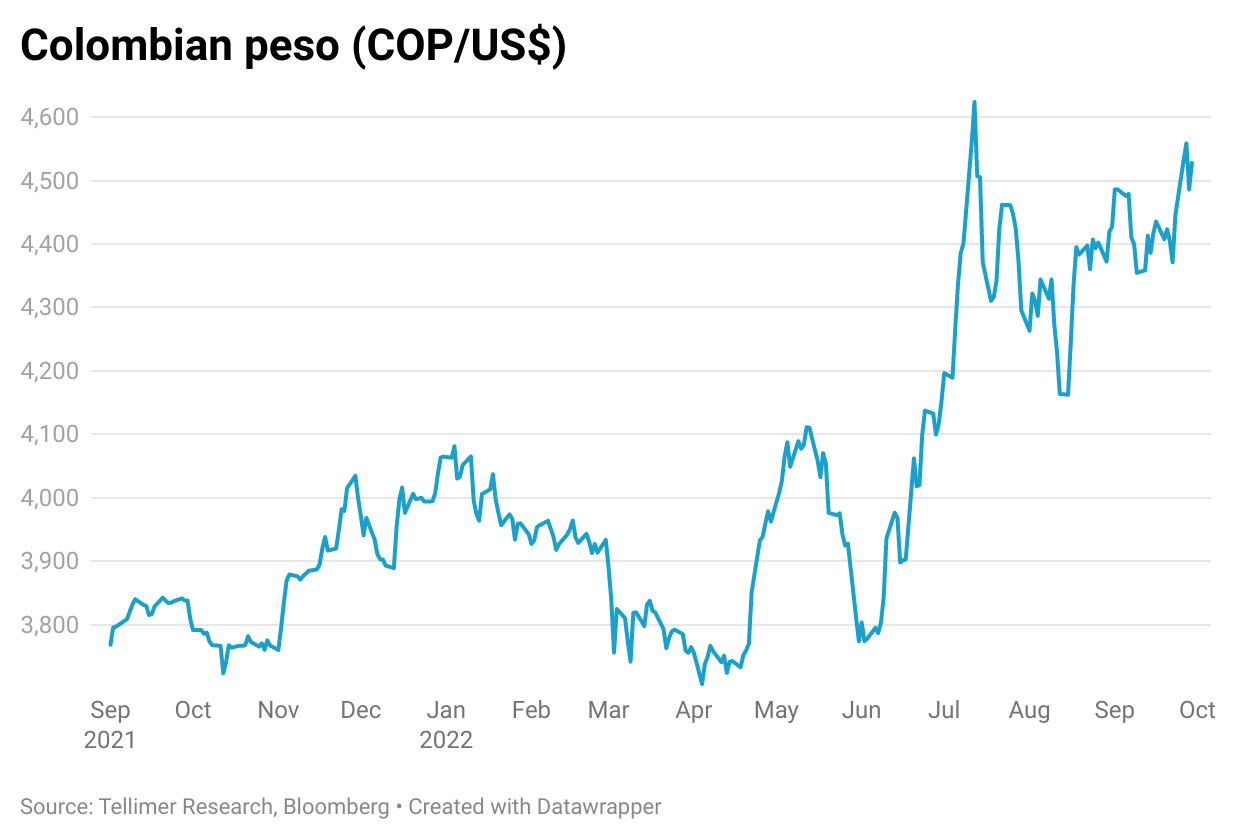 The central bank also revised upwards its forecast for 2022 real GDP growth, up from 6.9% to 7.8%, following the "dynamic" pace of economic activity in Q2. However, it revised 2023 growth down from 1.1% to 0.7% as it noted signs of a slowdown in economic activity.

Investors will look closely at the minutes of the September meeting, due to be published on 3 October, for more clues about forward guidance and the outlook for rates. In particular, investors may be left wondering whether the central bank has turned less hawkish after yesterday's decision.

Market participants had hoped the central bank may be nearing the end of its tightening cycle, a view perhaps reinforced by the minutes of the July board meeting published on 2 August that said it may now be possible to moderate the pace of additional interest rate rises in future (which begs the question why the consensus expected more). This is what the board has now done (with a 100bps increase rather than a 150bps hike), although the inflation data does not suggest to us that hikes are coming to an end any time soon. However, the slowing in activity that the central bank noted in its statement, resulting from the cumulative impact of previous tightening, may help to ease inflation pressure going forward while base effects should help to ease inflation readings next year. In addition, real interest rates are much less – but still – negative (based on actual inflation) but are positive, and well above the neutral rate, on the basis of one-year ahead inflation expectations. That said, there are also upside risks to inflation from government policy, with fuel price increases from the phasing out of gas subsidies and a rise in the minimum wage.

The central bank's next rate decision is due 28 October.