Colombia has drawn on its Flexible Credit Line (FCL) with the IMF in the amount of US$5.4bn (183% of quota), according to a statement by the IMF last night. The drawing was made by the authorities on Wednesday. The amount represents 2% of GDP and 9% of gross international reserves. It has another US$12.2bn it could draw on under this facility.

In its statement, the IMF said the drawing "will help meet balance of payments needs and provide support for the budgetary response to the Covid-19 pandemic while at the same time allowing Colombia to maintain sufficient international liquidity to insure against heighted external risks."

The FCL, established in 2009 in the wake of the GFC, is a precautionary credit line only available to Fund members with strong fundamentals. Countries pre-qualify, and once approved, are able to draw on the resources when and how they want. Disbursements are not phased or tied to compliance with policy targets. The cost is the same as the SBA or PLL.

This is Colombia's first ever drawing under the credit line, a facility that it has maintained for over four years. A two-year FCL was first approved in June 2016 and it has been rolled over since, with the most recent renewal being approved on 1 May amounting to US$10.8bn. This was augmented to US$17.6bn (600% of quota) on 25 September. At that time, the IMF noted that combined with its comfortable level of international reserves, the FCL provided added insurance against downside risks. Indeed, the IMF also noted that the authorities had "expressed their intention to partially draw on the arrangement for budget support to help Colombia effectively respond to the pandemic." The IMF statement announcing the drawing noted that Colombia intends to treat the remaining amount under the FCL as precautionary.

Other than novelty value, it will be interesting to see what investors make of the drawing. Recourse to IMF money could be seen as a sign of weakness. However, as a flexible contingent credit line without conditions, this is exactly what it's for. And the authorities had indicated they would draw on the facility so actually doing so should not be a surprise.

Moreover, the move will bolster reserves amid large financing needs post-Covid and should therefore help to reinforce investor sentiment. On the surface, even without these transactions, near-term liquidity doesn't seem to be a concern and the currency has strengthened, recovering all of its Covid-losses. Reserves amounted to US$57bn at end-October, and have increased by 7% this year. And the central bank also announced yesterday that it had purchased US$1.5bn from the government to strengthen its reserves position. But the IMF's reserve metrics suggest that Colombia's reserves coverage was not especially strong, ranked only at the median in a cross-country comparison test based on reserves to short-term debt, broad money, GDP and its ARA measure as of end-2019. Hence these drawings, and the rise in reserves seen YTD, will reinforce its reserves buffers in a cost effective manner. 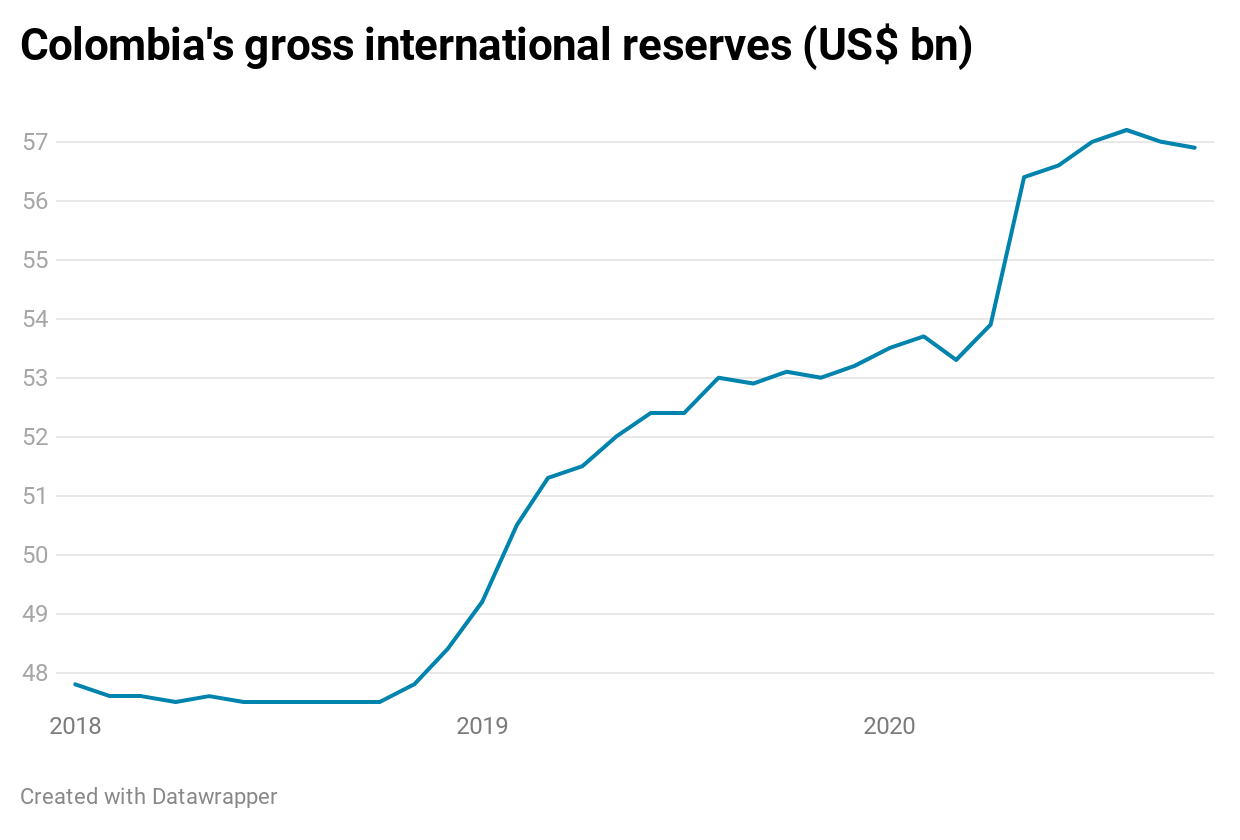 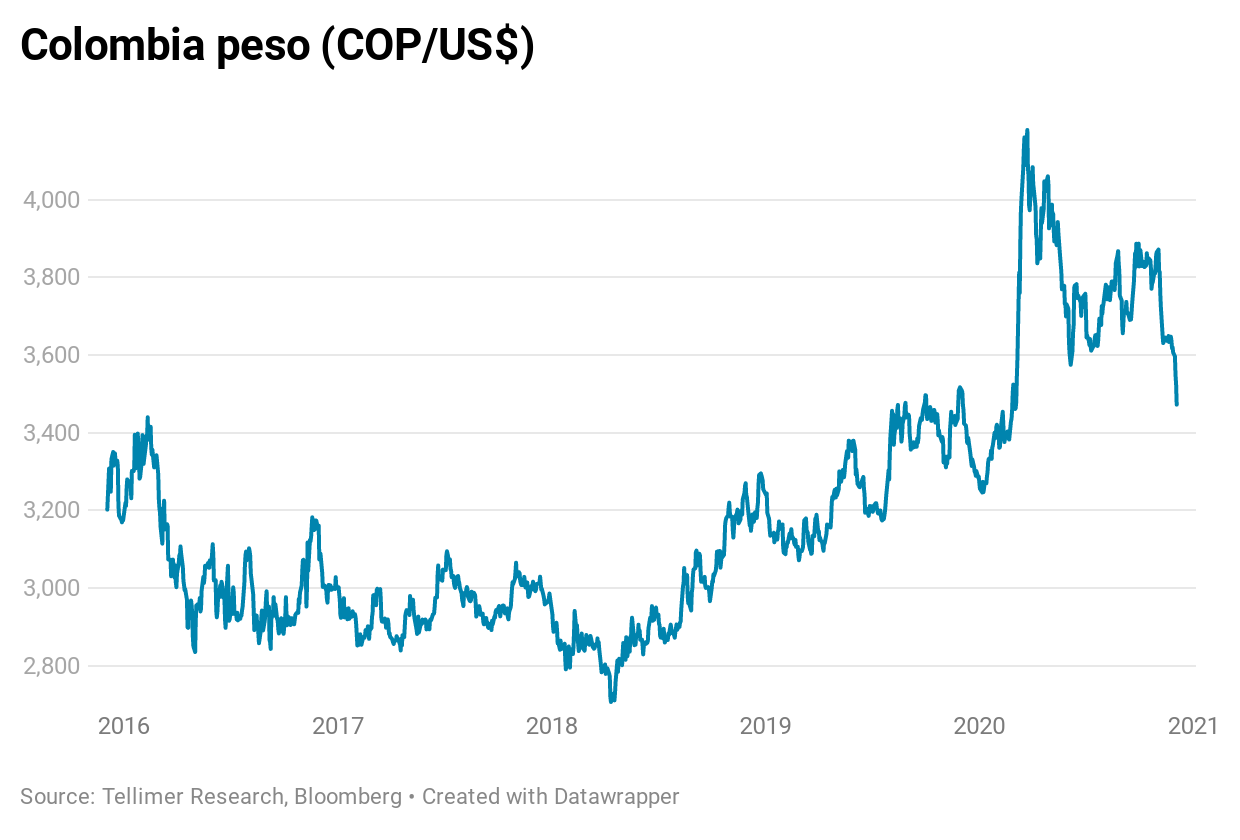 Yet Colombia is facing downward ratings pressure. The drawing also comes at the same time as Moody's placed its Baa2 rating on Negative outlook yesterday. A downgrade would bring it into line with the other two agencies (S&P and Fitch are both BBB-), although they both also have negative outlooks as well. Moody's concern is mainly fiscal. They appear to express concern over the fiscal consolidation path, noting it will only start in earnest in 2022 with results contingent upon a tax reform that will be discussed next year. It cautions that, in the absence of material fiscal consolidation, government debt metrics are unlikely to significantly improve, resulting in a weaker fiscal profile compared to its ratings' peers, as the Covid shock exerts a lasting impact. For its part, the IMF expects gross public debt to increase to 68% of GDP this year (+16ppts over 2019) as real GDP declines by 8.2% and the overall public sector deficit widens to 8.9% of GDP (+7ppts over 2019). However, the IMF seem to be more optimistic about fiscal consolidation, with the deficit falling to 3% by 2022, although despite this, public debt is not expected to fall below 60% until 2025. Gross public sector financing needs are also high, however, at 10.8% of GDP this year and 9.1% in 2021.

We do not have a rating on Colombia. 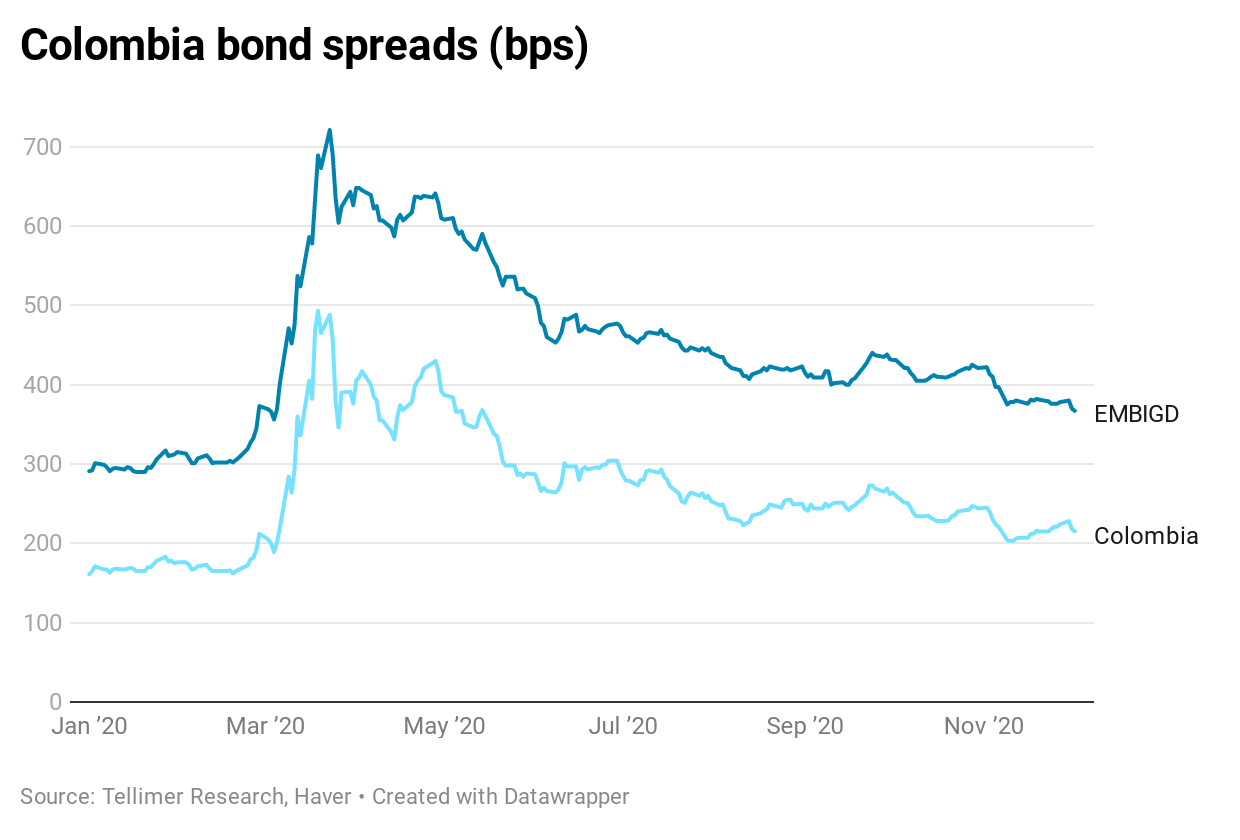