Chinese lending in Africa is concentrated in five countries

As we begin a new week, the world remains in varying degrees of turmoil. The war in Ukraine continues to drag on as it twists and turns, and this weekend, Russian troops started to shell Kyiv again, signifying that this war is far from over. Equity markets are back up this morning but finished last week on the back foot, highlighting uncertainty while central banks continue to push hard in their fight against inflation. But that will only go so far in taming inflation while oil prices are back above $120.00pb.

Brent is back above $120 per barrel this morning, following Saudi Arabia increasing its official selling price for crude to Asian markets, signalling confidence in the demand outlook despite growing concerns out of China. Saudi Aramco raised the price of its key Arab Light crude by $2.10 per barrel to $6.50 per barrel over its benchmark. This was a much larger than expected increase and shows that the oil producer does not expect a slowdown in demand through Asia from July onwards, pinning its hopes on policy easing measures implemented by China and the rollback of COVID restrictions in the world’s largest oil importer.

Meanwhile, the market continues to digest last week’s OPEC+ meeting. Given that we are seeing timespreads across the  Brent futures curve widen out in backwardation, it is clear that the market does not see the cartel and its allies reaching their promised output increase in the months ahead. Brent’s prompt timespread has widened to its highest this month and is well above the average seen through May. This suggests that the market is expected to remain tight over the coming months, keeping prices supported as a result.

Angola: In Angola's first-ever initial public offering, the biggest lender, Banco BAI, raised AOA 40.1bn ($94mn) from the sale of 10% of its shares. According to the bank, the shares were priced at AOA 20,640, the top of the AOA 17,200-20,640 IPO’s range. The offer was oversubscribed 1.58 times, with shares coming from two of its biggest investors, state-owned oil company Sonangol and diamond producer Endiama. The BAI shares are set to debut on Luanda's stock exchange on June 9, marking the start of equity trading in the country. The move may help bolster President Lourenco's image as a reformer ahead of the August elections and could help trigger other planned listings that aim to attract foreign investment and diversify the economy.

Mali: Moody’s on Friday confirmed the long-term foreign and local currency issuer ratings of Mali at Caa2 and changed the outlook to negative from ratings under review. According to Moody’s, the negative outlook reflects risks and the uncertainty associated with the possibility that the negotiations either fail to provide a workable arrangement between the parties or take too long to come to fruition which will ultimately severely damage the economy, the country’s public finances and potentially lead to losses for creditors no longer compatible with a Caa2 rating. While an upgrade is unlikely at present given the negative outlook, Moody’s indicated that a stabilization of the outlook at the current Caa2 rating could materialise if a credible agreement between the Malian military-led government and the ECOWAS/international community resulted in an effective lift of the economic and financial sanctions that limited the losses incurred by investors due to the accumulation of arrears on commercial debt. A downgrade could materialize if Moody’s were to conclude the economic and financial sanctions imposed on Mali were likely to be more protracted and lead to greater than expected losses for investors no longer consistent with a Caa2 rating.

Egypt: Egypt on Friday signed a $6bn funding agreement with the Islamic Development Bank. The funding is set to help cover the importation of basic commodities for Egypt, a major wheat and grain buyer. The support will ease some pressure on Egypt, which uses these commodities as the cornerstone of a bread subsidy program used by about 70% of its population.

Kenya: To help combat inflation ahead of the general elections in August, Kenyan lawmakers are reportedly seeking to reduce or block proposed tax increases on key items, including cooking gas and digital services. According to the chairwoman of the legislature's finance committee, the value-added tax on cooking gas should be halved to 8% "to protect Kenyans from the growing cost of living." Consumers have been paying 16% VAT on gas for almost a year. The lawmakers have also rejected the National Treasury's plan to double the digital service tax to 3%, saying the additional cost will be passed on to users. A threshold for digital services companies to register for value-added tax was set at a turnover of KES5mn ($42,789) "to protect the very small businesses," according to the chairwoman. A final vote on the bill that adjusts the tax regime is scheduled for this week and once approved, it will be sent to the president to sign it into law.

Mauritius: Joining a host of other African central banks that have hiked rates this year to combat surging inflation, the Bank of Mauritius on Friday raised interest rates by the biggest margin in more than a decade. Specifically, the central bank raised its benchmark rate by 25bps the most since June 2011, to 2.25%. The rate hike comes after inflation accelerated to 11% in April, the highest in more than eight years, and according to Governor Harvesh Seegolam, inflationary pressures are expected to persist for the rest of the year.

Nigeria: Speaking on the sidelines of the Islamic Development Bank, Finance Minister Zainab Ahmed said that the government is confident that Nigeria will surpass this year's non-oil revenue target based on collections made in the first three months of the year. According to Ahmed, "in 2021, our non-oil revenues outperformed our budget by an aggregate of 15%. In 2022, our first quarter shows that already, the company income tax and VAT are slightly above the projected target." Ahmed added that the rise in non-oil revenues will help the country avoid a prediction by the International Monetary Fund that debt service would completely consume all of the country's income by 2026.

While the Bank of Ghana has hiked interest rates aggressively, with the latest being a 200bps hike last month, and the government adopted a raft of fiscal measures, it appears the strategies have yet to provide support to the Ghanaian Cedi (GHS). The Cedi remains Africa's worst-performing currency on a year-to-date basis, down by over 21.0%. Only the Cedi and Malawian Kwacha have registered losses north of 20%, with the latter’s poor performance coming on the back of a 25% depreciation by the central bank last week. 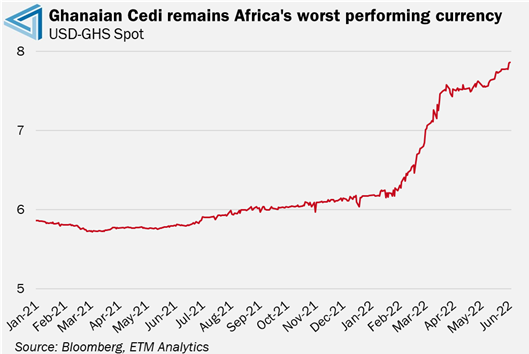 Concerns over the country's fiscal objectives remain, while an unfavourable global economic backdrop has added further headwinds for the Cedi. Risks exist that Ghana's fiscal metrics could deteriorate further due to lower lower-than-expected revenue and increased borrowing. Ghana’s debt to GDP ratio currently stands at 78%. According to the International Monetary Fund Ghana is at high risk of debt distress. Further weakness appears to be on the cards with the non-deliverable forwards market currently pricing in depreciation to north of 10.000 over the next 12 months.

Aside from increasing debt servicing costs, it is worth noting that Fitch has indicated that continued Cedi weakness is likely to increase revenue risks for foreign investors that rely on expatriation of revenue. According to Fitch, a notable depreciation in the Cedi will make private investors more reluctant to invest in Ghana's infrastructure sector. Therefore, private sector investment is unlikely to sufficiently cushion the negative impact of subdued infrastructure spending on the market's construction industry growth in the coming months.

A study conducted by the Columbia University and the department of politics and international relations at the University of Oxford revealed that while China is Africa's biggest bilateral creditor, most of the debt is due to private Western holders of African debt. The researchers said in the report that Chinese debt is not the most rapidly growing segment of debt. Other credit lines have grown a lot more in recent years, especially those towards commercial creditors.

The Western segment has grown much faster than any liabilities that African states owe other creditors in the last couple of years. The report cited confidential estimates of international financial institutions that showed sub-Saharan Africa's government debts to Chinese entities at the end of 2019 stood at around $78bn. This marked around 8% of the region's total debt of $954bn and 18% of Africa's external debt.

The researchers said that around half of Africa's public debt was domestically issued, and the other half was owed to external creditors. One-third of Africa’s external debt was owed to bilateral official partners, one-third to international financial institutions and one-third in the form of Eurobonds denominated in a currency other than that of the issuing state. The estimates from international financial institutions showed that about half of the bilateral debt was owed to China.

The figures broadly aligned with the World Bank's International Debt Statistics, which show that Africa has about $427bn in external debt. The World Bank data also shows that Chinese-held debt makes up half of the bilateral debt stock. The Global Development Policy Center at Boston University and the China Africa Research Initiative at Johns Hopkins University estimate that Beijing has lent about $150bn to African countries since 2000.

The researchers said in the report that while this is a sizeable amount, it is not enough to have been the main driver of the debt build-up in Africa over the past decade. The report also found that Chinese lending, rather than driving a continent-wide expansion of debt, was heavily concentrated in five countries, namely Angola, Ethiopia, Kenya, Nigeria and Zambia.

Macroeconomic: Angolan President proposes a date for the 2022 general election

Politics are gaining focus in Africa as we head towards three key presidential elections. August will see Kenyans and Angolans head to the polls to decide on their next presidents. We also have Nigeria’s election in early 2023. Angolan President Joao Lourenco proposed on Friday that the country holds its general elections on August 24. A spokesman for the Angolan government confirmed the date.

Ahead of the election, the government approved a 10% increase in pension payments after more than doubling wages for its lowest-paid state workers. The policy moves, together with the positive impact of high international oil prices, should boost support for President Lourenco. We expect Lourenco to be victorious in the upcoming election but do expect the race to be far tighter than in 2017.