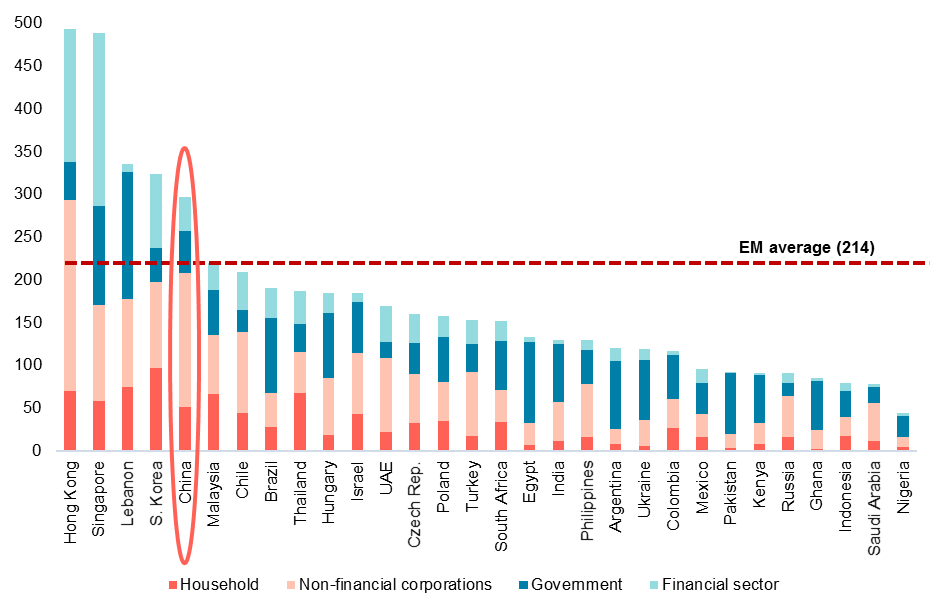 China’s total debt burden has risen sharply since the global financial crisis, becoming a source of concern for both policymakers and investors alike. Corporate debt stood at 145% of GDP in 2016, according to the IMF, and total debt is estimated at nearly 300% of GDP, according to the IIF, one of the highest among EM (Figure 1). Moreover, S&P identified the boom in unregulated local government debt – possibly as high as US$5.78tn (c41% of GDP) – as a particular worry, saying it could represent a “debt iceberg with titanic credit risks”.

But China has taken steps to rein in this debt binge. Sensitive to the risks to macro stability, the government has sought to curtail shadow banking activities and restrict borrowings by LGFVs, which are used by Chinese cities and provinces to raise funds for local infrastructure projects off balance sheet. Commencing 1 July, LGFVs are now only allowed to refinance existing debt in the remainder of this year, rather than issue new debt.

According to the FT, the announcement of this from China’s National Development and Reform Commission in mid-June prompted several companies to go to market with new US dollar bonds in the last two weeks of June. Demand for LGFV debt has been huge YTD – the companies sold US$12.4bn in US dollar bonds in H1, double the issuance in H1 18. However, investors and market commentators expect a sharp decline in new issuance as we move into H2.

We think the timing of a combination of the truce in the US-China trade war and the impact of the regulation on new borrowers, along with continued low interest rates in major economies, could spark new interest in Chinese issuance, opening the door to new issuers that may have previously been crowded out.

More generally, according to the IMF, China’s financial system is expected to shift from traditionally bank-based finance towards capital markets to improve the allocation of savings and investment, in which the bond market will play a greater role. Chinese corporates are already big issuers (the biggest weight in the CEMBI). But international capital markets offer the chance for Chinese borrowers to diverse sources of funding and extend maturities, away from short-term bank debt. Foreign ownership of Chinese government bonds has already quadrupled to almost 8% in the past five years, according to the IMF.

This shift will be aided by index inclusion, as noted by the IMF, where certain Chinese issues were added to the Bloomberg Barclays Global Aggregate Index in April 2019.