China's response to Pelosi trip does not trigger crisis (yet)

Last week's Taiwan visit by US House Speaker Nancy Pelosi and the military drills by China, in response, have brought long-standing geopolitical risks to the fore for global investors.

However, the telegraphed nature of China's response should allay concerns that a major crisis is underway. Furthermore, the precedent from the last actual crisis in the Taiwan Strait, in 1995-96, suggests that the clear demonstration of how costly a war would be for all concerned should lead to an ultimate de-escalation.

And for emerging market investors, the valuation of the largest stock in the index, TSMC, already reflects a good deal of concern, with its forward PE on a 25% discount to the 5-year median. Few cared when we discussed these risks in 2021 and TSMC was valued at a substantial premium.

Pelosi was the most senior US official to visit since one of her predecessors, Newt Gingrich, in 1997. The scale of military drills conducted by China in response is also without precedent over this time frame.

Compared to that era:

Concerns have ranged from supply chain disruption at a time of accelerating global inflation, the potential for human error to trigger a hot military conflict, and greater dysfunction in relations between China and the US impacting trade, security, climate, and pandemic management.

However, the precedent from the last Taiwan Strait Crisis in 1995-96 is that the spectre of a costly war ultimately drives de-escalation. And the aftermath of that crisis established the "strategic ambiguity" in US foreign policy which has since served both the US and China well:

Putting the rationality and internal pressures of each leader to one side, when comparing Russia-Ukraine with China-Taiwan, there is no land border which makes for a quicker invasion, a sympathetic or partly subdued population near that border, and opposing multinational forces are already stationed nearby with a track record of coordination.

And it is not even clear that the events of the last week amount to a crisis. China telegraphed the start (and finish) of its drills and (so far) there is little counter-escalation from Taiwan or US. The drills and the diplomatic rhetoric from China convey the cost involved in any hot military conflict and the outrage it wishes to project over any interference in Taiwan but in a manner that serious US policymakers would surely consider entirely predictable. 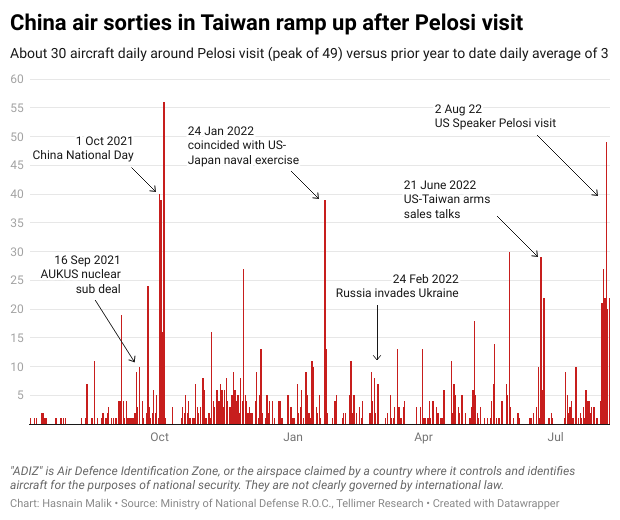 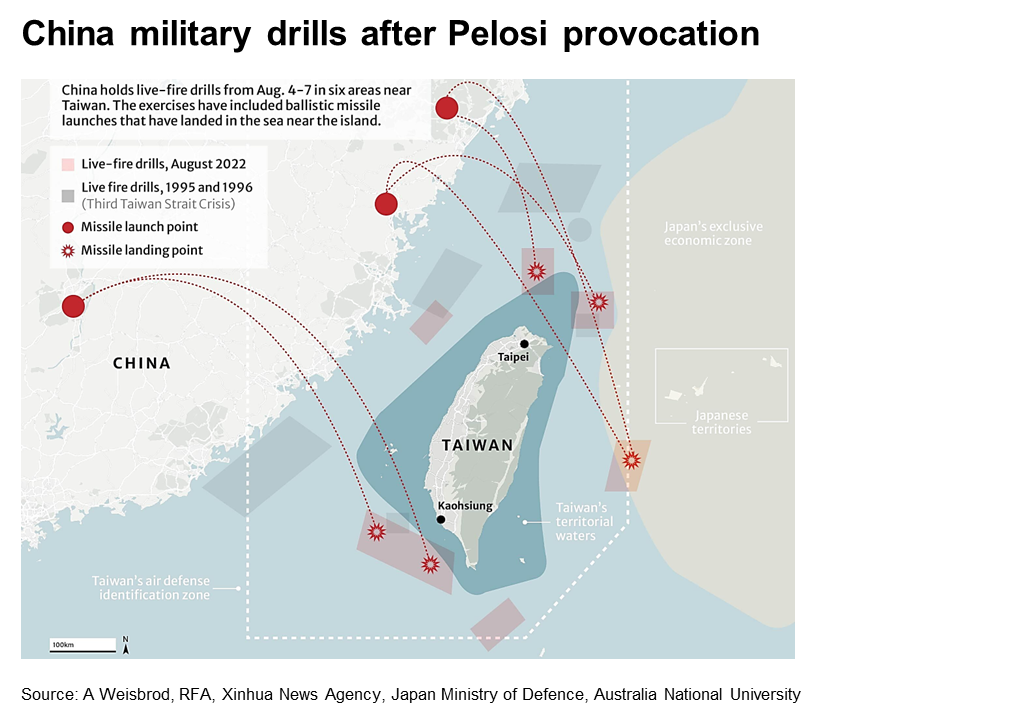 The status quo in terms of the risks surrounding China, Taiwan, and the US can be summarised in the following ten points — our previously published reports on these points are linked. The key question is what, if anything, has changed as a result of the events of the past week?

A History of Taiwan Strait Crises

The First (1954) and Second (1958) Taiwan Strait Crises occurred in the aftermath of the Chinese Civil War (1945-49) between the communists, who emerged victorious, and the nationalists, who retreated to Taiwan under Chiang Kai-shek and sought closer relations with the US (under President Eisenhower).

The Third Taiwan Strait Crisis (July 1995 to March 1996) was triggered, by the visit of Taiwan Lee Teng-hui to the US, after votes in the US Congress forced a reluctant US State Department to issue him a visa, and continued until the first direct presidential election in Taiwan.

In response, China, under President Jiang Zemin, mobilised troops in the coastal province of Fujian, and conducted months of missile and live ammunition tests and exercises involving naval vessels and amphibious assault units.

In its counter-response, the US, under President Clinton, deployed naval ships to the Taiwan Strait, initially an amphibious assault ship in July 1995, followed by a first aircraft carrier group in December 1995, and then a second one in March 1996.

The immediate aftermath of the crisis appeared as a double setback for China: the credible threat of a US military response prompted a climbdown and the Taiwanese electorate overwhelmingly supported presidential candidates more in favour of independence (winning 75% of votes) than pro-reunification mindset (15%).

However, within two years, President Clinton had pledged the "Three No's": no to Taiwan independence, no to "two Chinas", and no to Taiwan membership of international organisations. The Third Taiwan Strait Crisis had not worked out so poorly for China after all.

China's share of global trade and military spending is far greater than in 1996. It remains to be seen whether China's latest demonstration of force around Taiwan has credibly demonstrated to the US, Japan, South Korea and other allies, its potential for disrupting sea and airborne trade around Taiwan and the costs to militarily defeat it.

Taiwan Semiconductor Manufacturing Company, TSMC, is the largest single stock in the MSCI EM index and has a 6.3% weight. Taiwan, overall, has a 14.2% weight, second only to China-HK (31.7%).

However, with forward 12-month PE of 13.8x, about a 25% discount to the 5-year median, a good deal of risk is, perhaps, already reflected. 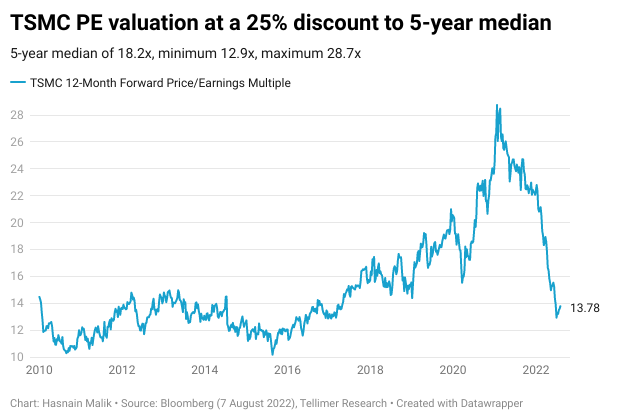