US Treasury yields jumped again yesterday, driven by lower-than-expected US jobless claims figures, which set the stage for today’s non-farm payrolls figures. Traders are bracing for the possibility of a strong jobs report, which will cement the hawkish view of the Fed and make a 75bp rate hike this month all but certain. The selling pressure in the market was led by the long end of the curve, with the moves higher for yields held through the back-end of the New York session and into this morning’s Asian session. Given all that is priced in right now, there is the risk that we see a rally post the jobs figures unless they come out significantly stronger than expected.

Meanwhile, UK bond yields also climbed higher yesterday as the BoE published the details of its gilt sales plan and indicated that this could start this month if policymakers approve the plan at the upcoming MPC meeting. Meanwhile, Italian bonds continued to weaken on expectations that the ECB would turn more hawkish at its September meeting. The BTP-Bund spread widened to a five-week high yesterday as the market has priced in around 175bp of rate hike risk for the rest of the year.

USD-JPY has smashed through the 140.00 barrier and slides to a 24yr low vs the USD. The BoJ is now threatening to intervene to prevent a further collapse in Japan's purchasing power internationally. As it is, the weaker JPY has contributed to high input costs in their production processes. Resource currencies are also under considerable pressure as the USD surges with the USD index rapidly heading towards 110.00, the highest it has been in around two decades. Finally, the majors of the EUR and the GBP are also succumbing to the USD steamroller as the EUR dips back below parity and the GBP slides to 1.1550. This now places the USD very firmly in overbought territory. However, picking the top of this USD move is proving hazardous. With the Fed still deemed to be the most aggressive central bank as it races to catch up to the curve, investors are pricing in volatility in financial markets and a rotation back to the safety of the USD.

Ethiopia: Eritrean and Ethiopian forces reportedly began an offensive in four areas in Ethiopia’s northern Tigray region. According to a dissident Tigray People’s Liberation Front member, the attacks started early on Thursday morning, and Ethiopia and Eritrea are “coordinating their efforts to turn this into a regional conflagration.” Eritrea joining the conflict would signal an escalation in the conflict in Tigray, and the resumption of fighting will hamper efforts by Ethiopia’s government to improve relations with international financiers as it awaits an International Monetary Fund loan amid efforts to revamp its debt.

Nigeria: Emirates airlines, in a statement yesterday, said that it would resume flights to Lagos from September 11 after the Central Bank of Nigeria (CBN) released a portion of the funds the airline had earned in the country but had not been able to repatriate. Emirates added that it continues to “engage with Nigerian authorities to ensure the repatriation of outstanding and future funds may continue without hindrance.” The airline, however, did not say how much money had been released or had remained blocked. Last week, the CBN released $265mn to settle ticket sales owed to airline operators. According to the International Air Transport Association, Nigeria, as of August, owed carriers $464mn. The amounts owed stem from the fact that the CBN has restricted access to foreign currency to tackle a severe dollar shortage in the economy.

Uganda: Uganda’s Finance Ministry yesterday said it was removing a 5% export levy on refined gold that prompted a slump in shipments overseas. According to an official from the Ministry, the levy has been scrapped in the revised Minerals and Mining Bill, which is awaiting presidential approval. Uganda introduced the levy and a 10% tax on unprocessed gold on July 1 last year to boost revenue from the metal, which had overtaken coffee as the top foreign exchange earner.

Zambia: At a press conference yesterday, the IMF said that while Zambia's outlook is more positive, the government still has to do more. The IMF also said that its debt sustainability analysis, which will form the basis of debt restructuring negotiations with Zambia's creditors, will be published in the coming days. According to Zambia's Finance Ministry, the document sets the parameters debt reworking talks will need to adhere to, and negotiations with private and official creditors will begin "vigorously" this month. The Ministry added that the forms of relief each creditor will thrash out between maturity extensions or principal haircuts will be the product of these talks.

Oil: Oil’s plunge seems to have been brought to a halt for now, with the market rebounding this morning as focus turns towards the OPEC+ meeting scheduled for early next week. Crude is paring its weekly loss, but we still have Brent down more than $10 per barrel from its Monday highs, trading near $94.20 per barrel. Economic growth concerns and the possibility of more supply have driven the declines, while low levels of liquidity have meant that oil’s moves have been quite volatile recently. Supporting the rebound this morning are headlines stating that the US has called Iran’s response to the nuclear talks “non-constructive.” A US spokesperson did not elaborate on the remarks, but this suggests that there is still some work to do before a deal is reached and Iranian crude can return to the market. With this in mind and ahead of the OPEC+ meeting on Monday, traders may be a bit wary of shorting crude for now. However, we still see scope for further downside for oil over the coming months given the current macroeconomic environment, with central banks tightening monetary policy aggressively to choke inflation out of their economies.

Forex: Zambian kwacha rallies on the back of a $1.3bn IMF support package

After closing out the month of August as the best-performing African currency against the USD, the Zambian kwacha remained on the front foot at the start of the new month. News that Zambia had secured a long-waited approval for a $1.3bn International Monetary Fund support package boosted the kwacha. The kwacha appreciated more than 3% against the USD yesterday to close at its strongest level since early March 2020. 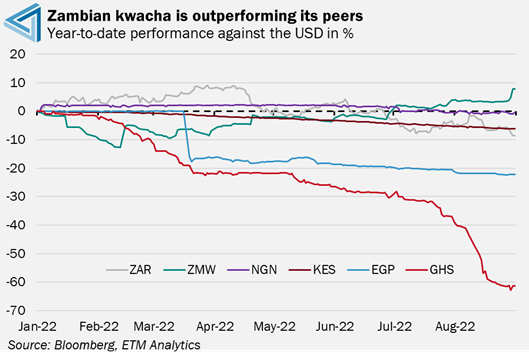 Yesterday’s gains added to the kwacha’s year-to-date advance of over 8%, making it the best performing African currency against the USD in 2022. Prior to yesterday’s developments, the kwacha had strengthened amid improved liquidity conditions due to continued central bank intervention into the FX market,  a recovery in foreign portfolio flows, and expectations that a deal with the IMF would put the country on a more sustainable fiscal path.

In the coming days, the kwacha is set to firm further, supported by favourable market sentiment. However, the kwacha is now significantly overvalued on a real effective exchange rate basis. This suggests that the room for significant gains, as seen post the elections last year, remains limited. Moreover, the debt rework is far from complete, and potential challenges remain. Zambia still needs to sign a legally non-binding memorandum of understanding with the official bilateral creditors committee, which China and France co-chair. The authorities plan to conclude talks for this pact by the end of the year. Zambia will then have to negotiate individual restructuring deals with its official bilateral creditors and seek comparable treatment from private creditors.

Fixed Income: China’s handling of Zambia’s debt could set a precedent for debt treatment across Africa

Now that the International Monetary Fund has rubberstamped the $1.3bn loan for Zambia, the focus shifts to China and how it deals with Zambia’s fiscal challenges. China’s promise to provide debt relief for Zambia is being watched closely as it could set a costly precedent in other heavily indebted countries across the continent. According to World Bank data, Africa is home to the countries that are most heavily indebted to China, which include Angola, Djibouti, Congo and Zambia. 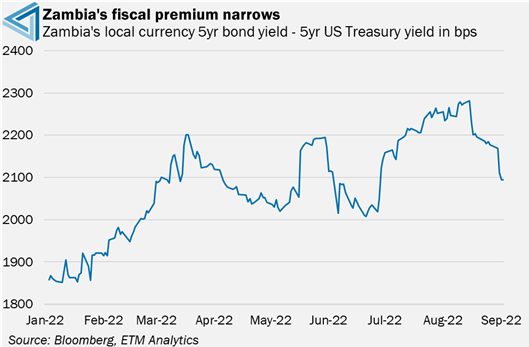 China's road and rail initiative, which finances the construction of port, rail and land infrastructure across the globe, has resulted in a significant rise in debt owed to China over the past decade. Over the past decade, Chinese lending to low and middle-income countries has risen to more than $170bn, up more than $130bn from a decade earlier. Chinese loans have higher interest rates than those from international lenders such as the IMF and World Bank or bilateral loans from Paris Club countries and also have shorter repayment windows.

Therefore, following the fiscal degradation that has materialised over the past two and half years, China will be pivotal in treating debt in Africa. While China had towed a hardline on debt forgiveness and debt relief, Beijing seems to have made an about turn on its willingness to cooperate in debt relief in Africa. China’s actions toward Zambia in recent months provide insight into how China could work with other lenders to tackle the threat of a wave of defaults across Africa. As highlighted above, China is a significant lender to Africa and as such, China has massive exposure to debt in Africa and wouldn’t want to risk a broad-based fiscal crisis.

The regional calendar was headlined by Nigeria’s economy-wide PMI report on Thursday. Despite falling from 53.2 in July to 52.3 in August, the headline reading suggests that activity in Nigeria’s private sector continued to expand last month. Details from the S&P Global report showed that output, new orders, and purchasing activity expanded at a softer pace in August than in July. Employment meanwhile rose at a quicker pace. 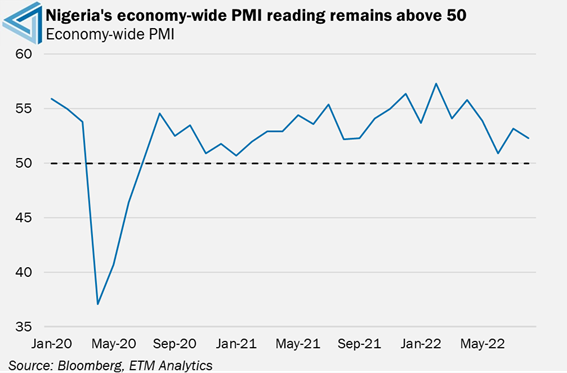 Looking ahead, firms remained optimistic about output growth in the year ahead despite a number of headwinds facing Nigeria’s economy, including persistent supply chain issues, tighter monetary conditions and an ailing oil sector. That said, the degree of positivity was the weakest in 9 months.