China's central bank, the People's Bank of China (PBOC), announced yesterday a reduction in its reserve requirement ratio (RRR) in a clear signal that it intends to support growth, rather than worry about inflation. At the same time, property developer Evergrande risked getting closer to default after missing the end of a 30-day grace period to pay the US$82.5mn in interest due on two dollar bonds and appearing to accept the need for a restructuring. At the timing of writing, both payments were still unpaid.

Although the timing of the two events may not be a coincidence, monetary easing to support confidence (which may have provided a short-term fillip to the property sector) at a time when the real estate crisis may be getting worse, takes us no closer to seeing how this situation will be resolved. There might still be hope that the state will ultimately support the bigger and/or preferred property developers, but reports last Friday that the provincial government was sending in a team of debt advisers to Evergrande may signal otherwise.

According to reports, the company said in a filing that it planned to “actively engage” with offshore creditors on a restructuring and that it intended to include all its offshore public bonds and private debt obligations in such a process. Evergrande bond prices remain distressed. Nor is it clear what the authorities' approach means for other property developers.

We wonder if the authorities might think it makes sense to pay now in order to buy a bit more time to devise a coherent strategy, rather than test the patience of investors who so far haven't rushed to accelerate. The next Evergrande payments are due on 28 December, and using the 30-day grace period would effectively give the company until the end of January. But they are also the biggest bond payments yet, since the crisis deepened since September, amounting to US$255mn (US$50.4mn on EVERRE 7.5% 2023 and US$204.8mn on EVERRE 8.75% 2025). And four other bond payments are also due in January (two on the 22nd and two on the 24th), although using the grace period could defer these until February. 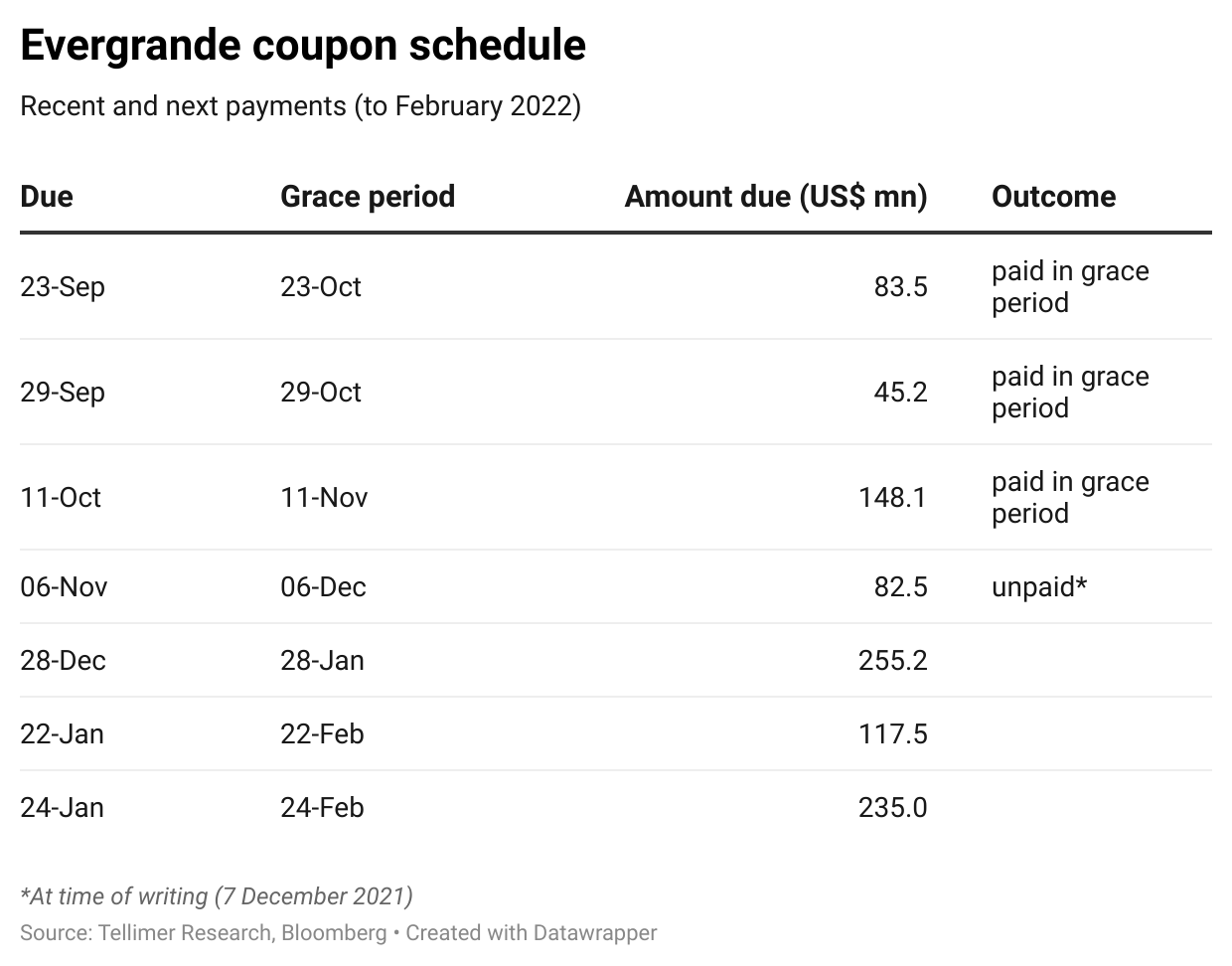 The PBOC said on Monday that it will lower the RRR by 50bps effective 15 December. The standard RRR rate will decline from 12% to 11.5%, and follows its previous cut, also 50bps, in July. According to the central bank, the move will inject US$188bn in liquidity and see the weighted average RRR fall to 8.4%.

The cut in the RRR rate is more of a quantitative measure, rather than direct interest rate cuts, designed to free-up lending to support companies. Interest rates themselves have been unchanged since the immediate response to Covid early last year, although media reports suggest one could be in the offing (which would send an even stronger signal that the government is prioritising growth and "stability"). The PBOC today announced a 25bps cut in the relending rate for SMEs and the rural sector.

China's real GDP growth eased to 4.9% yoy in Q3, as the post-Covid bounce back unwinds and amid renewed restrictions under Beijing's zero tolerance policy for new infections and the unfolding property crisis, and is projected to slow further in Q4. The Bloomberg consensus is for annual growth of 3.1% this quarter.

Real GDP growth is projected at 5.3% next year, still something many countries would wish for, but well down on what China has been used to (pre-pandemic), reflecting the slowdown in potential growth, amid population aging and declining productivity growth, and the inevitable result of growth convergence. China observers note that slower growth will not be desirable ahead of the Party’s 20th Congress next year. The Central Economic Work Conference is also due to spell out its policy plans for next year later this month. 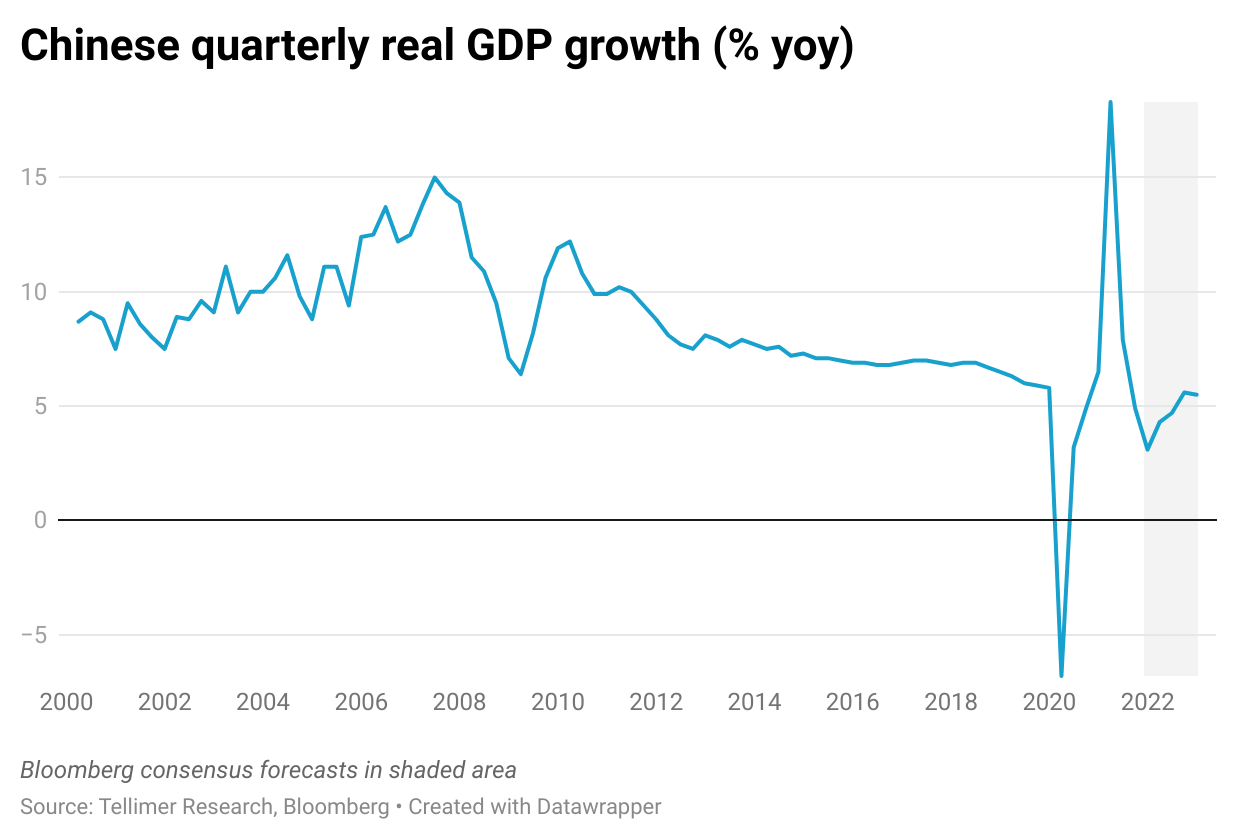 But with Evergrande's default, which would be the biggest in Chinese corporate history, now long-anticipated, EM investors' attention may shift from the credit and portfolio impact to the real economic impact, and ultimately on the hit to Chinese GDP growth.

The PBOC may be signalling that the authorities now accept that the financial fallout may have a real economic impact (which we think they've previously played down, if not denied), and that they are prepared to act to limit this impact. That may in the end be welcome news for EM investors. Moreover, Beijing has plenty more ammunition to act if it needs to.