We do not expect to hear anything sufficiently specific from the forum that immediately moves markets. But we anticipate responses from the Chinese leadership on some of the following oft-mentioned BRI criticisms and concerns from the US, geopolitical allies of the US, multilateral agencies such as the IMF and mainstream (Western) media:

(1) Debt-financing burden resulting from BRI for recipient countries – we expect the Chinese to argue that BRI-related financing is small compared to the overall external financing burden for most recipient countries. (In the strictest sense this would be accurate, but when all China-related finance – of which BRI is merely one component – is consolidated, then there are countries such as Ecuador, Pakistan and Sri Lanka, where "China Inc" is a very significant creditor, arguably large enough to have an influence on the treatment of others in a default scenario).

(2) Lack of financial transparency in BRI agreements – we expect the Chinese to argue that this detail is disclosed at the individual project level as more detailed planning is undertaken (this is likely not the sort of quantified, consolidated liability data required by institutional investors in a recipient country).

(3) Lack of open, competitive bidding for construction contracts related to BRI projects – we expect a significant change in emphasis at this forum will be the encouragement to third-party sovereigns and private sector enterprises to participate in BRI projects (of course, this is not the same as open, competitive bidding, particularly if other sovereigns involve their own state-owned enterprises in BRI).

We may hear a reiteration of the rebuttal of homegrown Chinese criticism over the allocation of resources to international investment given tighter liquidity domestically. We may also get an update from the Chinese leadership on the state of trade negotiations with the US (beyond its previous messaging on how BRI champions the ideal of globalisation).

Since the inaugural forum in May 2017 and since its inception in 2014, BRI has become bigger in geographic scope and attracted more criticism from the US-centric geopolitical, financial and mainstream media community.

We highlight the following changes in BRI over the last two years.

In July 2017, Sri Lanka signed a 99-year lease with Chinese firms for the Hambantota port as part of a resolution (such as a 32-year tax break and 70% shareholding for the Chinese firms and an initial US$300mn cash receipt from them) for debt arrears. Most coverage of the risks of BRI for recipient countries highlight this project as evidence of the "Chinese debt trap" that underlies BRI.

In contrast, our interpretation is that this is an example of Chinese capital exacerbating the prior deficiency in Sri Lanka's political economy. The "white elephant" Hambantota port was constructed during the crony-capitalist era of the Rajapaksa government. In other words, BRI did not transform Sri Lanka, it accelerated it down the imperfect path it was already heading.

In July 2017, the IMF, in its Article IV report, mentioned that Pakistan's external vulnerabilities had increased as a result of current account and external repayment obligations associated with CPEC (the China Pakistan Economic Corridor, part of BRI). In July 2018, US Secretary of State Pompeo publicly warned that the US would not support IMF assistance for Pakistan if funds were used merely to pay off debts related to CPEC. We understand that disclosures on CPEC-related commitments required by the IMF, as a part of ongoing discussions for a loan, have been provided by the Pakistan authorities and that this specific issue is no longer an obstacle to concluding negotiations.

There is an oft-repeated concern about a lack of transparency on financing commitments and government guarantees associated with BRI agreements. The example of Pakistan, where many of the projects in CPEC have moved from a memorandum of understanding, through financial close, to actual construction, show that a good portion of this detail is available. Indeed, at the project level, much of it was always accessible on Pakistan government and electricity regulator websites. (What is not so transparent is the aggregate and maturity profile of all Chinese funding, including, for example, bilateral loans to the central bank).

Similar to Sirisena in his successful presidential election campaign in Sri Lanka in January 2015, Mahatir successfully used the issue of "unfair" China projects signed by incumbent PM Razzaq, among other issues, to lead the winning coalition in Malaysia's parliamentary election in May 2018. After initially suspending the East Coast Rail Link (one of the largest single projects in BRI) – and for many months it appeared that the project may have been cancelled altogether – the Mahatir-led government announced that a renegotiated version of the project had been agreed with Chinese authorities in April 2019. The reduction in project cost (to US$10.6bn) is in the range of 15% to 33% (depending on whether the current or previous government's figures for total project cost and scope, before renegotiation, are used).

In our view, this example demonstrates that, on the one hand, there is scope for renegotiation in order to preserve political support for BRI in recipient countries but that, on the other, the insertion of cancellation fees into the original contract may limit the scope of that negotiation.

The Trump presidency was merely a few months old at the time of the 2017 BRI forum. Since then, relations between the US and China have publicly deteriorated with, for example, reciprocal trade tariffs (the "trade war"), greater scrutiny over technology intellectual property and security (Huawei), open criticism of BRI (Italy) and an infrastructure funding response (Indo-Pacific initiative).

High-level representatives from India did not attend the 2017 forum and, we understand, are not expected this time. Since the 2017 BRI forum, geopolitical competition has persisted between these two in the South Asia region, as demonstrated by the following examples: troops from India and China have engaged in a stand-off in territory disputed by Bhutan and China at Doklam (June-August 2017); India was openly supportive of a presidential candidate in the Maldives, Solih, who defeated the China-aligned incumbent, Yameen (September 2018); China continued to oppose India's application to join the Nuclear Suppliers Group (July 2018); and China used its UN Security Council veto to block the designation of Masood Azhar (JeM) as a terrorist (March 2019).

Similar to relations with the US, at a regional-level, we expect friction on matters of defence and foreign policy to persist between China and India. Because BRI is a part of foreign policy, reactions to it from the Indian side will be coloured by this.

In November 2017, the promotion of BRI was included in the Communist Party of China's Constitution. This legally embeds BRI in Chinese foreign and economic policy beyond the era of Xi Jinping. Furthermore, in the near term, it likely enables greater influence of the central government on the implementation of BRI (as opposed to provincial government).

For recipient countries, with their political economy already pointing in a positive direction, this is a helpful change, in our view.

Our views on BRI's generic implications for frontier and emerging markets remain unchanged:

(1) The capital made available via BRI does not transform the development trajectory of a recipient country but accelerates it (i.e. a well-functioning political economy should benefit from BRI, just as a poorly functioning one likely suffers).

(2) BRI projects focused on infrastructure are likely much more useful for the broader economy than historic investments from China (or Western sources) in resource extraction.

(3) BRI investments, like most investments under a sovereign umbrella, are embedded in a geopolitical context and the recipient countries are likely to be exposed to a risk of geopolitical reaction from China's global rivals (e.g. the US, Japan, South Korea, India in particular, and the EU, Australia and Canada to a lesser degree).

China's BRI: not a Marshall Plan or an East India Company, January 2019 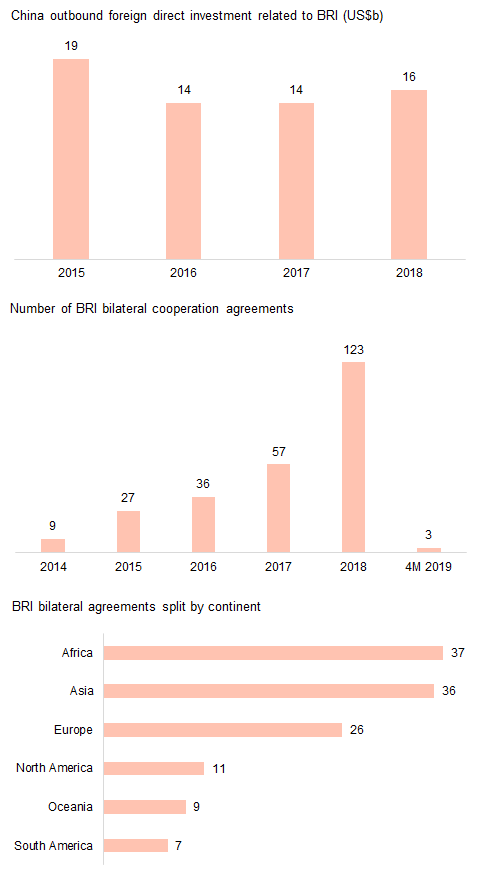