China: What happened to Hu?

Almost all of the China Communist Party Congress went according to expectations. But five minutes during the closing ceremony on 22 October that seemingly did not and that segment provides the abiding memory of the two-week event. 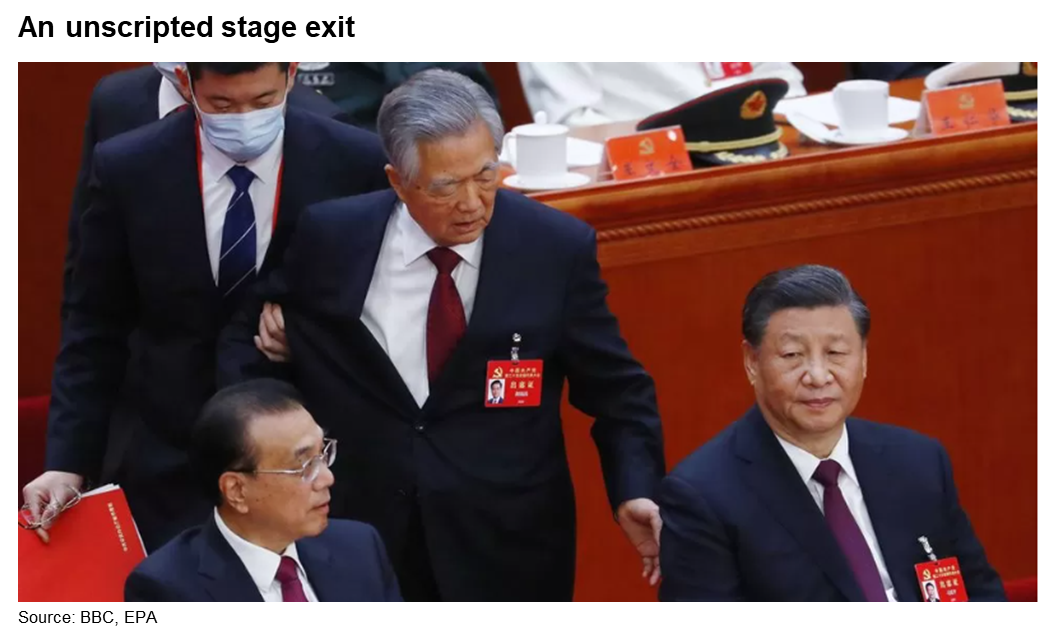 Everyone expected President Xi Jinping to secure a third term at the helm of the Communist Party at its Congress over the last two weeks.

Everyone expected his top team to be staffed with loyalists.

Everyone expected a well-choreographed display of unity.

There was more emphasis on security, homegrown Tech innovation and Taiwan, compared with economic reform and global integration. But this was not tantamount to a pivot in policies.

However, no one expected the apparently chaotic scene of Xi’s predecessor, Hu Jintao, being escorted off stage.

No one, frankly, has a clue what to make of it:

And, when no one knows the truth, the result is sometimes to interpret in a way that reinforces existing views.

For China sceptics, this was evidence of rumblings over any or all of the following:

Whereas for China bulls, this incident was a trivial moment of drama amid a Congress where all matters of substance proceeded as expected.

And, even if this was the result of a high-profile public protest, it does not alter the direction of policy under President Xi and his new top team of loyalists.

Indeed, if this was a demonstration of the concentration of power in Xi and his loyalists, it may mean that policy can be executed quickly or, in the event that it is the wrong policy, it can be rectified quickly.

For China neutrals, this incident will reinforce the sense that all important discussions and decisions take place behind closed doors. There is no visibility on the process, only observable outcomes. And those outcomes may trend positively or negatively. Assessments of China, for this group, are made by looking at the rear-view mirror.

For ESG and ethics fundamentalists, this incident is another reminder of an autocratic regime where the concentration of political and economic power overwhelms all investment considerations.

Our view: A cheap underperformer

There is no visibility on debate leading up to policy formulation but there is clarity on the outcome: Xi, his loyalists and the party are the first priority, social stability and national security second, growth and financial independence third, and foreign relations and foreign capital to the degree it supports the preceding three priorities.

This hierarchy is not that different from countries, both in developed and emerging, which are both more democratic and offer more visibility on decision-making.

China has long since fallen out of favour of the consensus of emerging market investors and this is reflected in its deep discounts to its historical average valuation. 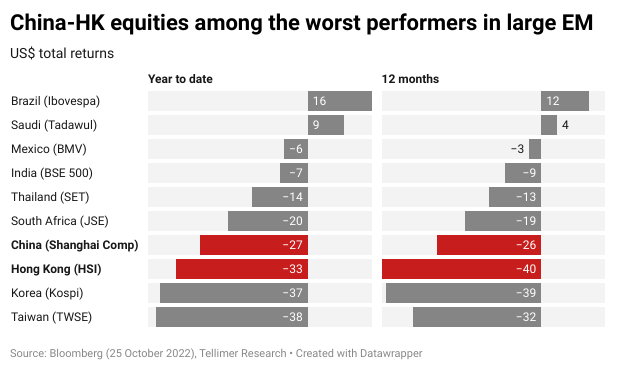 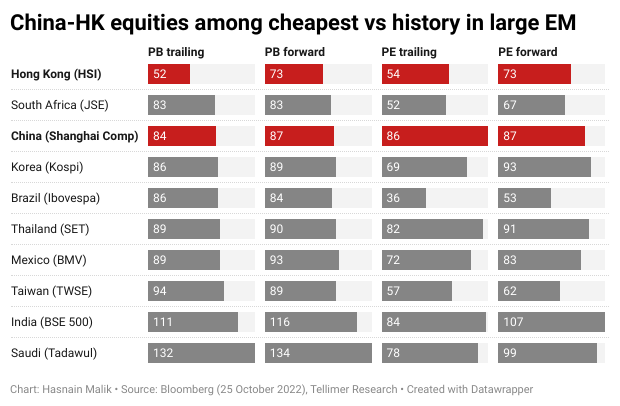 The HSI in Hong Kong and the Shanghai Composite in mainland China are on c50% and 25% discounts to their respective five-year medians on trailing price/book.

That discount is now large enough to prompt a revisit of the enduring strengths of the investment case – China’s scale in global manufacturing is irreplaceable, exports continue to grow despite ongoing US tariffs, China's representation in global equity indices remains far lower than its share of global market capitalisation or GDP – and the things that might go well – zero-Covid policy should ultimately relent, and a zero real interest rate implies capacity for policy stimulus.

That discount is also large enough to consider what might go wrong in those alternative large emerging markets that have outperformed China, are valued nearer or at a premium to their historical average valuation, eg India or Saudi Arabia, less so Brazil, where there are risks but valuation remains cheap even after this year’s outperformance.

From an investment perspective, we take China as it is, rather than as we or others might wish it to be. The ethical qualms of investing in an openly autocratic political system are genuine, of course, but they also exist in countries where democracy is insufficiently competitive and merely a veneer for dominant vested interests. And there are plenty of examples of those in both developed and emerging markets.