China has a political model, centred around a president and a one-party state, wielding concentrated power in a highly heterogenous, fragmented, unequal, and massive country, where that president and party survive only if they are pre-eminent.

China is therefore prepared to nakedly subjugate its private sector corporates for the “public good”, as defined by the president and the party. Its actions in the Tech sector are a testimony to this.

That political model is not new but the consensus active emerging market equity investor (not to mention the blind passive investor, who has learned to ignore that fact, as Chinese corporates, particularly its Tech companies, grew to such an extent that they did not take centre stage so much as almost upstage the emerging market equity index) has now received a stark reminder.

Hence, there is currently a sense of panic over the outlook for China Tech equities, the leading sector in the largest country weight in emerging markets (c35% of MSCI EM). 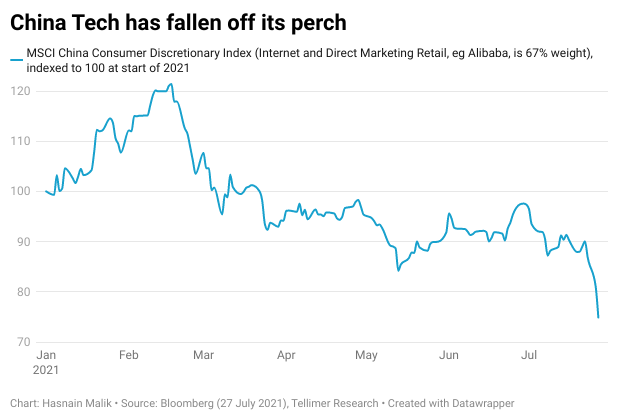 In turn, there is concern over where the rights of independent providers of capital across debt and equity, particularly foreign ones, and across all sectors, rank in the hierarchy of "public good" as defined by the Chinese leadership.

But China has not killed capitalism. It still needs private capital and investors in publicly traded securities. Indeed, it needs these Tech companies to continue growing, albeit within the red lines it now draws.

Regulatory interference, or lack thereof, according to the competence and whims of government, and the electorate or vested interests that they serve, are a feature of all capitalist economies. There is no such thing as naked capitalism, or a totally, unfettered free market anywhere globally, apart from, perhaps, the undocumented economy.

What makes Chinese capitalism so different is the speed with which the government can so comprehensively change regulatory policy without any change in the government itself. In democratic capitalist economies, there are usually leading indicators for policy pivots in public debates and elections. In autocratic regimes, there are clues sometimes around succession for key jobs in the policy elite. But in China, the information of this sort that investors have to work with is scarce.

The purpose of this note is not to champion the case of China Tech above all other public equity alternatives but rather to provide a reminder of the serious risks also present in those alternatives. For those able to last the distance, the current bout of despair may prove to be an opportunity in China Tech.

In pockets, China Tech looks relatively attractively valued compared to US Tech, particularly as regulatory scrutiny in the US intensifies, and is not necessarily laden with more long-term investment risk than other parts of the EM equity universe, such as Korea-Taiwan Tech Hardware, India, Commodity exporters (Brazil, Russia, Saudi and South Africa in large EM), and small EM-Frontier.

China's regulatory actions on its Tech sector are a result of the long-term threat to the control enjoyed by President Xi Jinping and the Communist Party in all policy spheres.

Preserving the dominant position of both President Xi Jinping and the Chinese Communist Party, executing the economic transition from exports and state-led infrastructure investment to domestic consumption, and, even, prosecuting parts of foreign policy require co-opting the tools and data of Big Tech and the loyalty of its quasi-celebrity founders.

'Super apps' such as Alibaba offer single portals to a wide range of digital services such as chat, payments, gaming and entertainment, banking (fintech), healthcare, transport, and e-commerce. Exerting control over these super apps allows the authorities, in turn, to control information and views (social control and surveillance), systemic financial risk, physical security risk (cyberwarfare), and, to a degree, implement foreign policy (via the soft power embedded in the international operations of these super apps).

These regulatory actions include the following:

US Tech regulation may not be so different

A large discount has opened up in the valuation of parts of China Tech compared to US Tech, whether on the basis of forward PE or PE relative to recent history. This discount could widen until we start to see similar regulatory controls imposed on the leading US super app companies.

Given the much slower legal (and lobbying) process in the US, this may take a long time but there is no doubt the tone on Big Tech from US legislators and the US administration has materially changed to a more negative one over the past year: 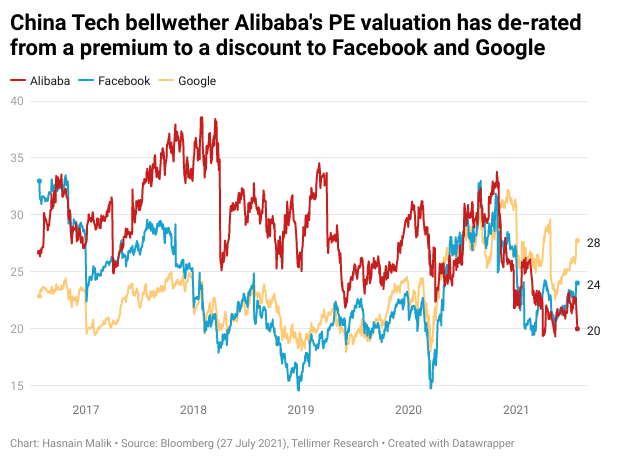 For EM investors, China Tech's fall from its perch may encourage a shift by active investors to Korea-Taiwan Tech, India or Commodity exporters Brazil, Russia, Saudi and South Africa in large EM, or to small EM and Frontier markets. And this may be exacerbated, or, indeed pre-empted, given the magnitude of share price falls already seen, by passive flows.

However, alongside their attractive qualities (which we have covered many times elsewhere), each of these parts of the EM universe carry their own material risks, with potential catalysts to focus the market’s attention on them never far away: 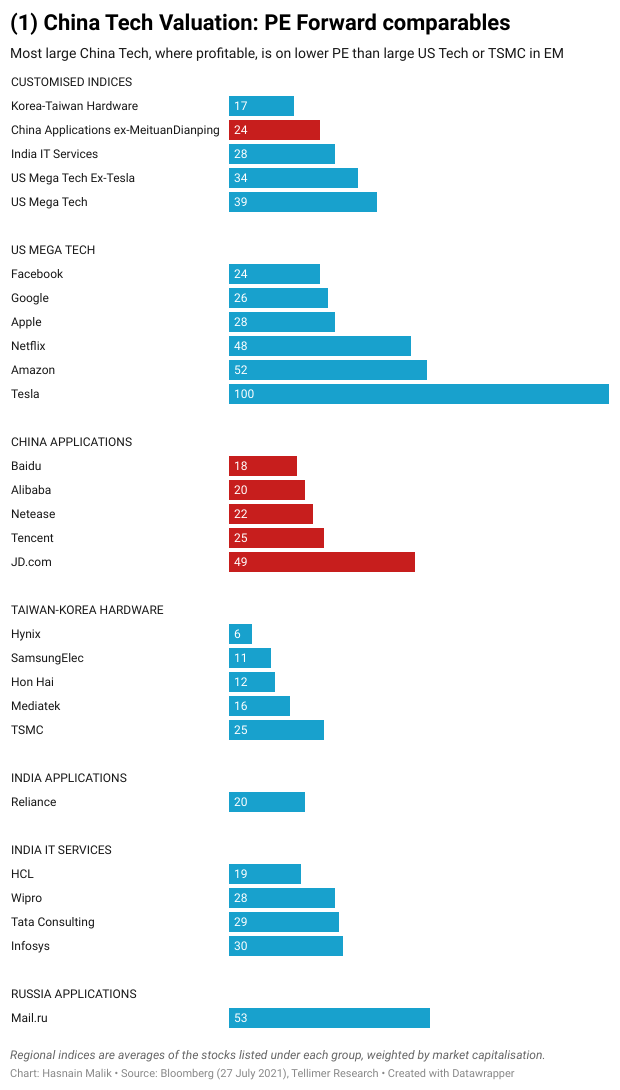 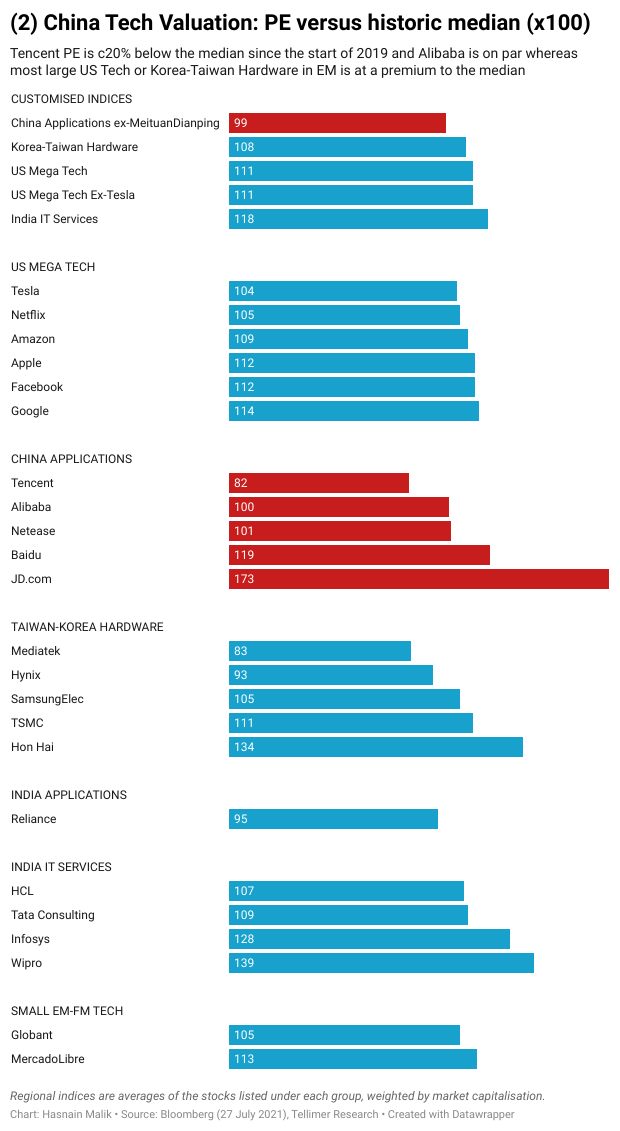 Google anti-trust implications for mega Tech and EMs in its shadow, October 2020

US weaponises all Tech regulation in China friction, EM Tech in the cross hairs, August 2020