In China, today's weak data on monthly industrial manufacturing, retail sales and asset investment, as well as the policy rate cut, were unexpected. They serve as a reminder that the pick-up in growth remains a stuttering one. But they do not alter the top-down investment case. The economy is still recovering, albeit at a slower pace than forecast for July, and the capacity for policy stimulus remains.

The short-term tension in the China investment case remains between the rare capacity for policy stimulus (real interest rates are zero, gross government debt is below 80%, and total external debt is below 15% of GDP), on the one hand, but less benign domestic (zero-Covid strategy, property slump, regulatory crackdown on Tech and other sectors) and external (recession and inflation risks in export markets, geopolitical friction with the US) conditions, on the other.

The long-term tension remains between unmatched global scale in manufacturing capacity and an under-owned equity market (relative to the size of the economy), on the one hand, but population decline (which drives up Chinese wages), an increasingly less liberal and fragmented global trade system (which drives diversification of supply chains away from China), the enduring juxtaposition of private shareholder value and statist economic policy, and key person risk around 69-year-old President Xi Jinping, on the other.

China equities, measured by Tech-heavy MSCI China or the A-share-only CSI 300, are down 20% ytd in total US$ return terms. The local Shanghai Composite has fared better but is still down 13%. These declines are similar to those seen in large EM alternatives Korea (down 22%) and Taiwan (down 19%), but significantly worse than India (down 4%) or Brazil (up 18%).

The valuation of Chinese equities has re-rated upwards since the depth of zero-Covid lockdowns in April. Yet, relative to history, valuation still does not look stretched. Forward PEs of MSCI China and the Shanghai Composite is at 10% discounts to respective 5-year medians, and for the CSI300 this metric is at par.

China is by far the biggest country allocation decision for an EM equities fund. Its weight in the MSCI EM index is about 30%. India, Korea, and Taiwan are all in the range of 12-15% and Brazil, Saudi, and South Africa are in the range of 3.5-5.5%.

Our view on China remains a positive one and China tops our EM Country Index. The long list of risks make the story imperfect, but at least those risks are well known and, to a degree, valuation multiples reflect them.

The negative net foreign flows into Chinese equities year to date imply that foreign portfolio managers generally do not share this view.

We certainly admit though that we would have hoped to see a faster pick up by this point in the year — or, at least, equity market catalysts in form of a systematically less heavy-handed approach to Covid, or more defined policy stimulus bazooka.

From a relative portfolio perspective, the alternatives for such a large allocation in an EM fund also have their own material risks (eg Taiwan security, Korean care for minority shareholder value, India's authoritarianism and valuation premium versus history, Brazil and South Africa's fiscal reform morass, Saudi's key commodity and key person risk).

Below we update the 10 charts we use to illustrate our top-down views on China and our summary table of investment positives and risks. 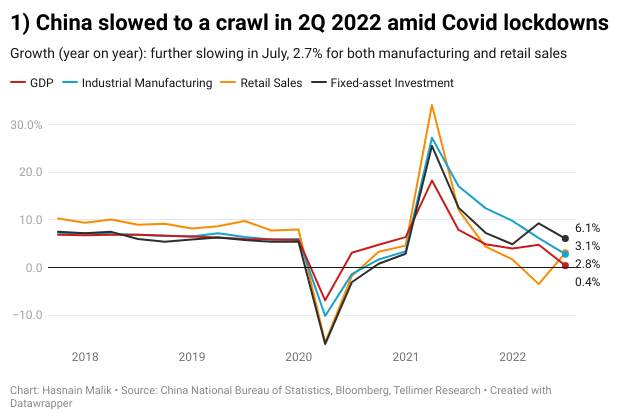 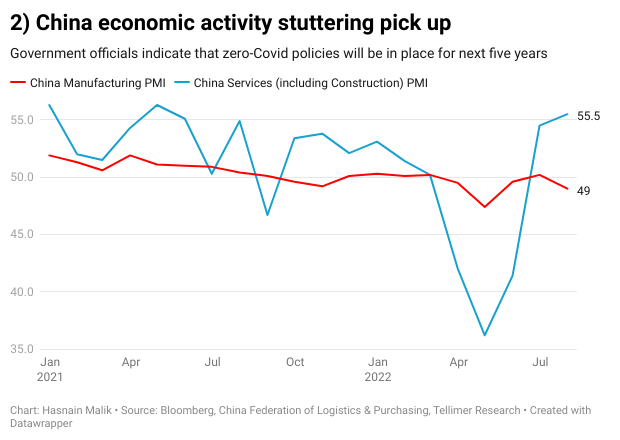 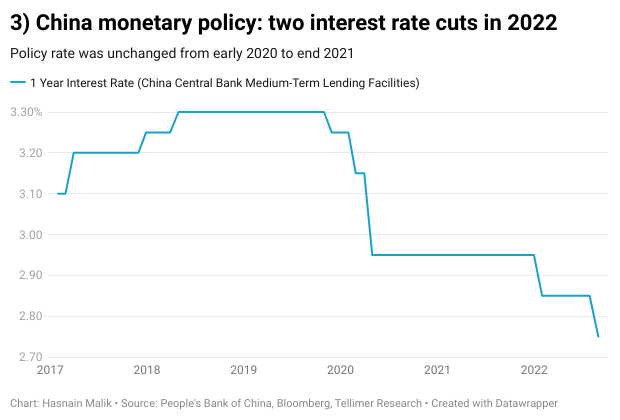 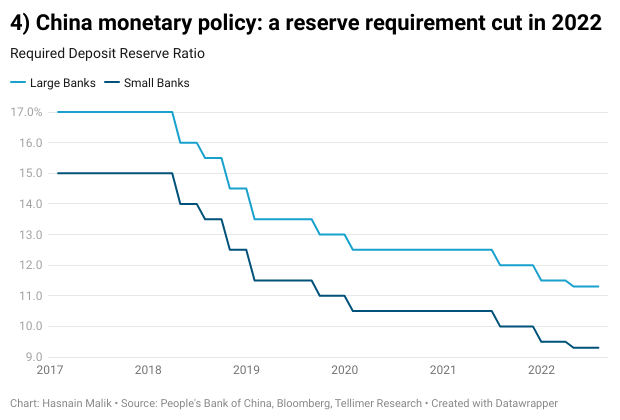 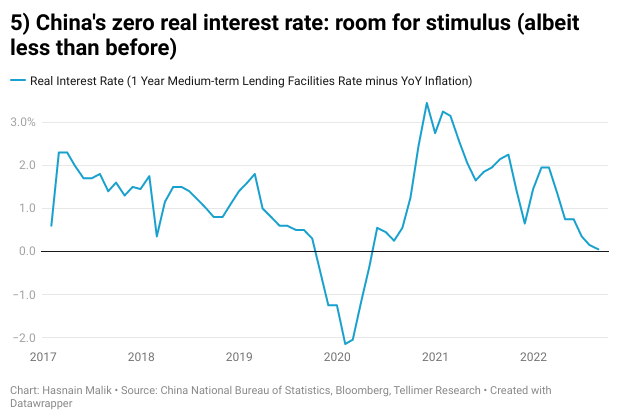 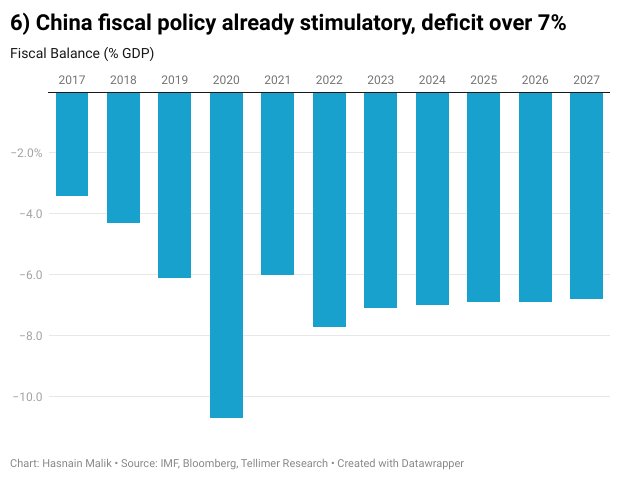 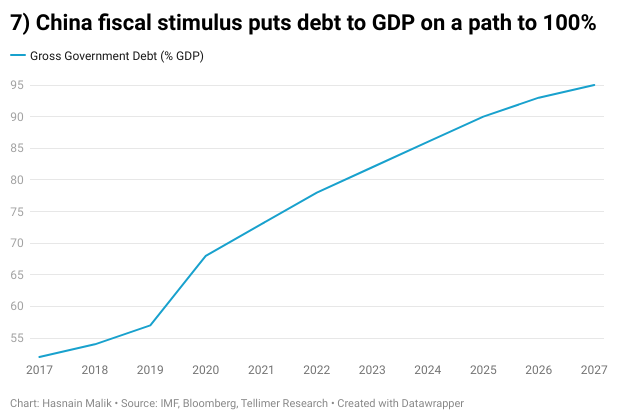 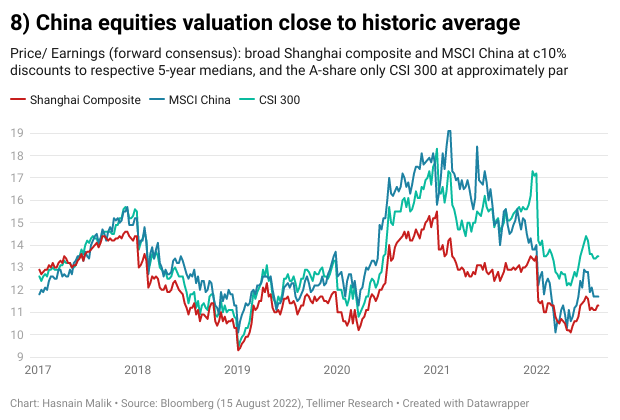 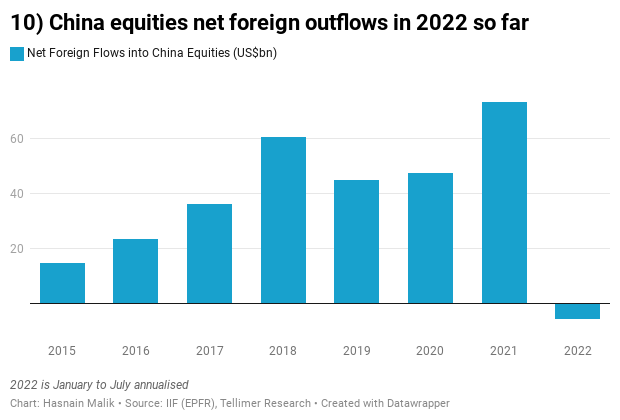 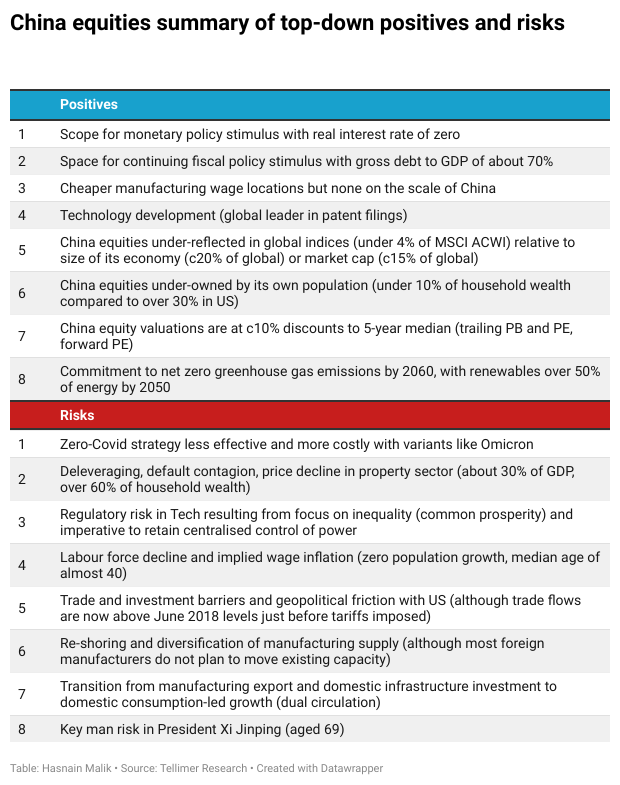