As the Omicron variant continues to permeate the global economy, the Biden administration again urges vaccinations and booster shots to those more vulnerable. Although it remains unclear whether this variant causes more severe disease, the WHO has listed the variant as a cause for concern. The US has shut its borders to the Southern African region, where the variant is thought to have mutated. However, it is far from clear this is the case with other infections discovered in other countries where no contact with southern African people has been reported.

A dip in US Treasury yields ensures that the USD will not surge significantly stronger just yet. The USD has already appreciated a great deal in a short time and expectations that it may struggle to surge significantly further without further news of the Omicron variant being a real threat to healthcare systems. At this point, all signs are that the Omicron may be infections but only causes mild symptoms. The world awaits confirmation from scientists and researchers. Their findings will hold implications for the USD.

Angola: While inflation in Angola remains particularly robust, it is widely expected that the central bank will keep rates on hold at its meeting today. Recall that the Bank of Angola hiked rates aggressively earlier this year to curb inflation. Policymakers will want to see how the massive rate hike earlier this year and the measures by the government to curb inflation play out. The government introduced a raft of measures, including lowering sales taxes and temporarily suspending import duties to ease consumer price pressures. That all said, given just how robust inflation is in Angola, we do see the risk for further policy tightening.

Southern Africa isolation: Following the announcement of travel restrictions from a number of countries to Southern Africa after the discovery of the omicron variant, UN Secretary-General Antonio Guterres said on Monday he was deeply concerned about the isolation of southern African countries. Guterres said, "I appeal to all governments to consider repeated testing for travellers, together with other appropriate and truly effective measures, with the objective of avoiding the risk of transmission so as to allow for travel and economic engagement." Guterres added that "the people of Africa cannot be blamed for the immorally low level of vaccinations available in Africa – and they should not be penalised for identifying and sharing crucial science and health information with the world."

COVID-19: President Xi Jinping said on Monday that China would deliver another 1bn doses of COVID-19 vaccines to Africa and encourage Chinese companies to invest no less than $10bn in the continent over the next three years. As it stands, China has already supplied nearly 200mn doses to Africa. President Xi said 600mn doses would be donations and 400 million doses would be provided through other means such as joint production by Chinese companies and relevant African countries. China will also build ten health projects in Africa and send 1,500 health experts, he said. The announcement comes amid mounting criticism over China's infrastructure-for-commodities deals that some experts say saddle countries with unsustainable debt.

Intra Africa trade: Nigeria and other African countries sealed trade-related investment deals worth $42.1bn at the recent Intra-African Trade Fair. The fair organised by Afreximbank, the African Union and the African Continental Free Trade Area Secretariat saw 500 business deals being concluded. The organisers noted that IATF 2021 thus surpassed its pre-set target of $40bn in trade and investment deals, going well beyond the $32bn in transactions closed at the first edition in Cairo, Egypt in 2018. Despite the uncertain environment arising from the COVID-19 pandemic situation, IATF 2021 attracted exhibitors from 59 countries, of which 46 were African countries.

Zambia: Timing of the Zambian airlines 1 December launch could not have been worse as travellers will look to postpone any non-essential travel as the new variant remains an unknown. Ethiopian Airlines and Industrial Development Corporation Limited will be shareholders in the new venture with 45% and 55% of the shareholding respectively. The shareholders have thus far committed USD30m in capital to the endeavour and will initially start with a domestic flight between Lusaka and Ndola and Ndola and Livingstone with a frequency of six and five times per week. It is envisaged that the airline will expand to other domestic destinations namely Mfuwe and Solwezi before introducing regional destinations, to Johannesburg and Harare, to its network within the first quarter of 2022.

Mozambique: Chinese State Councilor and Foreign Minister Wang Yi and Mozambican Minister of Foreign Affairs and Cooperation Veronica Macamo pledged to strengthen mutually beneficial cooperation between the two countries. Wang said that Mozambique is an important partner of China in Africa. The Foreign Minister added that China attaches great importance to the development of China-Mozambique relations, and stands ready, under the guidance of the important consensus reached by the two heads of state and taking the meeting as an opportunity, to promote the comprehensive strategic cooperative partnership between the two countries to achieve greater development, said the senior Chinese diplomat.

In line with expectations, policymakers in Kenya voted to leave the benchmark interest rate unchanged at 7.00% for an eleventh consecutive meeting on Monday. In its statement, the monetary policy committee said that inflation is expected to remain within the bank’s target range in the near term. The committee added that Kenya’s economic recovery from the COVID-19 pandemic remains robust. 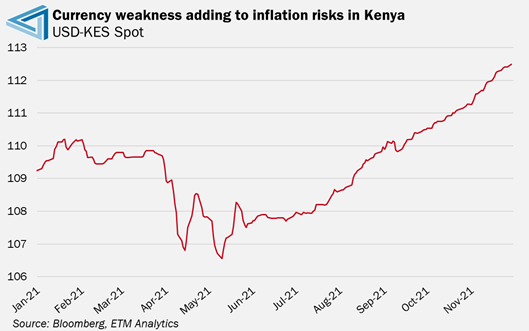 Central bank Governor Patrick Njoroge said that inflation “expectations remained anchored within the target range and leading economic indicators showed continued robust performance.” Recall that headline inflation in Kenya slowed for the first time in six months in October, decelerating to 6.5% after the government made use of the stabilisation funds to lower fuel prices.

On the growth front, Kenya’s economy recorded its fastest pace of expansion in more than two decades in Q2. The outlook for the economy remains bright, with growth expected to remain strong as the economy is reopened and supply chain constraints are eased. That said, risks to the outlook remain to the downside. Inflation risks are acute as the slide in the currency persists. Meanwhile, drought and the reemergence of a locust outbreak could push up food prices. As such, we do see the risk for policy tightening in the months ahead.

Emerging market assets suffered a large withdrawal of funds last week as a double-edged sword of a new coronavirus variant and prospects of a faster pace of monetary policy tightening in the US weighed on risk appetite. Data published yesterday afternoon by Bloomberg showed that investors withdrew$854.1mn from exchange traded funds that buy emerging market stocks and bonds last week, ending a six week run of inflows.

A breakdown of the data showed that bonds suffered the hardest hit last week with bond ETFs falling by $640.2mn amid fears that the renomination of Federal Reserve Chair Jerome Powell would lead to tighter monetary policy than what was previously expected by the market. Last week the market was pricing in the first rate hike in June 2022. Stock ETFs meanwhile contracted by $213.9mn as investors rotated to haven assets.

Going forward, while the sharp drop in international oil prices and renewed growth concerns will provide some reprieve for emerging market bonds, global risk sentiment remains weak amid all the uncertainty pertaining to the Omicron variant. Therefore, we are likely to see the bearish bias in emerging market assets persist this week.

The question that we have been asked is whether or not the Omicron variant has the ability to unseat the economic recovery and thus place base metals on the backfoot as we exit 2021. The answer to that is it is all dependent on how the authorities behave and how quick the scientists give a definitive answer as to its mortality. For countries where the vaccination rates are high, the morality figures are likely to be low, the virus may be more transmissible but those that have been previously vaccinated are likely to experience mild symptoms.

In the near term broader question is how the lockdowns will affect supply chains and logistics. Logistics chains are already stretched and this adds another level of complexity to an already impossible environment. This is likely to make price action volatile as investors assess the impact on both the supply leg as well as demand as ports battle to clear the backlog.

Longer term we remain base metal bulls with the decarbonisation and infrastructure spending projects underpinning demand. These are broader macro and structural factors which are baked in given their legal legitimacy. Those metals that are used in green technology, such as copper, are expected to outperform over the longer term.