China's manufacturing base is simply too big to replace but the catalysts of US-China friction and Covid-19 provide an opportunity for India, in particular, and others in Asia to erode China' share.

In this report, we explain why Asia is full of more likely competitors than other regions and try to determine a ranking within Asia.

The metrics we use appeal to the varying priorities of investors in manufacturing capacity: large scale and low cost, higher technology, and governance (more stringent ethical standards).

Our manufacturing competitiveness scorecard for the region weights 10 of these metrics and is summarised in the chart immediately below (we provide details of the inputs into the scorecard at the end of this report).

China’s manufacturing is too large to be replaced

China is dominant in manufacturing, with almost 30% global share, which is roughly:

Given its sheer scale in manufacturing, talk of individual countries, even of the potential manufacturing size of India, replacing China is fanciful.

This is even before one considers China's ability to flex its currency via devaluation or its geopolitical muscle and its defence against domestic wage inflation via increased installation of automation (industrial robots).

Nevertheless, its manufacturing market share can be chipped away, particularly given the increased US-China friction and the disruption from Covid-19.

India has low manufacturing contribution to GDP and high unemployment. But it is finally industrialising, evidenced by rising FDI and robot installation. Although there is hype around government initiatives, eg “Make in India” and “Invest India”, the improving ease of doing business, increasingly accessible consumer base and closer geopolitical alignment with the US are enabling factors.

It is perhaps no accident that India and China are increasingly butting heads on their shared Himalayan border and that China remains fully committed to its expansion of influence in Pakistan via the CPEC branch of the Belt and Road Initiative.

The other Asian challengers

Among the other larger manufacturers, Japan and South Korea are the most attractive for those driven by advanced technology or stricter ethics.

Among the smaller manufacturers, Singapore (for technology and ethics) and Vietnam (all round) are the most attractive.

Pakistan should be doing much better, and perhaps its improvement in governance and infrastructure will soon bear fruit. Bangladesh has perhaps done better than might have been expected but this is put at risk by business-unfriendly government policies and an overvalued currency.

To the degree that the manufacturing strategy of Bangladesh, Pakistan and Sri Lanka is heavily reliant on low wages, it is threatened by the emergence of Cambodia and Myanmar in Asia and, further afield, Ethiopia in Africa, as well as the rise of automation.

(We intend to address the risks and opportunities for emerging markets from manufacturing automation in a future report.)

US-China friction has already driven higher tariffs on China and may lead to potential restrictions on cross-border capital flows into China. Both candidates in the US presidential election identify China as a threat (the difference is that Trump prefers unilateralism whereas Biden promises multilateralism).

Covid-19 disruption has acted as a reminder of the need for redundancy in the supply chain and less geographic concentration, particularly in China. Instead of 're-shoring' manufacturing back to expensive locations, which is not in the interest of any profit-maximising multinational unless it is offered subsidies to offset higher costs, diversifying to other competitive locations is more likely.

Why we focus on Asia: Low wages, existing supply chain

In this report, we focus on the challengers to China’s manufacturing in Asia.

We construct a nominal global manufacturing wage cost curve using (mainly) 2015 data from the ILO and adjusting it for cumulative currency and inflation changes thereafter. Wages in the lower cost part of Asia are almost unrivalled globally (the exception is East Africa, eg Ethiopia).

Furthermore, supply chains are already clustered in the region and shipping routes (and associated port infrastructure) are well established. 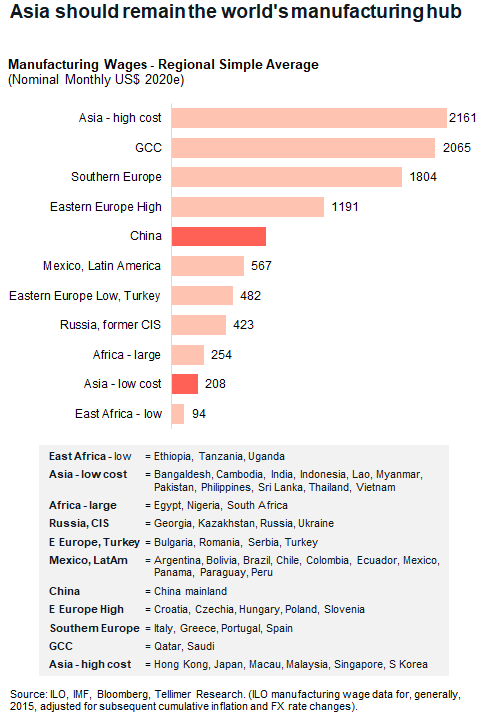 We consider and chart the following metrics: 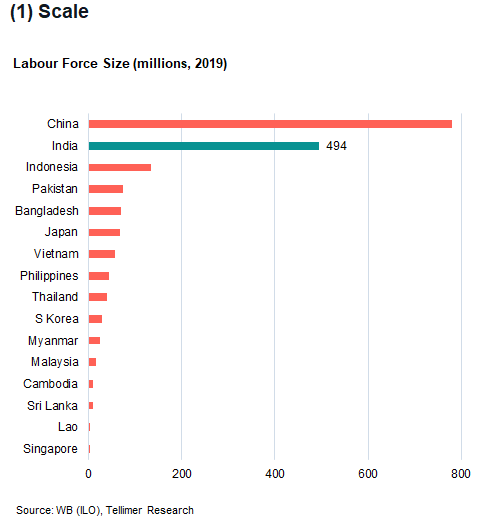 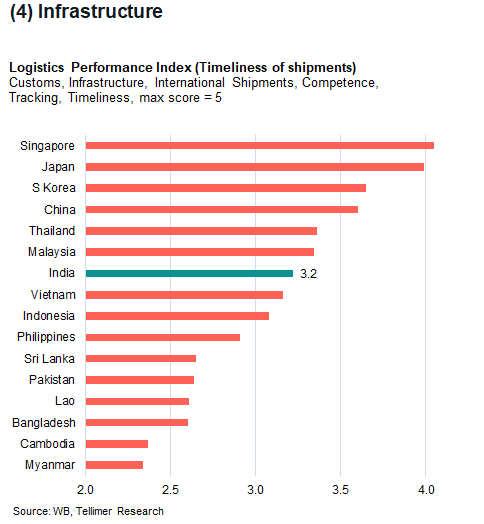 We construct a manufacturing competitiveness scorecard (the results are illustrated in the chart at the top of this report) with varying weights for these metrics to reflect the varying priorities of investors in manufacturing: 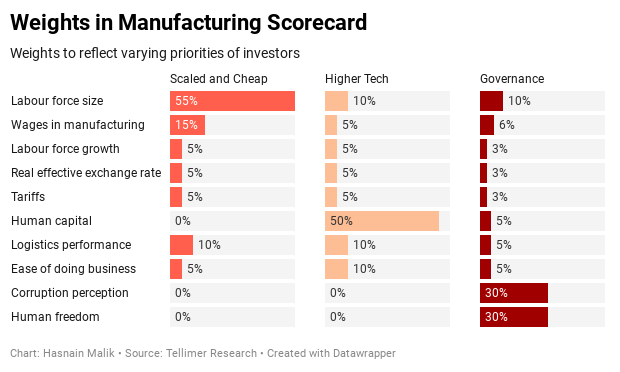 The thesis in our report is that US-China friction and Covid-19 disruption will act as catalysts for loss of manufacturing market share by China to its challengers in Asia (much more than to those elsewhere globally, mainly because of lower wage costs and existing regional supply chain infrastructure) and that the prospects of individual countries attracting manufacturing investment is dependent on factors such as scale and cost, receptiveness to higher technology, and ethics.

There is clearly some overlap with literature available elsewhere and below we pick out the highlights from three recent reports from very well recognised third parties: the United Nations Conference on Trade and Development (UNCTAD), Kearney and the World Economic Forum (WEF). However, the scope of their reports is different (global rather than Asia alone, all sectors rather than manufacturing alone, and, in the case of WEF, total factor productivity rather than capital and labour).