China and the risk of contagion

Risk of a Chinese economic fallout exists but is unlikely

Concerns amongst the international investment community are mounting that Evergrande's liquidity crisis and possible default could lead to a domino effect on other major Chinese developers. This has the potential to result in China's own "Lehman Brothers" moment as the collapse of Evergrande could lead to a systematic spillover to other parts of the economy.

The uncertainty surrounding the Evergrande situation has triggered a rotation into haven assets at the start of the week, as investors brace for what could be a watershed moment for global financial markets. A major test comes this week, with Evergrande due to pay $83.5mn in interest relating to its March 2022 bond on Thursday. The Chinese property giant also has another $47.5mn payment due on September 29 for bonds maturing in March 2024. Both bonds will default if Evergrande fails to settle the interest within 30 days of the scheduled payment dates.

While Evergrande has the potential to hit the broader Chinese economy, given the shift to an even more socialist policy stance, we see it as unlikely that the government will let the company fail. The most likely outcome will probably be nationalisation given the fact that Beijing will want to save workers interests but will not be keen to be seen supporting the rich with a "bail-out." That said, until there is clarity on what role the government will play, all the uncertainty will result in a cautious bias across global markets.

There has been a flight to safety across global markets at the start of this week as investors fretted about the spillover risk to the global economy. It is worth noting that Chinese demand risks are not isolated to just the property sector, with several high-frequency economic measures and government clampdowns in various other sectors raising concerns about the outlook for China. 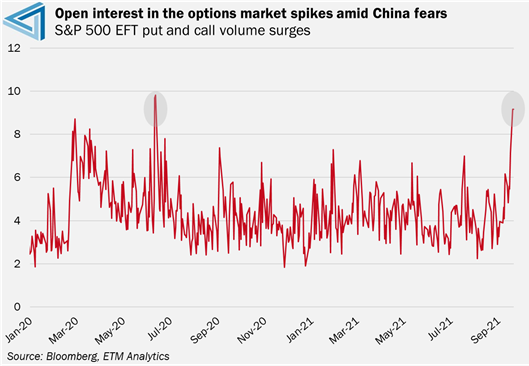 This comes on the backdrop of uncertainty about the path for global monetary policy ahead of the BoE, BoJ and Fed rate decisions this week. The VIX volatility index that tracks short term options prices on the US-based S&P 500 legged higher on Monday to levels last seen in May, suggesting that the market is linking some serious downside risk to the potential implosion of the Chinese property market. 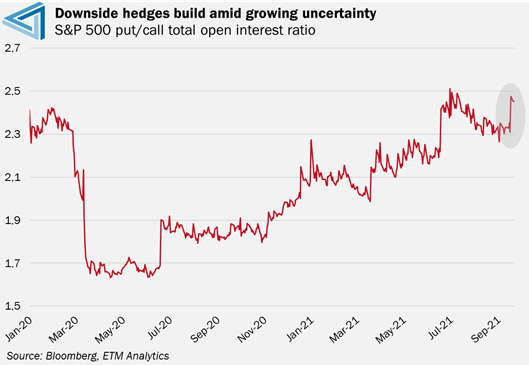 The concern at this stage is not for a Lehman-style meltdown but rather a slowdown in Chinese demand. China has also been reducing factory output and smelting activity to improve air quality ahead of the Winter Olympics next year and clamping down on key sectors that will add to the headwinds the economy faces. This will be adding to the ZAR's woes as terms of trade and global systemic risks increase. Note that much of the ZAR's resilience this year has been underpinned by SA's favourable terms of trade and current account viability. Therefore, if the Evergrande debt saga leads to a material decline in Chinese demand for SA goods and services, a large chunk of the ZAR's resilience could be eroded. 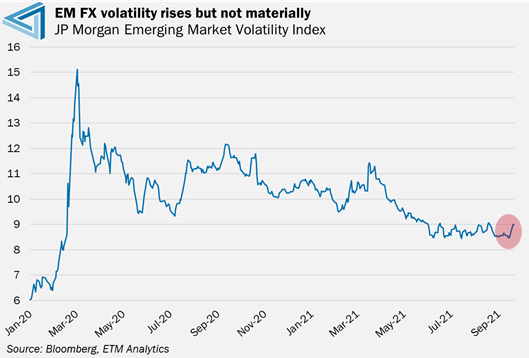 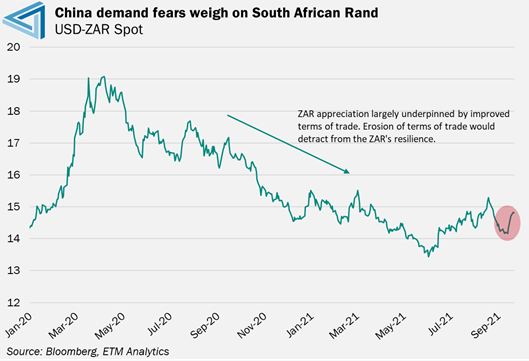 Risk-off driving base metals in the short term

The fall out in the base metal markets has been of a tactical nature and related rather to the risk-off trading dynamics than actual concerns about a fall in demand should Evergrande fail. That said, China remains the driver of ultimate price action in many of the base metals at the moment. Beijing remains committed to smoothing out price spikes by auctioning off state reserves when needed. Equally, the Chinese administration has curtailed smelting operations to support carbon reduction programmes, which has hit iron ore prices hard. 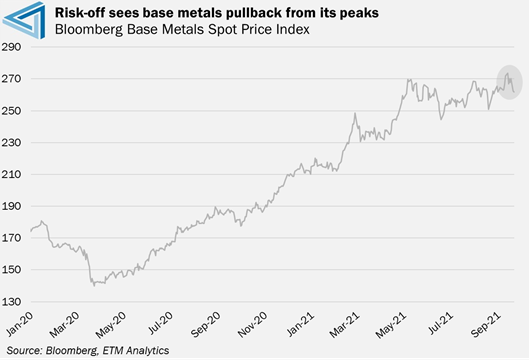 For now, we don't see any systemic risk for the global economy from the Evergrande situation. That said, there doesn't need to be any systemic risk in order for markets to be affected, given how fragile global financial markets are at the moment. Chinese authorities have the means and the will to avert a full-blown credit crisis. They will not be afraid of the potential moral hazard it creates, turning this potential disaster into a LTCM-like "Minsky" moment rather than a replication of what happened with Lehman Brothers in the US. The bigger picture, therefore, suggests that contagion from what ultimately happens at Evergrande will be contained. That said, this should be viewed as an opportunity to reassess the risks emanating from a possible slowdown in Chinese economic growth, which will have a notable impact across global asset classes and lead to an erosion of some of the ZAR's resilience that it has built up in recent months.