China and India scuffle in the Himalayas again: Fiscal deficit risk for India

Military friction between China and India in the Himalayan region renewed around the disputed borders separating the two countries on 9 December, shortly after India's Armed Forces Flag Day on 7 December.

The confrontation took place in the Tawang sector, the birthplace of the sixth Dalai Lama, in Arunachal Pradesh state, to which both China and India lay claim. This is part of the broader Himalayan region where the two have fought each other in 1962, 1987, 2017, and 2020.

We expect intermittent skirmishes to continue, rather than a hugely expensive war. However, given the scale of the protagonists, any potential between the two merits attention. 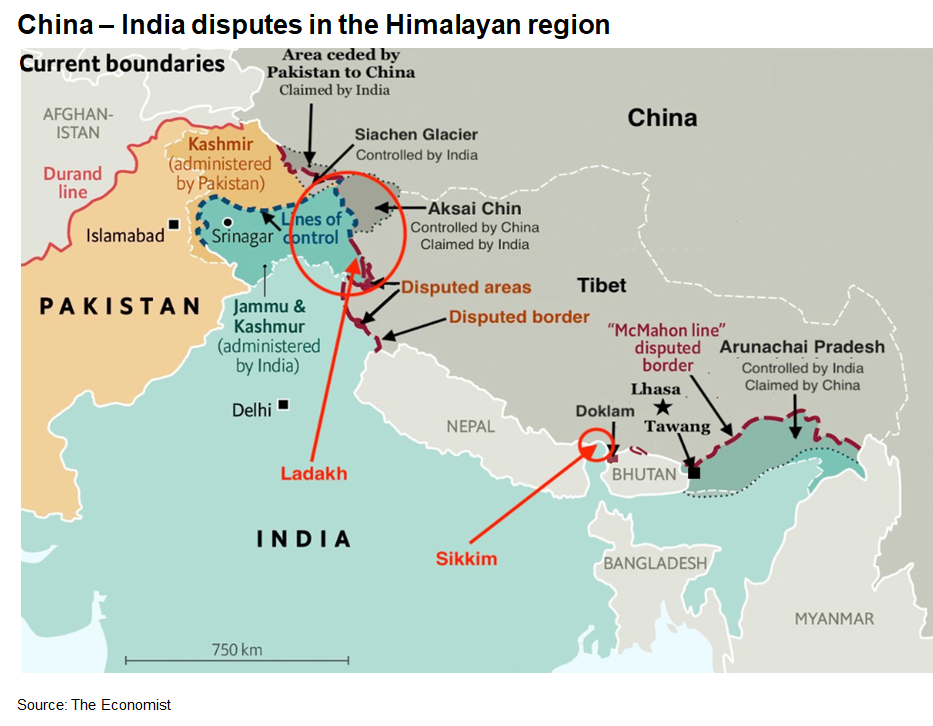 The main near-term impact is further pressure on military spend in India at a time when its fiscal deficit is about 10% of GDP. In particular, the efforts to rein in military staff costs, which triggered the Agnipath protests in June, may be compromised.

There is likely no impact on domestic political risk given that, in advance of the 2024 general election, PM Modi and his BJP face a divided opposition bereft of leadership at the national level.

For China this provides another source of tension with the US, which is aligned with India despite the latter's reticence over criticism and isolation of Russia, but not to a material degree — this geopolitical risk and the widespread awareness of it is already high. 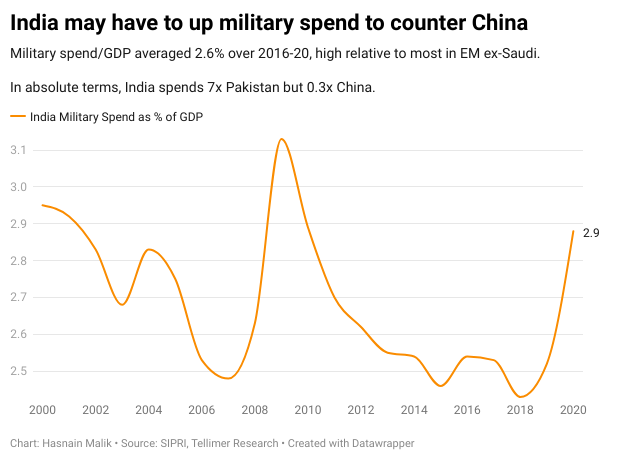 Context for this Himalayan conflict

(1) Skirmishes and tension, not war

An extensive, full-blown war is extremely unlikely: both sides have far more to lose (economically) than to gain (in terms of territory).

Nationalism plays a big role in the rhetoric of the leaders of both China and India, and both have demonstrated their ability to forcibly quell domestic dissent, but their political legitimacy is ultimately dependent on delivering economic growth.

Nevertheless, both sides have crept closer to each other's territory as the buffer-zones around their land border (left behind after the British withdrawal from the region over seven decades ago) have effectively shrunk (because of greater infrastructure development on both sides) and as their rivalry extends across the region (with both competing for influence and control in Afghanistan, Bangladesh, Iran, Maldives, Myanmar, Pakistan, Sri Lanka, and Vietnam).

Arguably, India has more to lose from any spillover of military tension to trade tension.

(Foreign direct investment flows between the two are comparatively trivial.)

India spends substantially less on military defence, both in absolute US$ terms and as a percentage of GDP, than China.

Similar to domestic political pressure in India seen after previous episodes of tension with China, there may be calls to raise military expenditure significantly.

(4) Another potential trigger for US capital restrictions on China

If China-India tensions escalate, they could act as a catalyst for US policies that target trade and capital flows to China.

The US is obviously much more closely aligned with India and tension between China and India is yet another node of broader US-China conflict – trade tariffs and blocs, technology standards and access, influence in multilateral organisations, restrictions on capital flows, Taiwan, 9-Dash line territorial disputes with Malaysia-Philippines-Vietnam, and the treatment of Uighurs.

A generation ago in 1987, China and India squared up to each other across their Himalayan border, two and a half decades after a full-blown but brief war. Those same tensions, left unresolved after 1962, 1987, 2017, and 2020 are flaring up yet again.

In 1987, the total military spending of both countries was similar. The US was relatively more aligned with China than with India (and the USSR was aligned in the opposite direction). China and India were similarly sized economies and collectively accounted for less than 4% of global GDP.

As such, their friction in 1987 was far less important, on a global scale, compared to the Perestroika and Glasnost policies underway in the USSR under Gorbachev.

And to the degree that a group of investors identified themselves as emerging market investors, it hardly mattered at all. The MSCI Emerging Markets index was created a year later in 1988 with no place for either India or China (because they were not sufficiently accessible for foreign investors until 1994 and 1996, respectively).

How things have changed compared to 1987!

Among all the simmering global conflicts this one is among the cooler ones but still clearly merits attention given the scale of the protagonists. 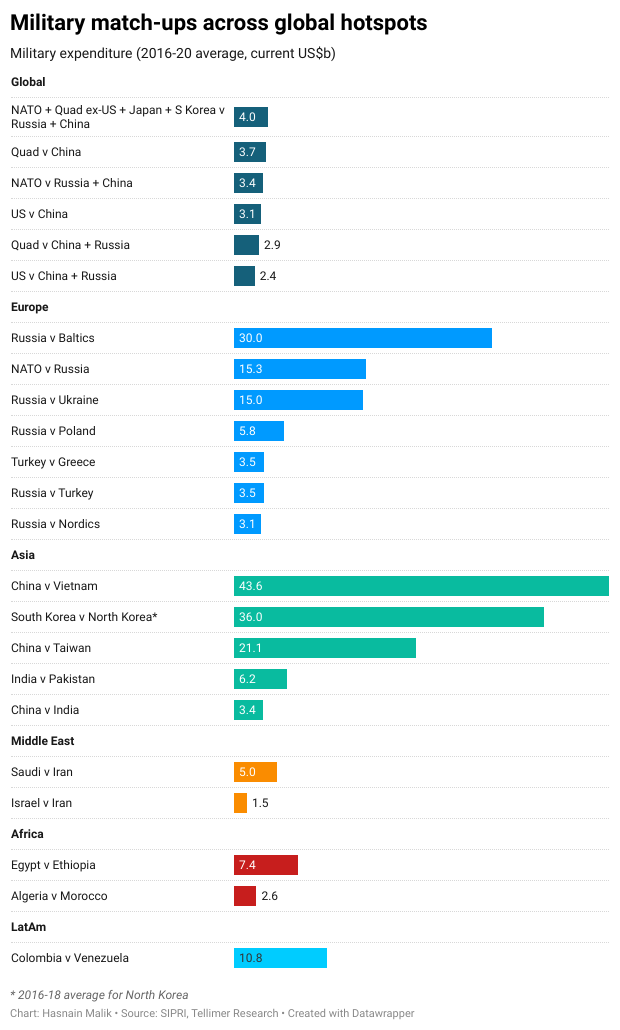