The SAIS China Africa Research Initiative (CARI) database, which documents Chinese lending to Africa, has recently been updated, with new data up to 2018. Here we highlight some of the key features of the data. Although the vintage of the data limits its use, it does reveal some useful information and trends.

As is well known, China has become a major creditor for many developing countries in Africa (and elsewhere, such as Southeast Asia), and is the single largest creditor for some governments, through bilateral lending and its Belt and Road Initiative (BRI). However, lack of transparency over Chinese lending hinders an assessment of its magnitude and resulting risks. The CARI data helps to fill some of this gap.

The latest numbers show that there were 48 new loans from Chinese institutions to African nations in 2018, totalling cUS$8.9bn. That brings the total number of loans recorded by the database since 2000 to 1,077, totalling cUS$147bn. But it is also worth noting that the CARI data comprises loans from various Chinese lenders to Africa, including both private and public sectors. We note that just four Chinese lenders, China Development Bank, ExIm Bank China, Catic China and Bank of China (which together might be a proxy for Chinese state lending), account for the majority of lending represented in the CARI data (cUS$121bn out of US$147bn since 2000), and looking at the data this way might be more relevant in terms of the potential for bilateral debt relief in times of debt distress for borrowing countries.

According to CARI, the biggest recipient by far has been Angola, followed by Ethiopia, Zambia and Kenya (Chart 1) while the largest recipient sectors to date have been transport (US$44.2bn), power (US$37.0bn) and mining (US$18.6bn). 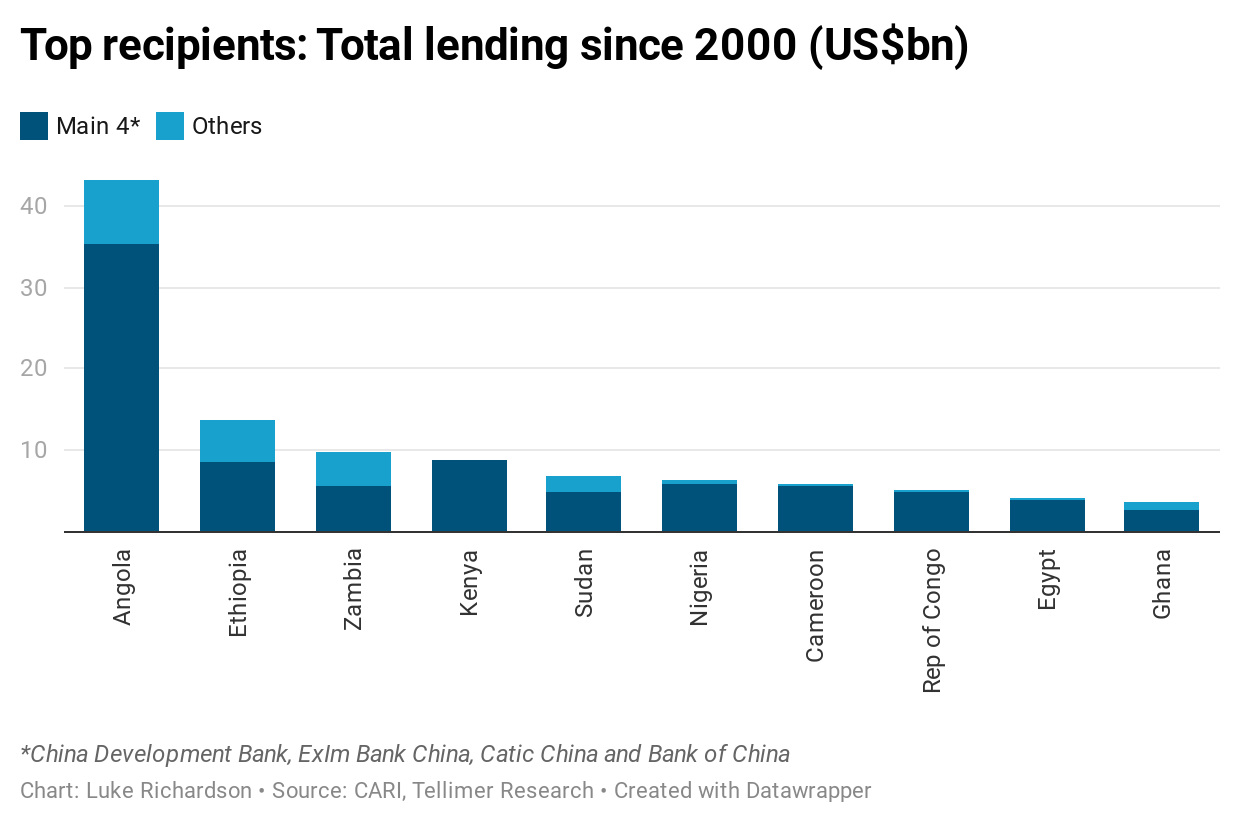 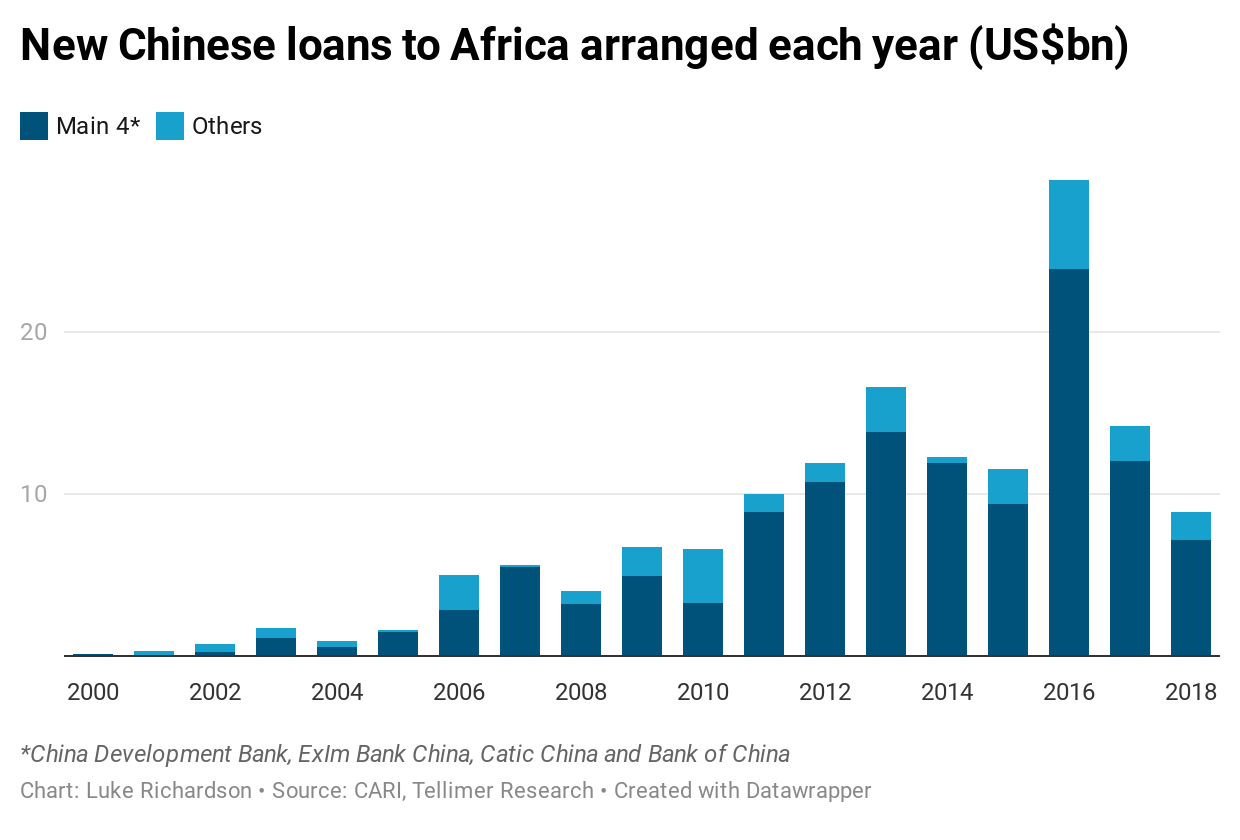 What the data also show, however, is a slowdown in China’s lending to Africa since its peak in 2016, perhaps reflecting rising financial risks at home and coinciding with the emergence of fiscal and debt sustainability pressures in African countries.

We also note that the CARI data captures cumulative lending and does not include debt repayments (or forgiveness). Hence, it does not capture the outstanding stock of debt, although one might expect a correlation between lending volume and debt stock, especially if the bulk of the lending has taken place recently and is on long repayment terms.

New World Bank IDS external debt data for DSSI-eligible countries (here) does, however, show the stock of external debt owed to China by selected African countries. It tends to mirror the picture painted by the CARI data in terms of exposures to China. It tends to mirror the picture painted by CARI. The top 10 destinations in the CARI data are seen to have the highest outstanding debt to China in the WB data (excluding Egypt and Sudan as they are not DSSI-eligible) – see Table. It also shows that, for some countries, China is the single biggest external creditor (half of Angola’s public external debt, and one-third of the debt in Cameroon, Ethiopia, Kenya and Zambia).

External liquidity and debt service problems have, however, resurfaced in some African countries during the Covid-19 pandemic. 27 African nations have recently received emergency financing from the IMF in response to the pandemic. Four others have gained new programmes or additional drawings under existing programmes since the start of the pandemic, while South Africa and Zambia have emergency financing requests outstanding. See the details in our IMF Policy Tracker here.

Moreover, the G20’s DSSI (of which China is a signatory), which seeks to provide a temporary suspension of debt service owed by certain poor countries to bilateral creditors, is intended to help some of the countries most badly affected. However, some African governments may find continued concessional borrowing from China more agreeable, while governments – and China itself – may prefer to negotiate forgiveness or rescheduling on a bilateral basis.

Chinese support could come at a time of limited financing options for many African nations. The EMBIGD sovereign spread for all-Africa was 742bps on 16 July and is much higher for some countries (widest was Zambia at 2674bps versus the narrowest of Morocco at 267bps), indicating higher financing costs than pre-coronavirus. Bilateral agreements with China could bring longer lasting financing benefits to African governments, act as an alternative to other financing sources and be arranged quickly. However, Chinese debt relief could come with a price. We cite examples in Sri Lanka, where Chinese debt has been converted into equity or infrastructure leases to Chinese firms. This could certainly be a possibility in Africa, where China has financed many infrastructure projects, some of which were completed by Chinese workers.