17 May 2021
Published by Tellimer Research

The decline of Chile's right-of-centre, governing coalition, Chile Vamos, was confirmed by the 15-6 May vote to elect the body responsible for reforming the constitution. Its seat count in the Constitutional Convention is below the one-third required to block any reforms it opposes. Its 24% share compares to its c45% share of seats in both houses of Congress, which assembled after the 2017 election.

Chile's next general election is scheduled for 21 November. Incumbent President Pinera cannot stand for re-election and leftist candidates are heavily outscoring their rightist counterparts in opinion polls, by a factor of almost 2x in the most recently published one in March.

The investment case in Chile equities, particularly relative to LatAm peers, is underpinned by the tailwind in Copper commodity prices (Chile accounts for c25% of global output and reserves) and a well established tradition of orthodox economic policy. Chile equities, measured by the S&P IPSA equity index, are up 11% ytd and c50% in the past 12 months, in total US$ return terms.

The shift leftwards in politics is already evident in the laws passed to allow around a 20% early withdrawal from private pension schemes (indeed, the ruling coalition's opposition to these laws has likely cost them at the ballot box and in opinion polls), which obviously adds material risk to this thesis.

Four mitigating factors are the following: 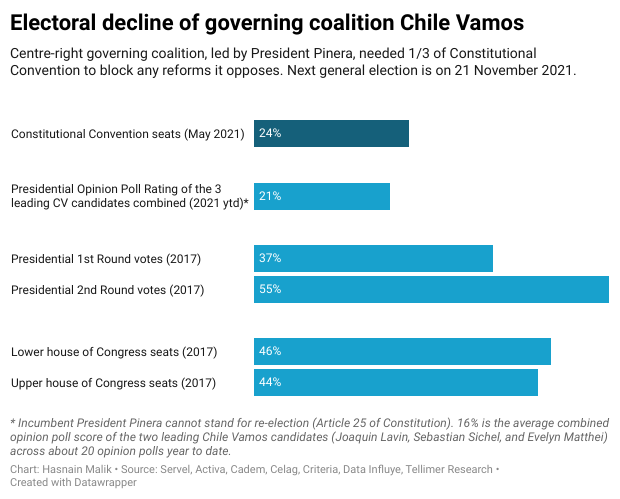 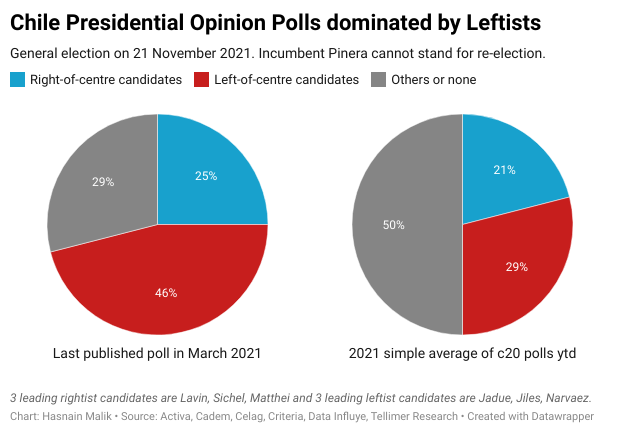