The Central Bank of Nigeria held its policy rate at 11.5%, in line with the expectation of 4 out of 6 economists surveyed by Bloomberg (with one forecasting a 50bps hike and another forecasting a 100bps hike). The decision was unanimous, compared to a March decision that saw 3 of 9 members voting for a rate hike. At the time, MPC consensus was that inflation was being driven by supply-side factors and that the economy was still too weak for rate hikes. The apparent peak in inflation (falling from 18.2% to 18.1% yoy in April) and relatively soft GDP numbers released over the weekend (with growth rising from 0.1% to just 0.5% yoy in Q1 versus a 0.9% survey) have reinforced that view, dampening the hawkish momentum from March.

In any case, inflation has shown little correlation with monetary aggregates or the policy rate in recent years, pointing to a breakdown of the transmission mechanism. Changes to the policy rate are therefore largely symbolic, with the CBN continuing to lean on other instruments like the CRR to control liquidity. In recent months, the CBN has tightened liquidity and pushed market rates closer to the policy rate, but interest rates remain sharply negative in real terms. 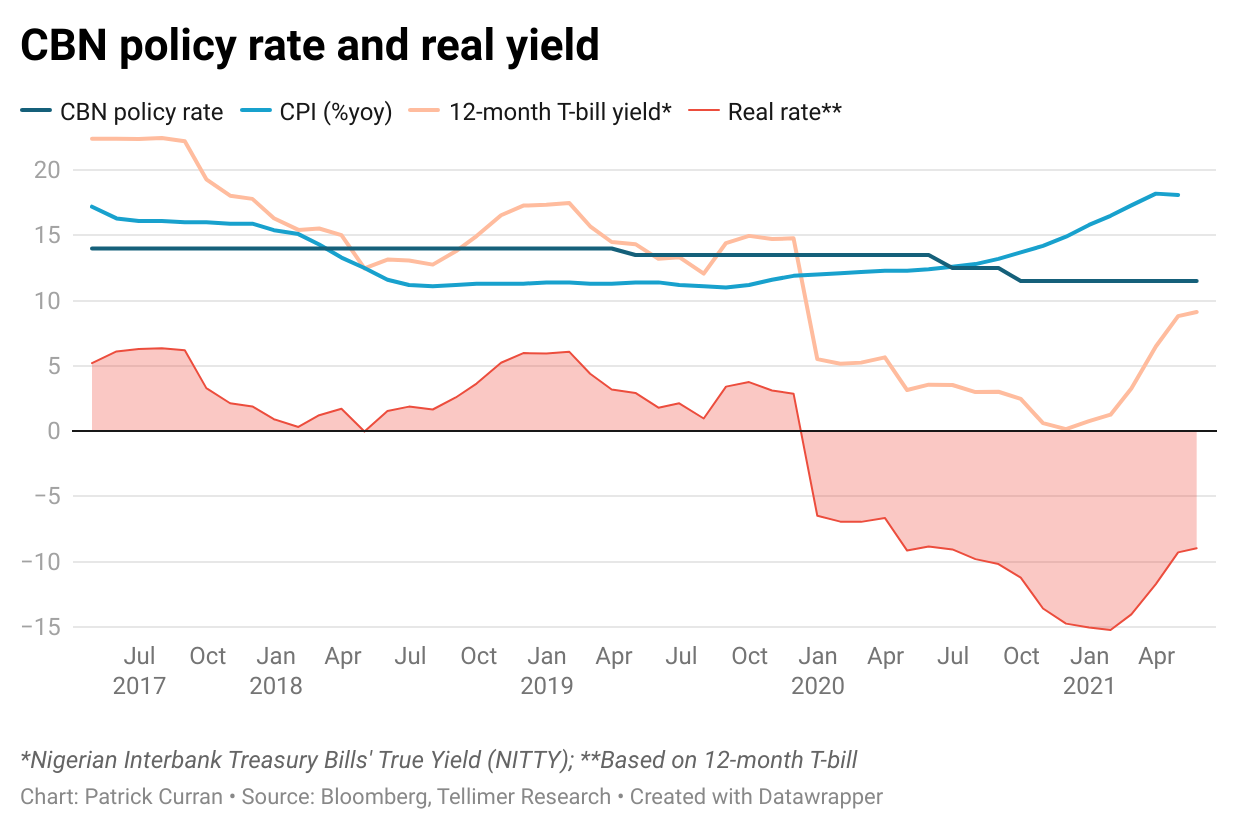 With the IMF forecasting growth of 2.5% this year and 2-2.5% over the medium term, versus projected population growth of 2.5% annually, growth is expected to remain negative in per capita terms and structural reforms – including efforts to address Nigeria’s convoluted FX regime and endemic insecurity – will be necessary to boost it to sustainably positive levels. While much of this is beyond the purview of monetary policy, we think the CBN’s policy priorities will continue to be higher growth and FX stability over price stability, and it will likely maintain an accommodative stance despite endemic inflation.

But while there is some truth to the CBN view that inflation is structural, there is clearly a large monetary component to it as well, with monetary aggregates continuing to grow rapidly. This view was echoed by certain MPC members in March, which had raised the spectre of a shift towards rate hikes later in the year. However, with a dovish shift taking place at today’s MPC meeting, we no longer think rate hikes are on the table this year. That said, the CBN may continue its de facto tightening by the backdoor, using other instruments to reduce liquidity and raise market rates. 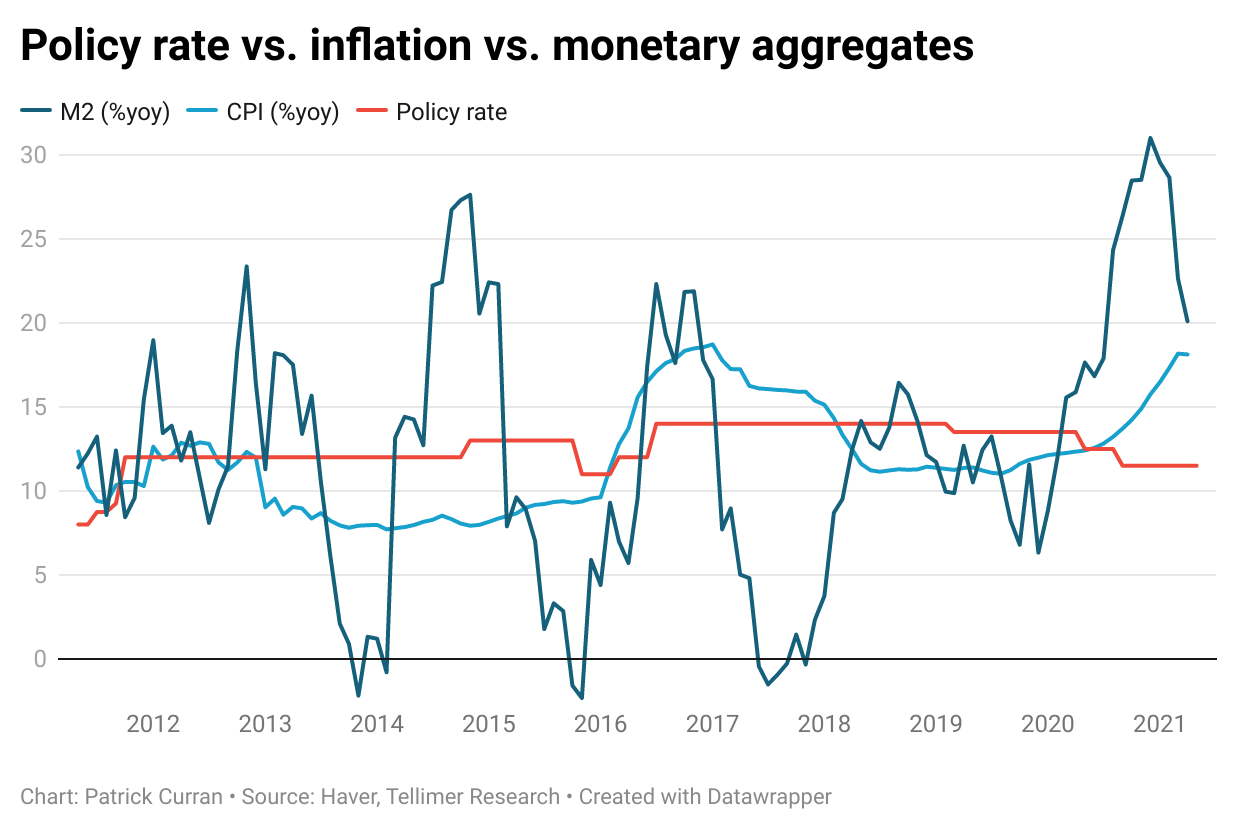 Likely of more interest to markets is the replacement of the official exchange rate quote with the Nafex rate of 410.25/US$ on the CBN’s website, the first tacit acknowledgement of last week’s news that the official exchange rate of 379/US$ had been unified with the Nafex rate. CBN Governor Godwin Emefiele confirmed the shift in his post-MPC press conference, saying that "We found out that we were no longer dealing in this so-called CBN official rate" and added: "We are still running a managed float, we are monitoring the market and seeing what is happening for us to ensure that the right things are happening for the good of the Nigerian economy."

However, as we have previously argued, the change is unlikely to have a meaningful impact unless accompanied by further flexibility of the Nafex exchange rate, which remains overvalued with severe implications for FX supply and liquidity. Emefiele’s statements affirm our view that the CBN is likely to continue operating a soft peg of the Nafex rate as long as oil prices are high enough to allow them to intervene, and will continue to delay the necessary normalisation of Nigeria’s FX market. 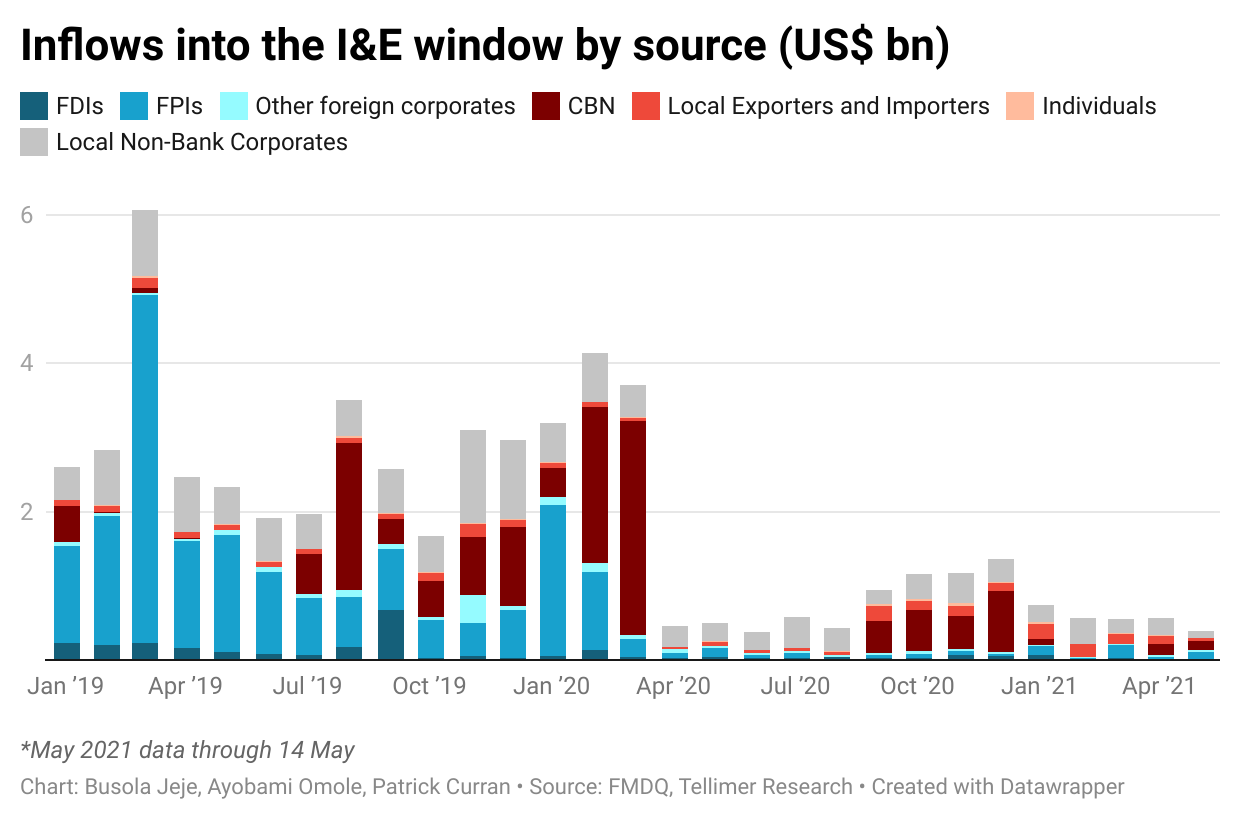 Overall, we think the CBN policy of prioritising FX stability and growth over price stability shows no signs of changing, and that weak growth numbers and the apparent peak in inflation in April will give further impetus to those on the MPC preferring to hold rates. The CBN probably will only seriously consider rate hikes in 2022, once the recovery has gathered a bit more steam. The next MPC decision is due on 27 July.

Nigeria: Another meaningless naira devaluation, 18 May

Nigeria and IMF clash on FX and monetary policy, 9 February