This week's focus is squared on Kenya, with the statistics agency scheduled to publish the Q4 GDP print. Arguably of more importance will be the Central Bank of Kenya’s (CBK) interest rate decision on Wednesday. While inflation risks are tilted firmly to the upside amid soaring food and commodity prices, it is widely expected that policymakers in Kenya will vote in favour of leaving the benchmark interest rate on hold at a multi-year low of 7.00% as it continues to provide support for the economy. After slashing the policy rate at the start of 2020 in response to the COVID-19 outbreak, the central bank has left rates on hold. Recall that the CBK slashed rates by 150bps in the first four months of last year. 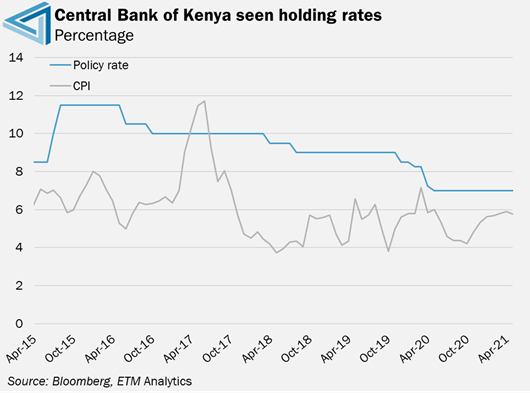 While the CBK slashed its policy rate in response to the pandemic and inflation has quickened this year, Kenya’s real interest rate (policy rate – CPI) remains buoyed in positive territory.

Specifically, Kenya’s real interest rate sits at 1.24%. While Kenya’s positive real interest has compressed in recent months with inflation accelerating from September lows, the fact that Kenya’s real rate remains buoyed in positive territory should continue to provide support for the Kenyan shilling. Looking ahead, although inflation risks in Kenya are tilted to the upside, we expect that the CBK will keep rates on hold in the coming months as it continues to provide support for the local economy, which is still battling the adverse impact of the coronavirus pandemic.

While Kenya’s economic prospects remain bright, it must be noted that the economic recovery came to a halt in April as the partial lockdown in five counties, including Nairobi, and increased curfew hours, constrained movement and demand.

Despite the slump in economic activity in April, Kenya is expected to record one of the strongest recoveries in Africa in 2021, with gross domestic product seen expanding by 5.3% in 2021, according to economists surveyed in the latest Bloomberg survey. The recovery is expected to persist in 2022, with the economy projected to expand by 5.2%. Looking ahead, we remain optimistic about Kenya’s economic prospects, with the country set to become a regional trade hub given its massive investment in transport infrastructure in recent years. 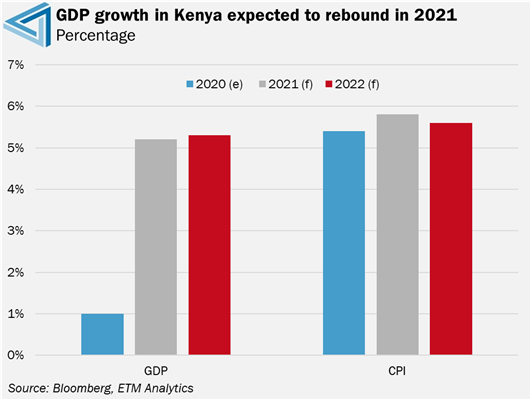 Speaking of which, two Maersk vessels made their maiden calls at Kenya’s new Lamu port last week, which the country hopes will be a gateway for trade in East Africa. The Lamu port, which has a planned 32 berths, will cost an estimated $5bn and is expected to help alleviate the heavily congested Mombasa port. Currently, the Mombasa port is the service hub for landlocked countries, including Uganda, Rwanda and the Democratic Republic of Congo. The Kenyan government plans to use the new Lamu port to service landlocked Ethiopia and Sudan. There are however some major concerns relating to the Lamu port due to the fact that it is located just 100km from the Somalia border, and therefore is at risk of insurgent attacks.

The international calendar is headlined by the Q1 US GDP print this week. The second release of US GDP for Q1 isn’t expected to bring any major changes and will most likely confirm that the economy expanded by 6.4% when compared to the final three months of 2020. This robust growth rate was driven by a surge in consumer spending after the government approved multiple major stimulus plans. Investment levels also generally picked up, as businesses looked ahead to when the economy would reopen fully. Since the initial figures were released, data out of the US has been more mixed with some recent disappointing stats for the likes of retail sales and employment. This suggests that growth should slow in the coming quarters. Nevertheless, with the Fed remaining as accommodative as it can be and the economy opening up even further, the outlook is still bright, and we will see relatively strong figures through the rest of 2021.

Federal Reserve officials have supported market sentiment today, following comments yesterday that affirmed that they expect transitory rather than lasting inflationary pressures from the US economic rebound. US Treasury yields are heading lower. Stocks are finding support as a result. Market-based measures of inflation expectations have dipped, but investors still seem generally cautious about the risk of a pullback in stimulus, which may cap gains for risk assets in the near term.

The USD has remained under pressure and is trading near last week's lows with Fed speakers having played down the threat of inflation. The USD continues to trade heavy, and the techs are suggesting that the downside remains vulnerable. Investors are still selling the USD upticks when they can and expect that the policy approaches both on the monetary and fiscal front will continue to keep the trade account deep in deficit and the budget under pressure to add to the USD's woes. 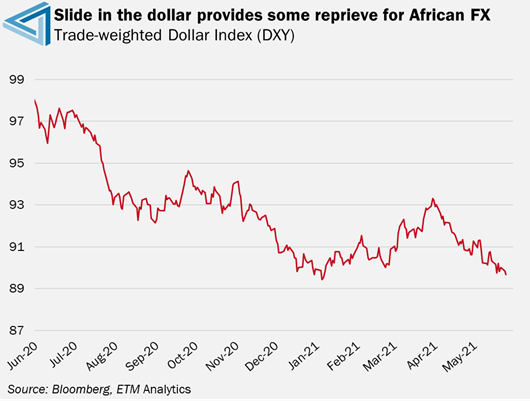 The weakness in the dollar has provided some reprieve for African FX at the start of the new week, with the majority of African currencies trading in the green on a week to date basis. In East Africa, the gains are being led by the Kenyan shilling (KES), which at the time of writing had gained 0.74% against the USD since Friday’s close.

While it has been a volatile couple of week for the KES, the broader bias in the currency remains bullish. While much of the bullish bias in the KES is attributed to the improved external conditions and dollar weakness, the currency has also found support from a rebound in remittance flows and improved trade dynamics due to the significant rise in agriculture commodity prices. For context, the KES has appreciated by 1.37% on a year-to-date basis.

The bullish bias in the Ugandan shilling (UGX) remains entrenched this week, with the UGX strengthening by 0.31% on a week to date basis. The recent strengthening in the UGX has seen the currency’s year-to-date gains against the USD rise to almost 2.90%. Underpinning the appreciation in the UGX this year has been a combination of the rebound in commodity prices and foreign aid flows into the country. 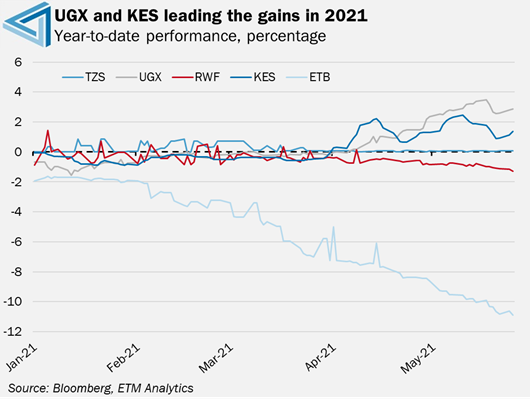 Notwithstanding the weakness in the USD and improvement in global risk appetite, the Ethiopian birr (ETB) has depreciated markedly this year, losing in excess of 10% of its value. Idiosyncratic challenges, which include a swelling public debt pile, security challenges, political uncertainty and most recently, the implementation of economic sanctions, have underpinned the bearish bias in the ETB this year. Going forward, we expect the bearish bias in the ETB to remain entrenched despite scope for a further weakening in the USD.