Recently, we analysed changes in non-resident and bank holdings of domestic government debt to see how emerging (EM) and frontier (FM) markets have financed their budget deficits post-Covid. We argued that countries unable to attract sufficient foreign investment (either via external debt issuance or inflows to domestic debt) or without a sufficiently deep domestic financial sector to absorb government debt issuance (either via banks or non-bank institutions like pension funds, mutual funds, or insurance companies) may be forced to rely on the central bank to finance large post-Covid budget deficits (either directly via monetisation or indirectly via liquidity support to domestic banks).

While monetisation of the budget deficit can be an attractive short-term solution for countries with limited financing options, it can only last so long before it stokes runaway inflation and currency depreciation. Further, the perception of fiscal dominance can undermine central bank independence and credibility, already so fragile in many EM and FM. This piece will analyse the extent of central bank financing of the government across 55 emerging and frontier markets to see which countries face the greatest risk of central bank financing feeding into an inflation or currency crisis.

The first chart shows the change in net central bank claims on the government in 2020 as a % of GDP, and compares it to other sources of budgetary financing, to show which countries were most reliant on the central bank to fund their budgets in 2020:

Indeed, the countries (aside from Angola) most reliant on monetisation in 2020 – Suriname, at 95% of financing, and Argentina, at 89% – both defaulted last year, while Angola (210% of financing) was only able to stave off default via debt relief from the DSSI and China alongside funding from the IMF and other key donors.

So far in 2021, monetisation has continued in several countries, surpassing 1% of GDP in 12 countries and rising above 2% of GDP in Bahrain and Tunisia:

Putting it all together, we plot central bank financing since January 2020 against the projected 2021 budget deficit, with countries further up and to the right at greater risk of runaway inflation/FX depreciation (or, of a forced fiscal consolidation to prevent such a crisis from occurring). The plot flags Suriname (not pictured – 16.7% of GDP of central bank financing and a 16.4% of GDP proj. deficit), Ghana, Bahrain, Botswana, Sri Lanka, Tunisia, Belize, and Seychelles as the most vulnerable countries. 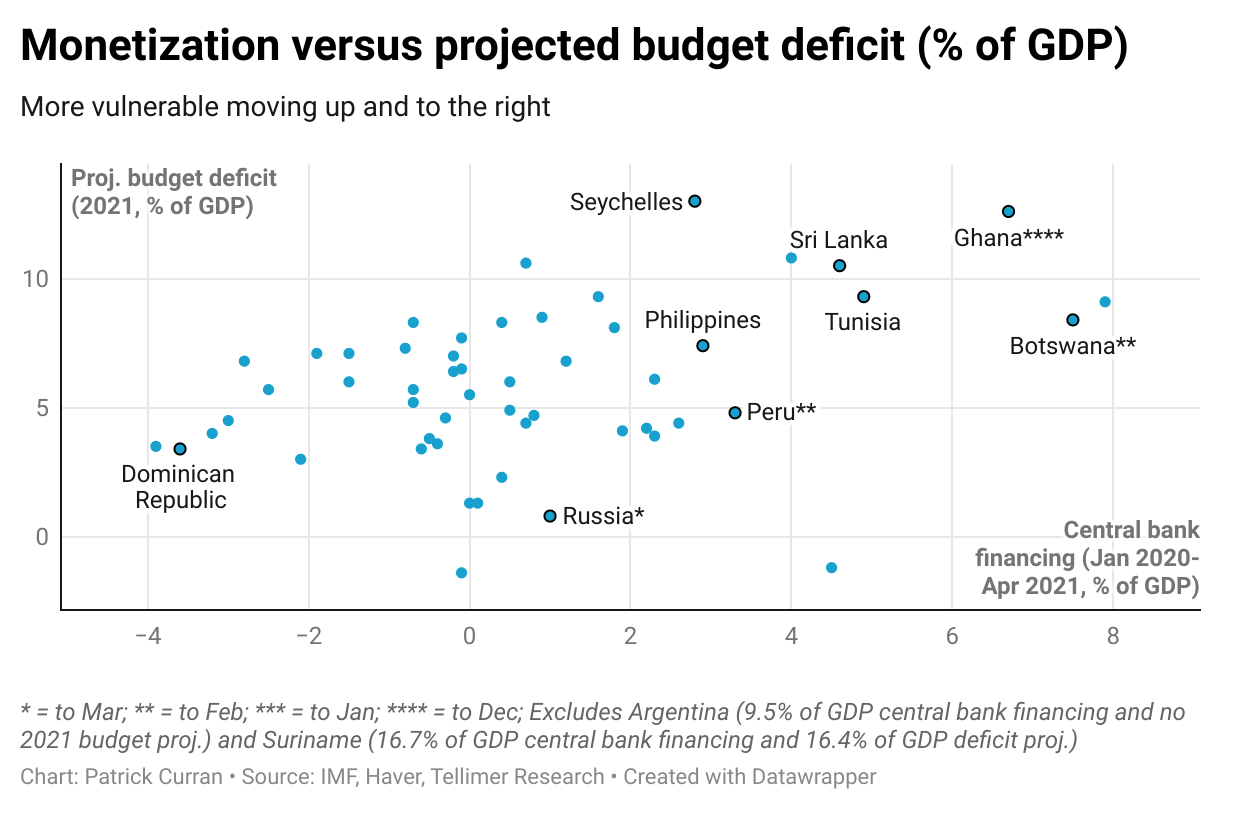 Of these, Suriname and Belize are already seeking a restructuring, so the plot is largely backwards looking. Suriname has been heavily reliant on deficit monetisation post-Covid, but is seeking to restructure in the context of an IMF programme, which will likely include targets to reduce central bank financing of the government. Belize, on the other hand, is seeking to restructure without an IMF programme, and it remains unclear whether it can improve its fiscal credibility and reduce the risk of deficit monetisation. It could end up like Argentina, which restructured without IMF backing and also still relying on the central bank to finance its deficits (9.5% of GDP of financing since January 2020 and 1.6% of GDP ytd – not pictured in chart due to lack of 2021 budget projection, following 8.9% of GDP deficit in 2020).

Risks also vary between those with a flexible and fixed exchange rate. Monetisation in the context of a fixed exchange rate regime puts pressure on the peg, so those with fixed exchange rates may be less willing to monetise their deficit (or, depending on the mechanics of the regime, may be legally constrained from doing so). It is therefore interesting that Bahrain (pegged to the US$) and Botswana (a "crawling peg" linked to the ZAR and a basket of trading partners) have both heavily monetised their deficits post-Covid, increasing the vulnerability of their pegs and heightening the risk they will eventually break.

Countries with access to external markets can finance those deficits by issuing external debt or attracting foreign inflows to their domestic debt markets. Countries with deep domestic financial sectors can rely on domestic banks or non-bank financial intuitions to fund their deficits.

However, countries without ready access to either of these financing sources may be forced to rely on central banks to fund those deficits. While central bank monetisation can be a viable short-term stopgap, eventually it will give way to rising inflation and currency depreciation.

Countries that have been most reliant on central bank financing since the beginning of last year, and which are projected to run large budget deficits in the coming year, are most at risk of an inflation/currency crisis. We identify Ghana, Bahrain, Botswana, Sri Lanka, Tunisia, Argentina, and Seychelles as the most vulnerable countries, and will continue to monitor them closely.