It did not take long for the two 47 year-olds at the heart of the new government, PM Liz Truss and FM Kwasi Kwarteng, to blow apart the credibility of macroeconomic policy in the UK. There have been moments this week when investors hoped for some reassuring words from the remaining "adult in the room", in the form of the independent Bank of England.

In emerging markets, as in developing markets, it is common for investors (and multilaterals such as the IMF) to look favourably on central bank independence. It is usually considered a positive structural reform because it improves the chances of orthodox, market-friendly economic policy.

This is despite the fact that developed markets provide examples of how the monetary arm of policy, even when it is run by an autonomous central bank, can be compromised by actions of the fiscal arm.

Emerging markets have their own glaring counter examples to the supposed comfort offered by central bank independence. Central bank legal independence today is neither a sufficient guarantee that it lasts in future, nor that monetary policy is optimal, nor that overall economic policy (monetary, fiscal, exchange rate, and structural reform as a whole) will remain credible.

In the Quality of Government index of central bank independence, last updated in 2012, Turkey scored higher than almost any other in EM (Argentina also scored relatively highly), while Brazil scored lower than almost all. However, a decade later: 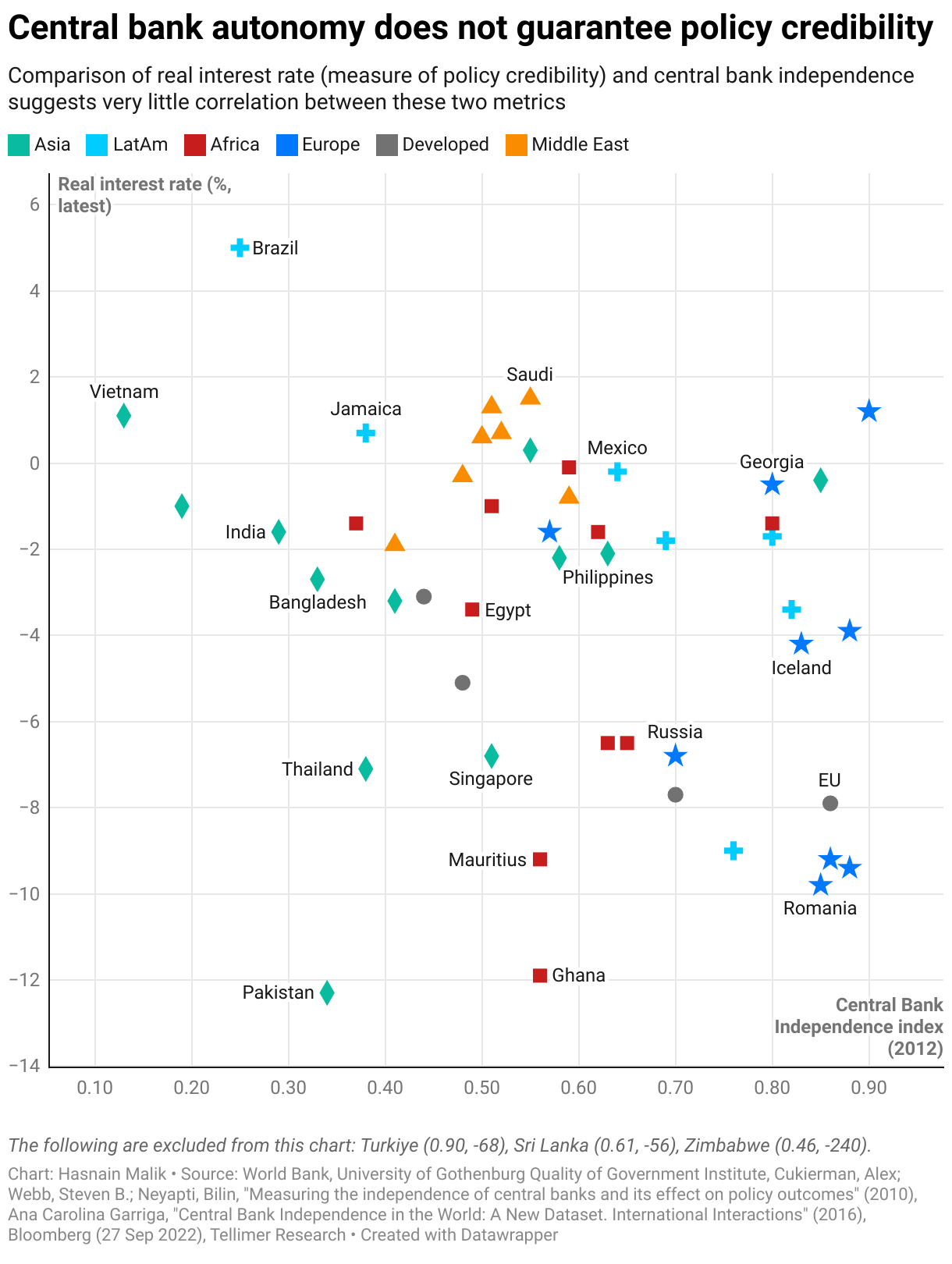 The emphasis that emerging market investors place on central bank independence alone is overdone. Perhaps, as some developed market governments, and the social-economic environment they reflect, start behaving like some of the worst culprits in emerging markets, this point may apply to DM investors as well.

But this week's experience — specifically, the desire of some investors to see an assertive, emergency response by the Bank of England to the Truss-Kwarteng fiscal blowout — suggests we are not yet at that stage.

The sharp increase in its 10-year bond yield (4.1% to 4.6%, a level not seen since 2013), following the election, suggests that Italy may provide the next example of what happens when DM politicians start "behaving badly" on economic policy.

Having the global reserve currency probably means the US will remain an exception to this discussion on policy credibility for some time.

Post-global financial crisis and post-Covid, the role of central banks has increased. We are yet to see an example in DM of a significant repeal or watering down of central bank autonomy, but there is clearly debate over how to make sure the accountability of independent central banks increases with the power they exert — eg see Unelected Power by Paul Tucker (2020).

My colleague, Stuart Culverhouse, has written on this topic before: see The decline and fall of central bank independence (November 2020).

The Tellimer Country Investability Index is an attempt to encompass the many facets of the investment case in one quantitative framework. Our index weights c30 factors on growth (short and long term), policy credibility, politics, sanctions, ESG and, for equity investors, valuation and liquidity. The weights in the index can be changed in order to model different global themes and portfolio styles.