We set out our thoughts on Cameroon and Gabon following our discussions with the IMF teams at the recent virtual IMF/World Bank Spring Meetings. We would like to thank IMF staff for their time. The views we set out here are our own. We assign Buy recommendations to the REPCAM 2025s and GABON 2031s.

Although both Cameroon and Gabon suffered during the crisis, the economic impact may have been less than feared, and we have been impressed by their relative resilience and the maturity of the policy response. As oil exporters, both countries suffered a double whammy through Covid restrictions and lower oil prices, although Gabon is the more oil-dependent of the two and arguably suffered a greater shock (64% of goods exports and 39% of fiscal revenue – excluding grants – in 2019, pre-Covid, for Gabon, compared with 40% and 17%, respectively, for Cameroon).

Both countries quickly turned to the IMF to benefit from its enhanced emergency financing; both have had two rounds of emergency disbursements (Cameroon two rapid credit facilities (RCFs), in May and October, and Gabon two rapid financing instruments (RFIs), in April and July). Cameroon also benefitted from the debt service suspension initiative (DSSI), while Gabon has not (Gabon isn’t eligible). Both countries also requested successor IMF programmes to replace ones that expired last year, notwithstanding possibly lower financing needs compared with just six months ago.

We are encouraged by the authorities’ commitment to seeking new IMF programmes and their strong sense of ownership, which will be valuable both for the financing they provide (and additional donor funding they can catalyse) and for their policy discipline and reform agendas. Indeed, in both cases, to their credit, it seems the authorities had shown interest in successor arrangements even before their existing programmes expired, which Covid made more pressing, and the IMF’s CEMAC report on common policies in January assumed a second wave of programmes. Strong ownership reflects in our view both a sense that the previous arrangements worked well and recognition of the wider need from the regional side to preserve macro-stability. This is in contrast to the first round of regional IMF programmes in 2017, following the 2014-16 oil price crash, which were more forced on them, under international pressure.

This length of time is in part due to assessing the impact of Covid and due to programme design, where the fiscal consolidation path, domestic revenue mobilisation, public financial management (PFM) and assessing the state of state-owned enterprises (SOEs) are a key focus in both cases. In Gabon’s case, there is also more of an emphasis on ensuring debt sustainability (its debt burden is higher than Cameroon's), bringing it down from over 70% during the programme period to 60% over the medium term.

Both countries fell into recession last year, unlike their WAEMU neighbours Senegal and Cote d’Ivoire (and Benin) which still managed to record positive growth. In Cameroon, real GDP fell by 2.8% from +3.9% in 2019 (a swing of 6.6ppts), according to IMF April WEO data. Cameroon is expected to see a stronger rebound in 2021, with growth of 3.4%, and 4.4% over the medium term. In Gabon, real GDP fell by 1.8% from +3.9% in 2019 (a swing of 5.7ppts), according to the IMF April WEO. That Gabon didn’t see an even larger decline, given its greater oil dependence, owes something to the performance of its non-oil economy, especially mining (it is a key producer and exporter of manganese), as well as oil production remaining higher than implied by OPEC+ quota cuts. Gabon’s recovery is more muted, with growth now projected at 1.2% in 2021, down from 2.1% projected in October, due to the impact of Covid, and 3.8% over the medium term. For both, medium-term growth prospects are, however, in part dependent on improving the business climate and the efficiency of public investment, a key focus in both countries’ IMF programmes, as well as governance, transparency and anti-corruption.

Gabon’s external and fiscal accounts suffered a greater deterioration than Cameroon’s given its greater oil dependence. Gabon’s current account deficit widened from 1.8% of GDP in 2019 to 5.1% in 2020 (IMF April WEO), although the deterioration was not as large as expected (-9.5% was projected in the second RCF report published in August), and the situation is projected to reverse quickly this year due mainly to higher oil prices. The current account is now projected at broad balance over 2021-22 (IMF April WEO), compared with a previous forecast of a 6.3% deficit in 2021 and 3.6% deficit in 2022. In Cameroon, the current account deficit was already wider in 2019 (-4.4%) and didn’t blow out as much in 2020 (-5.3%), but nor is it expected to narrow as quickly (-4.4% in 2021 and -3.2% in 2022), based on WEO data.

Public debt risks remain. Gabon’s public debt jumped by 13ppts, up from 60% of GDP in 2019 to 73% in 2020 (IMF April WEO). While its public debt is sustainable according to the IMF’s most recent DSA (second RFI in November), it also noted debt dynamics have worsened and risks to debt sustainability have increased. In Cameroon, public debt rose by less than 2ppts in 2020 to 43% of GDP and is expected to edge down to 37% in 2025 (IMF April WEO). However, Cameroon’s public debt was still assessed as at high risk of distress in the IMF’s most recent DSA (second RCF in August), although debt is still judged to be sustainable.

Financing needs are high but manageable. Public sector gross financing needs (GFNs) are high in both countries, estimated at c10% of GDP over 2021-22, in their respective second RCF/RFI reports, although they may be a bit lower now, due to higher oil prices. But high GFNs are seen as manageable, with support from the IMF, other donors and issuance on the regional market. Cameroon has also benefitted from the DSSI, and we expect it will seek to use the final extension given its participation in the two previous rounds.

Importantly, we think both countries may look at active debt management or liability management operations (LMOs) to smooth debt repayment humps, reduce debt service costs and ease refinancing risks where possible, a key takeaway from the IMF meetings. This would be positive for bondholders. It is a policy option that is emerging as a common theme across Sub-Saharan Africa issuers, and frontier issuers more generally, as debt managers eye the success of similar recent operations by Benin and Ghana this year, and Cote d’Ivoire in November, in preparation for a wall of maturities over 2022-24, when bonds issued some 10 years ago in the first wave of frontier issuance fall due. And Gabon already has experience of LMOs, including through its tender for the 2024s in January 2020, before Covid, when it also issued the 2031s.

Of course, Cameroon (B2/B-/B) only has one bond (2025 maturity) but this begins to amortise from 2023 (US$250m annually over three years), and it has a high coupon (9.5%). Gabon (Caa1/-/CCC) has three bonds, with the nearest maturities in 2024 and 2025. It has already partly retired some of the former, through previous tender offers, but still has US$736mn left, which amortises from 2022, and the US$700mn bullet in 2025. LMOs, therefore, make sense if they can be done cost effectively, and communicated clearly, and prevailing yields suggest both retain market access.

Cameroon however did suffer in February from contagion from Ethiopia’s surprise request for a Common Framework treatment (restructuring). REPCAM prices fell c6pts on the news, as investors looked at who might be next. But we think such concerns are overplayed in Cameroon’s case. As we heard, Cameroon’s fundamentals, and ability and willingness to pay, seem stronger. It is not the same situation as Ethiopia or Chad (or Zambia).

Gabon, meanwhile, is not eligible for the Common Framework (as it is not DSSI eligible). But it may still suffer from spillover concerns over restructuring risks given perceptions of a weak payment culture and recurring external arrears (official bilateral, including the Paris Club, and domestic arrears too), so that it may have to fight harder to show that it can service its debt. Arrears had been cleared during the previous programme but may have reaccumulated in 2020 due to Covid. Our sense was external arrears were a technical problem, due to weak PFM and lack of coordination across (or within) departments rather than a poor payment culture and inability to pay (the authorities have remained current on its bonds). Comments earlier this year, by the new minister of economy, about a reprofiling may also have been misinterpreted.

We assign a Buy recommendation to REPCAM 2025s, with a yield 6.1% (z-spread 554bps) on a mid-price basis as of cob 16 April on Bloomberg. This is based on IMF support and potential for a LMO, and exaggerated concerns over the Common Framework. The bonds have rallied by 70bp this month, but are still c70bp wide of their January lows.

We assign a Buy recommendation to GABON 2031s, with a yield 6.5% (z-spread 512bps) on a mid-price basis as of cob 16 April on Bloomberg. This is based on IMF support and potential for an LMO. The bonds have rallied by 60bps this month, but are still c50bps wide this year and 100bps wide of Senegal and Cote d’Ivoire, albeit with much stronger ratings. 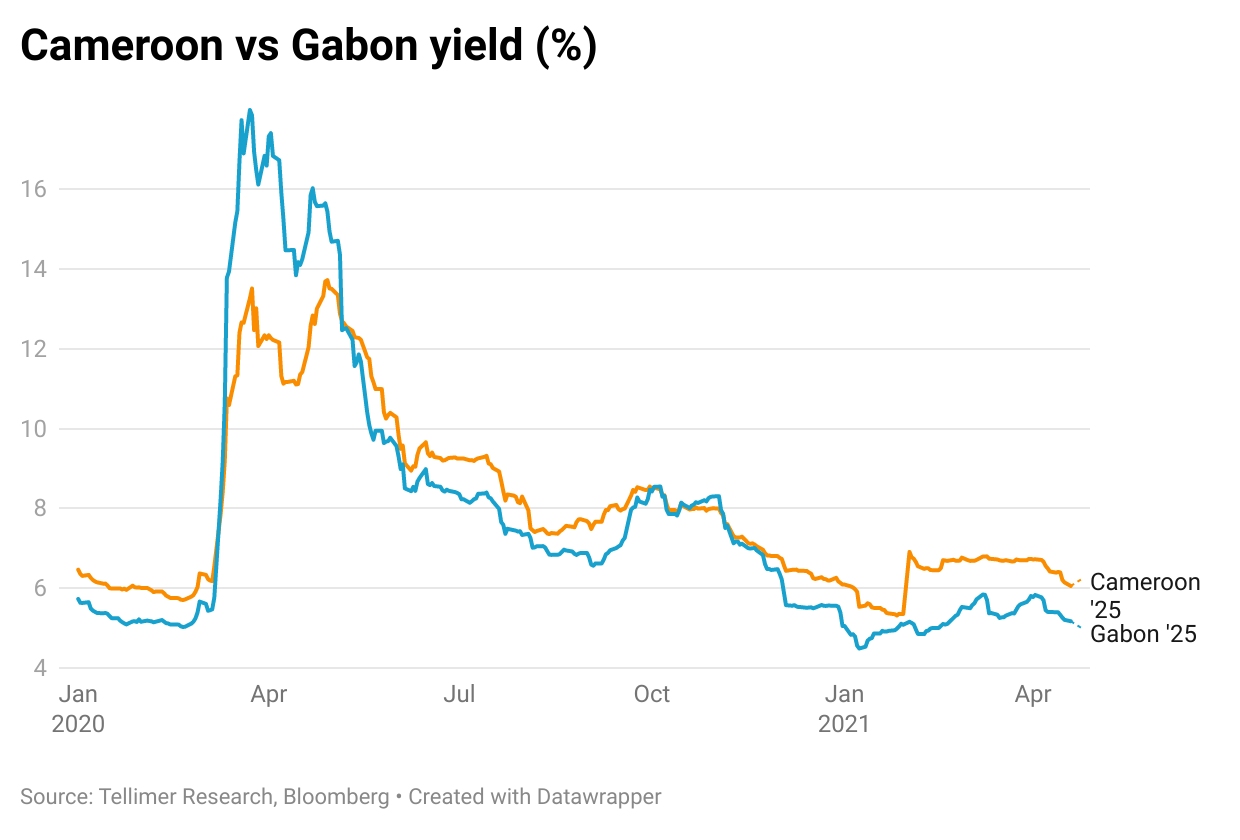 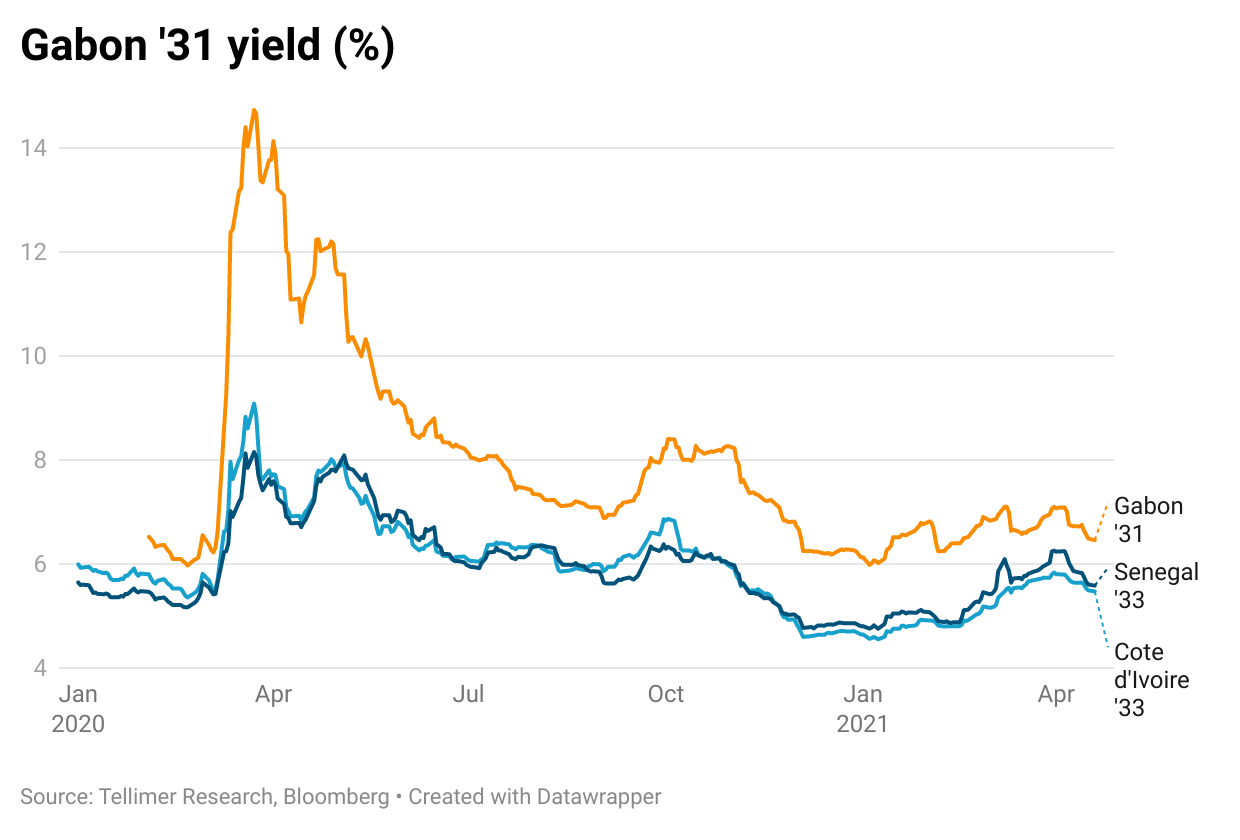