16 May 2022
Published by
Tellimer Research

Despite the war in Ukraine, on the surface, there is little difference since the Annual Meetings last October. Macro performance has been sound, the fiscal deficit is under control, public debt is manageable and there has been no change to the risk of debt distress (still high). Cameroon should even benefit from higher oil prices, although some of this may be offset by the fiscal cost of maintaining administered prices. But higher global interest rates and, likely, domestic security concerns seem to be weighing on the bonds.

The IMF concluded the first review of its joint extended credit facility/extended fund facility arrangement on 23 February. The three-year programme was approved in July 2021 and has a semi-annual review schedule. Completion of the review enabled the disbursement of US$116mn, bringing the total disbursed so far to US$293mn (42% of the amount granted under the programme).

Programme performance was described as mixed. On the one hand, macroeconomic performance has been broadly satisfactory. Real GDP growth recovered from the slowdown due to the pandemic, picking up to 3.6% in 2021, up from 0.5% in 2020, while the fiscal deficit has been well contained. The overall deficit, including grants, on a payment basis (as used in the WEO) was 3.1% of GDP in 2021, little changed from the year before, and was projected to narrow to 1.8% this year and be close to balance in 2023 (thereby meeting the WAEMU deficit target of 3% by 2024 well ahead of schedule). Public debt rose last year by just 2ppts from 2020 to 47% of GDP, and this is only 5.5ppts higher than pre-Covid levels.

However, on the other hand, the key message concerned the slow progress on structural reforms, a key plank of the programme (most of the five pillars that underpin the programme related in some way to reforms). Slow progress reflected state bureaucracy, and the huge government machinery, which slows decision making. The authorities needed to push harder to unlock the country’s potential, with successful reform implementation helping to boost growth (we’re not seeing the hockey stick effect yet), diversify the economy and reduce vulnerabilities.

Moreover, the Board review took place the day before the war in Ukraine started. The deterioration in the external environment caused by the impact of the war might change the outlook although it is too early to say with any certainty what it will be. The 2022 growth forecast has been revised down in the WEO by a preliminary 20bps to 4.3% from 4.5%, although medium-term trend growth remains at 5%. The oil windfall will boost exports and fiscal revenues (oil accounts for c37% of exports and 15% of fiscal revenue). The WEO projects a sharper narrowing in the fiscal deficit to 1.2% of GDP this year.

However, higher food, energy and other input prices, and supply disruption (eg fertiliser, or wheat imports from Ukraine), could have a negative impact on inflation and social stability. Moreover, the oil revenue windfall could be offset by the mounting fiscal cost of maintaining a lot of administered prices (including gas at the pump). Yet, despite the higher subsidy costs, it could be politically difficult to increase administered prices in the face of instability in the Anglophone region and the deteriorating security situation on the border with Nigeria.

Still, the authorities remain committed to fiscal discipline, and keeping to the 3% WAEMU deficit target by 2024. Indeed, there is even some fiscal space to allow for a wider deficit and still meet the target.

Cameroon’s public debt is judged to be sustainable although it is still assessed to be at high risk of debt distress. Three of the four external thresholds are breached, notably debt service to exports. This highlights the need to increase, and diversify, exports and to step up efforts on domestic revenue mobilisation. Revenues are c14% of GDP, rising to 17% in 2026, in the first review. It also highlights the continued importance of concessional financing sources. However, we wonder to what extent the debt service is impacted by rescheduled payments under the debt service suspension initiative (DSSI), especially as two-thirds of external debt service this year is owed to bilaterals (60% non-Paris Club/40% Paris Club). Very little (less than US$70mn) is due on the eurobonds. Still, despite potential concerns over the weight of external debt service, there seems little to justify a Common Framework debt treatment, which may reassure investors.

However, for bondholders, the usual concerns prevail, namely that of: 1) succession, and what a post-President Biya Cameroon looks like; and 2) the fragile situation in the Anglophone region.

But the bonds have been on a declining price trend since November (-15pts), even before the war in Ukraine, with yields some 230bps higher, and a total return of -8% YTD compared with -15% on the relevant Bloomberg index. The bond price is at post-issue lows of EUR84 (mid), although Cameroon doesn’t seem the most exposed to higher global interest rates. 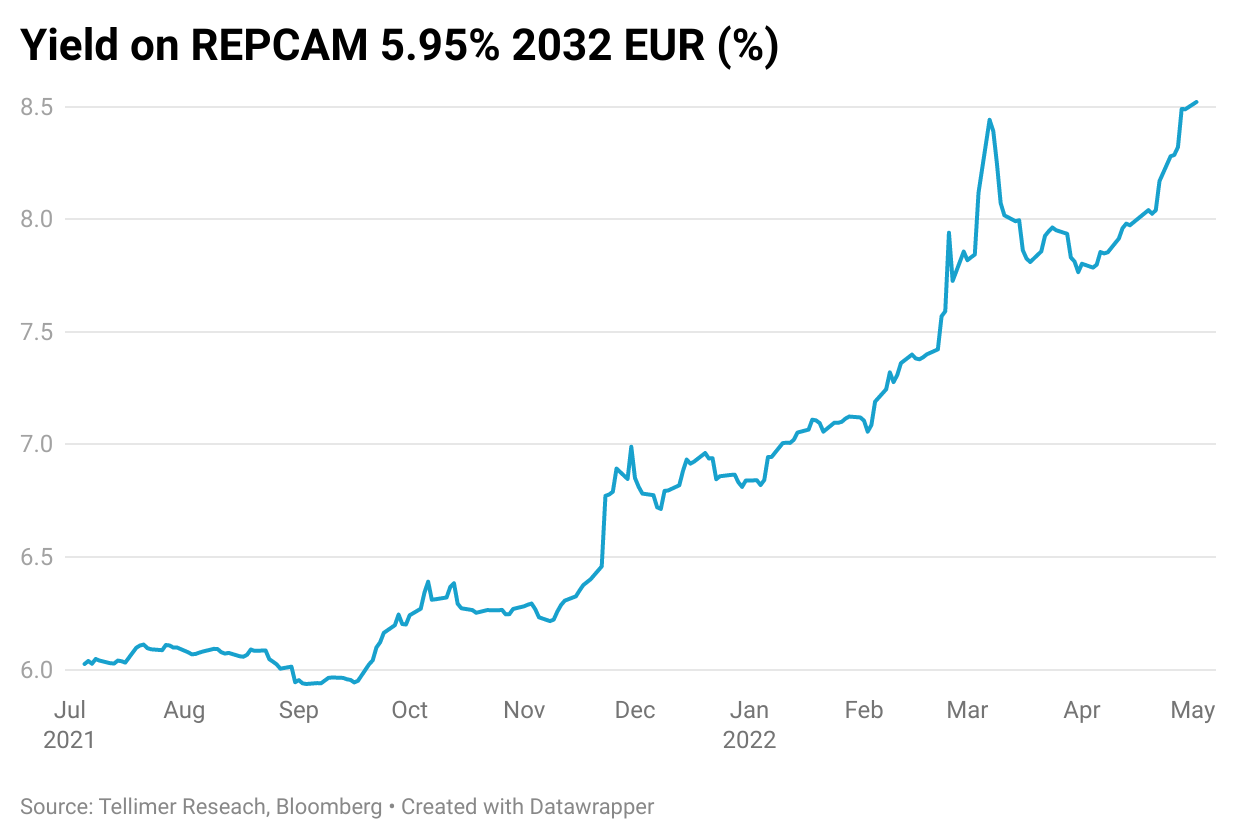