4 May 2021
Published by Tellimer Research

Arion Bank is a rarity in Europe – an income-generating banking share. It has returned the equivalent of 9% of its market value to shareholders since the turn of the year. We expect further distributions to take place, possibly in Q4. Core profitability should rise, with Arion's technology leadership driving efficiency improvements, while discontinued operations should no longer drag on headline earnings. As highlighted in our recent in-depth study, we expect the bank to deliver c20% reported EPS growth over the coming years.

Arion Bank has completed its ISK15bn share buyback programme within the space of just two months and has cancelled 70mn shares, equivalent to 4.0% of the total. These transactions have facilitated a significant shift in the shareholder structure, allowing major international shareholders like Taconic, Sculptor and Landsdowne to exit, and long-term local holders (such as pension funds) to lift their holdings. 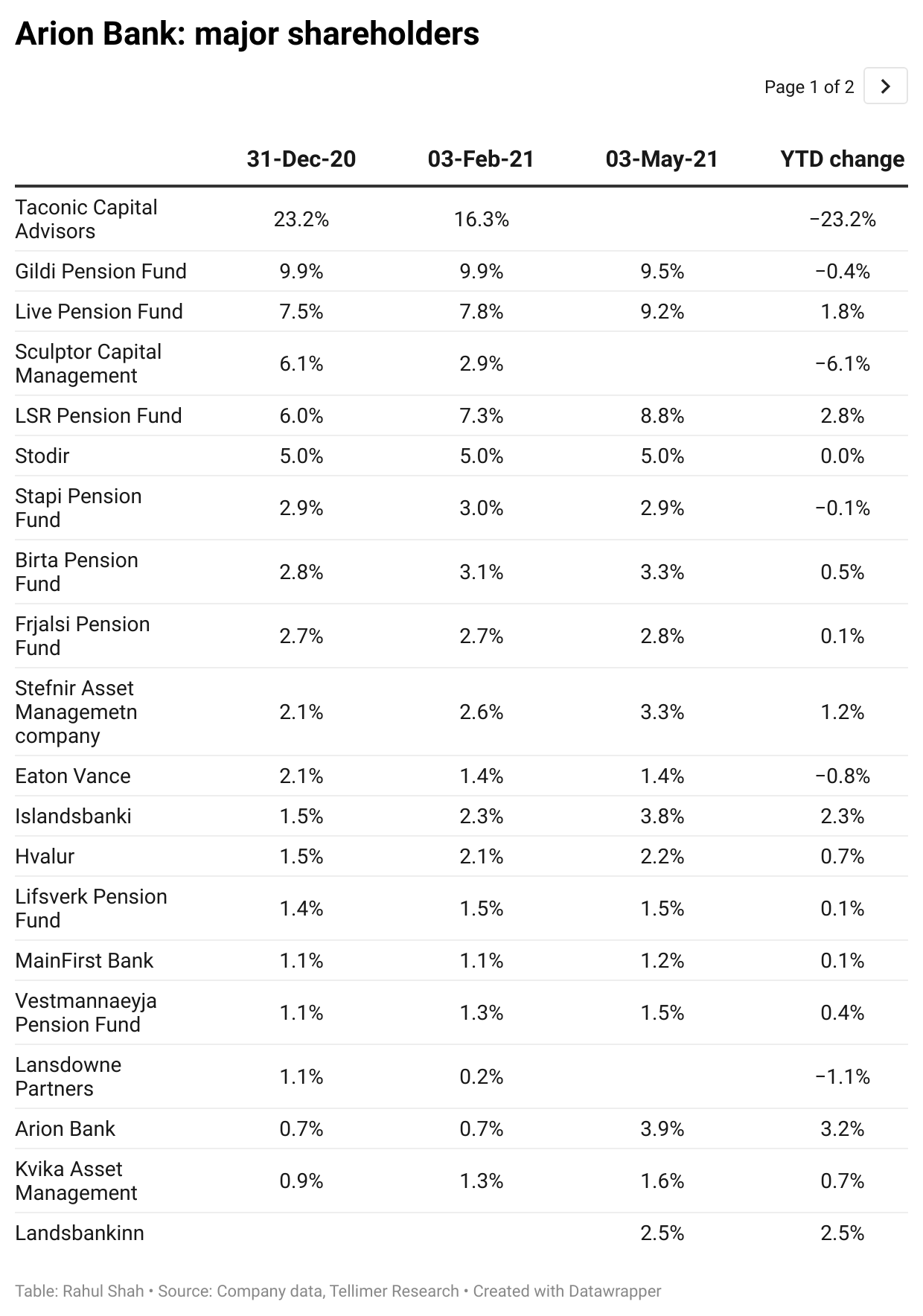 Together with the ISK3bn dividend paid in March, the bank has returned ISK18bn to its shareholders, equivalent to 8.6% of its current market cap. We see good prospects for further capital return before year-end. European regulators are likely to revisit the issue of bank dividends in Q3, while Arion could also consider starting a new buyback programme. The firm has committed to an additional ISK50bn capital return to shareholders in the coming years, equivalent to almost one-quarter of the current market capitalisation.

Q1 21 results will be released tomorrow

We highlight below some of the key trends we expect to see when Arion Bank reports its Q1 results:

Central bank system data indicates loans have grown almost 2% ytd. This suggests that the low interest rate environment (0.75% policy rate) is still supporting borrower appetite, with refinancing activity remaining strong. Key drivers of the growth have been residential mortgages, the seafood industry and non-residents. As we have seen previously, low interest rates favour the commercial banks versus the pension funds and the government-owned Housing Financing Fund in the mortgage market. Accordingly, we expect Arion will continue to post healthy loan growth data, which will likely exceed the medium-term guidance of “in line with economic growth”.

Turning to deposits, central bank data also show slightly below 2% ytd growth at the system level, driven by demand deposits. Plentiful deposits have contributed to Arion Bank’s lack of ISK covered bond issuance over recent months, and together with high capital ratios are supportive for an extension of the share buyback programme.

Margins will be squeezed

Low interest rates have driven down asset yields. This repricing is continuing. Last year, Arion was able to offset this via lower funding costs (helped by strong deposit inflows), but there is now limited scope for further improvement here. Accordingly, we do expect some softening of margins in Q1 and beyond.

Fee income is benefiting from some positive drivers

Low interest rates and expectations of a reopening of borders in H2 is prompting an uptick in capital markets and corporate finance activity. Low interest rates are also supporting refinancing activity. Asset management fees should benefit from the upward trend in equity markets in Q1, and a shift away from lower margin fixed income products towards equity products in clients’ portfolios. These positive trends will be somewhat offset by lower yoy transactional activity in the payments space.

Turning to investment income, we see scope for gains on the bank’s equity portfolio, whereas the fixed-income portfolios' valuation is likely to remain broadly flat.

Management recently lowered the cost/ income ratio target to 45% from 50%, signalling that the focus on operating costs remains. We see two key areas of opportunity; IT costs and housing costs. Both are likely to take a couple of years to be fully realised. In the meantime, wage inflation is running at 3-5%, while the new staff bonus scheme could be equivalent to 10% of base salary.

Cost of risk – no uptick expected

Arion Bank has acted proactively to provision its portfolio for the impact of the pandemic – its heaviest charge occurred in Q1 2020. We don’t see any reason for the bank’s key macro assumptions to have changed since end-20, and therefore don’t expect much change in the stock of general provisions. We note that the unemployment rate seems to have peaked at 12.8% in January, although a meaningful improvement will likely not take place until the summer, once the tourism industry posts a recovery.

CEO Benedikt Gislasson commented during the Q4 20 results call that no further downside was expected from these assets in 2021. We expect the Q1 results to be consistent with this guidance.

This report was commissioned by the company, sovereign or issuer that is the subject of the report. However, it was prepared by Tellimer the same way as independent investment research as contemplat...