Winning the election was hard. Governing via a highly fragmented congress will be harder. And that makes it unlikely that Brazil will tackle its high fiscal deficits and government debt any time soon.

However, as long as commodity prices provide a tailwind, Brazil equities should continue to perform well – up 14% year to date, far outstripping large emerging market peers.

Brazil's equities and currency are also cheaper versus historical averages than most large EM peers and its real interest rate is the highest in EM.

Bolsanaro performed better than expected by winning most of the share of votes captured by centrist candidates in the first round. 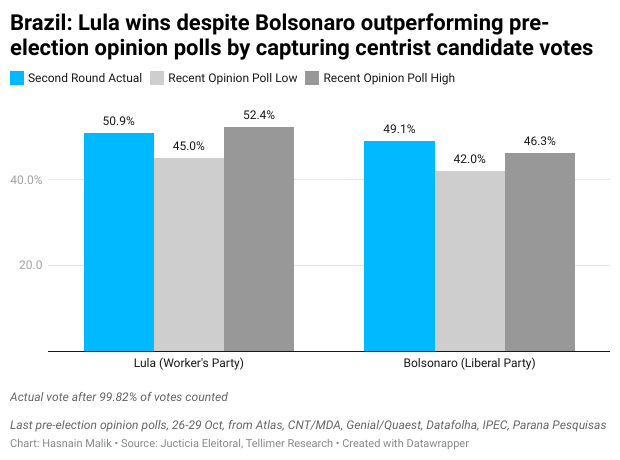 While the margin of defeat, merely 1.8 percentage points, may embolden him to dispute the results, prolong the transition or disrupt the electoral process altogether, we regard extra-constitutional actions as unlikely.

Nevertheless, his reaction to defeat has been a commonly held concern prior to the election and, at the time of writing, this remains unresolved.

The caricatures painted by their political opponents are of Lula the market-unfriendly, sell-out socialist, kleptocrat and Bolsonaro the crass, corrupt, environmentally destructive, borderline fascist. They were certainly two very different contestants in this second round, appealing to polarised camps among the electorate.

From an investor's perspective, neither is Lula so market-unfriendly as to derail the fundamental drivers, should they remain positive (eg commodity prices), nor is Bolsanaro so market-friendly (and immune from the populist fiscal impulse) that Brazil's equities cannot perform without him.

There is a lot of focus on Lula's choice of finance minister but that ignores the difficulties faced by a technocratic champion of fiscal orthodoxy, Paulo Guedes, to push fiscal reform through the president that appointed him at the start of 2019 and the congress that passes law.

The IMF forecasts a fiscal deficit of 7.5% of GDP and gross government debt of 88%. To push through the difficult structural reforms that are needed to improve these metrics requires a collaborative relationship between the president and congress. But the prospects of that are not good. 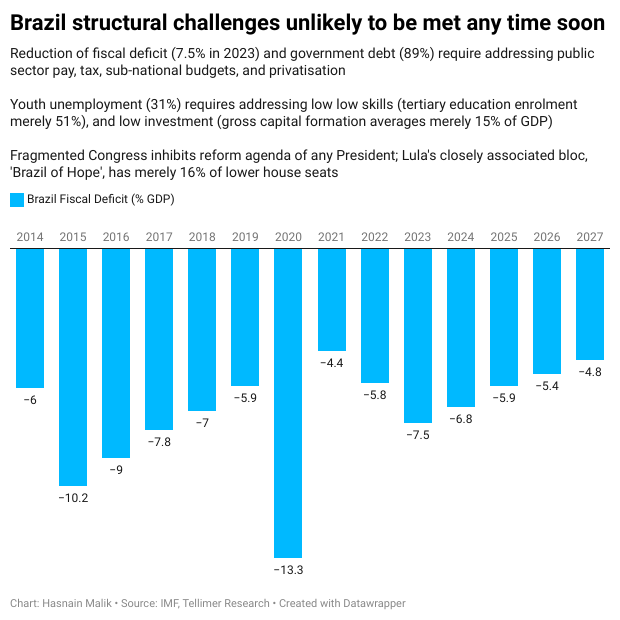 The key change after this election is not the personality of the president but the dimmer prospect of cooperation between the president and congress.

After the early October legislative election, neither Lula nor Bolsanaro could lay claim to a coherent, stable ruling coalition.

But, in a highly fragmented congress, arguably the blocs more likely to cooperate with Lula are smaller than those who will likely strive to protect the rightist political agenda until the next election in 2026. 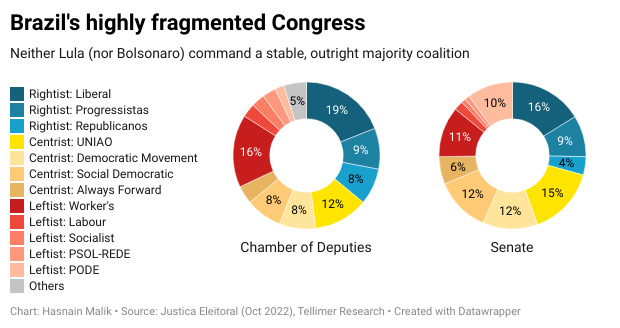 Brazil equities (Ibov Index) are up 14% ytd in total US$ return terms, far outperforming MSCI EM (down 29%). Brazil's currency is up 5% ytd.

Brazil's equities and currency are also cheaper versus historical averages than most large EM peers. 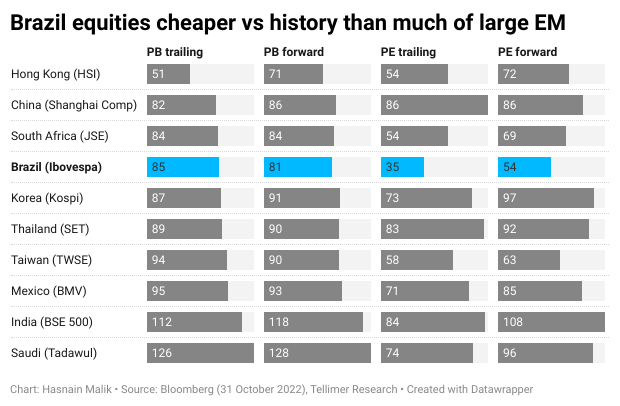 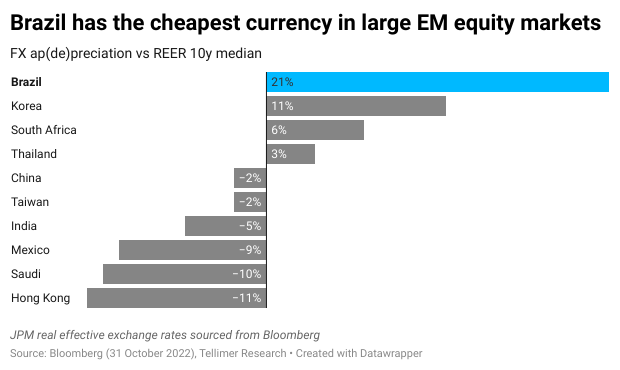 Brazil election risk: About how the loser concedes, not fiscal policy pivots, Sep 2022

Brazil’s Bolsonaro mimics Trump but a coup is unlikely, Sep 2021

Brazil's Lula returns; 5 reasons why this should not be feared, Mar 2021

Brazil: Congress leaders save Bolsonaro but may not help reform, Feb 2021