Brazil has a diverse fintech ecosystem, as befits Latin America’s largest economy and its primary destination for start-up funding. For this report, we have mapped over 400 firms – payments and lending firms comprise around half of the universe, but investech firms are also well represented.

As in other markets, 2021 was a record year for venture capital funding, with almost 40% of the US$9.4bn total directed at the fintech sector. Q1 2022 funding volume is up year-on-year, but the growth rate has slowed substantially, reflecting the more challenging macro environment (higher interest rates, greater global growth uncertainty), and fintech’s share of the pie has fallen to just 7%

Our proprietary global survey of 215 emerging market fintechs helps us place Brazil in a broader context. Local firms are faster-growing and more profitable. These factors help explain investors’ continued interest in the space.

Brazil’s fintech landscape comprises a broad spectrum of companies. At the aggregate level, the mix of operators has a similar profile to the broader emerging market fintech ecosystem, with payments and lending together accounting for 48% of the total fintech universe.

Fewer Brazilian fintechs are active in software solutions than elsewhere. Blockchain is also underweighted in Brazil, which is somewhat surprising given that Brazil has been one of the early adopters of cryptocurrency (it ranks 14th in Chainalysis' 2021 cryptocurrency adoption index).

Comparing the current ecosystem with our 2020 survey reveals an almost tripling of blockchain’s weighting in the system. At 4.9% of the population, exposure to cryptocurrency is around four times that of direct stock market exposure. 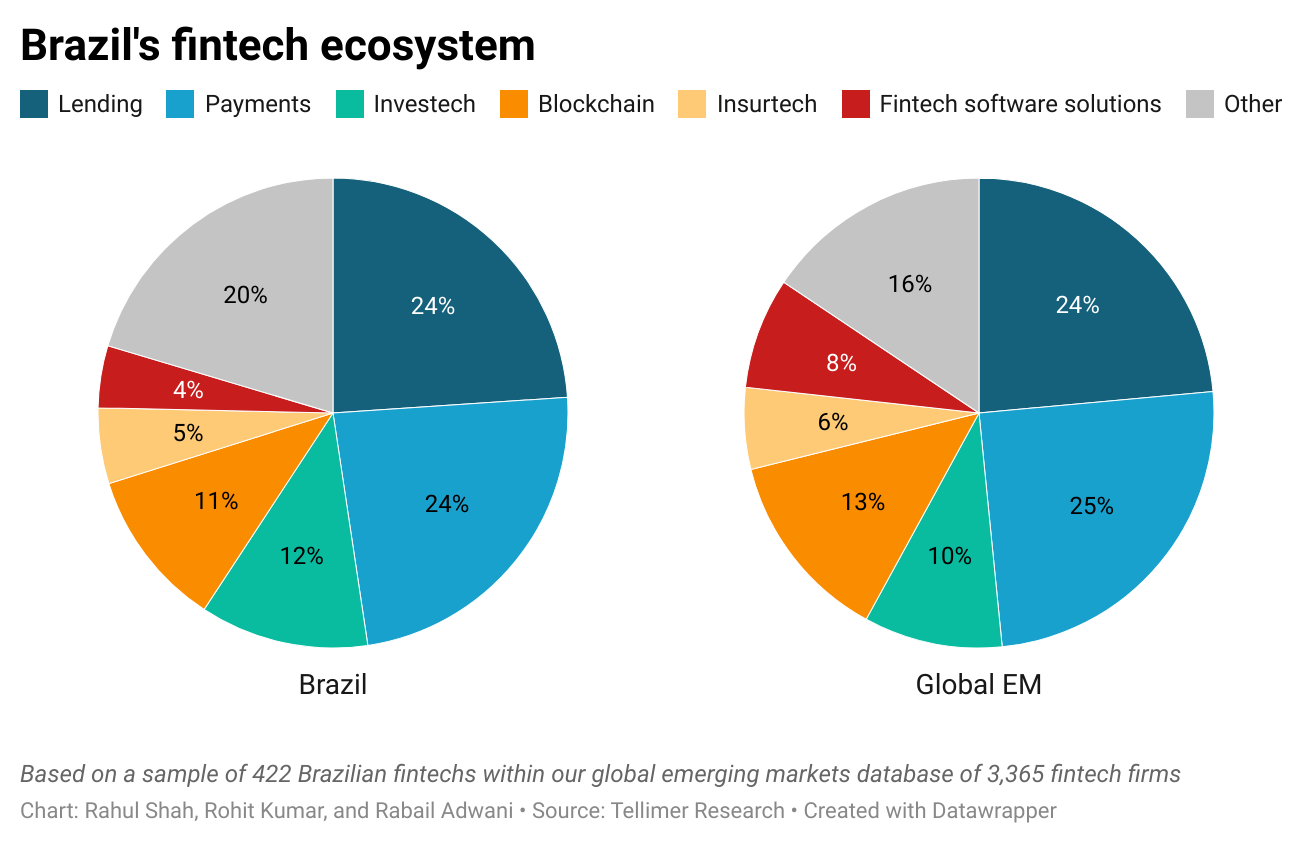 Fintechs attracted US$3.7bn 2021 venture capital investment (ie 39% of the total) across 176 deals (23%), more than any other sector. Retail tech was the second-largest destination, with US$1.4bn (15%) investment in 87 transactions (11%). Real estate received US$1.1bn investment but was surpassed by health tech in relation to the number of deals.

In Q1 22, venture capital investment has remained strong, up 4% yoy at US$2.0bn. However, the number of deals decreased to 167 from 200 last year. As for the industry mix, retail techs gained more attention from VCs than fintechs, raising US$163mn against US$142mn for financial services. 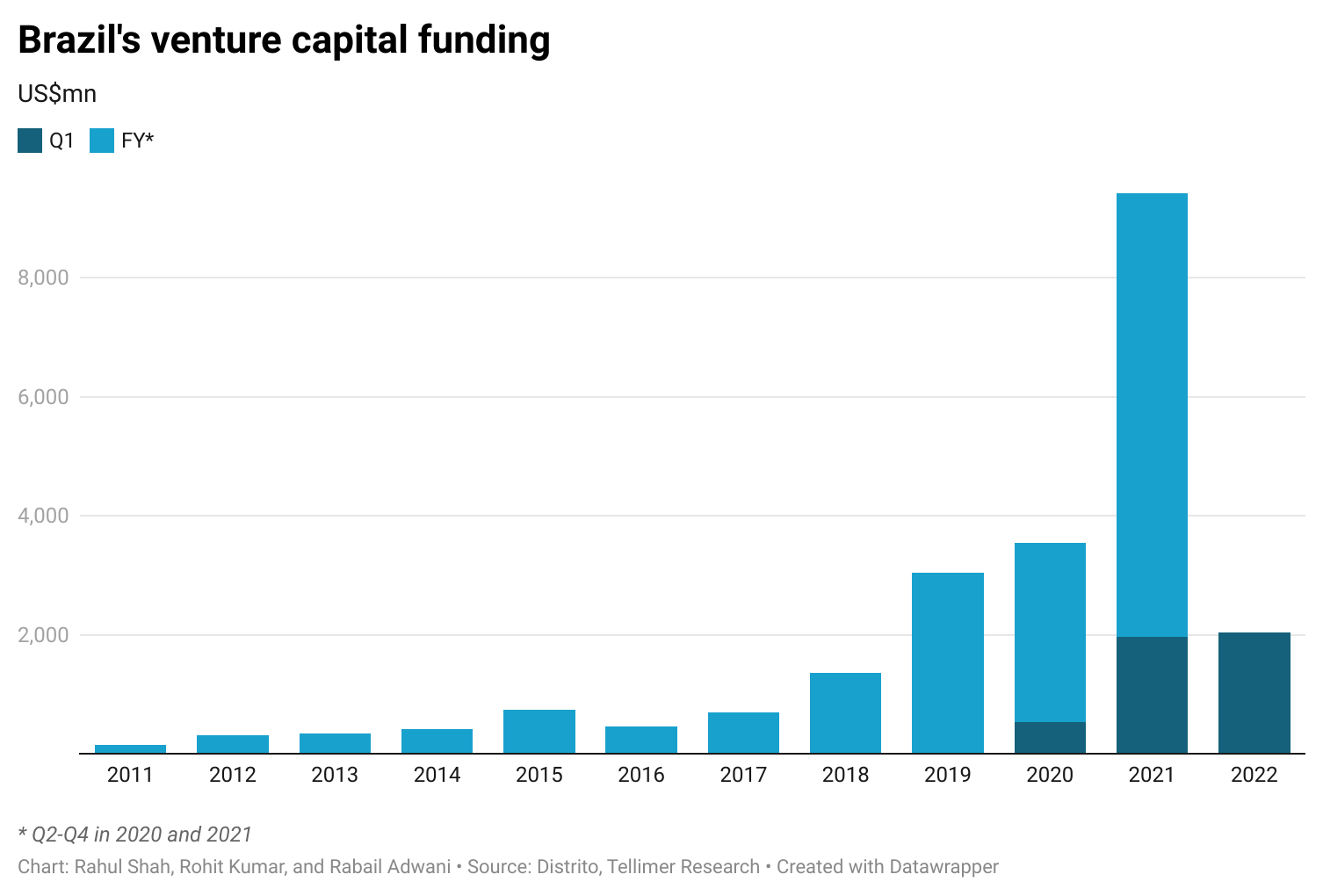 The Brazilian startup ecosystem is on a path to maturity, with 31 rounds above US$100mn in 2021. The largest deal was closed by Nubank (Series G, US$1.15bn), followed by another fintech, Ebanx (Series C, US$400mn). There were also two mega-rounds in the real estate sector, including Loft (Series D, US$425mn) and Quinto Andar (Series E, US$300mn). In retail tech, the largest deal was secured by Facily (Series D, US$250mn). 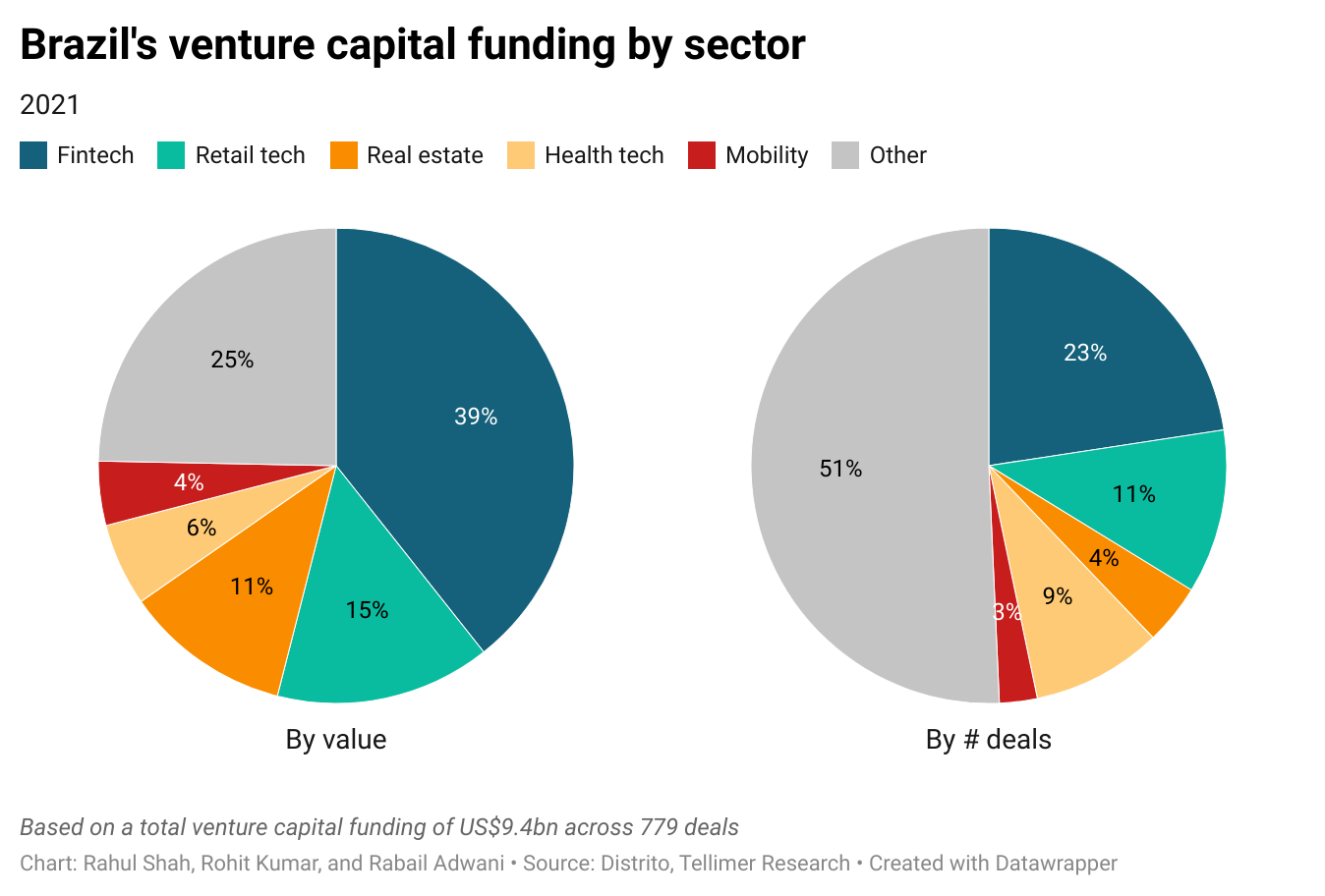 Brazilian fintechs have delivered faster growth than their EM peers

Our survey of 215 fintech firms across 14 emerging markets provides a good overview of performance differentials by sector and geography. Brazilian fintechs have outperformed across various growth metrics, in relation to the user base, top line and operating profit. Average revenue per user has declined, but less than for other emerging market fintechs. However, operating margins have compressed slightly, whereas, elsewhere, there has tended to be an improvement. 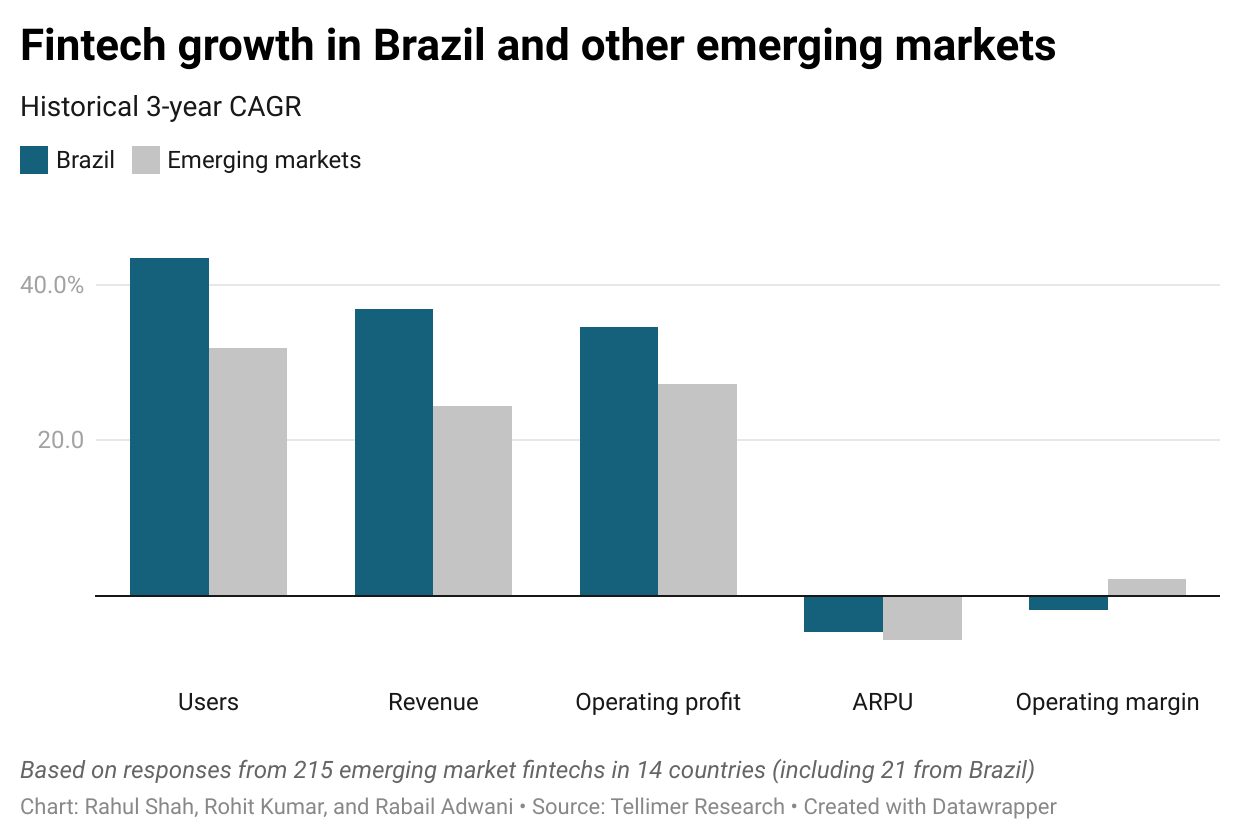 Brazil fintech profitability is better than elsewhere in emerging markets

Based on our survey, a much higher proportion of fintechs in Brazil are already profitable compared with elsewhere. Moreover, even those Brazilian fintechs that are not profitable expect to move past breakeven much sooner than fintechs in other countries.

Comparing our findings with our 2020 survey, the proportion of profitable fintechs has almost doubled, indicating that increased scale and other operational improvements are helping firms to deliver better financial performance to their investors. 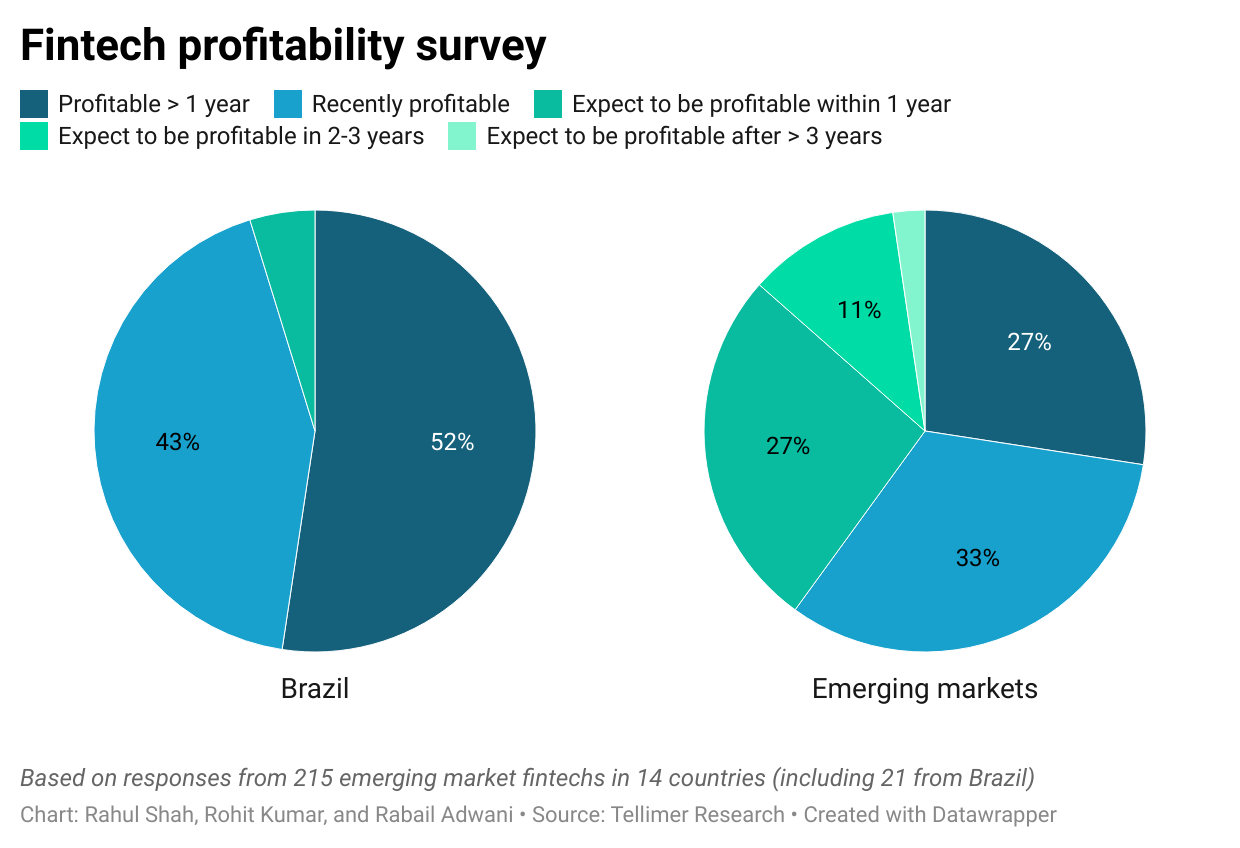