Brazil election risk: About how the loser concedes, not fiscal policy pivots

The latter's increasingly populist fiscal policy – eg the October 2021 Auxilio Brazil welfare plan – has helped narrow the gap, but it has not, it appears, decisively closed it.

According to PoderData's survey of voting intentions in a second-round run-off scenario, Lula's lead was 23 percentage points in September 2021. A year later that gap has shrunk to 9pp.

Lula's lead is larger, at 16pp, according to polling from Datafolha in September 2022, but even this is smaller than the 25pp gap seen a year earlier.

For Bolsonaro, the scars inflicted by his Covid mismanagement, corruption scandal and abrasive rhetoric (at times, climate change sceptical, sexist and critical of Pope Francis) run deep and are reflected in lower support, particularly among segments of the voting population that are younger, female or Catholic.

Both candidates are likely to pursue similar fiscal policies that lean towards populism rather than difficult structural reform, preserve central bank autonomy and struggle to push any radical legislation through a Congress that they do not control. The main uncertainty around the election is whether Bolsonaro, should he lose, will exit office in an orderly manner.

After his speech disparaging the judiciary and invoking a sense of all-or-nothing, during an Independence Day rally on 7 September 2021, his hardcore supporters came uncomfortably close to emulating former US President Trump's hardcore base when it stormed the Capitol in Washington in January 2021. 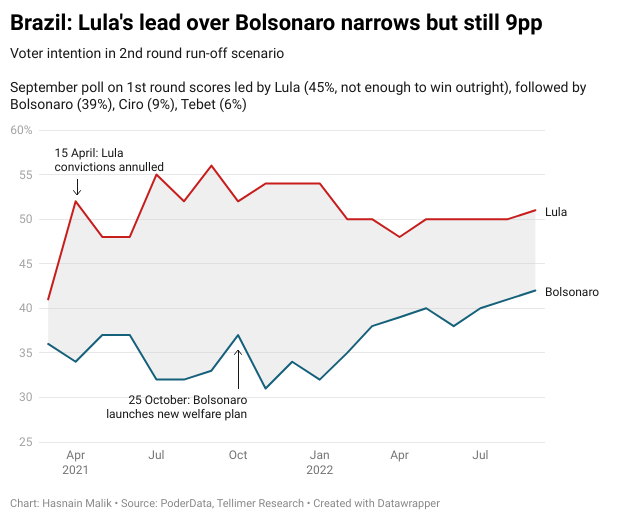 Fiscal policy unlikely to hinge on the election outcome

Brazil President Bolsonaro has not turned out to be the structural reformer that some hoped he would be. From a fiscal policy perspective, there is little risk of a leap from right to left as a consequence of this election.

Bolsonaro struggled to push reforms on tax and state-owned enterprises through the highly fragmented Congress at the start of his term. There is very little prospect of Congress consolidating into fewer, larger, coherent blocs as a result of this election and, whoever wins, the presidency will likely again struggle to pass any radical legislation. 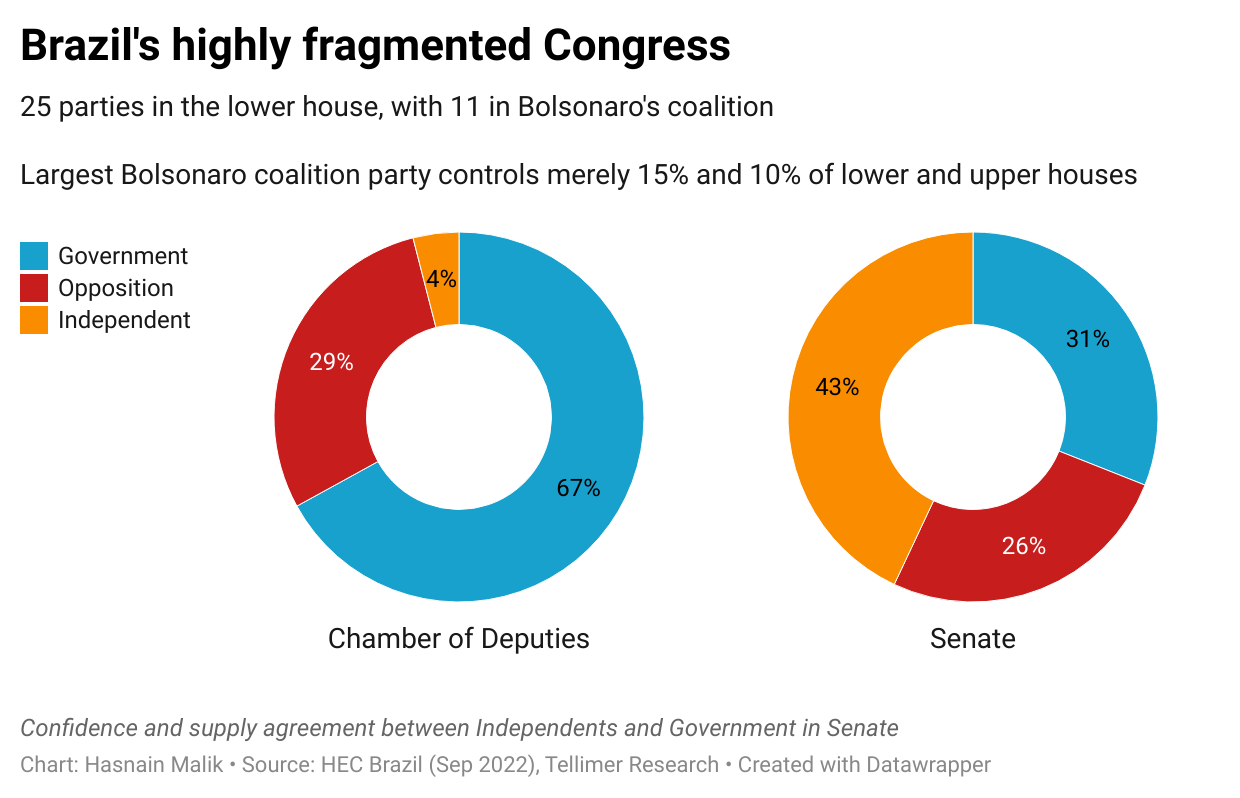 The next administration, whoever runs it, will not inherit a fiscal policy based on strict control of spending. Bolsonaro has tilted towards fiscal populism and welfare handouts to compensate for his mismanagement of Covid, Brazil's slowing growth and his falling popularity. The fiscal deficit and government debt remain as problematic as when he took office in January 2019. 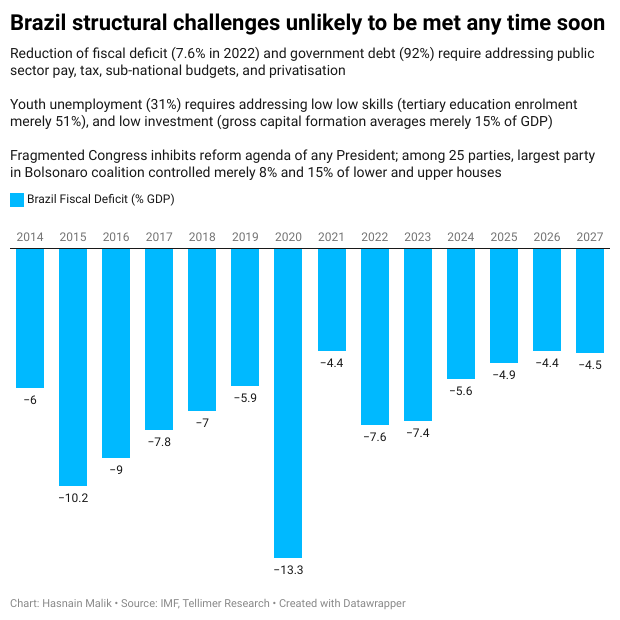 Furthermore, despite his leftist rhetoric and origins, Lula's previous stint as president, in 2003-10, was not accompanied by a fiscal policy spoiler for financial markets, albeit that was also an era of booming commodity prices, and, this time around, he has sought to bring more centrist voices (eg former Sao Paolo governor and presidential candidate, Geraldo Alckmin, and centrist former President Cardoso) into his fold. 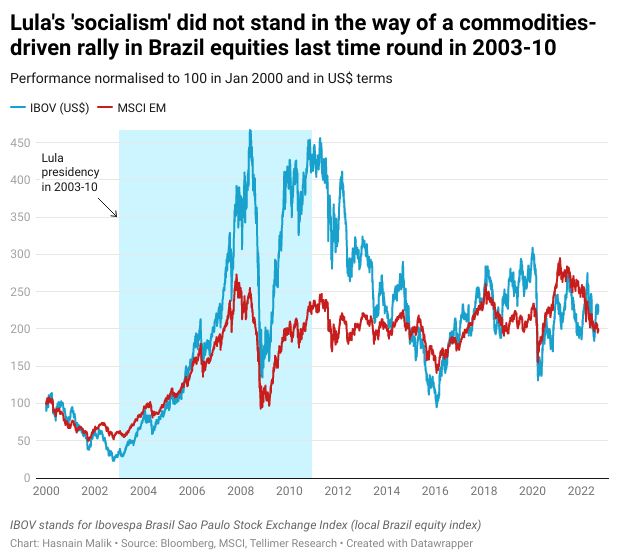 Brazil equities, measured by the local Ibovespa index, are up 11% ytd in total US$ return terms, compared with the 20% fall in MSCI EM. 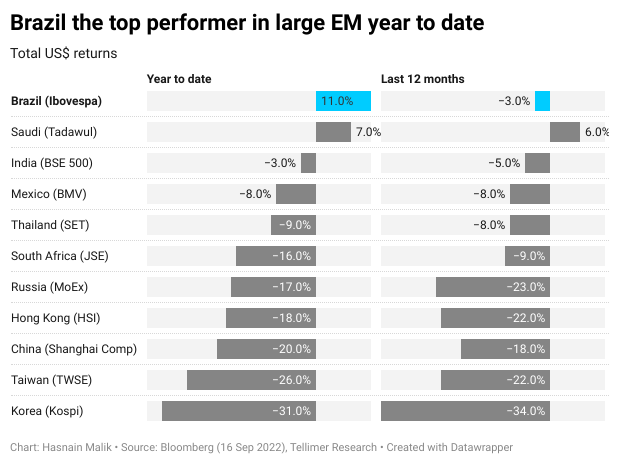 Amid US dollar strength, Brazil has, among EM, a unique combination of a positive real interest rate and cheap currency on real effective exchange rate measures. 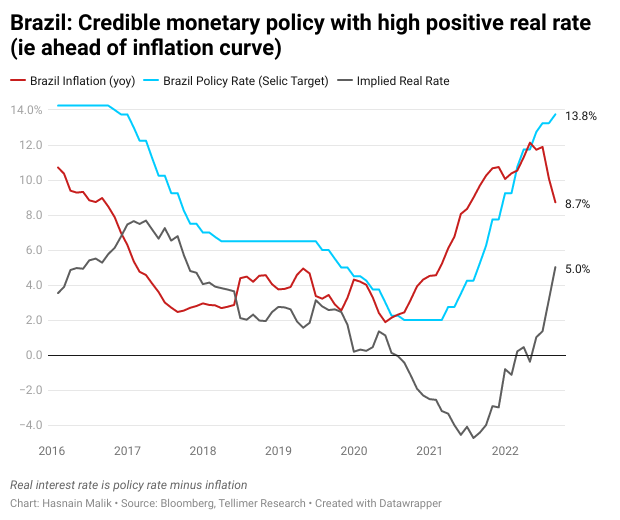 The trailing price/book of the IBOV index, at 1.6x for 25% ROE, is still cheap versus history (close to a 20% discount to the five-year median, compared with nearer 10% discounts in China, South Africa and South Korea, and 10-30% premia in India, Saudi Arabia and Taiwan). 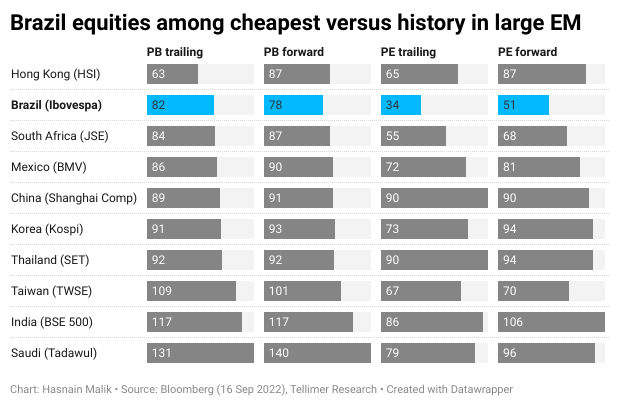 The US dollar dagger for emerging markets, except for Brazil, Sep 2022

Brazil: Much more to go for in EM's top performer despite low prospect of reform, Feb 2022

Brazil’s Bolsonaro mimics Trump but a coup is unlikely, Sep 2021

The Brazilian blowout in equities in 10 charts, Apr 2021

Brazil's Lula returns; 5 reasons why this should not be feared, Mar 2021

Brazil: Congress leaders save Bolsonaro but may not help reform, Feb 2021