In September 2020, BP announced a fundamental strategic reorientation. This isn’t the Beyond Petroleum of the 2000s, which was more about rebranding and focusing on gas. Rather, the market believes that BP is serious about becoming a net zero energy company by 2050 and shifting its business from oil and gas to renewables. Indeed, BP has sold off, reflecting concerns about falling dividends and the earnings implications as BP accepts single-digit returns on renewables projects while leaving double-digit oil and gas opportunities on the table. However, even if earnings fall, BP investors can expect to be well-rewarded through multiple expansion, while international oil companies (IOCs) that fail to effectively make the transition will see multiple contract, even if returns remain robust. The last rats on a sinking ship will get their choice of the stores in the larder, but that gourmandise will have a gruesome end as the ship goes down.

The benefits of BP’s pivot go beyond the modelled returns of its investments. While my former employer, Shell, has reportedly struggled to attract renewable energy talent, BP is said to have received a record 12,000 job applications since announcing its net zero target. Meanwhile, BP is likely to be able to retain ethically conscious investors, like the Church of England’s Pension Fund, which recently sold its position in ExxonMobil following the firm’s failure to set, let alone meet, climate targets. While BP may be in front among the IOCs making this transition, it is not alone: Shell, Total and Equinor are also on the energy transition path. Ørsted has fully completed the transition, having changed its name from DONG (Danish Oil and Natural Gas) in 2017, when it no longer owned any oil or natural gas assets, Danish or otherwise.

Figure 1: Ørsted's repositioning as a pure renewable player has had a huge impact on valuations 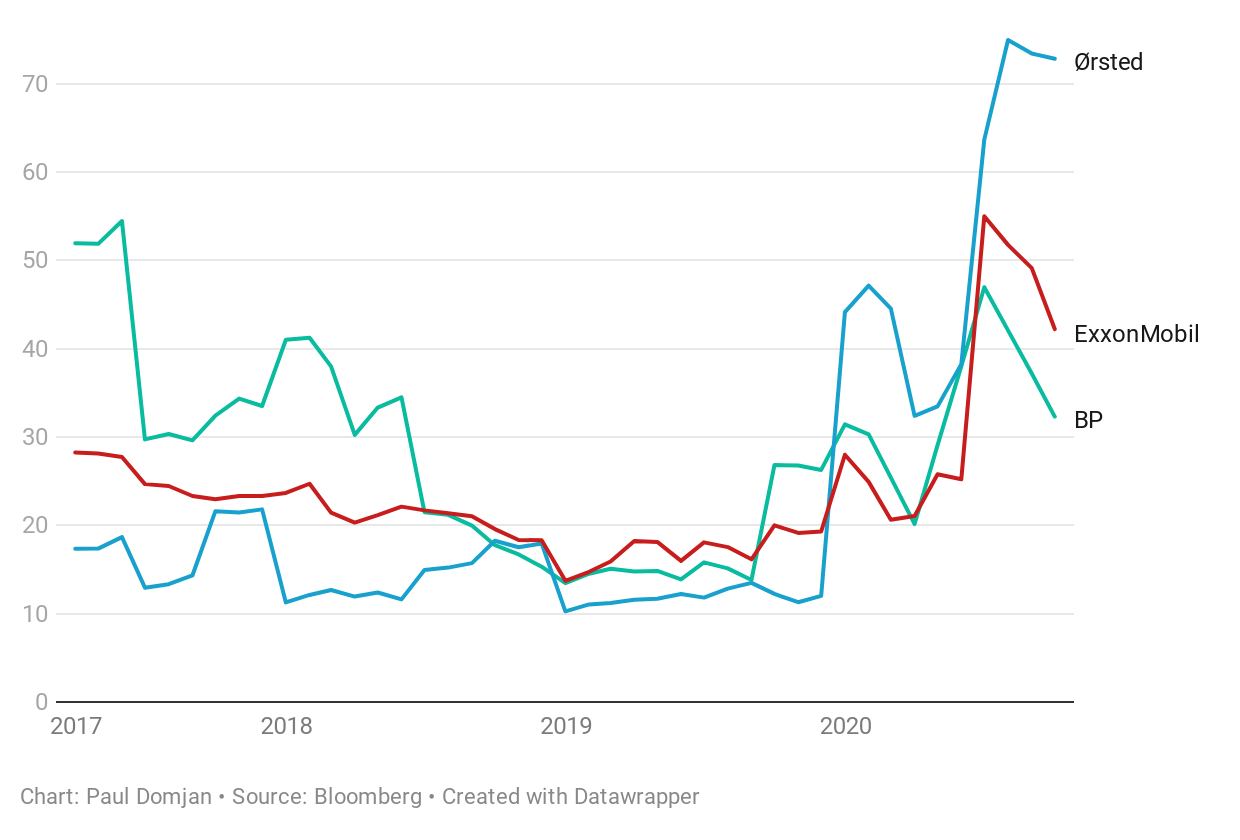 Plenty of ink has been spilled on what this means for BP as a company, and I won’t spill any more here. Rather, I want to explore two plausible scenarios for what BP’s transition—and the wider transition of IOCs from oil and gas to renewables—might mean for emerging markets. On the one hand, leaving oil and gas could allow BP, and other IOCs that follow its lead, the opportunity to focus on producing energy closer to their major consumers and leave behind the complexity and risk of operating across many and varied emerging markets. On the other hand, operating in emerging markets is a key skill for BP and its fellow IOCs, and their shift to renewable energy could lead them to open new emerging markets to renewables, just as they historically opened new emerging markets to oil and gas production. The former will lead to a considerable increase in political and economic risk, while the latter will create new investment opportunities. By tracking the leading indicators of these two outcomes, EM investors can position to avoid the risk of the former, or capitalise on the opportunity of the latter.

The importance of above-ground risk

I’ve known and respected BP for many years: as a formidable competitor when I was in strategy and planning at Shell, as a case study of local supplier development for my academic work on externalities of oil and gas production, and as a commercial partner in the US-led effort to provide options to allow Caspian countries to reduce their dependence on Russia when I was Energy Security Advisor to the US European Commander. Although BP certainly has made mistakes, most spectacularly the Deepwater Horizon disaster, generally speaking as a developing country with oil and gas resources, you certainly could do worse than to have BP develop those resources.

BP’s history, like that of other European IOCs, began in emerging markets, in BP’s case as the Anglo-Persian Oil Company, which first struck oil in Iran in 1908. William d’Arcy, who founded the company, didn’t go to the Iranian desert because he loved Iran—indeed, he mostly stayed in London and sent his chief engineer, explorer George Reynolds, to drill in the desert—but rather because that’s where the oil was. When I entered the oil industry the best part of a century later, the logic of “where the oil was” remained just as strong as ever: Shell sought me out because I was an expert on the political economy of the former Soviet Union, which was where the oil was. While the geologists and engineers managed the risk below ground, I lived in the elusive world of 'above ground risk', and when it came to above-ground risk, BP was among the best.

Above-ground risk matters because oil and gas production tends to be an economic, and a political, minefield. Indeed, if one follows the academic literature, the best thing the oil-rich countries could do with their oil is leave it in the ground.[1] Not only does oil wealth distort the economy by crowding out the production of other traded goods, but oil wealth distorts political competition by channelling resources to the ruling elite, reducing the prospects of democracy.[2]

Against this backdrop, I see at least two plausible scenarios for how BP, and others that follow in its footsteps, engage with emerging markets through this transition: Sigh of Relief and Seize the Advantage.

The complexity of long-distance electricity transmission means that the best place to produce renewable energy is as close as possible to the consumer. In the world of Sigh of Relief, IOCs welcome the opportunity to focus more of their effort on developed markets and distance themselves from the political complexity and reputational risk of going where the oil is. In BP’s case, investments close to home, like wind farms in the North Sea and solar farms in Texas, seem infinitely preferable to adventures in the deep waters of Angola and Azerbaijan. Where they already have significant downstream operations, as BP does in China, IOCs continue to do business, but in many cases, they find themselves competing with capable, and politically connected, national energy champions. Meanwhile, oilmen breathe a sigh of relief, but also of regret, as they board planes for the last time to return to Surrey, Aberdeen and Houston after years working abroad, thinking about how to reinvent themselves in the new, renewable energy world.

Even if the oil industry is in its end game, that end game will have many years to run, and countries with oil resources are not willing to pass up the opportunity of a last dash for an oil windfall. IOCs that remain active in oil, like ExxonMobil, will have their pick of new projects, but in practice reduced demand for oil limits exploration. ExxonMobil’s major new project in offshore Guyana proves to be the last major new oil basin to be brought onstream by a western company.

Rather, the leading role in the oil and gas industry in emerging markets shifts from IOCs to national oil companies and smaller, often private, western oil companies. The shift from majors to smaller and more cost-efficient oil companies happens in every oil province as the largest projects become depleted and more nimble companies come in to develop smaller fields and manage the end game. Now, this shift happens for the world as a whole.

This exacerbates the curse of national resources. At the same time as falling oil demand puts oil producing countries under pressure, the shift in oil production from IOCs that are constrained by public opinion and their shareholders to smaller, potentially less scrupulous, oil companies complicates politics. For example, while all the IOCs are represented on the board of the Extractive Industries Transparency Initiative, none of these smaller oil companies are.

Seize the Advantage was prompted by Tellimer’s Head of Industrials, Vahaj Ahmed, asking whether BP, with its new focus on renewables, could prompt governments in emerging markets to adopt a policy framework to attract foreign investment in renewable energy. In Indonesia, to take one example that Vahaj has looked at recently, policy failures mean that only 0.1% of energy production comes from wind and solar. Given how good they are at government relations, could IOCs lead the drive to change this as part of their pivot to renewables?

In Seize the Advantage, the answer is yes. BP realises that, while it can develop projects nearer to home, it will need also to work across the emerging world to maintain scale. Moreover, although existing solar and wind developers and utilities are able to compete with BP technologically in developed markets, BP’s skill at government relations, honed over a century of managing above-ground risk, puts it at a distinct advantage in emerging markets. Once BP and other IOCs realise this advantage, they push hard into emerging markets, courting and partnering with local utilities in the same way that they previously partnered with national oil companies.

The transition away from oil and gas is still chaotic in large, oil dependent, emerging markets, but IOCs do not walk away from these countries—rather they try to support the transition, especially in larger markets where they hope to play a dominant role in the power system. In Sigh of Relief, Shell sees Nigeria as a political risk from which it can finally disengage, but, in Seize the Advantage, it also sees Nigeria as a market of a quarter of a billion potential energy customers. Complex, yes, but worth trying to develop.[3]

BP’s strategic pivot is an important reminder that the end of the oil era is coming and, with it, tremendous dislocation for oil exporting emerging markets. Even though oil will still be produced for many years to come, changes in prices and market participants could drive economic and political risk far sooner. How this unfolds will be determined by many different factors, most of them in the control of the countries themselves. Nevertheless, the behaviour of the IOCs will matter in several ways. It will affect the course of the transition in oil producing countries. It could, as in the Seize the Advantage scenario, become a means of opening up renewable energy opportunities in more developing countries.

Investors will need to watch the macro implications, but this will also impact the investment attractiveness of the IOCs themselves. One of the biggest questions for any firm undertaking a fundamental strategic reorientation is whether it will be able to achieve a clear right to win in its new market. The jury is still out as to whether the IOCs will be able to do this, but engaging their considerable political nous to open up emerging markets to renewable investment could be one part of a winning strategy.

[3] BP has not been meaningful player in Nigeria since its Nigerian assets were nationalised in 1979.