Bonds, stocks, EM FX and even crypto rallies on softer-than-expected US CPI

Investors always knew that the inflation print had the potential to impact market sentiment quite heavily, and it did not disappoint. Coming in lower than market expectations, the inflation reading eases the pressure on the Fed to act quite as aggressively. Almost immediately, stock markets rallied to boost risk appetite, and higher beta currencies have found themselves appreciating strongly. The USD’s overvaluation is now unwinding and has a lot further to go.

Any signs of weakness in the upcoming economic data will only compound the USD’s sell-off. Also of interest is the outcome of the US mid-terms. Early indications are that the Republicans will regain control of the House while the Senate also remains in the balance. A more conservative government will ease the pressure on the Fed even further and elevate the possibility of a deeper USD sell-off. So, the EUR has surged back towards 1.0200/dlr, while the GBP is now trading at 1.1675. Even the JPY has made a strong comeback, dipping back to 141.90/dlr.

Africa: President of Senegal Macky Sall, who holds the African Union's rotating Chairmanship, has said that the AU expects to officially join the Group of 20 nations this month. The AU aims to use this opportunity to call on rich countries to honour their promises to tackle climate change, including providing developing countries with $100bn in financing each year, according to Sall. Sall added that "pledges haven't been fulfilled. There have been some efforts, but they have been below our expectations. When the AU joins the G20, we will be able to speak regularly to our partners." G20 nations are responsible for 80% of global emissions, while Africa accounts for less than 4%.

Kenya: Treasury Secretary Njuguna Ndung’u has said that the Kenyan government is in talks for a developmental policy operation loan (DPO) from the World Bank. Ndung’u stopped short of disclosing the amount being discussed but indicated that Kenya is talking to multilateral players such as the International Monetary Fund and World Bank for funds. Ndung’u added that markets are returning to normal, providing Kenya room for a syndicated loan if the need arises. If granted, it will be the fifth time Kenya has tapped the DPO facility in four years. Kenya received approval for $750mn in March after borrowing a similar amount in June last year, $1bn in May 2020, and $750mn in 2019.

Egypt: Finance Minister Mohammed Maait has said the International Monetary Fund (IMF) board is likely to discuss the four-year international financing program to support Egypt's economic reform next month. Maait added that this includes a staff-level agreement with the IMF under the Extended Fund Facility  at a value of $3bn, along with the $5bn package from several international and regional partners. Moreover, it includes the possibility of obtaining additional financing worth $1bn from the IMF's Resilience and Sustainability Trust.

Ethiopia: Headline inflation in Ethiopia quickened to 31.7% y/y in October from 30.6% y/y in September, halting the slowdown seen since the May high. Going forwards, risks to Ethiopia's inflation outlook remain tilted to the upside, high gasoline prices, a lingering drought, and dollar shortages that have weighed on the local currency.

Kenya: In a bid to achieve a significantly narrower budget deficit in the next financial year, 2023/24 (June-July), Kenyan officials have said that the government is reducing its rate of borrowing. The Ruto administration is revising its budget for this fiscal year to reduce expenditure by KES 300bn ($2.47bn) and aiming for a recurrent surplus in three years. Moreover, the finance ministry has indicated that the new government is planning to set a budget deficit of 4.3% of GDP in the next financial year. The revision of this financial year's budget is expected to reduce the projected budget deficit to 5.8% of GDP from the initial 6.2%. According to the ministry, the push to reduce borrowing is aimed at supporting debt sustainability and boosting lending to the private sector.

Rwanda: Urban consumer price inflation in Rwanda accelerated to 20.1% y/y in October from 17.6% y/y in September. The October print was the fastest pace of price growth in the economy since at least February 2010, according to data published by the National Statistics Institute, and was driven by food and non-alcoholic beverages prices. Specifically, food and non-alcoholic beverage inflation accelerated to 39.7%. Meanwhile, housing, water, gas, electricity, and other fuels inflation rose to 8.9% on the year. Month-on-month consumer price inflation quickened to 2.7% versus 2.1% in September. Inflation in Rwanda remains robust and is more than double the upper limit of the central bank's 2%-8% inflation target. Therefore, we could see the central bank, which is expected to meet this month, raise the policy rate. The central bank has already raised the key rate twice this year to 6%.

Zimbabwe: The Zimbabwe Chamber of Mines has cast a bleak outlook on the mining sector, a significant contributor to foreign exchange income. Specifically, miners face rising costs and persistent electricity shortages, which will impact the sector's growth prospects in 2023. The sector is projected to experience a slowdown in growth to 7% next year from 8% forecast for 2022. Meanwhile, mining costs are projected to increase by 15% next year, with energy being the main driver.

While the Southern Africa FX basket has been a mixed bag against the USD month-to-date, it is clear that the Zambian kwacha is the laggard. For context, the kwacha has recorded losses against the USD while the South African rand and Botswana pula have chalked up gains. The Mozambican metical, meanwhile, has been relatively unchanged. Zooming out on the Southern Africa FX basket tracked by ETM, it is worth noting that the rand and pula are ranked first and second, respectively, in terms of the best-performing African currencies in November. 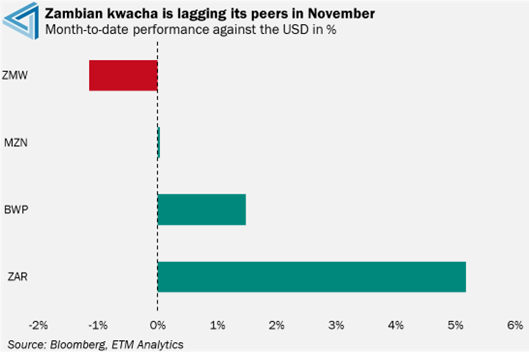 The USD/ZMW has trended higher since the lows reached at the beginning of September when the currency rallied after news that Zambia had secured a long-awaited approval for a $1.3bn International Monetary Fund support package. Since that September low, the USD/ZMW has risen by more than 6%, with strong dollar demand against a backdrop of limited supply primarily driving the weakness. With hard currency demand continuing to outweigh supply, the kwacha is set to extend losses into next week.

While the kwacha has come under some selling pressure, it is worth noting that on a year-to-date basis, it remains resilient and is ranked second among the handful of African currencies that have gained against the USD this year. That said, given how overvalued the currency is and the fact that there remains a lot of work to be done for Zambia to restructure its debt, the room for further gains is limited.

Bond counters were a sea of green on Thursday as traders slashed their outlook for how high the Federal Reserve will raise interest rates following the softer-than-expected US CPI print. Headline US inflation came in at 7.7% y/y in October compared to 8.2% y/y in September, suggesting that inflation may have reached its peak in the US. US inflation is now at its lowest level since January. 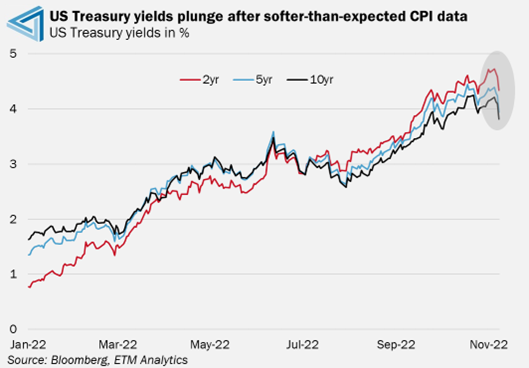 The downside surprise prompted some significant movements in the rates market. Swap traders slashed bets of another 75bps rate hike in December to almost zero while continuing to prices in a 50bps hike for the final FOMC meeting of 2023. The terminal rate or implied peak of the current hiking cycle was reduced to 4.9%, levels last seen in May. The market-implied terminal rate was trading just below 5.10% ahead of the CPI release.

The market reaction to the US inflation data was aggressive, with the slowing inflation reassuring the market that we will see a pivot in the US monetary policy in 2023. US Treasuries posted their best single-day performance on Tuesday since the outbreak of the Covid-19 pandemic, with the 2yr, 5yr and 10yr yields down 25bps, 30bps and 28bps, respectively, on the session. While cash Treasuries are shut today as a result of a US holiday, 2yr futures have held the previous day’s gain in Asian trading. Yesterday’s softer-than-expected inflation data fueled bets of a re-steepening of the yield curve as traders readjust their interest outlooks.

Inflation is a hot topic for financial markets at the moment. While much of the focus for markets was on the US CPI release, we also had inflation data out of Egypt, a country that has been hit hard by the effects of the Russia-Ukraine war on global commodity prices. The data released on Thursday showed that inflation pressures in Egypt remain robust, with headline inflation quickening to 16.2% y/y in October from 15% y/y in September. 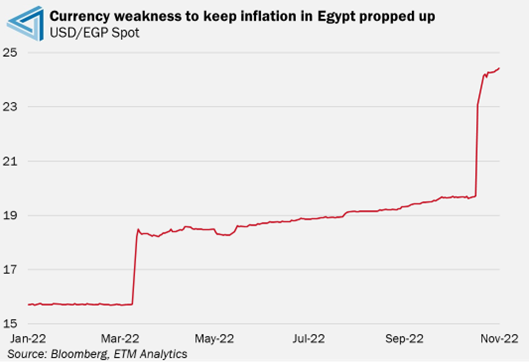 A breakdown of the data showed that food costs, the largest component of Egypt’s CPI basket, remained the primary driver of inflation in October. Food inflation increased by 23.8% y/y in October, as import bills continue to rise due to currency weakness. Core inflation accelerated to 19% y/y in October from 18% y/y in September. Egypt's core inflation suggests that inflation pressures are board based.

Looking ahead, inflation in Egypt is expected to remain robust in the months ahead following the sharp depreciation in the currency, which has lost more than 55% against the USD since the start of the year. While inflation and inflation expectations continue to soar, it is worth noting that Egyptian Eurobond yields continued to fall yesterday as optimism surrounding the adjustment in the global rates outlook outweighed concerns over the domestic inflation outlook.