One of the central topics for policymakers at the IMF/WB Spring Meetings this week will be tackling growing debt vulnerabilities, especially in emerging markets and developing economies (EMDEs). No doubt one key item on this agenda will be the need for improvements to the Common Framework for debt treatments beyond the debt service suspension initiative (DSSI). The IMF has already made a number of recommendations.

The IMF will also be able to tout a new part of its lending toolkit, the Resilience and Sustainability Trust (RST), which is intended to amplify the impact of last year’s SDR allocation by providing policy support and affordable longer maturity financing to low-income members as well as most middle-income countries and all small developing states. The RST, which aims to be at least US$45bn in size, comes into effect on 1 May 2022.

But in the same way that we believe official sector thinking over the role of private sector creditors in resolving sovereign debt defaults has been dominated over the past two decades by the holdout problem, based on the experience of Argentina, it risks repeating the same mistake if it fixates – and generalises – on the perceived lack of private creditor participation in recent debt treatments because of a small number of very specific cases. We think such a belief is based on a misleading reading of the experience of the Common Framework candidates so far, which would be a bad way to inform policy.

The Common Framework has got off to a slow start. So far, only three countries – Chad, Ethiopia and Zambia – have made requests for debt relief under the Common Framework and each has experienced severe delays. Over a year since the first requests were made, none of them have finalised a Common Framework debt treatment, although Chad appears to be the most advanced.

And this is the same three that started the process last year. There have been no further requests, we suspect much to the consternation of the official sector, perhaps as indebted countries wait to see how the initiative actually unfolds in practice. Indeed, rather than encourage others to follow, perhaps the mixed reaction to Ethiopia’s request deterred others from doing so.

Implementation of the Common Framework has largely been held back by coordination failure amid an increased diversity of creditors, although domestic factors have also played a part.

The IMF noted in December 2021, based on the experience so far, that the Common Framework is yet to deliver on its promise and must be improved. The Fund makes four recommendations:

Crucially, quick action is needed to build confidence in the Common Framework – and to show it off as a success – as the official sector steps up its efforts to implement it in a timely, orderly and coordinated manner, as recently pledged by the G20, which this year is under the presidency of Indonesia. We suspect resolving the first case will send an important signal to others. 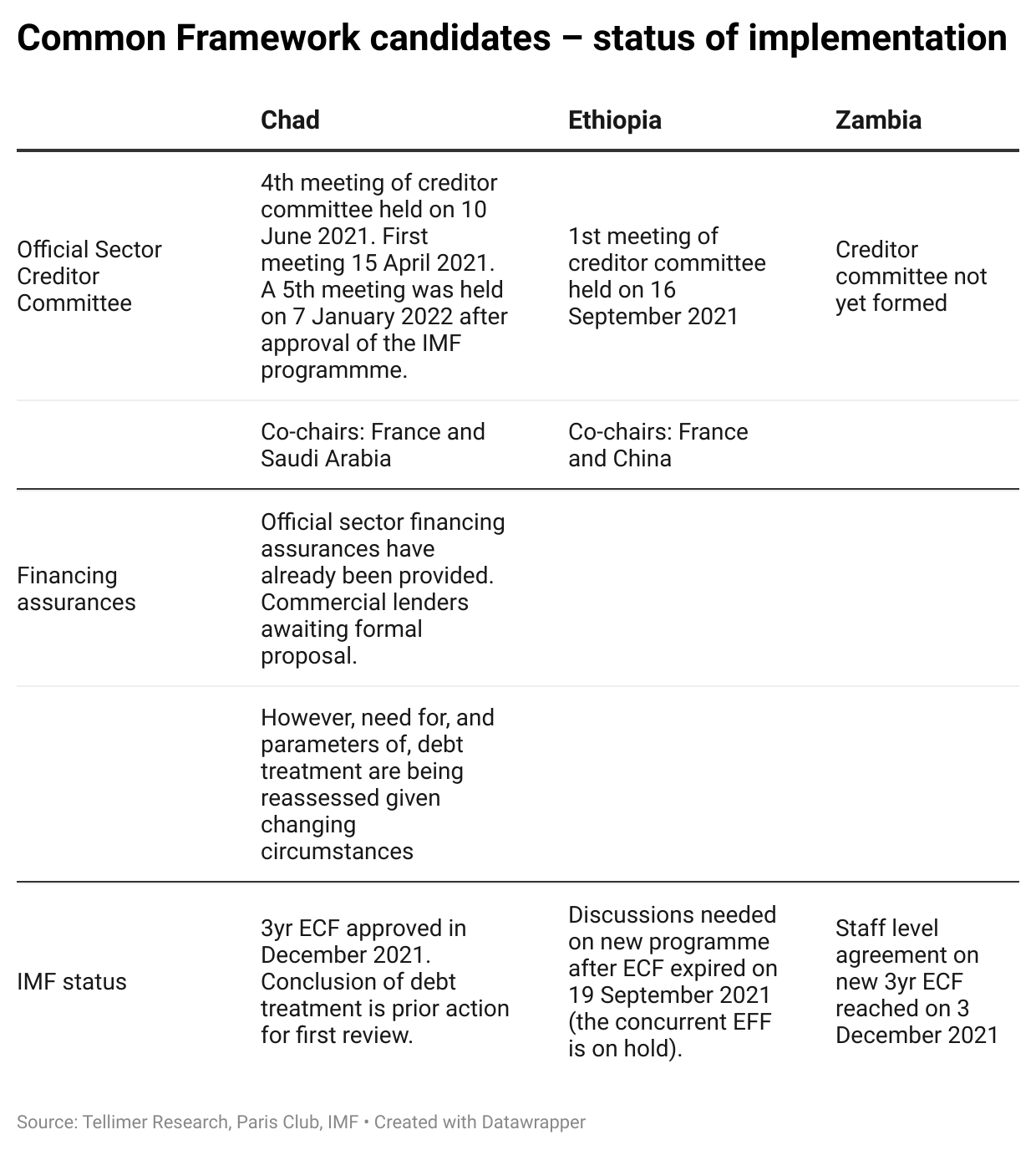 Role of the private sector

We suspect the slow progress of the Common Framework, together with the legacy of the lack of private sector participation in the now-expired DSSI, is fostering official sector concerns vis-à-vis the participation of private creditors in future debt restructurings, and perhaps even stirring anti-private sector attitudes in some quarters.

Of course, private sector involvement (PSI) in DSSI was voluntary and few countries actually sought it from bondholders due to well-trailed concerns over loss of market access and the impact on their sovereign rating. In the end, the official sector came to accept the lack of PSI in DSSI through gritted teeth.

But the memory remains; the G20 FMCBG Communique on 17-18 February serving as another recent reminder, noting “the lack of private sector participation” in DSSI.

The official sector, or at least some in the official sector, evidently still has a bee in its bonnet about the willingness of the private sector to participate in restructuring (or perceived lack thereof), in the wake of DSSI. We think this view risks becoming more entrenched in the post-DSSI era of the Common Framework and, once established, it may be hard to dispel. For example, see here and here.

For example, yesterday's communique from the Intergovernmental Group of Twenty-Four on International Monetary Affairs and Development, a developing country forum on international economic affairs, explicitly highlighted its concerns in the context of the Common Framework, calling for measures to "increase the participation of private creditors" (although without specifying where, and in what way, it thought participation had fallen short). Others argue that the official sector will provide debt relief, but it is the private sector that is the problem.

We think this is misleading:

In so doing, just as the official sector has been fixated on holdouts – and the threat of litigation – since Argentina’s 2005 restructuring (even though Argentina was the exception rather than the rule), we think it is now in danger of making the same mistake if it becomes fixated on the perceived lack of private sector willingness to participate in debt restructuring based on recent experiences. That, to us, is not born out by the evidence.

True, the Argentina experience prompted some welcome improvements in the sovereign debt architecture, with the widespread adoption of CACs in NY law bonds (and later aggregation) as a contractual solution to the problem; albeit features that, later, Argentina and Ecuador sought to abuse in 2020. Yet, the official sector conveniently forgot about Argentina's egregious behaviour (although the IMF and Paris Club may have got a taste of this over the past two years).

However, recent restructurings (eg Ecuador and Belize, and even Argentina) wrapped up fairly quickly, with constructive bondholder engagement, and no holdouts (partly due to CACs of course), and, where they have taken longer (eg Zambia) or were more convoluted (eg Argentina), the issues reflect other factors rather than bondholder intransigence. In fact, the biggest determinant in our minds of a “holdout problem”, or bondholders' willingness to engage, is debtor behaviour, and those sovereigns that are willing to act in a cooperative and good faith way, in accordance with the Principles, are better able to bring bondholders along with them.

But, at the heart of the issue, under any restructuring (Common Framework or not, but more so under the untested Common Framework), is sequencing amid the concern that the official sector and IMF will shape the restructuring in tandem and present it to private creditors as a fait accompli, who are then criticised unfairly for not being willing to participate if they don't like it. Early engagement is preferred. But there is inevitably (and has always been) a circularity between the IMF, official creditors and private creditors, as each side wants to wait to see what the other is willing to do, and both creditor groups wait for the IMF programme design, which itself depends on financing assurances, while bondholders are reluctant – and even unable – to agree to anything until the official sector decides what it is doing. But private creditors stand ready to participate (and, with bonds generally then at distressed prices, know they will have to do something), and often organise pre-emptively, either formally or informally, but are prevented from doing so due to sequencing of the process and official sector delays.

There is though another lesson from recent experience and that is to do with the asymmetry of information, and the lack of (or slow) information sharing, between the debtor country and official sector with commercial creditors, which the public sector could also seek to improve.

Why does this matter?

We think any perception about the lack of private creditors' willingness to participate matters because the Common Framework will likely become the template for future sovereign debt treatments. There is no sunset clause, so it may be around – in an expanded format – for some time. And, if the official sector believes the private sector is dragging its heels, and is reluctant to participate, it could seek a more coercive approach (less carrot, more stick).

And this is important because, as the IMF has recently warned, sovereign debt restructurings are likely to become more frequent as more countries face debt vulnerabilities. This is, in part, a result of the post-pandemic rise in public debt burdens, which could be exacerbated for some by spill-overs from the war in Ukraine and the impact of rising global interest rates.

Low income countries are especially vulnerable, although not exclusively (eg Sri Lanka, Tunisia and El Salvador). The IMF says 41 DSSI-eligible countries (c60% of those eligible) are at a high risk of debt distress or are already in debt distress (although World Bank data suggest 36). 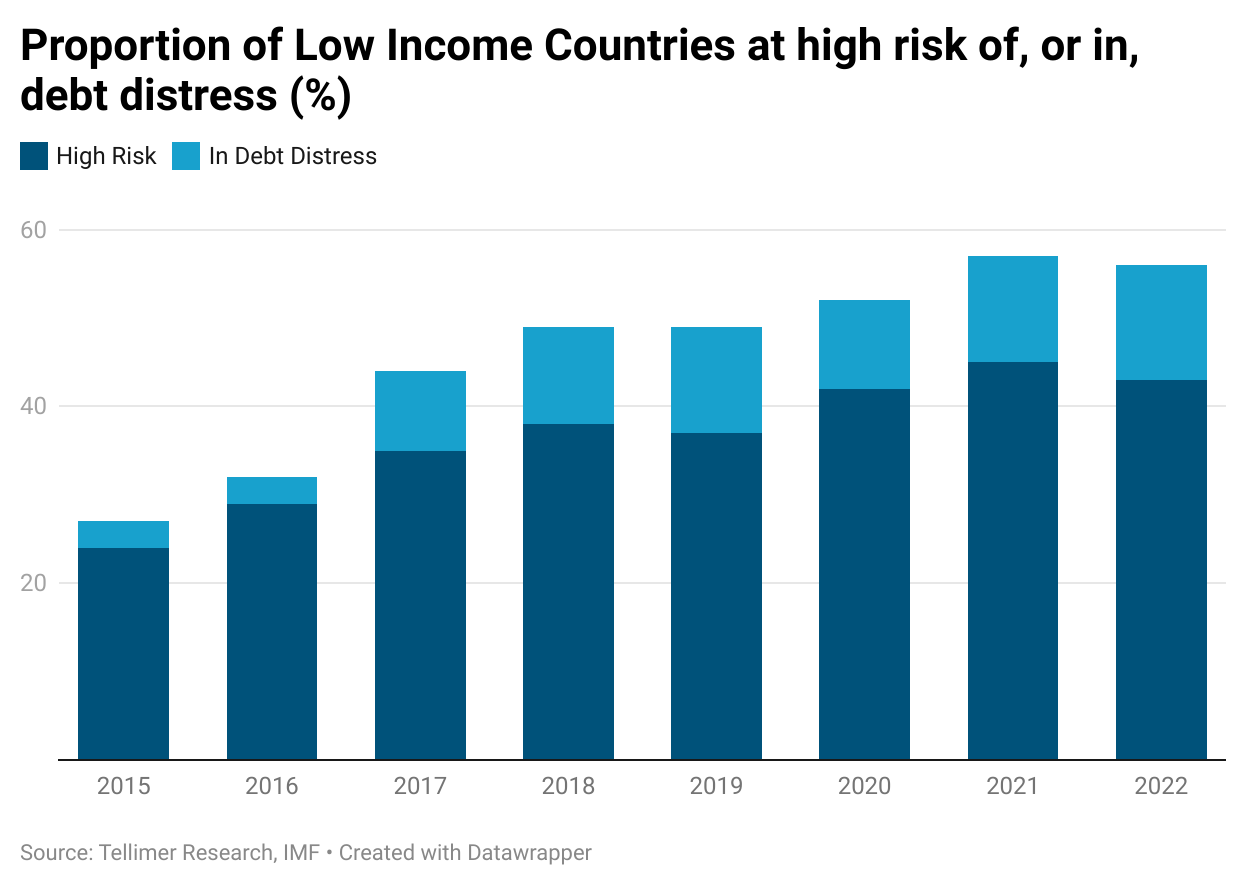 What will matter more for investors is that, of these, we count 14 as having eurobonds (ie those LICs that are classified as either being at high risk, or in distress or having requested a Common Framework treatment, which have foreign bonds).

And if the Common Framework is expanded in scope to include other countries, that will inevitably widen the field of potential candidates for eurobond restructuring. 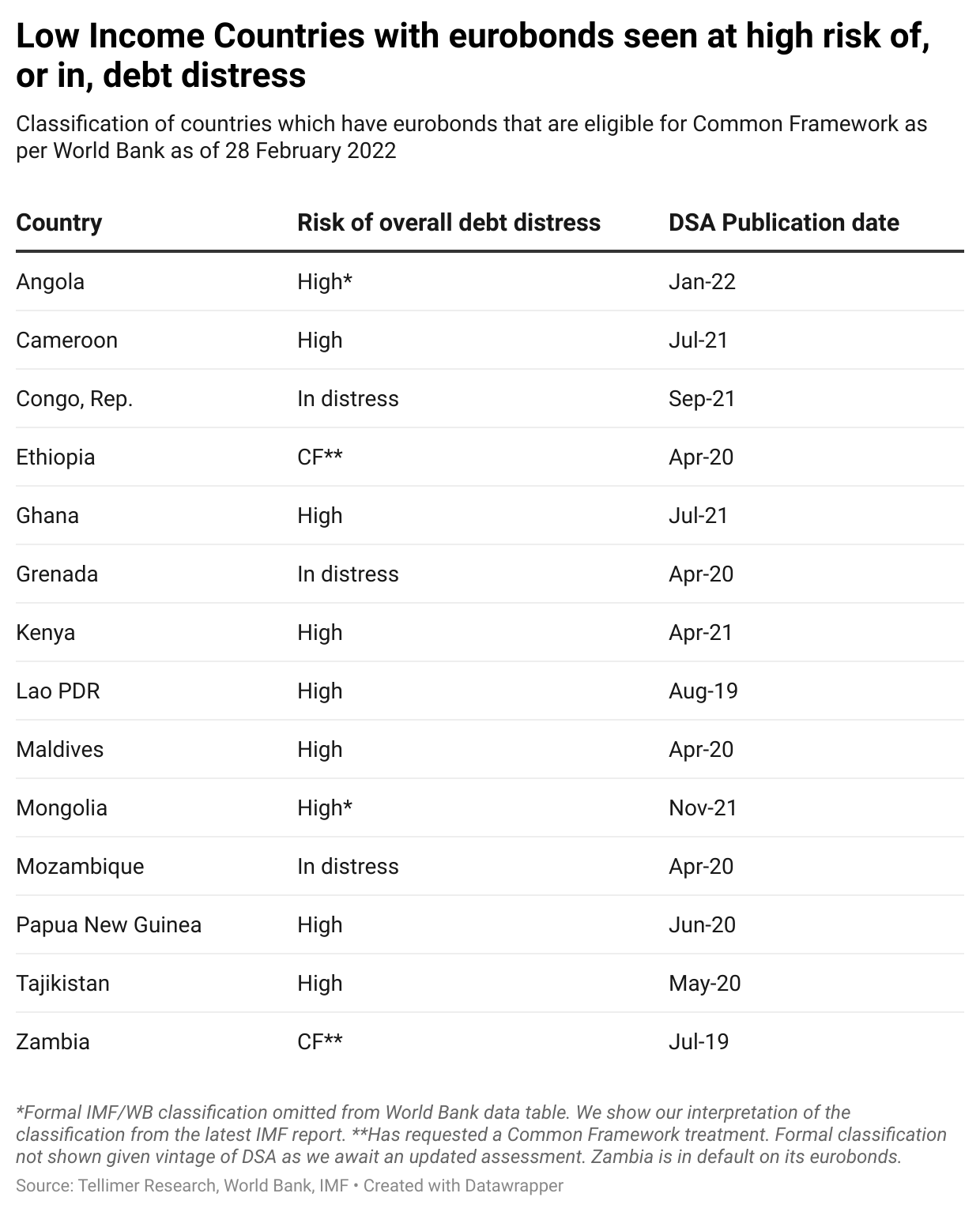 Having said that, the Common Framework – unlike HIPC – can treat liquidity and sustainability cases, so it is difficult to generalise over what a Common Framework treatment will look like, and what that might mean for recovery prospects.

Moreover, providing the Common Framework, or an expanded version, is implemented equitably, with fair burden-sharing across creditors (including all bilateral creditors), and in a transparent manner, and a treatment is not presented as a fait accompli to commercial creditors, the requirement for an IMF programme should actually be of help to bondholders (and essentially takes us back to how things used to happen, in the context of traditional Paris Club agreements, before some debtors chose to restructure ahead of, or outside, any IMF programme; the Common Framework incentivises those to request it to get a more comprehensive deal, and reduces the risk of creditor free-riding, and could penalise those debtors that seek to go it alone and cut bilateral or piecemeal agreements). This could presumably help the sequencing issue (and remove the situation we saw recently with Argentina, which put the cart before the horse by prioritising its bond restructuring, and pressurised bondholders, rather than commit to a credible economic programme first, as the IMF stood by).

It might also be interesting to see how non-Common Framework restructurings progress relative to Common Framework treatments; starting with Sri Lanka, which may technically be outside the initiative, but shares many characteristics – in terms of the presence of non-traditional bilateral creditors – of those that would be eligible, and that therefore might face similar obstacles in terms of official sector participation as we've seen in the Common Framework cases, regardless of the framework in which it is done.