In Brazil, the last time that leftist Luiz Inacio Lula da Silva and centrist Fernando Henrique Cardoso shared a united cause it was in opposition to the military dictatorship of 1964 to 1985. On 21 May, they appear to have reunited in their opposition to incumbent far-right President Bolsonaro (who, incidentally, in 2019, reinstated the commemoration of the 1964 coup).

With the next general election due by October 2022, and given the dashed hopes for structural reform and the cheap valuation of the equity market relative to history, this should not be a cause for alarm. (Brazil is about 5% of the MSCI EM equity index). 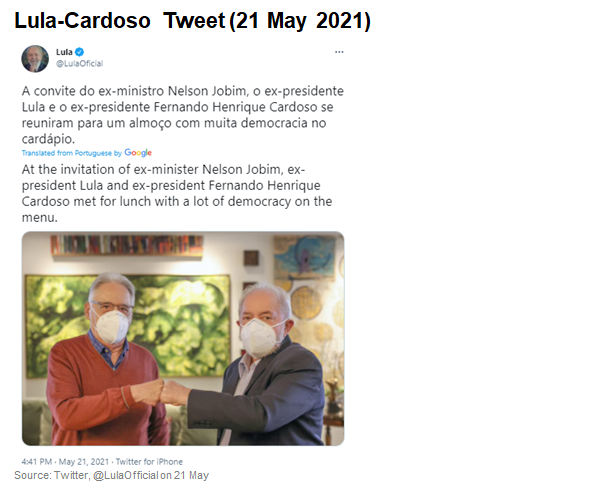 The political resurrection of Lula – following a favourable legal ruling in March 2021 against his prior disqualification for running for office – and this unification of diverse parts of the opposition are compounding the challenges facing Bolsonaro, who is already suffering the fallout from mismanagement of the Covid-19 crisis and the tapering of the fiscal stimulus of last year. Bolsonaro's net disapproval rating and the lead of Lula over Bolsonaro are each about 20 percentage points. 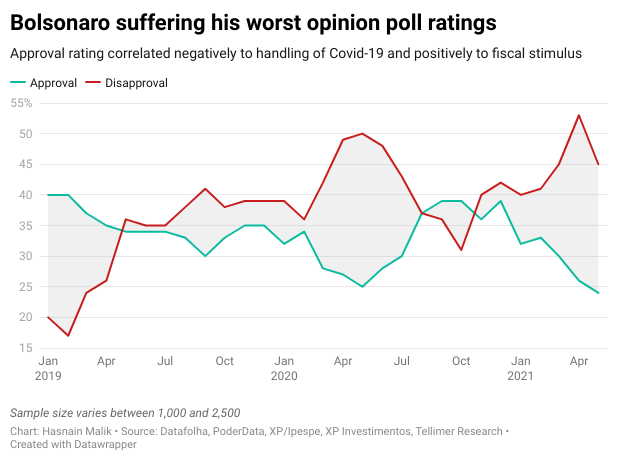 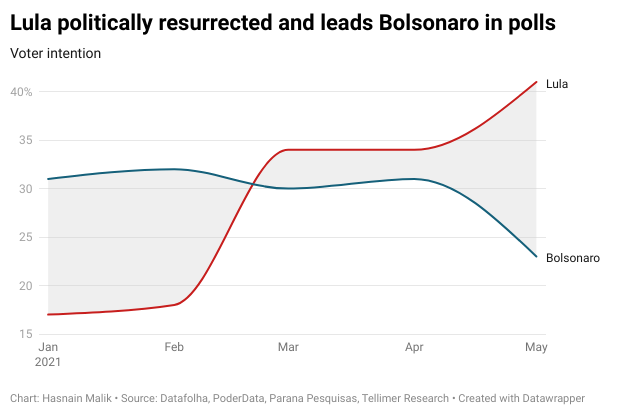 There is no immediate threat to the ruling coalition in the highly fragmented lower house of the Congress. However, the interest and effectiveness of the Bolonaro government in reform has already waned.

Bolsonaro's coalition government (of six parties, none of which are directly controlled by Bolsonaro) has merely 29.6% and relies on 37.2% of confidence and supply from a group of 7 parties.

Cardoso's Social Democracy Party control 6.4% and their potential exit from the confidence and supply group would not, on its own, break the government in the legislature.

Lula's Workers' Party is the largest opposition party with 10.1%.

Bolsonaro is no longer a reform hope anyway

In response to the higher probability of a swing to the left at the next election (Lula was also leading opinion polls before his disqualification from the 2018 election), five factors argue against the sort of fears evident in LatAm peers (eg Chile, Colombia, Peru).

Politics is already a headwind and if the commodities tailwind persists then the precedent of his last tenure suggests Lula's return should not be so feared. 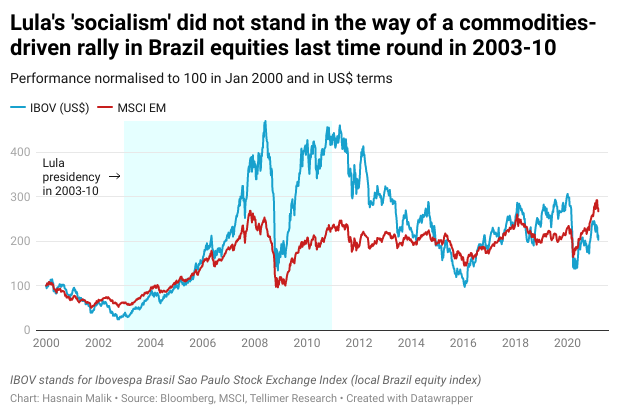 The Brazilian blowout in equities in 10 charts, April 2021

Brazil's Lula returns; 5 reasons why this should not be feared, March 2021

Brazil: Congress leaders save Bolsonaro but may not help reform, February 2021