Bitcoin sets sights on US$120,000, but volatility remains high

The fact that the only logical method of plotting the Bitcoin price over a multi-year horizon is with a log scale speaks volumes about the magnitude of its price movements, both on the upside and the downside.

Our machine-learning model forecasts a break of US$100,000 within the next four months, followed by a 65% drop to US39,000 going into the end of 2021. A move down to this area should once again attract enough buying to catapult prices back to all-time highs at the beginning of 2022, with the 12-month projection being US$120,000 – around a 100% increase from recent levels.

The eight-year logarithmic channel depicted on the price chart above has been highly influential, with it accurately pinpointing the 2020 turning point of US$4,001, which ultimately led to where we sit today, at cUS$56,000. We can expect this channel to continue to influence price action, with the top of the channel sitting at close to US$500,000 at the end of the 12-month projection.

This sort of valuation may reek of over-exuberance and perhaps even be labelled as a fantasy; however, taking a look at the historical returns and volatility highlights its plausibility. 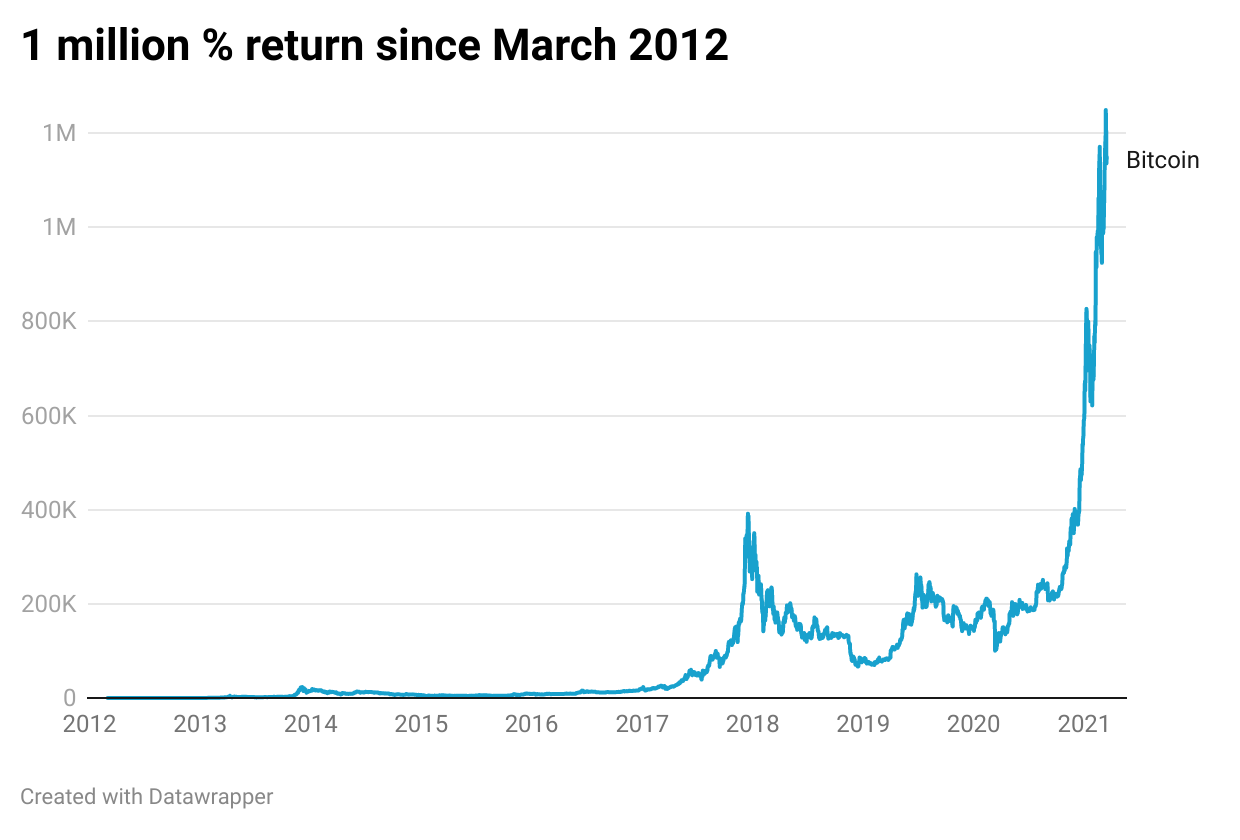 To gain a better perspective of the wild swings in Bitcoin, let's take a look at the Bitcoin performance over each year since 2011. Years 2014 and 2018 experienced drops of 58% and 70%, respectively, but the good years have more than made up for it, with the compound annual growth rate (CAGR) being 189%. 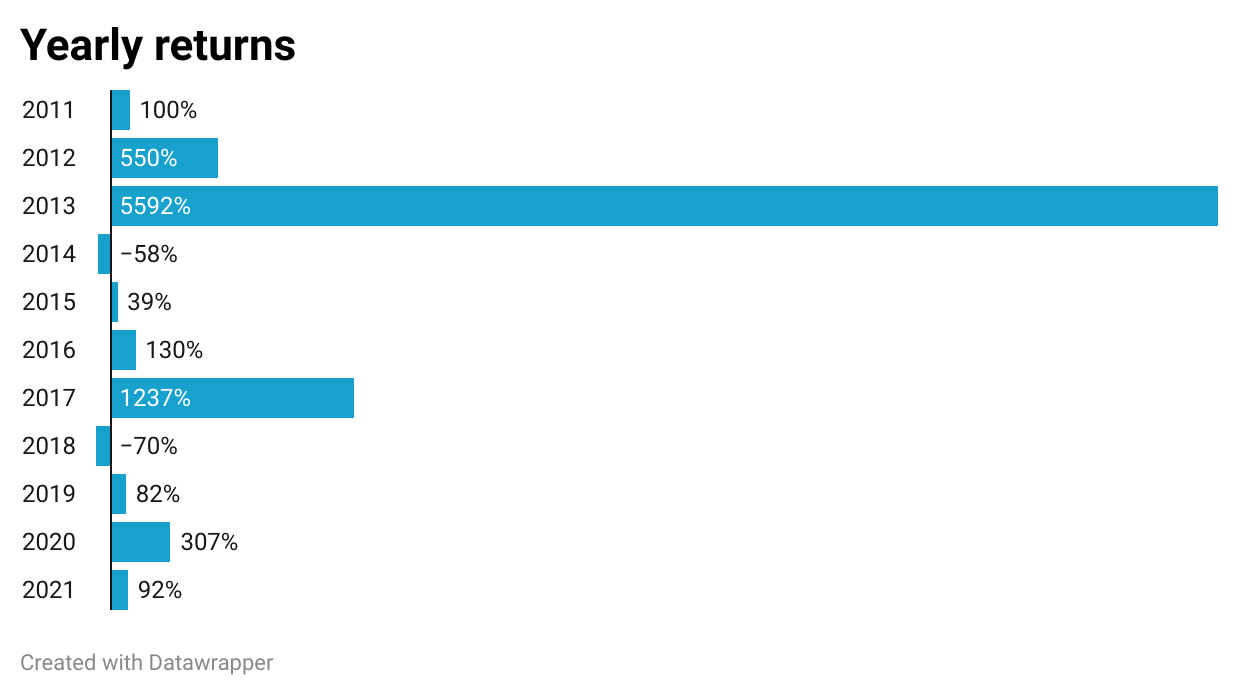 A plot of the interquartile ranges of returns since 2012 shows that 75% of 12-month periods have yielded over 17% for Bitcoin, while the top-performing 25% of periods have produced a whopping 477% return or more. 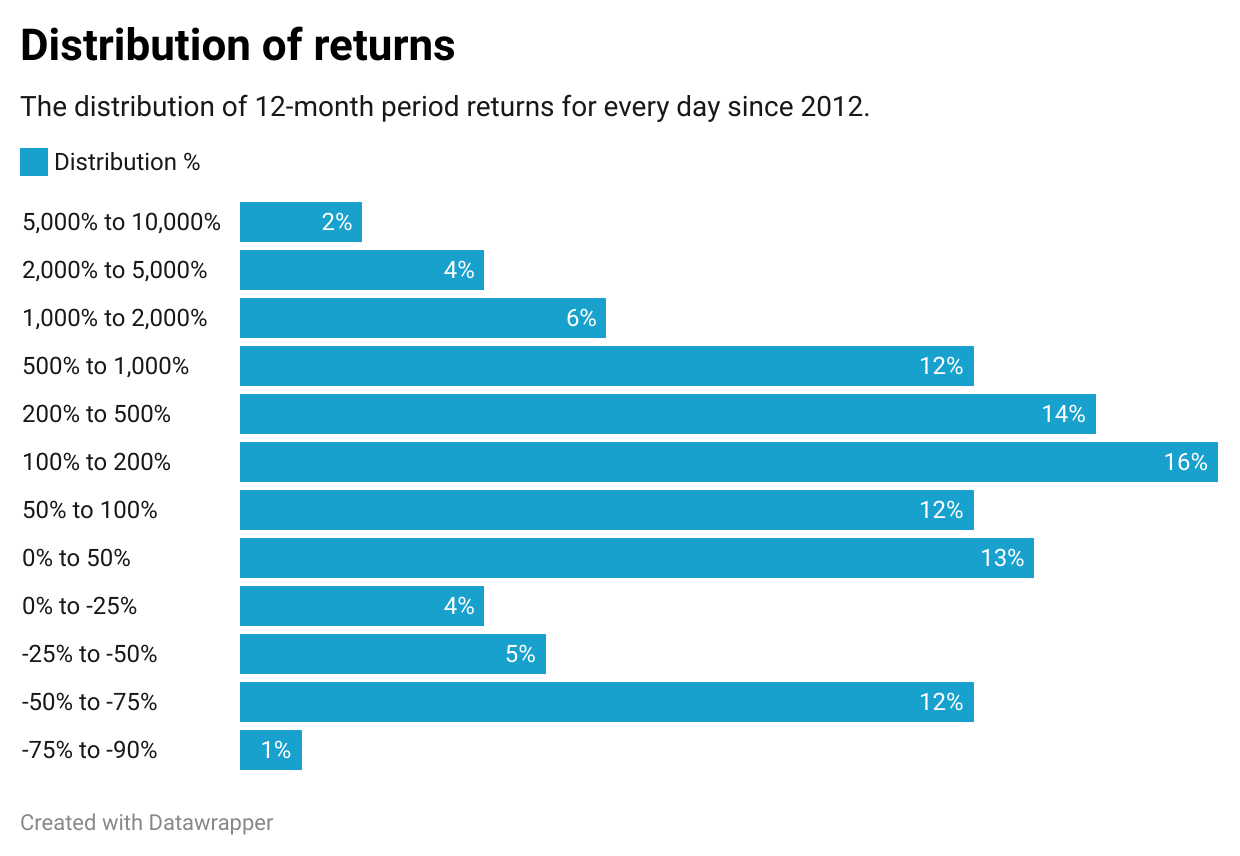 The risk-adjusted return of an asset is likely the single most important performance metric for most investors; however, it doesn't seem to be a priority for the traditionally undercapitalised crypto crowd. They tend to seek absolute returns over risk-adjusted returns because riskier assets essentially offer them leverage. With this said, as long as they are prepared to stomach up to 90% drop over the short run, they can still be rewarded with above-market risk-adjusted returns during many periods. The below chart highlights the swings in the annualised Sharpe ratio of Bitcoin versus the S&P 500. 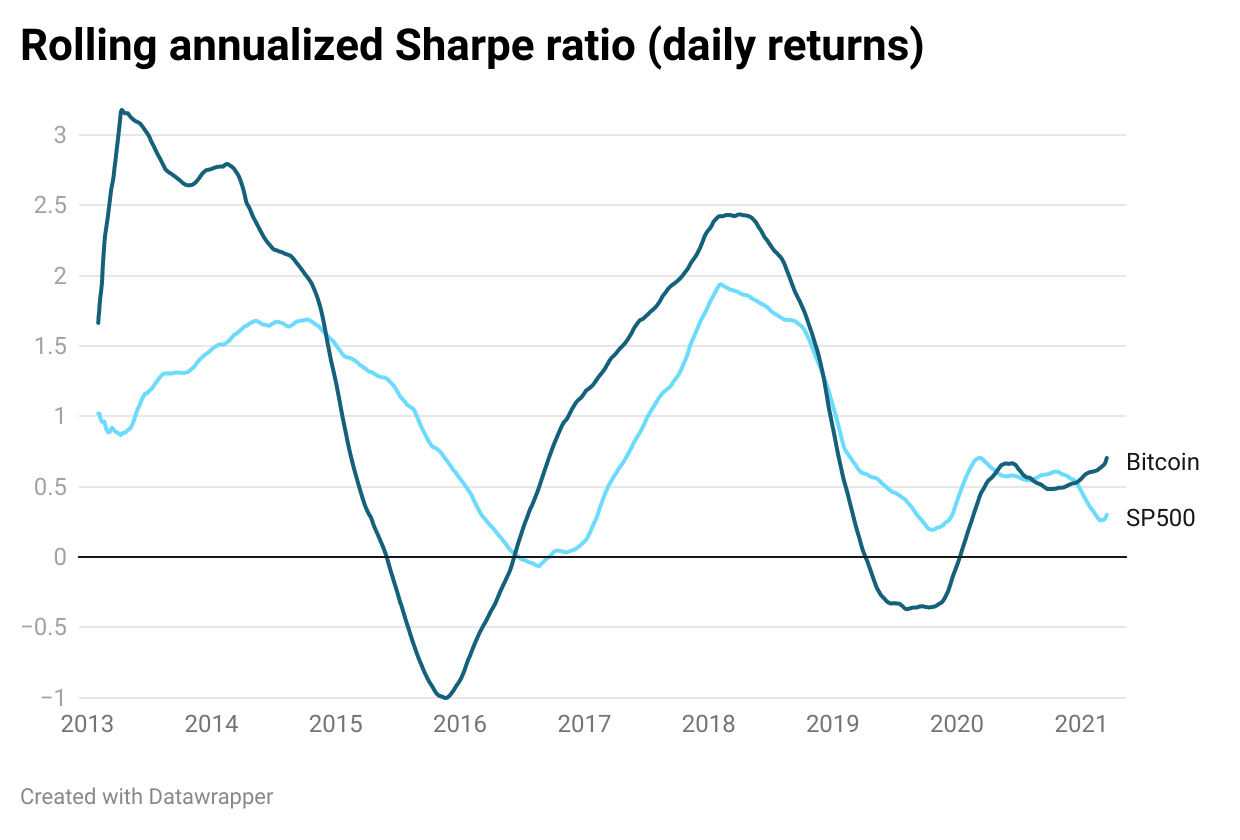 March 2020 saw a spike in the 12-month correlation between Bitcoin and the S&P 500 as both reacted negatively to news of the pandemic. This correlation continued to strengthen as they both began to recover, with it reaching a high of 0.35 in November 2020. The correlation has since begun to turn back down as Bitcoin relentlessly drives higher. 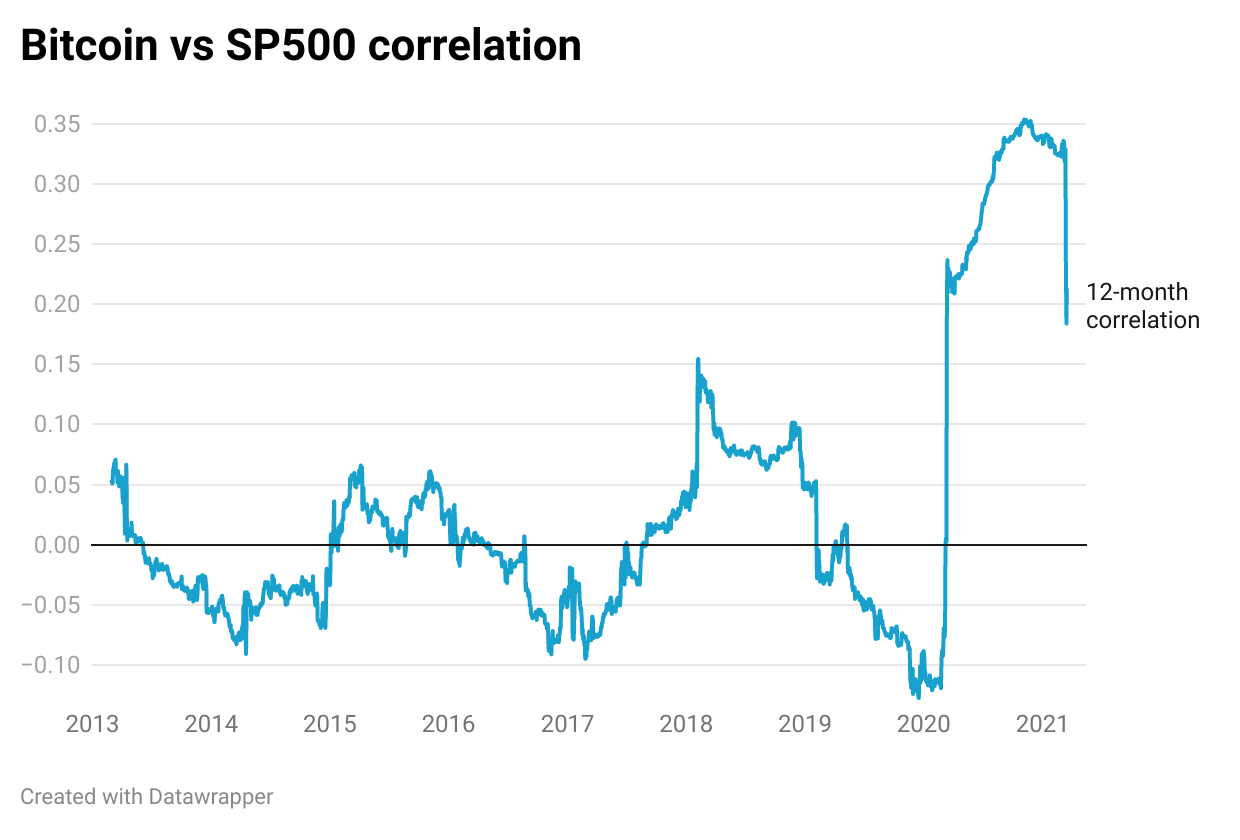 The 12-month rolling volatility of 30-day returns shows that Bitcoin volatility is on the rise once again, despite being appreciably lower than previous peaks in 2014 and 2018. As it stands today, compared with the S&P 500, Bitcoin is approximately four times as volatile. 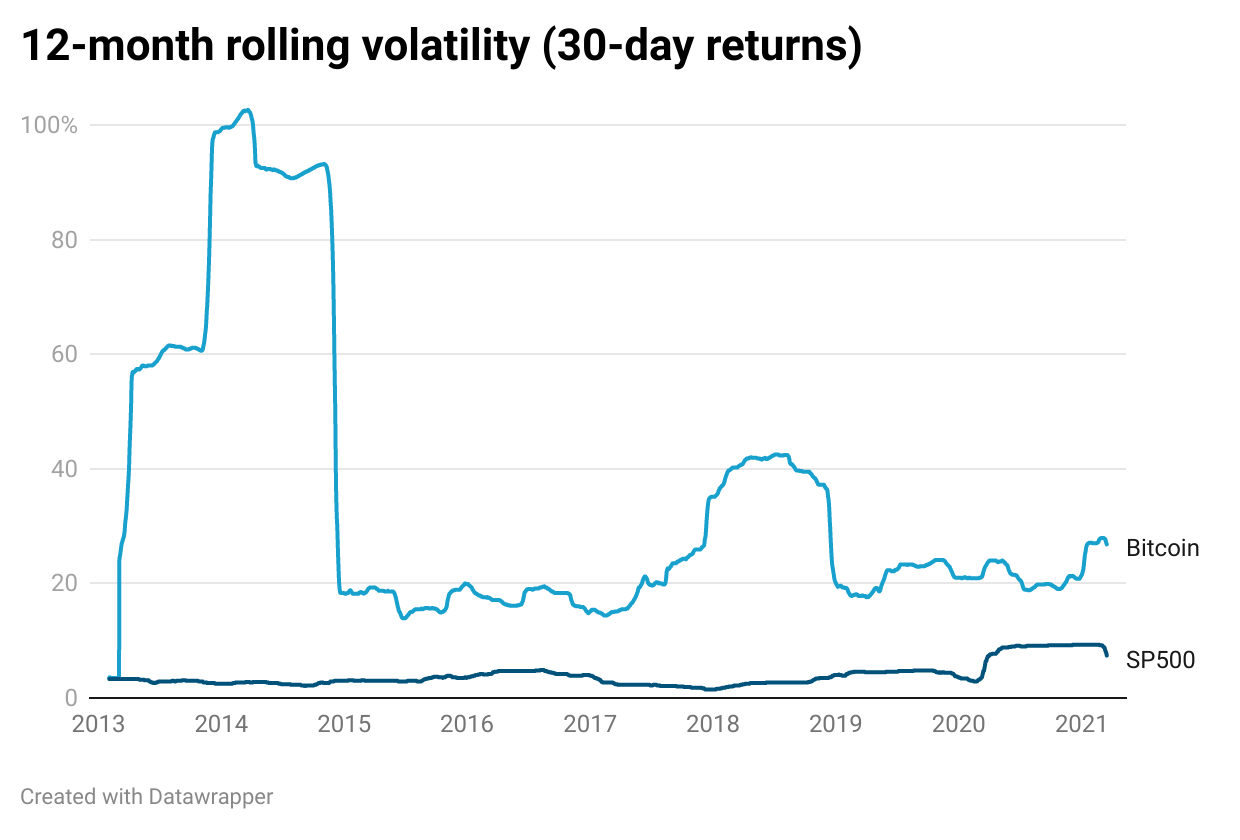 Heavily decentralised markets have a skew towards higher volatility because the liquidity is fragmented across many exchanges. Large market orders on one exchange can rip through the order book at a much faster rate, which in turn triggers arbitragers to adjust the price on other exchanges to the same level – all without having to fight against a centralised single wall of liquidity.

Read my primer on Quantitative Technical Analysis here (complete with a video on my methods and the benefits of combining traditional technical analysis techniques with cutting-edge machine learning).