Fun and games in the Bitcoin boom

The story of James Howells is remarkable. In 2013, the Welsh IT engineer accidentally threw away a hard drive with 7,500 Bitcoins on it. Those Bitcoins are now worth US$286,559,250, and Howells has secured hedge fund backing to lobby the local government to allow him to excavate the city’s landfill to recover the hard drive, in return for which he will donate 25% of the value of the Bitcoins to a local Covid recovery fund.

Halfway around the world in California, Stefan Thomas has a similar problem. He’s forgotten the password to a hard drive with 7,002 Bitcoins on it, and only has two chances left to guess the password before the security software on the hard drive automatically encrypts its content, depriving him of his fortune forever. A security researcher has offered to forensically reverse engineer the hard drives security to order to find a backdoor to recover Thomas’s Bitcoins in return for a 10% share of the proceeds.

Howell and Thomas are not alone. Bitcoin research firm Chainalysis estimates that 20% of all Bitcoins mined have now been lost, with a value of US$141 bn dollars which, for comparison’s sake, is a bit more than the total market cap of Citigroup or all of the Bitcoin mined since 2016. Mining all this lost Bitcoin required a huge amount of energy – roughly the annual electricity consumption of Iran or Indonesia prior to the mining reward being halved in May 2020.

In addition to lost Bitcoin, millions across the developing world have been affected by various Ponzi schemes that utilise, or aim to associate themselves with, cryptocurrencies. CipherTrace estimates that US$4.5bn of cryptocurrency was stolen in 2019, the worst year on record for crypto theft. In the most egregious example, Wotoken, a Chinese multilevel marketing scam, stole more than a billion dollars across five cryptocurrencies in 2018 and 2019. The fact that Bitcoin and the Bitcoin brand are exploited by scammers is not Bitcoin’s fault, but it does serve to highlight the risks involved for the inexperienced when entering the cryptocurrency space. As Thomas, now disillusioned with cryptocurrency, puts it, “This whole idea of being your own bank…The reason we have banks is that we don’t want to deal with all those things that banks do”…like not losing your money to a faulty computer system.

Nevertheless, institutional investors are piling in as never before, both using recent dips in the cryptocurrency to increase exposure and buying their own mining capacity. One can assume that these institutions will have their IT security sorted and will not need to rely on potentially vulnerable crypto exchanges. As Ben Hunt has explained, the real Bitcoin opportunity for Wall Street isn’t price appreciation, but rather the opportunity to create flow products. Bitcoin transactions may be slow and energy intensive, but Wall Street has been able to create flow around housing and other much more illiquid assets in the past.

Bitcoin investors appear to want that flow product. A 2017 survey of US Bitcoin owners found that only 8% had any intention to use their Bitcoin for transactions and the majority would prefer to get their exposure to Bitcoin through a traditional investment vehicle, like a futures contract or an ETF, rather than by holding Bitcoin themselves. As such, it is unsurprising that the majority held their Bitcoin in a single online wallet rather than on their own device, as Howells and Thomas did. A 2020 survey found that Bitcoin investors are still optimistic, with the majority expecting Bitcoin to outperform the dollar, real estate, gold and the US stock market over the next 5-10 years. Nonetheless, most of those surveyed still held less than one-fifth of their assets in cryptocurrency, showing an element of caution despite their bullishness.

All this institutional interest and enthusiasm for Bitcoin price appreciation means that Bitcoin, and perhaps other cryptocurrencies, are likely to have a place in the financial system now and into the future, but that position will be as an asset – a store of value that is actively traded – not the means of exchange that many originally intended Bitcoin to be.

But, as I have argued before, digital payments still do need digital currencies, and if they are designed correctly, the best solutions could be central bank digital currencies (CBDCs). The CBDC space continues to gain traction in 2021. Most notably, the government of Ukraine has recently signed a memorandum of understanding with the Stellar Development Foundation (SDF), the motive focus behind the Stellar network and the lumen (XLM) cryptocurrency and various anchored stable coins that operate on the Stellar network. Ukraine does not plan to operate its cryptocurrency directly on the Stellar network – SDF will provide technical expertise to help the government develop the infrastructure for a virtual asset market, implement regulated circulation of stablecoins in Ukraine and develop a CBDC. 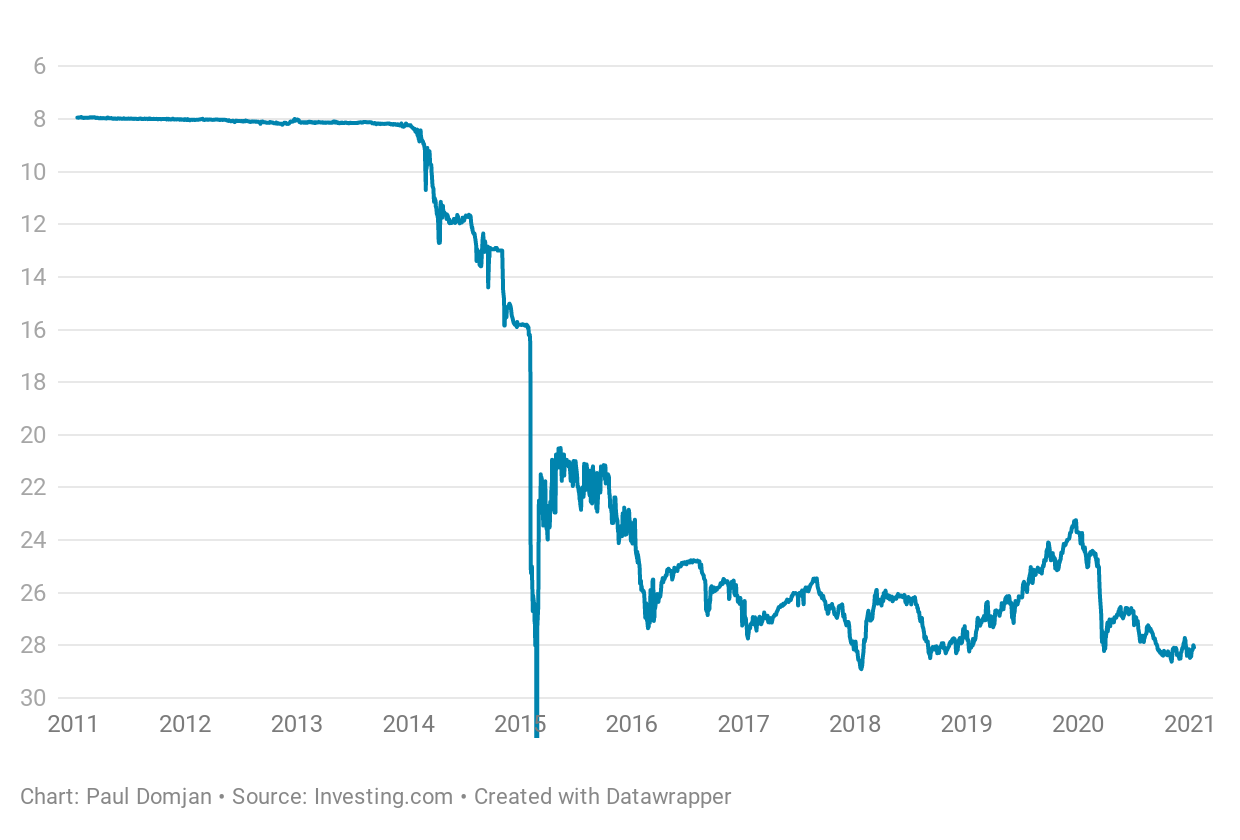 Robust, blockchain-based CBDC is a good choice for countries like Ukraine, where the hryvnia has lost nearly three-quarters of its value against the dollar in the past decade. I’ve previously argued that a central bank might cede control of its CBDC, and develop a widely circulating, cryptographic, blockchain-based digital currency, for one of two reasons: to unseat the dominance of the US dollar or to avoid Big Tech dominance of digital currency. The example of Ukraine shows a third reason: to enhance monetary policy credibility. While there is always an element of moral hazard in central banking, something of which emerging market investors are acutely aware, blockchain-based CBDC can bake limits into the design of the cryptocurrency. Developed countries may not be willing to accept immutable constraints on their monetary choices, whereas such constraints could help to strengthen the credibility of emerging market currencies.

The advantages of blockchain-based CBDC extend beyond emerging markets. The European Central Bank’s digital euro consultation, which generated a record number of responses, found that Europeans most value privacy, security and pan-European reach in a digital euro. A central ledger operated by the ECB would provide pan-European reach, but it would create a single point of failure for both privacy and security. On the other hand, a widely circulating digital euro that is a cryptographic unit of value with a proper distributed ledger architecture would automatically have pan-European, indeed global, reach, while allowing privacy to be designed in and removing any single point of failure from a security perspective. If the ECB wants to deliver a digital euro that meets the needs of its citizens, it may need to swallow hard and adopt blockchain-based CBDC.

Figure 2: The most requested features in the ECB's digital euro consultation 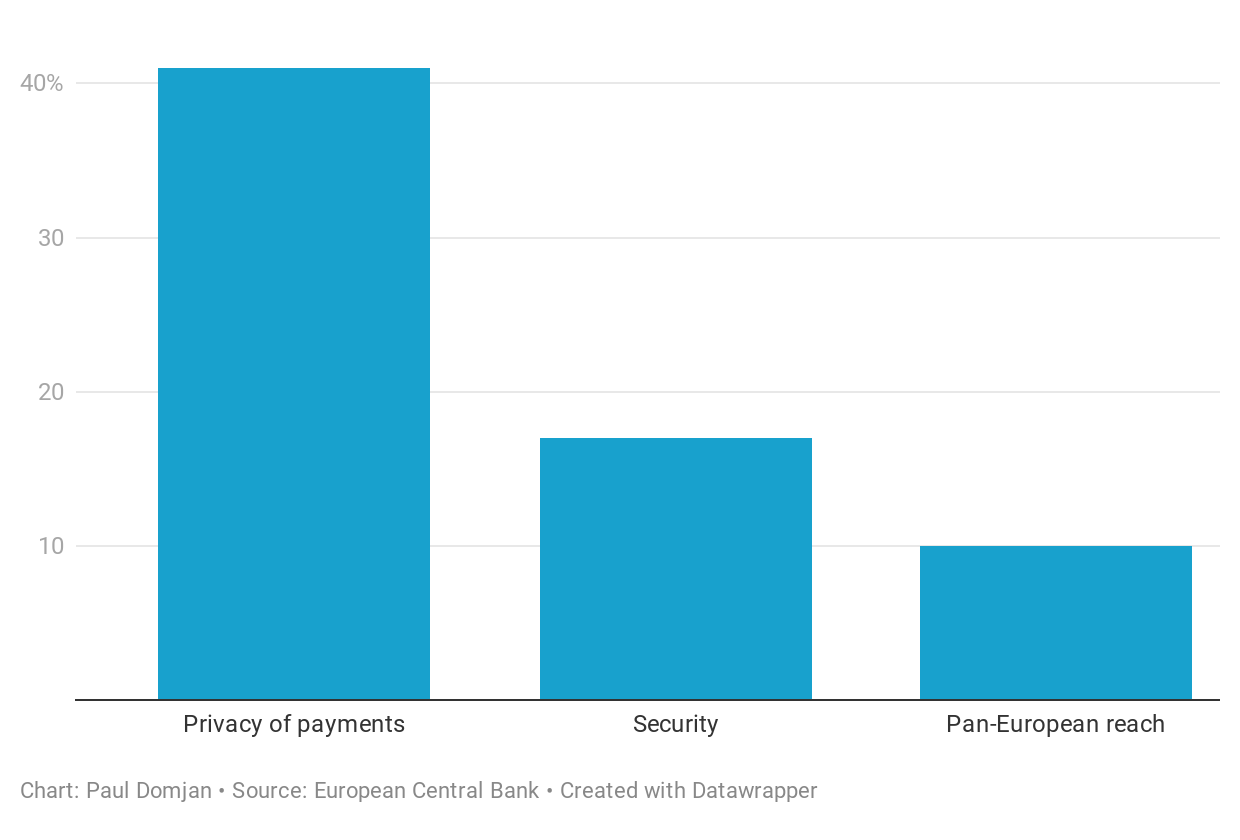 What does this mean for investors?

At a macro level, investors will need to prepare for the potential impact of CBDC on the banking sector. Once currency can be held securely and digitally, many people may prefer holding CBDC to depositing cash in a bank. Although that would threaten the credit-intermediation function of banks, it would force them to compete to offer greater value to customers, while also opening the opportunity for a wide range of credit-based investment and peer-to-peer lending products that could disintermediate banks from credit intermediation.

At the single company level, although SDF is a non-profit foundation, there are a number of fintechs that are well-positioned to provide similar support to other central banks looking to develop blockchain-based CBDCs. R3, which has grown from a consortium of banks to an enterprise software firm with both open-source and enterprise versions of its Corda blockchain platform, is a notable example.

My new book on the future role of blockchain technology in emerging markets, co-authored with Gavin Serkin, Brandon Thomas and John Toshack, will be published by Palgrave Macmillan in April 2021.