Recent regulatory pronouncements against the tech sector in China have hit investor sentiment in that market, but are consistent with a broader global dialogue, as corporates, consumers and policymakers look to establish the ground rules for engagement at a time of rapid change. We present below some of the main areas of potential scrutiny and highlight key implications for investors.

Market share restrictions. Many tech company business models are built on exploiting powerful network effects, resulting in a strong winner-takes-all dynamic. Governments and regulators are wary of monopolies, particularly when they do not own them. In allowing WhatsApp to operate a payments service in India, the regulator has capped individual operators’ market shares at 30%. Separately, in recent years, the EU has slapped over US$9bn of fines on Google for alleged abuses of its dominant market position concerning its price-comparison shopping service, its Android mobile operating system and online advertising. Earlier this week, the EU also accused Amazon of abusing its market dominance.

Price caps. Policymakers and consumers worry that firms will exploit their market dominance to lift prices. In Brazil, WhatsApp was planning to charge merchants a 4% transaction fee for using its payments platform. However, the regulator withdrew its consent, citing its preference for an open and low-cost payments platform, such as PIX, which it is helping to develop.

Clampdown on predatory pricing. For businesses with strong network effects, loss-leader strategies to build scale can still be sharply NPV-positive. However, this can result in industry winners simply being those with the deepest pockets, not the companies with the best proposition. In India, Paytm’s losses are broadly the same size as its revenues. In China, Alibaba is investing heavily in cloud-computing – currently, this activity is generating huge losses. For regulators, the difficulty comes in determining when low pricing is needed to grow the market, and when it is designed to drive out competitors.

Closer scrutiny of tax returns. For many decades, multinational corporations considered tax efficiency when making key decisions, such as where to operate a factory or logistics centre. For tech companies selling intangible products and services, the opportunities for tax optimisation are much greater. Some companies have also faced a consumer backlash, for the same reason. For example, Amazon, which paid UK tax of just US$18.5mn in 2019, despite generating sales of US$17.7bn in the country. Indeed, digital taxes are likely to be an increasing source of friction between governments; disagreements between the US and France on this topic contributed to the former putting 25% tariffs on US$1.3bn of French goods.

Protectionism. Politicians like to be seen to be protecting domestic industries. One reason WhatsApp has struggled to launch its payments platform in key emerging markets like Brazil, India and Indonesia has been the successful lobbying from vested domestic interests. Once the industry moves into profit, Vietnam is likely to tighten foreign ownership restrictions on digital payments companies.

Data privacy and cybersecurity. Tech companies can collect huge amounts of data relating to their customers. While some jurisdictions have strict protections in place (such as the EU’s General Data Protection Regulation framework), others are laxer. US President Trump’s campaign against TikTok rested on the risk that US consumer data would fall into the hands of the Chinese government, where TikTok’s parent, ByteDance, is based. In Indonesia, financial comparison platform Cermati was a victim of a cyber attack that compromised the data of 2.1mn individuals; we expect this breach to expedite the introduction of a personal data protection law, which has been under consideration since 2014. In Pakistan, enhanced KYC procedures, such as biometric verification, could limit the ability of digital new entrants (such as Sadapay) to capture new customers.

Restrictions on alliances. Many technology firms make extensive use of alliances, to access best-of-breed technology, to expand into new product segments and geographies, and to achieve regulatory efficiency. For example, Ant Group historically has acted as a distribution platform for regulated businesses such as insurers, banks and investment firms. For regulators and consumers, these alliances make it difficult to answer a key question: which entity will take responsibility if something goes wrong? Ant Group’s IPO was recently pulled after regulators questioned how customer data was being shared with its partners, and as it demanded the firm hold more loans on its own balance sheet.

Operational risk. Key daily activities are increasingly falling within the realms of technology firms. This can cause significant problems when a flaw or weakness is exposed. Fraudulent documents at Wirecard allowed the firm to conceal a US$2.1bn hole in its balance sheet from its auditors, potentially exposing unwitting consumers and businesses to financial losses or failed deliveries.

Financial risk. Many fintech business models deliberately skirt outside regulatory boundaries to enable them to adopt investor-friendly capital-lite balance sheet structures. However, problems can arise when these businesses encounter unexpected losses, potentially to the detriment of the end-consumer. Lending fintech models appear to be coming under increasing scrutiny. In China, a 30% risk-sharing floor for online lenders is being considered, which could have profound implications for Ant Group. In India, the Reserve Bank of India last year passed legislation limiting the exposure lenders can take to P2P platforms

Private asset versus public good. By performing crucial services for their clients, some tech firms are now effectively taking on public service responsibilities. For example, many governments have sought to reduce Covid-19 transmission by promoting electronic payments over cash. In both Bangladesh and Kenya, digital payments firms such as bKash and MPesa have been asked to provide some of their payments services free of charge.

In recent years, investors have been willing to support a decoupling of large tech firm valuations versus the rest of the market, driven by expectations of rising profitability, market dominance and successful expansion into new products and geographies. Globally, tech firms now trade on price/sales multiples more than 2.5x that of the broader market. Growth stocks trade at more than 3.0x the price/sales ratio of value stocks. 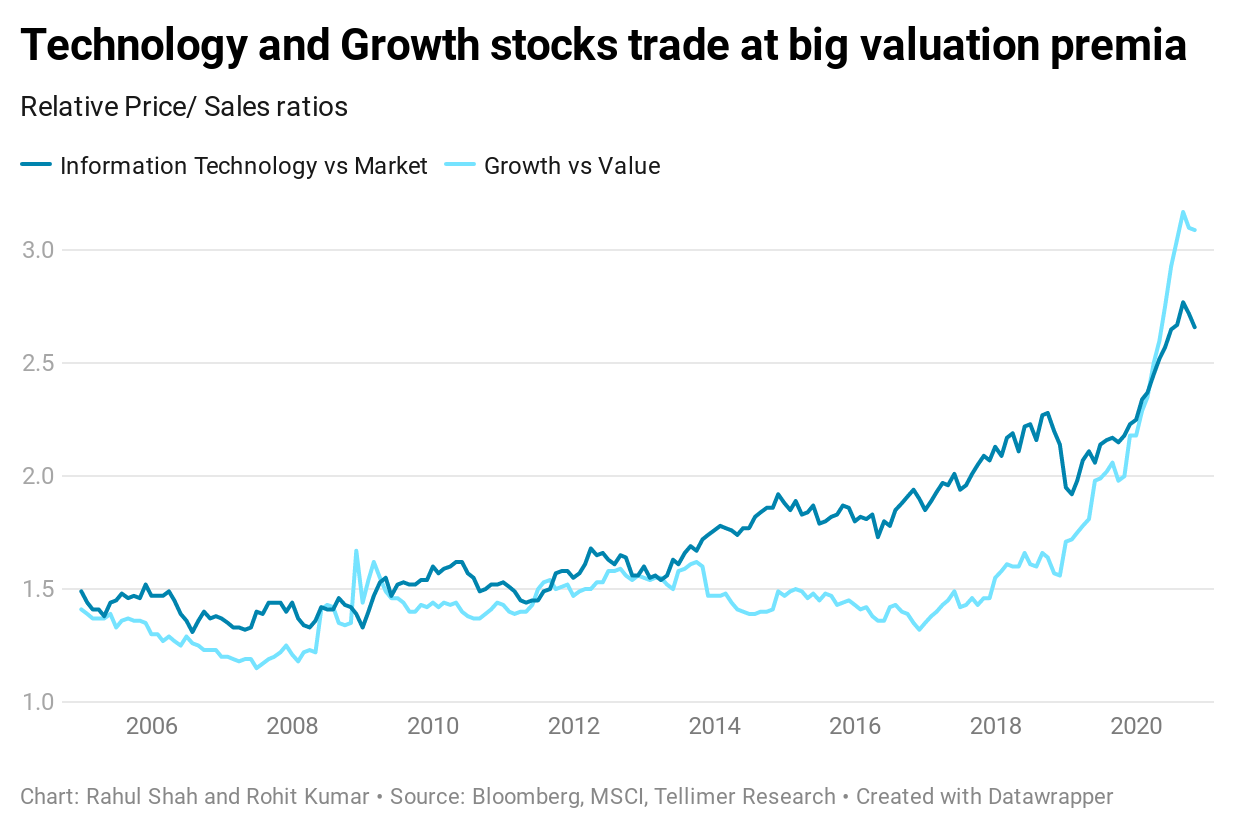 Increased regulatory oversight may drive a scaling-back of the big tech valuation premium, a process that seems to have already started. Could the 13-year bear market in value versus growth investing finally be coming to an end? 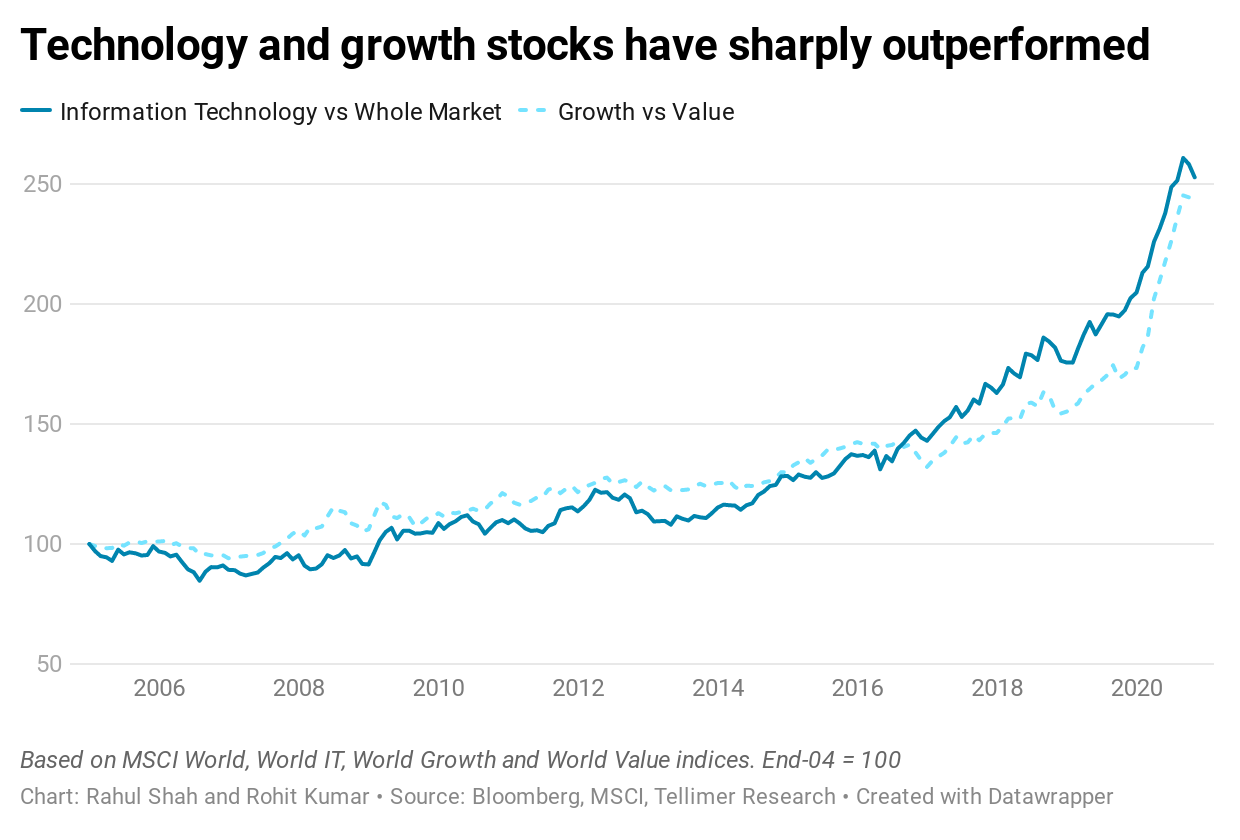