There appears to be very little difference between Biden, Trump and the US Congress on the description of China as a long-term geopolitical rival, the view of Iran, North Korea and Russia as security threats, the sanctity of the security of Israel, and the maintenance of US global military supremacy.

However, on the basis of his public comments, eg in the March-April 2020 edition of Foreign Affairs, from which we highlight quotes below, we identify four clear differences between Biden and Trump on foreign policy that would materially affect risks associated with emerging markets:

"The United States does need to get tough with China. If China has its way, it will keep robbing the United States and American companies of their technology and intellectual property. It will also keep using subsidies to give its state-owned enterprises an unfair advantage – and a leg up on dominating the technologies and industries of the future."

1) Multilateralism – Although Biden's assessment of potential threats is similar to Trump's, the method for his proffered response in every case is based on multilateralism, building the broadest coalition of allies and using existing international institutions, as opposed to Trump's unilateralism. This approach likely leads to more predictability in US foreign policy and more negotiation in advance of those changes. To the degree that investors react most to unpredictable geopolitical news as opposed to bad geopolitical news, this might reduce the perception of risk in emerging markets. The challenge for Biden, or any future president after Trump, is that the credibility of any US signature on a long-term multilateral agreement has been damaged and may take a long time to rebuild.

"On its own, the United States represents about a quarter of global GDP. When we join together with fellow democracies, our strength more than doubles. China can’t afford to ignore more than half the global economy. That gives us substantial leverage to shape the rules of the road on everything from the environment to labor, trade, technology, and transparency, so they continue to reflect democratic interests and values."

"To counter Russian aggression, we must keep the [NATO] alliance’s military capabilities sharp while also expanding its capacity to take on nontraditional threats, such as weaponized corruption, disinformation, and cyber theft."

2) Trade – Biden has made clear his opposition to the US-China trade war and the ultimately self-defeating nature of tariff escalations. The elimination of unilateral tariffs on China would clearly benefit trade volumes across the China-connected Asian supply chain (eg Malaysia, the Philippines, Vietnam). Furthermore, the multilateral response he espouses includes re-engagement in the Trans-Pacific Partnership (TPP), which should be positive, albeit in the very long term, for likes of Chile, Malaysia, Mexico, Peru, Singapore and Vietnam (less so for those outside TPP, such as Bangladesh, Egypt, India and Pakistan).

"More than 95 percent of the world’s population lives beyond our borders—we want to tap those markets. We need to be able to build the very best in the United States and sell the very best around the world. That means taking down trade barriers that penalize Americans and resisting a dangerous global slide toward protectionism."

3) Iran – Biden would attempt to resuscitate the Iran nuclear deal framework. Our view is that there are limits to hot military action with Iran (ie a full-blown war is unlikely under any US administration) and that, if Iran is bound by the nuclear deal and the potential to re-engage economically with the global economy, then the security risks of the broader Middle East region substantially reduce. The chastening experience of Saudi in both its Yemen war and in the precision attacks on Aramco assets and the destruction of the Iranian economy wrought by another bout of sanctions make both more likely to play their part in lowering those tensions under a new deal.

"Tehran must return to strict compliance with the deal. If it does so, I would rejoin the agreement and use our renewed commitment to diplomacy to work with our allies to strengthen and extend it, while more effectively pushing back against Iran’s other destabilizing activities."

4) Climate – The Covid-19 crisis has laid bare the consequences of a lack of global coordination. In some respects, the climate crisis is another iteration of this. Amid the international recriminations currently underway as to how the virus originated and spread, it appears naive to expect a path to global coordination re-opening – and that implies higher long-term risk for all assets. Yet the growth of professional investment mandates that filter out the most egregious polluters suggests that there is consumer demand to slow down climate change. In that sense, US foreign policy that supports this agenda should be positive for emerging (and developed) markets.

"I will rejoin the Paris climate agreement on day one of a Biden administration and then convene a summit of the world’s major carbon emitters, rallying nations to raise their ambitions and push progress further and faster."

US voters currently care almost 30 times more about domestic issues (the economy, jobs, health care) than foreign policy ones (overseas conflicts, terrorism). Perhaps, we should neither expect the two candidates to focus much on foreign policy nor make much of a show of differentiating their foreign policies during the election campaign.

Furthermore, the effectiveness of congressional checks on the president's foreign policy has proven quite limited unless there is divided government (ie control of the executive and legislative branches is split between the parties). And, even when there is divided government, presidents circumvent this, at least for the duration of their term, via the use of executive orders.

However, what Trump has done so effectively, dating back to his "America First" 2016 campaign, is to link aspects of foreign policy with the domestic economic agenda – linking his trade tariffs on China, exit from TPP and renegotiation of NAFTA as part of leveling the playing field for US-based businesses – and he is attempting to do the same with blaming China for the spread of Covid-19 and the resultant economic sudden-stop.

In addition to this, Trump has made profound changes to US foreign policy that are not so easily linked back to a domestic economic agenda: eg withdrawal from the Iran nuclear deal, withdrawal from the Paris Climate Accord, less support for multilateral organisations (including NATO), challenging military allies (such as NATO or South Korea), support for hardliners in Israel. Not all of these policies can be described as deliberate distractions from domestic issues, such as impeachment.

Emerging markets care a lot about US foreign policy

Ultimately, for emerging markets, the trajectory of US economic growth, treasury yields and the US dollar are more important than US foreign policy. But US foreign policy, and particularly its extension into trade and sanctions policy, can still be a very powerful driver of asset prices in EM (putting to one side the additional volatility in markets introduced by Trump's twitter account).

Examples under Trump include China tariffs (dampening trade volumes for the connected Asia ex-Japan supply chain but increasing capex into the parts of that supply chain with lower costs and tariffs, eg Vietnam), the Iran deal (raising the perception of risk in the GCC and Iraq) and Saudi (both initially emboldening Saudi and the UAE to embargo Qatar, and later, resisting Congressional pressure on Saudi Crown Prince Muhammad bin Salman after the Khashoggi Affair or Turkish President Erdogan after the purchase of Russian arms).

Going forward, investors in emerging markets are going to be exposed to a number of areas where the direction of US foreign policy is central to the investment debate, eg:

Biden would face the same external geopolitical constraints as Trump

Biden would face the same constraints as Trump that limit his room for manoeuvre in foreign policy. 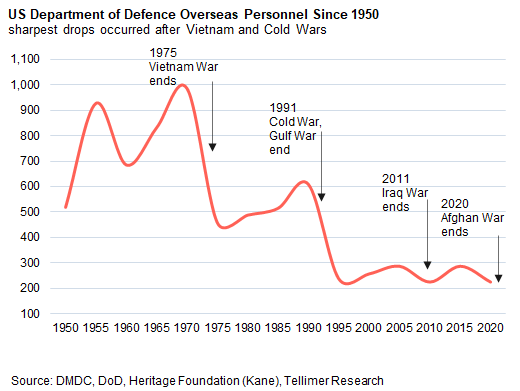 Although Biden and his Democrat support base may much more closely associate with the style and substance of Obama foreign policy than that of Trump, the world has changed sufficiently to mean that the US cannot simply revert to the Obama-era should Biden win.

Since Obama won office in 2008, China's share of the global economy has more than doubled (without it becoming more democratic), Russian military intervention has extended beyond its neighbours, the withdrawal of US forces from Afghanistan and Iran is closer to completion, large parts of the Middle East and North Africa have gone through a false political 'Spring', and new spheres of geopolitical competition have opened up (eg the control of mobile technology standards, the cross-border regulation of dominant technology companies, territorial control in the South China Sea and in the Arctic, influence and control in multilateral organisations like the IMF, UN, WB, WHO and WTO).

Since the election of Trump in 2016, the "International Liberal Order" (a label that misleads in every word in referring to the post-USSR Cold War multilateral framework for international relations) has been undermined by the country that was one of its chief architects: the unilateral withdrawal of the US from the Iran nuclear deal, the TPP and the Paris climate accord are all examples of this. Post-Trump, countries have cause to doubt the US commitment to any long-term multilateral agreement (over many decades prior to Trump, there are examples of the US changing its commitment to bilateral partners, eg the Shah of Iran after the 1973 oil crises, the Pakistan Army after the fall of the USSR in 1991 and Mubarak in Egypt in 2011 during the Arab Spring).

Since the advent of Covid-19 and the risk of authoritarian abuse of technology and emergency powers, the increases in inequality within and between nation states and awareness of the consequences (if not yet the remedies) of the failure of international coordination have increased. 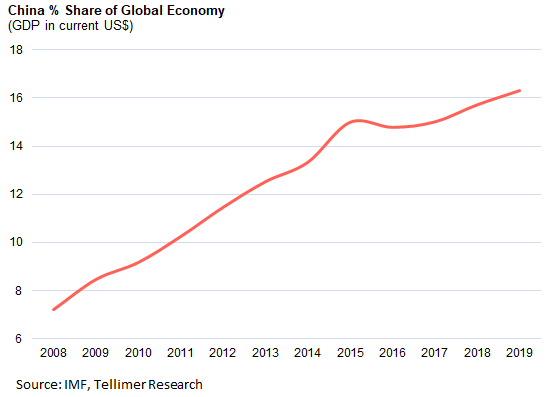 There is still a long way to go and Trump's job approval ratings among registered votes are not very different from a year ago. But an election loss for incumbent President Trump on 3 November no longer looks as remote a possibility as it did during the farce of the Democrat caucus in Iowa in early February and before Covid-19. And, for some, the administration's poor policy response caused over 80,000 deaths and over 30mn job losses.

After the US withdrawal from TPP in January 2017, the remaining 11 countries negotiated the Comprehensive and Progressive Agreement for TPP (CPTPP, also known as TPP-11), which became effective at the end of 2018 once it was ratified by six of its signatories. The TPP-11 are Australia, Brunei, Canada, Chile, Japan, Malaysia, Mexico, New Zealand, Peru, Singapore and Vietnam. The US would likely require a lengthy negotiation to join TPP (because the agreement was changed after the US withdrawal, changing or suspending 22 provisions, eg on copyright term length, pharmaceutical intellectual property, and technology protection, successfully negotiated under Obama) and a single existing member can veto its admission.

EM Wars: The changing art and risk of war in Emerging and Frontier markets, 6 March 2020

'Westlessness': What it means for investors in EM and FM, 17 February 2020

Trump impeachment or election loss: what would it mean for emerging markets?, 14 October 2019