Environmentalists and ESG investors now feel more confident about the world reaching net-zero emissions by 2050. Joe Biden's victory in the US Presidential election not only means that the US will re-join the Paris Agreement, the country's ambitious target to reach 100% clean energy by 2035 (currently c40%) will push other countries, especially the high emitters such as China and India, to start thinking on their feet. Clean energy stocks have nearly doubled since 30 June 2020 but this rally as well as some of the priorities set by Biden's team could be stymied should the Republicans retain their majority in the Senate.

The 15-year target also sounds ambitious when compared with the 20-year plans announced by Austria and Sweden which are much smaller in size and way ahead in the renewable energy race.

Biden in the driving seat is positive for more than just solar PV and wind turbine producers, provided that the US now has policy certainty on climate change. We believe that global automakers equally stand to benefit from Biden's victory.. 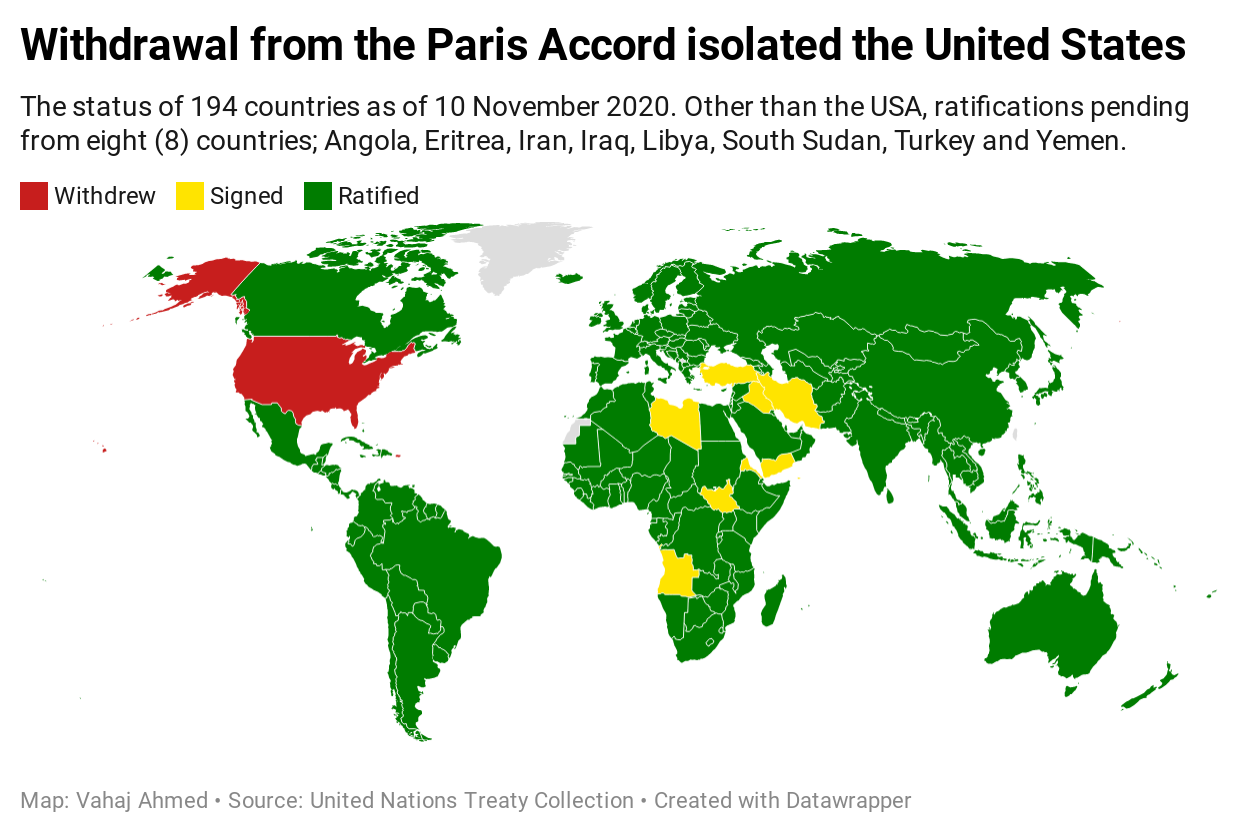 Re-joining the Paris Agreement is easy, delivering on the targets (without a Senate majority) won't be...

Coinciding with election day, the US became the first and only country to withdraw from the Paris Agreement on climate change on 4 Nov 2020. Thankfully, President-elect Biden has promised to re-join the accord on 20 Jan 2021, at which time the US will have to submit a new emissions target. However, Biden's ability to deliver on the targets as well as to push climate action globally depends on the Democrats controlling the Senate. There's no conclusive answer at the time of writing.

Under Biden's command, the Environmental Protection Agency (EPA) could only manage to reduce the country's emissions by c30% by 2030. However, c50% lower emissions (or c80% by 2050) would require laws passed by Congress.

We see a silver-lining in the ballot initiative from Nevada, which has the best solar energy potential in the US. On 3 Nov 2020, voters once again approved the constitutional amendment which requires utilities to acquire at least 50% (previously 25%) of their electricity from renewable sources by 2030. In 2017, c86% of the energy consumed by Nevada came from other states. Therefore, to meet the 50% renewable energy initiative (which is now effective), this relatively smaller state with just over 3mn population (and less than 1% of the country's GDP) could influence other states to join the renewable energy transformation.

...which is reflected in the post-election performance of renewable energy stocks

The leading clean energy stocks nearly doubled (since Jun 2020) in the run-up to the US elections. However, earlier gains have reduced in the last two trading sessions on the likelihood of a Republican-controlled Senate. The top three solar PV producers in the US have dropped 2% on average versus the MSCI US Index which gained 5%. On the other hand, wind turbine producers (mostly non-US) have gained 3%. 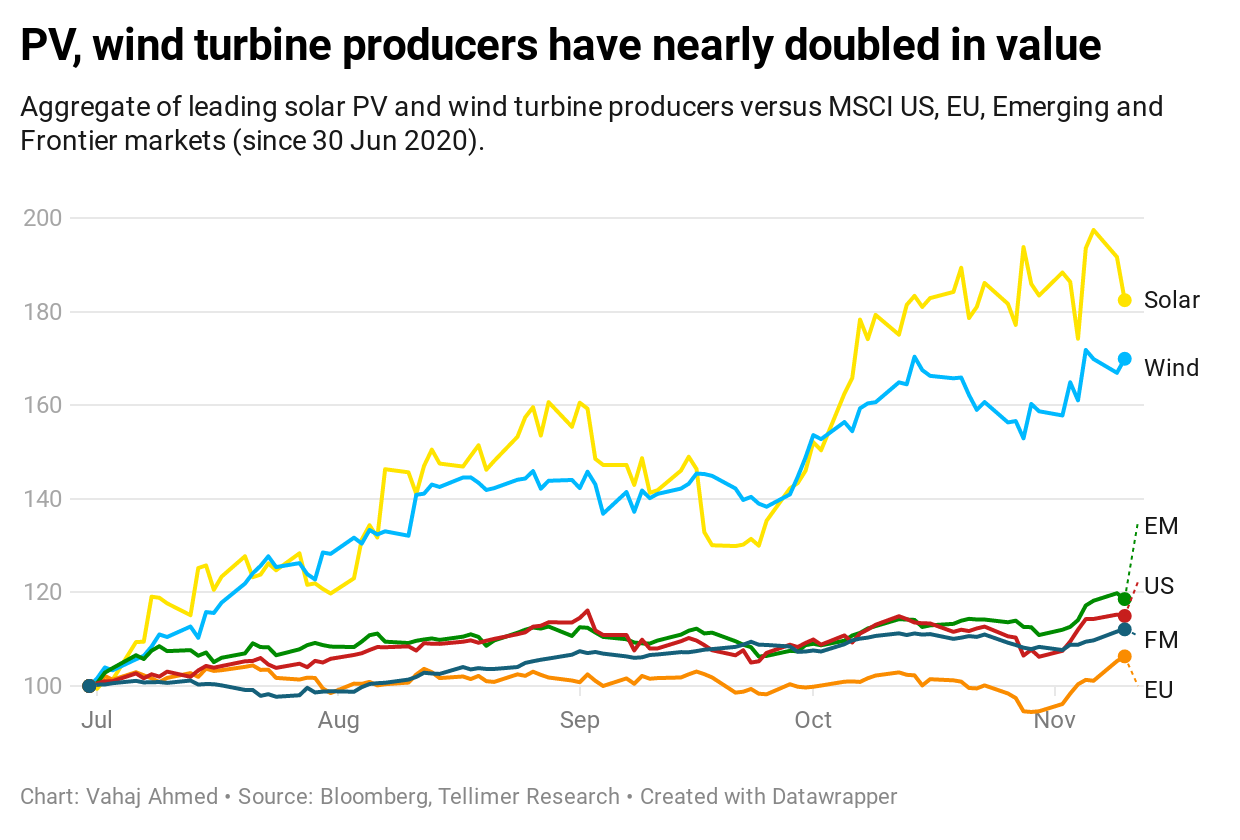 We see a lot of value in automakers, which should benefit from the incentives Biden plans to offer in order to encourage the trading-in of inefficient vehicles for electric vehicles (EVs) made in the US. Moreover, the president-elect has also announced plans to replace all government fleet with EVs. This is positive for the automakers, which does not seem to have been priced in except for Tesla which has increased 5x in value in the past 12 months. Excluding Tesla's abnormal performance, the leading EV manufacturers have gained only 1% and now trade at TTM P/BV of 0.8x; 27% lower than their 5-year median of 1.1x. 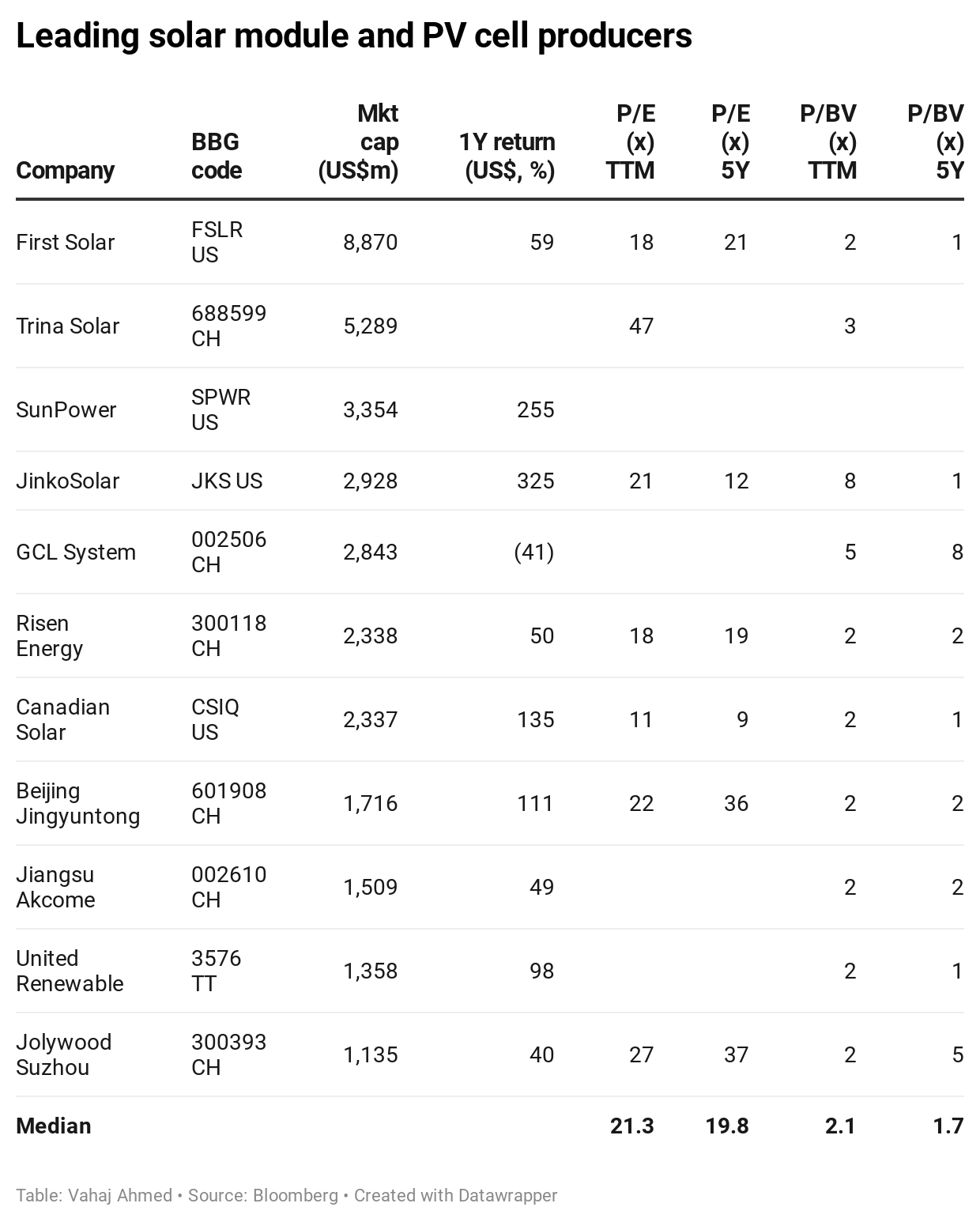 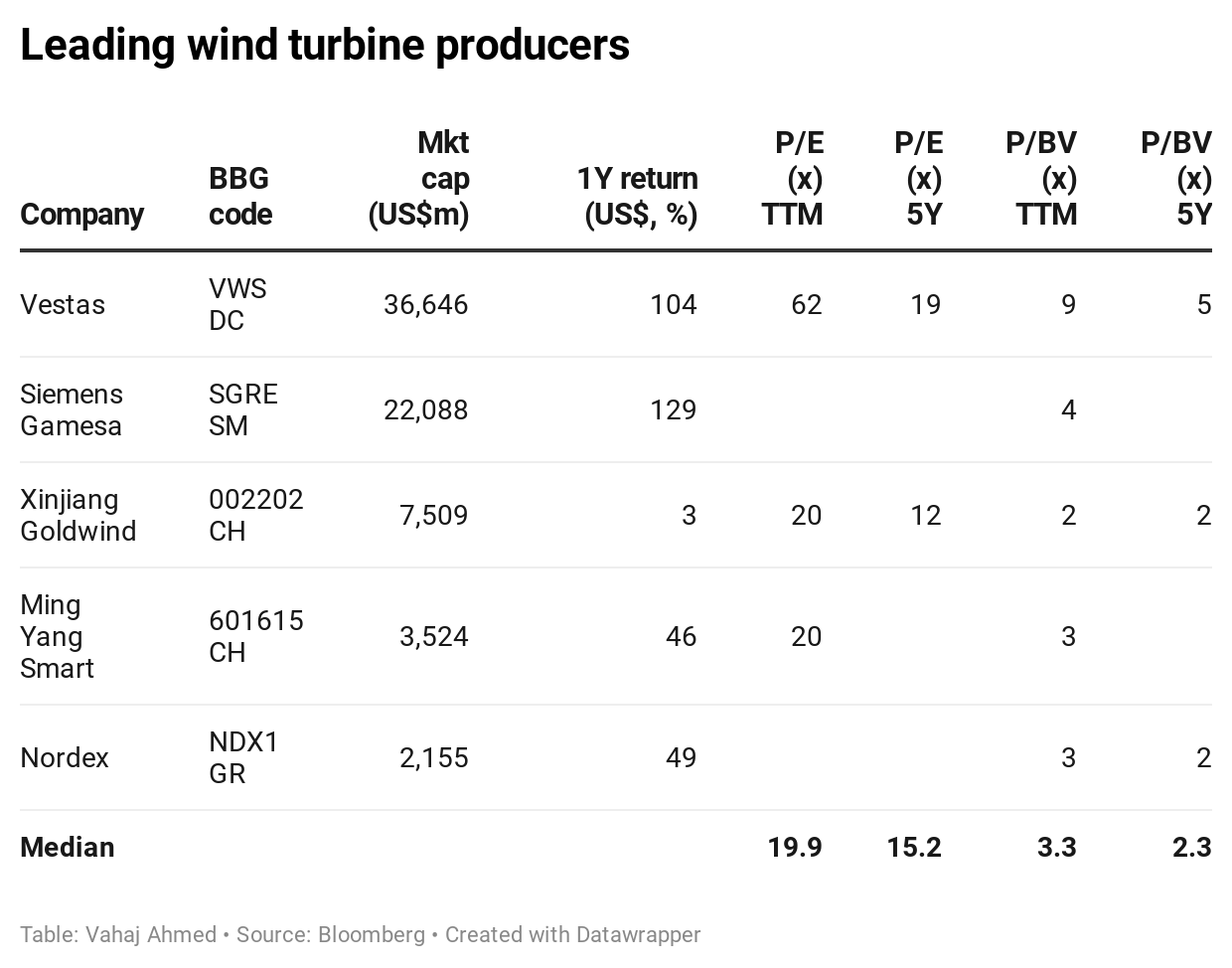 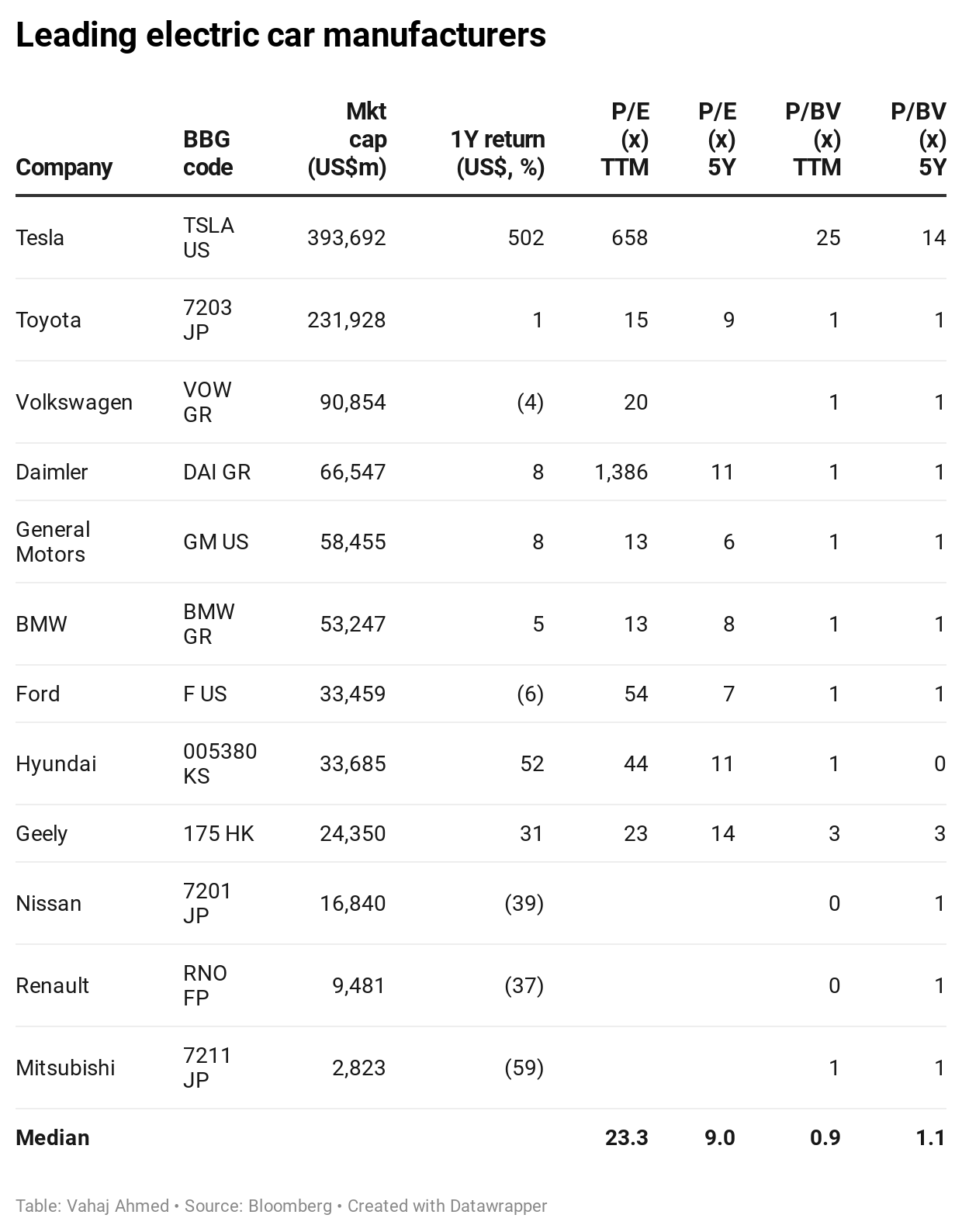