In June 2021, newly elected US President Joe Biden took his first overseas trip, which included an in-person meeting with President Putin of Russia. The pair met with their foreign ministers, Anthony Blinken and Sergey Lavrov, in Geneva, in what was supposed to be two meetings; the first, in a small group with interpreters, and a second longer – less confidential – meeting with more officials discussing a longer agenda. Biden used the more discreet of the two meetings as an opportunity to ask Putin to stop cyber-attacks on the US, and provide a lecture on the importance of human rights, while Putin used it as an opportunity to size up Biden’s personality and resolve.

As far as anyone can tell from outside the room, the two presidents quickly ran out of things to talk about. To both Biden’s own officials and the Russian delegation, it was painfully clear that Biden’s rather indistinct approach represented a significant shift in the conduct of US foreign policy. It was certainly less robust than that of the prior administration, which, for all the unhelpful eccentricities of former President Trump, was otherwise remarkably coherent.

The foreign policy issue that Biden was very robust about during his election campaign in 2019 was Saudi Arabia. Biden said it deserved to be made an international “pariah” as a result of its involvement in the murder of Saudi journalist, Jamal Khashoggi.

Under a Biden-Harris administration, we will reassess our relationship with the Kingdom, end US support for Saudi Arabia’s war in Yemen, and make sure America does not check its values at the door to sell arms or buy oil.

In a policy volte face, Biden has just visited Saudi Arabia and met its ruler, Crown Prince Mohammed Bin Salman (MBS) with a jovial fist bump, having previously blamed MBS for the Khashoggi murder. In the period since Biden’s original rhetoric, the price of oil has nearly tripled, Russia has invaded Ukraine and put its nuclear weapons on alert, the deal to prevent Iran developing nuclear weapons of its own that was torn up by the Trump administration is no nearer to being rehabilitated, relations with China remain fraught, and the US dollar and inflation are rising at their fastest rates in a generation. 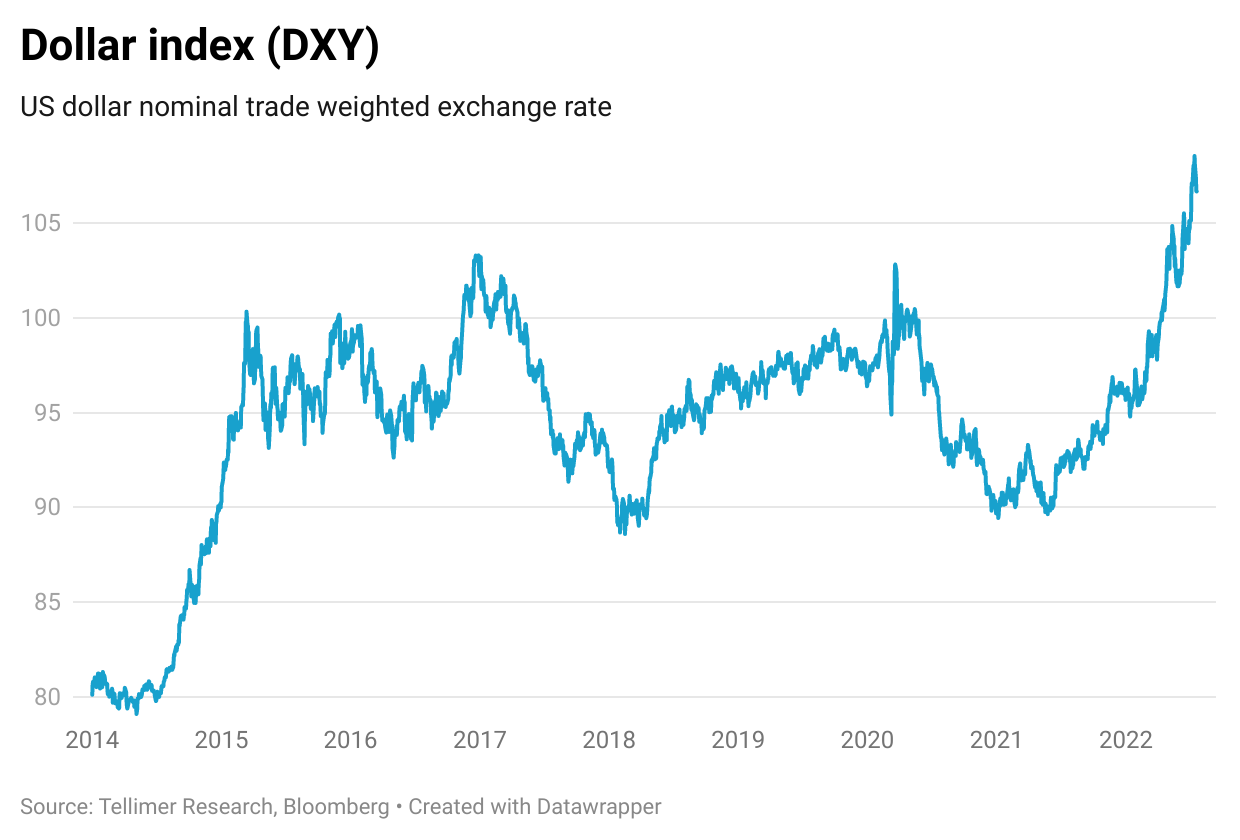 A cynic might say that Biden has conveniently ditched his moral outrage in order to ask Saudi Arabia to produce more oil to bring down its price and curb inflation in the US. The first duty of government is to maintain the economy and prevent rioting in the streets; standards and values matter of course, but not as much as the price of gasoline or inflation, as it turns out.

But it is far from clear that he will succeed in this objective; there are limited reasons for Saudi Arabia or any other GCC country to release more of their reserves of oil to depress the price. In fact, the price of oil (Brent crude benchmark) pushed back above US$100 per barrel after Biden's trip because the market doesn’t believe Saudi Arabia will release more reserves. 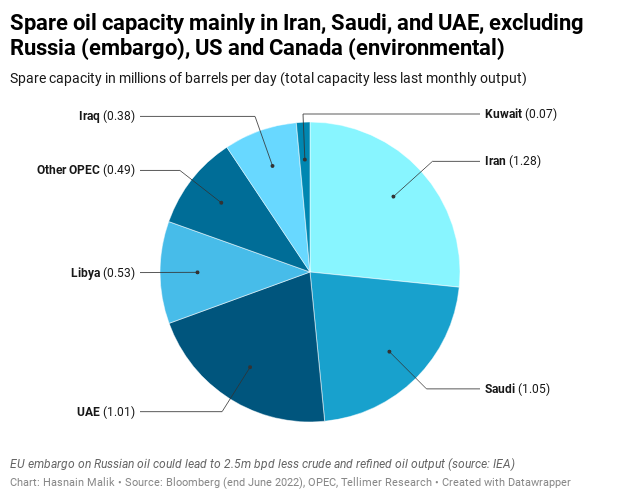 However, the general US-Saudi entente – even if Biden’s key request has been rejected – is also despite the fact that, due to limitations on processing capacity, Saudi Arabia is buying more fuel oil from Russia to generate power than before the conflict in Ukraine. Saudi Arabia doubled its imports of Russian fuel oil in Q2.

In February of this year, Biden said that Russia should be made a “pariah” because of the invasion of Ukraine. Biden obviously likes dishing out pariah status, but perhaps nobody should take the epithet too seriously.

The other reason for Biden’s trip to the Middle East was to try to reignite the Iran nuclear deal: the Joint Comprehensive Plan of Action (JCPOA). Under the JCPOA – which involved the UK, France, China, Russia, Germany and the EU, before President Trump tore it up in 2018 – Iran was allowed to export more of its oil in exchange for limiting its nuclear ambitions, which again would help the US with inflation. 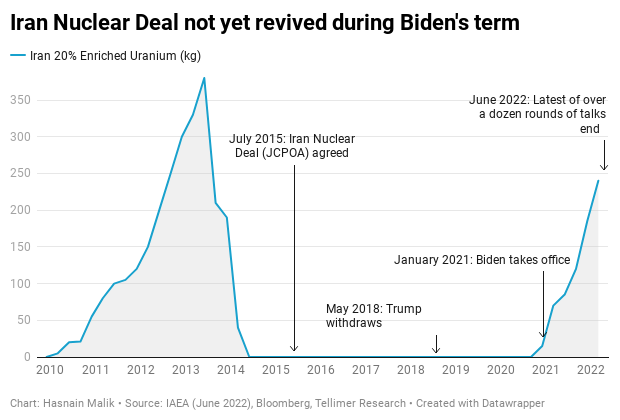 However, now the deal is dead, there is strong resistance to it being revived from both Saudi Arabia and Israel, which have been on better terms with each other than ever before – in large part due to their distrust of Iran. Both are key political and economic allies of the US in the region.

In a recent news interview the Saudi Minister of State for Foreign Affairs, Adel al-Jubeir was asked about the meeting between Biden and MBS and what was said about the Khashoggi case. With his customary and disarming charm, Adel al-Jubeir alluded to the fact that what is said on the campaign trail “sometimes doesn’t get reflected in terms of being in office, because [Presidents] have access to more intelligence and because they have access to a fuller and broader picture”. Having swept that diplomatic embarrassment to one side as an understandable feature of realpolitik, it seems that the Saudi team wanted to focus much more on what Adel al-Jubeir described as the “threat from Iran”.

Just as Russia’s pariah status has driven it to do more business with China, and the energy crisis has caused Saudi Arabia to buy more Russian fuel oil, so the failure of the JCPOA has caused China to import record amounts of Iranian oil: China now imports more Iranian oil than it did before the imposition of sanctions on Iran in 2017.

Over the past year, Biden’s approval rating has fallen from 52% to 38% (and the Democrats face the prospect of losing their slim majority in the US House of Representatives after the November mid-term Congressional elections), and the annualised rate of inflation has nearly doubled to 9.1%: gasoline prices are one of the most significant components of that, and have risen by 59.9%. The president’s visit to the Middle East is unlikely to have turned either of those around. 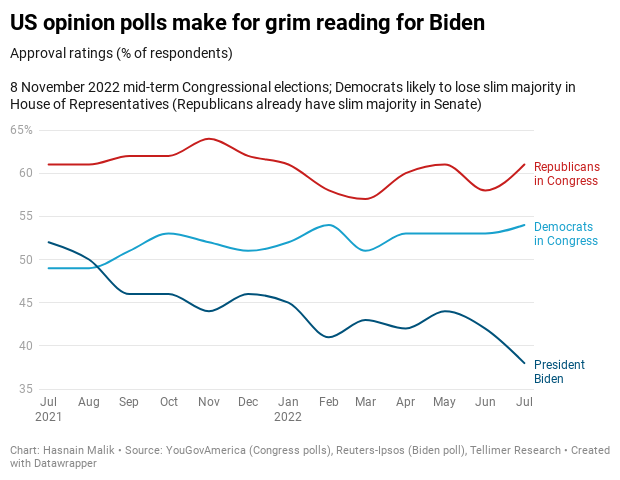 Council on Foreign Relations, What is the Iran Nuclear Deal?