The reflation trade prompted by Biden's control of the Senate should be positive for EM equities initially (higher fiscal spend should mean higher US growth, weaker US$, higher commodity prices). This should provide a tailwind for the non-Technology parts of the emerging markets equity universe which have underperformed over the past year.

But the rally since the start of October 2020 (after Biden's lead in the opinion polls widened) means that valuations have significantly re-rated upwards (eg trailing PB of MSCI EM and FM are now 25% and 16% higher, respectively) and this may mean heightened sensitivity of EM equities to any uptick in US bond yields up (ultimately, higher inflation in the US means higher US rates, stronger US$, and higher borrowing costs in EM).

Separately, the shockingly inflammatory rhetoric and actions of Trump and his more radical supporters will act as another dent in US "exceptionalism" (the notion that US political and economic institutions are uniquely robust).

But the main investment implication for emerging markets, less confidence in the US$ as the dominant global reserve currency, is, at least in the short-term, not likely to play out because of the absence of credible alternatives and the potential for Trumpian actions to be so egregious that they actually prompt a reset of the US political discourse away from radical polarisation.

Biden's control until at least 2022

With Democrat victories in the two Georgia Senate runoffs, US President-elect Biden now controls the Senate and the House, and should face less legislative obstruction to his policy agenda.

The implication of Biden's stronger political mandate for the US is higher fiscal spend and, on a quick timeframe, given that 2022 mid-term elections will test the Democrats' slim majority in the House and its parity in the Senate (without the casting vote of VP-Elect Harris).

The implications for emerging market (EM) equities, particularly those not driven by the secular growth of new Technology, are initially very positive: potentially weaker US$ and higher commodity prices. If at some point stronger US growth – or the perception that fiscal policy has become too loose – drives US bond yields, interest rates, and US$ significantly higher, then this would be negative for EM.

The timing of when this "reflation trade" turns from a tailwind to a headwind for EM is obviously very hard to determine. But what has changed in this framework since prior to the US election is the increase in valuation of most EM assets and commodities. The sensitivity in EM to any signs of inflation in the US are arguably higher now. 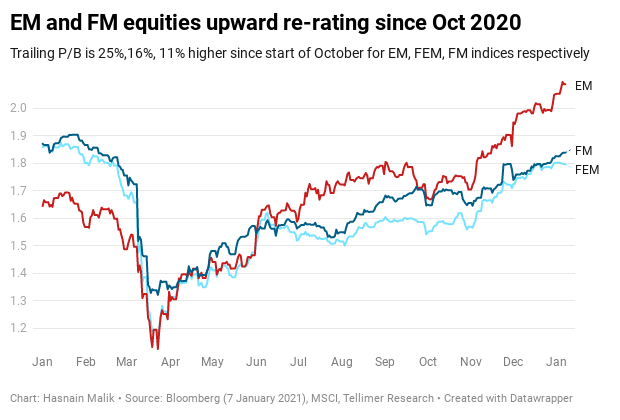 Another dent for US exceptionalism

The actions of radical Trump supporters (not to mention the rhetoric of Trump himself) have likely shocked the older generation of US citizens and prompted some schadenfreude in the older generation of emerging and frontier countries (who have grown accustomed to the external criticisms of their political systems at the first sign of protest and institutional compromise).

More importantly, for our purposes, is the question whether confidence in US political institutions and discourse is going to be sufficiently shaken to weaken the status of the US$ as the dominant global reserve currency (which would drive a sustained period of secular weakening)? In the short-term, this is unlikely because of two reasons: 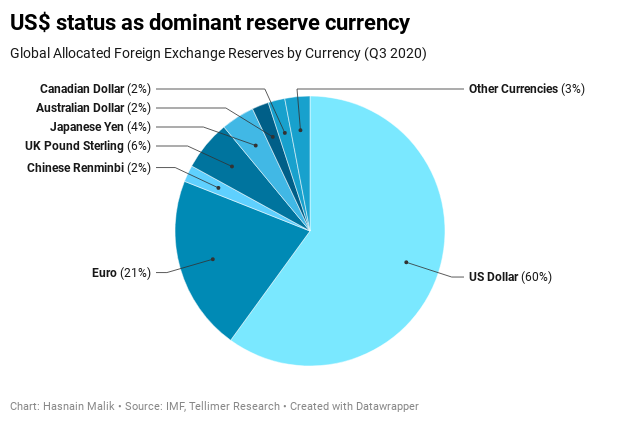 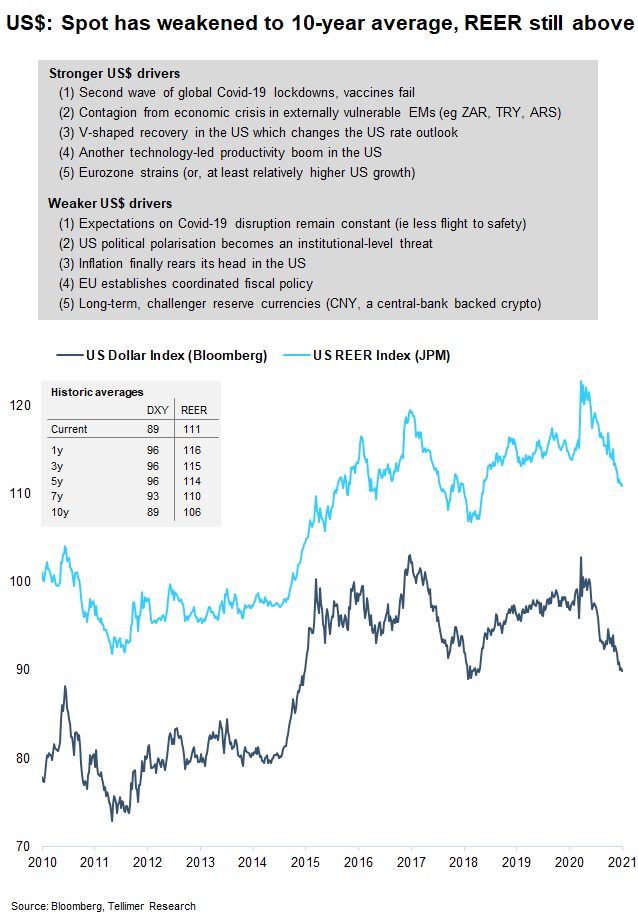 US Dollar as reserve currency after Covid-19? A moot point for EM ex-China (April 2020)

US Dollar: Recent weakness, drivers up and down from here (July 2020)

Why January 6th 2021 will be remembered as a good day for American democracy (Domjan, 7 January 2021)

What the US election means for Emerging Markets (Culverhouse, 31 October 2020)