Last week, a small cardboard box from Amazon arrived at my doorstep. Receiving packages ordered online has become so common that we forget that it was radical a generation ago.

This particular box provided some insight into the transformation. It contained a handsome volume titled Amazon Unbound by Brad Stone. Brad Stone is a respected chronicler of the rise of the Amazon. In 2013, he wrote The Everything Store, the definitive biography of the company and the man behind it.

The book has three lessons for investors in Baby Amazons:

1. Dominant Founders can be a blessing and a curse.

The cover presents a smiling photo of Bezos. He looms large over the company. His journey is well worn but deserves a retelling. Bezos gave up his job at DE Shaw, a hedge fund, in 1994 to build an online bookstore. He listed Amazon in May 1997. It rose like a phoenix, delivering 7400% returns until the dot-com crash of 2000.

After several years of hardship, Amazon resumed its relentless rise in 2004. It is now one of the world's largest companies with a market capitalisation of US$1.6 trillion. The shares have returned 91,000% since IPO and the company employs 1.3mn people worldwide.

Bezos' drive powered the company. It was his initiative that drove its entry into retailing, e-books and Amazon Web Services. These initiatives are integral to Amazon's success.

However, there were many forays that ended in failure. There was a US$170mn write-off for the Fire smartphone. Amazon lost US$500mn on Drugstore.com, before disposing of it. These failures could just as well have engulfed the company.

Bezos's leadership style was not collaborative. The same virtues that drove his success may have caused the failures. He was impatient with colleagues that he found wanting or holding a different view. The book quotes him dismissing colleagues at meetings with the phrase "I am sorry. I forgot my stupid pills today". He used to regularly storm out of meetings and rip apart printouts of pitches.

Baby Amazons – the fast-growing E-commerce firms in Emerging Markets that are following similar paths to Amazon – also tend to have founders with an overarching drive. Coupang’s founder Bom Suk Kim is one of them. He started Korea’s answer to Amazon in 2010 and it went public earlier this year. One of its virtues was that more than 99% of its orders are conducted within 24 hours, putting even Amazon in the shade. However, the super-fast delivery has come at the cost of very high fulfillment costs, which may not be sustainable.

2. You need to stomach the cash burn in e-commerce.

Amazon’s relentless growth in e-commerce was based on an exceptionally high cash burn. Amazon’s sold heavily discounted products on its e-commerce platform to build market share. The market share growth led to more suppliers entering its platform. This powered its volume growth.

This growth had a heavy burden on its cash flow generation. Amazon was FCF negative from 1995 to 2001. It took the September 11th attacks to push it into FCF positivity, when Amazon was able to negotiate better working capital terms from their suppliers.

Our Cash Sustainainability Index shows that most Baby Amazons are cash flow negative. 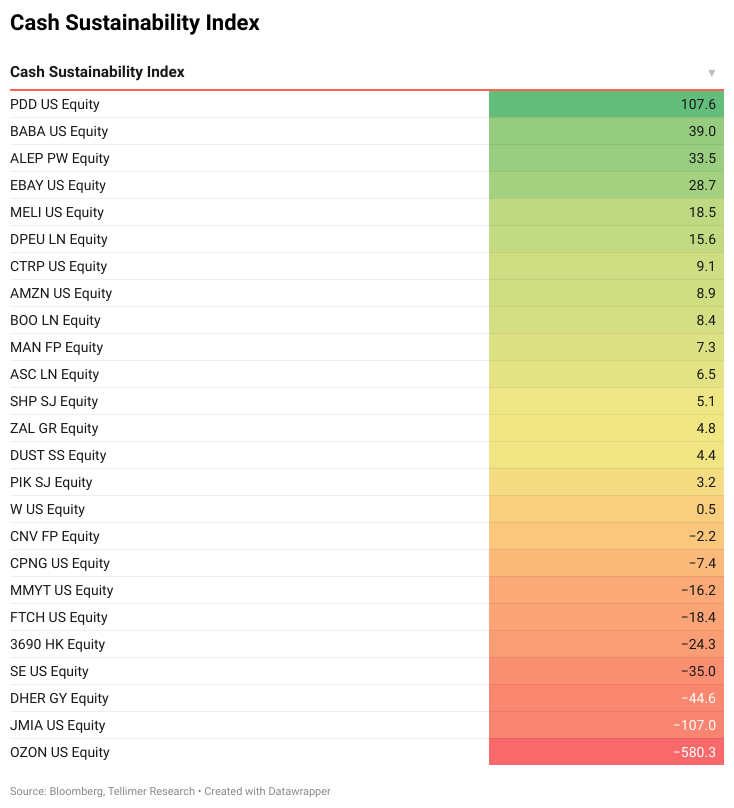 3. Be prepared for volatility.

Amazon has recorded 90,000% growth in its shares since listing. However, there were times when it would take a brave investor to stick with the stock. It lost 90% of its value in the two years after the dot-com crash in 2000. In Q418, it lost 25% of its value. 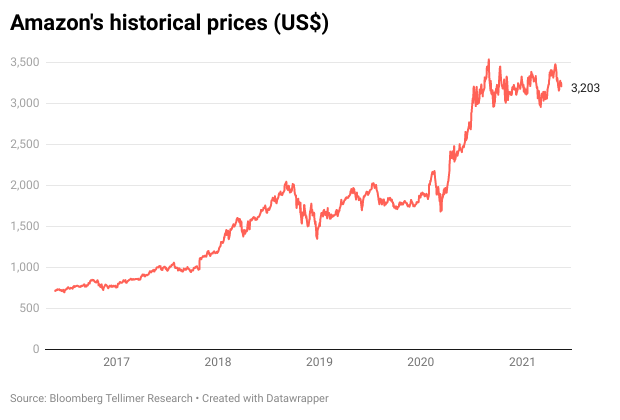 The Baby Amazon Index is down 7% month to date. Jumia, the Amazon of Africa, is down 33% ytd. But this is a small blip compared to the reverses that Amazon investors suffered. 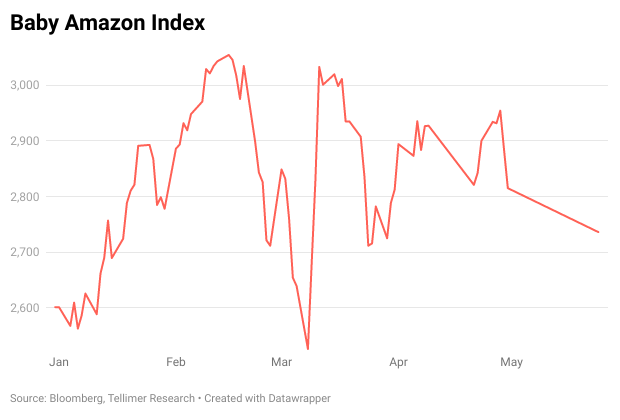 Investors should persist with the Baby Amazons, despite the negative cash flow and volatility. Amazon’s success shows the way.