The market has punished this year’s marquee IPOs, except for Beyond Meat. Uber has lost more than a third of its value, Lyft is 8% below its IPO price. However, Beyond Meat, a producer of plant-based meat alternatives, has tripled in just over a month.

Beyond Meat’s business has generated operating margins of 34% on revenues of US$88m. It is trading at a trailing price to revenue multiple of 91x, which is over 100 times the average of the global meat processors (0.9x revenue).

The company has been touted as a disrupter of traditional business in the same vein as Tesla and Netflix. Plant-based protein is viewed as a cleaner and safer alternative to meat. The US$1.4tn industry is a burden on the environment. Livestock is responsible for one-seventh of the greenhouse gas emissions. Beef is the largest contributor. One-third of the world’s water is used for meat production.

Meanwhile, vegetarianism is on the rise in the West. Meat is viewed as inefficient and harmful to the environment and alternatives like Beyond Meat have been projected as the answer.

However, Beyond Meat’s valuation seems excessive in comparison to traditional meat players. Beyond Meat now has a market cap of over US$9bn, fast approaching that of WH Group (288 HK), the world’s largest pork producer, which has a market capitalisation of US$13.8bn. WH Group has a P/Sales multiple of 0.6x, a PE multiple of 11x and EV/EBITDA of 6x. WH Group is the leading pork producer in China, where pork is the principal form of protein.

Beyond Meat's valuation is hard to swallow, even if there is a doubling of its revenue in three years. Beyond Meat is projected by the 'Street' to generate US$940m in revenue by 2023. Operating margins would be 9%, which is comparable to WH Group’s current margins. Beyond Meat is trading at 10x FY23 projected revenue, even if you assume 25% yoy revenue growth in the next four years.

Beyond Meat’s rise may be an opportunity to accumulate developing market meat players, where traditional meat is enjoying a boom. China’s pork consumption per capita has risen 50% in the past 20 years. Between 2007 and 2017, global meat consumption grew at 2% per annum, which is double population.

Developing market meat players such as 43 HK, CPF TB, CPIN IJ and JAP SP seem to have been mispriced in the wake of the African Swine Flu outbreak. The outbreak is unlikely to derail the demand for meat or the viability of these companies. These players are highly branded and have excellent cash generation. CPF TB is trading at just 5x EV/EBITDA, if one strips out its associate investment in CPALL TB, which is half the peer group average. We have a Buy recommendation on CPF TB with an unchanged target price of THB38.0. Previous outbreaks of swine flu in 2009 and bird flu in 2013 have proved to be buying opportunities in the space. Investors need to look beyond Beyond Meat. 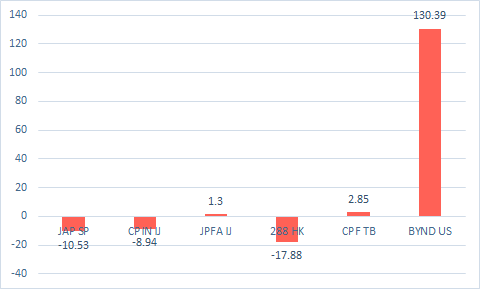