13 May 2021
Published by Tellimer Research

The government's proposal involves a significant PV reduction. It calls for a 30% reduction in principal (the capitalised amount), low initial coupons and a seven-year maturity extension. The coupon starts at 0.5% in Year 1, rising to 1% in Year 2, before reverting to the Superbond's existing contractual rate of 4.9375% thereafter. Coupon payments revert to a semi-annual basis from the current quarterly basis. The bond amortises in 20 equal semi-annual payments, commencing November 2031. The bond matures in May 2041 (currently February 2034). We summarise the terms below. 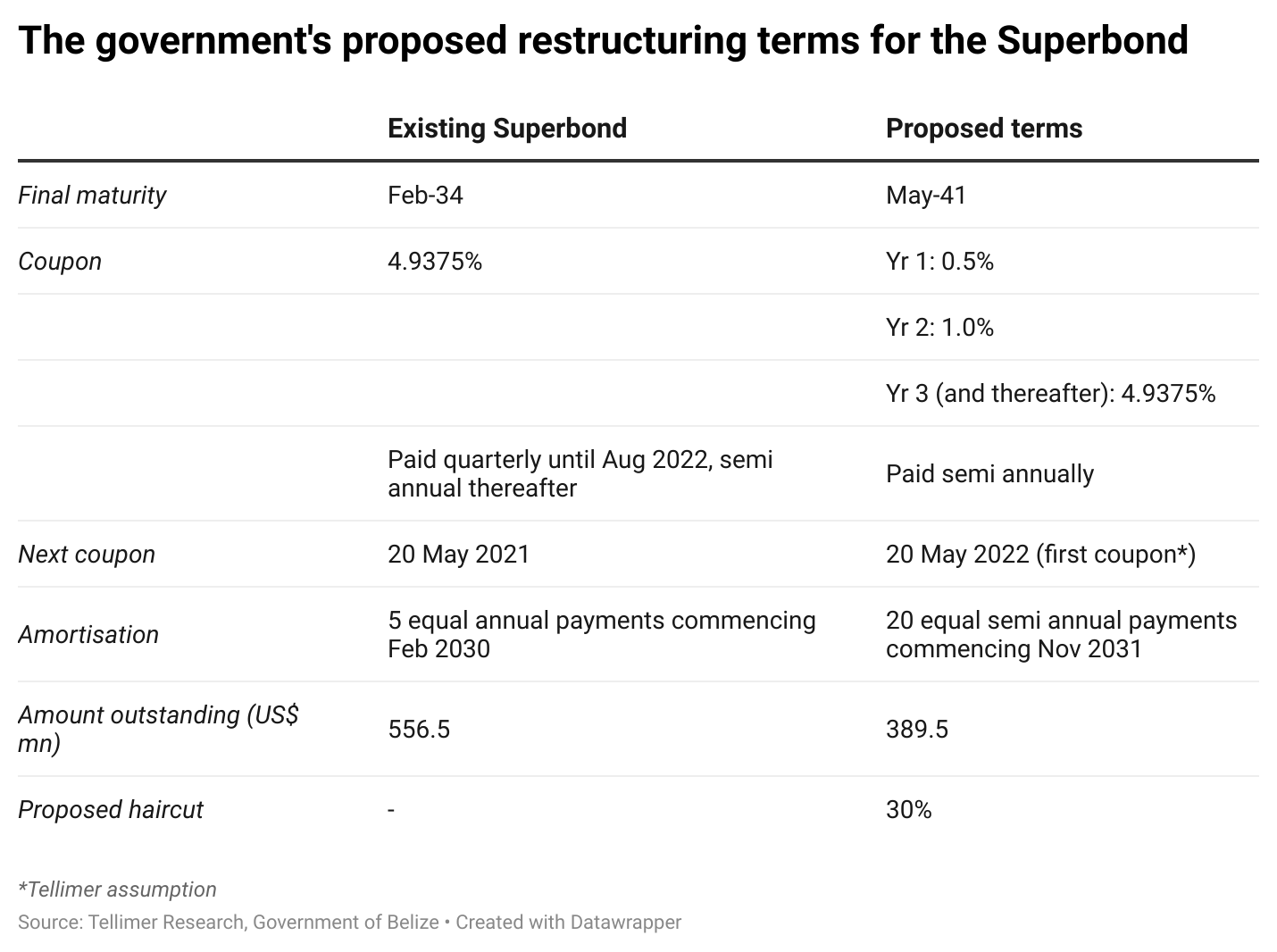 We think there is some ambiguity over the coupon schedule from the information provided. Based on the authorities’ accompanying fiscal projections, we deduce that the first coupon is May 2022, and this is the only coupon at the annual rate of 0.5%. The coupon steps up to 1% in November 2022 and May 2023, and rises to 4.9375% in November 2023. Hence, bondholders won't receive anything for a year, assuming the restructuring is effected now.

We calculate a recovery value of US$30 at a 12% exit yield, rising to US$37 at a 10% exit yield, with PV expressed per unit of existing principal for value today. In fact, the combination of a 30% principal haircut and maturity extension proximate to the illustrative scenario in our prior research of a 50% nominal haircut (with no other changes to payment terms). Our estimated recovery values are shown below over a range of exit yields. 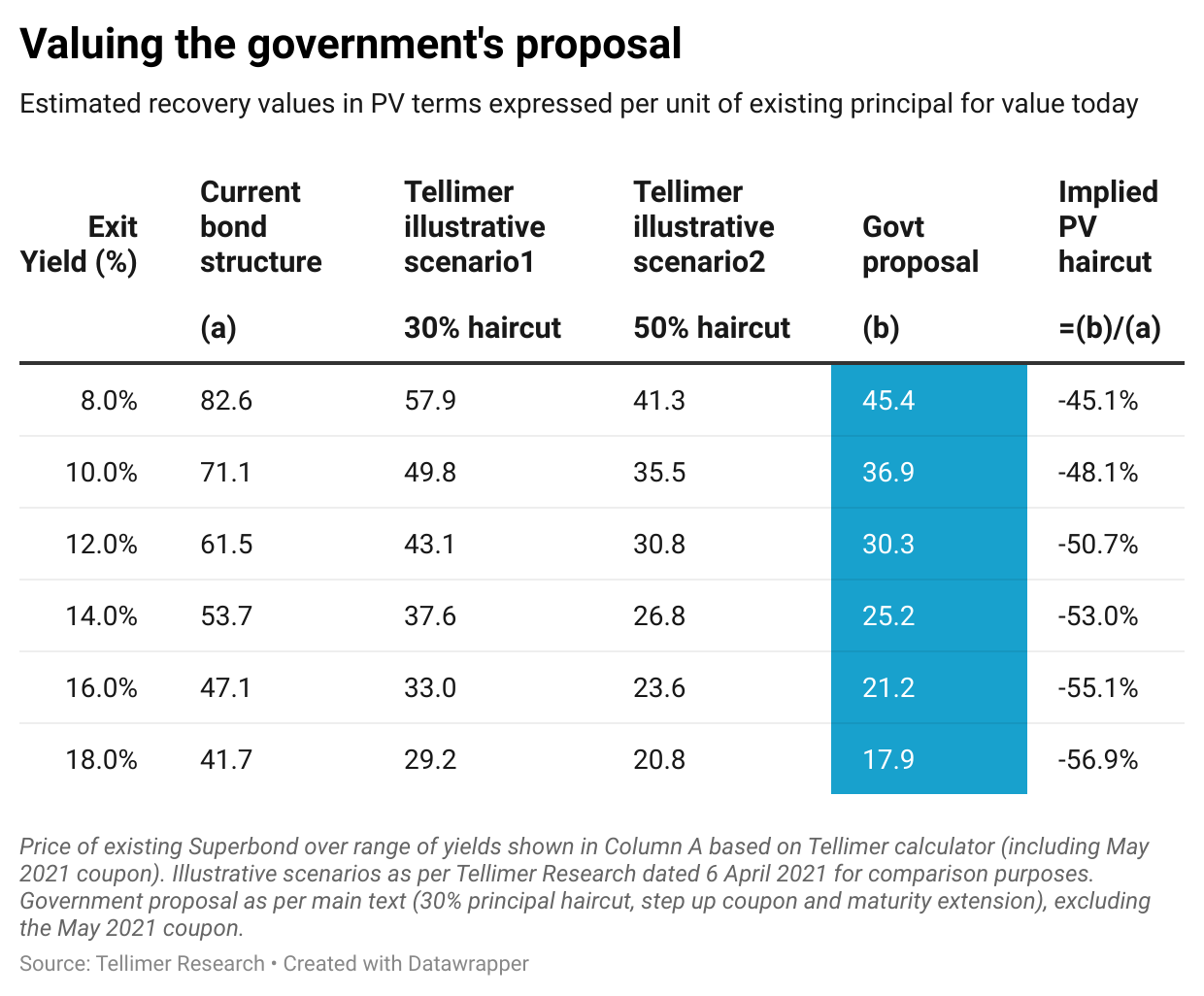 We exclude the scheduled May 2021 coupon from our estimated value of the government proposal as the government is now seeking to make payment subject to negotiation and we don't know how it will be dealt with – see below (it is worth c1.3pts on our calculations). However, if it goes unpaid, past due and accrued could be recognised in any deal, for example, as capitalised claim. Assuming first coupon is May 2022, this means no payments to bondholders this calendar year.

The proposal implies a 50% haircut in PV terms, according to our calculations, based on comparing the PV of the new bond with the PV of the existing bond (assuming the May coupon will be paid), at the same discount rate (12%).

Our estimated recovery value for the government's proposal of US$30 at a 12% exit yield compares with the current price of the Superbond of US$41.4 on an indicative mid-price basis as of cob 12 May on Bloomberg. The current price implies a yield of c18% on our calculations (with accrued). 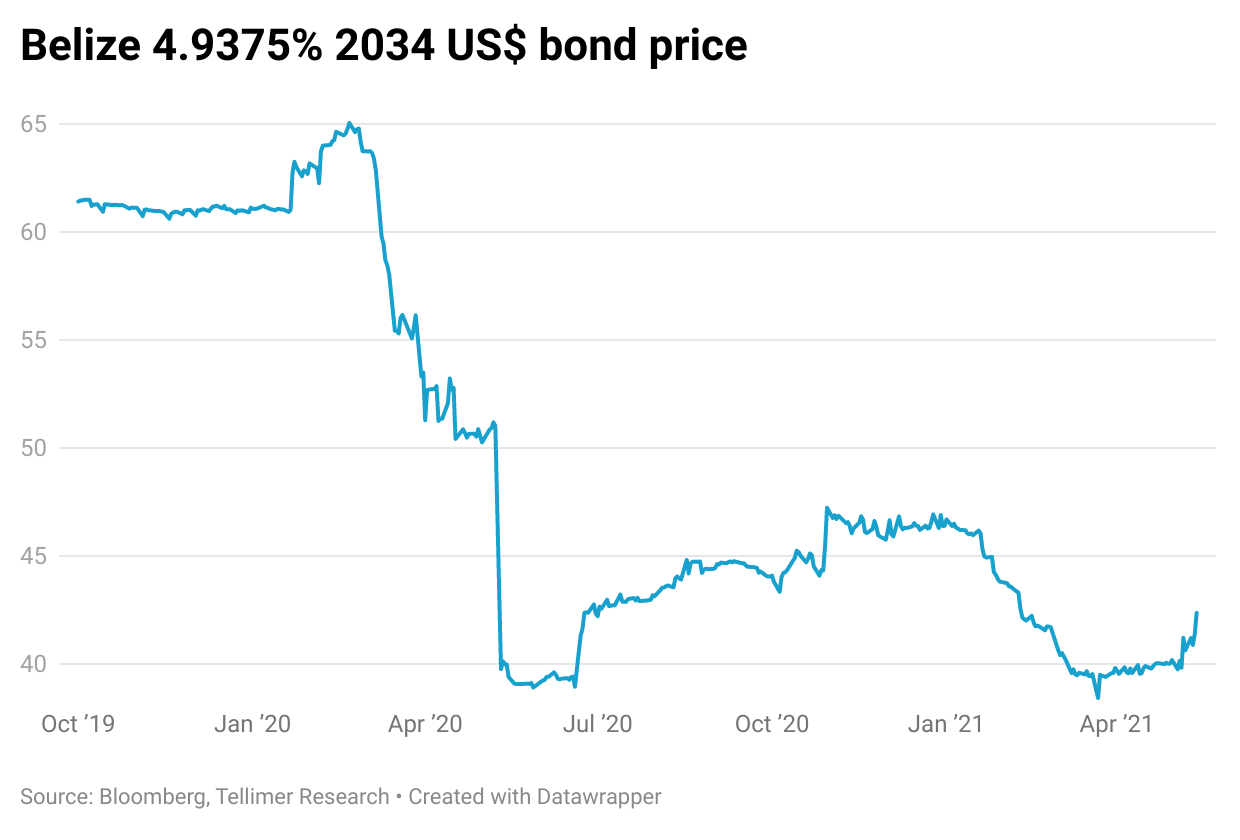 We think the government's proposal is unlikely to be accepted by bondholders, who have other demands too. The proposal seems to be an initial low ball offer, and puts a floor under current prices. We doubt bondholders will like the terms, judging by the lack of response, and they will try to do better. But how much better is the question.

The government stated bondholders cancelled a planned meeting with the authorities to discuss the restructuring on 3 May after the committee would not agree to an extension of NDAs and indicated that a meeting was unlikely to be worthwhile unless Belize agreed to an IMF programme.

Moreover, the government also announced on 10 May its intention to consult with bondholders regarding “potential alternatives to punctual payment of the next coupon”, which is due 20 May. The government hasn’t said yet it won’t pay it, but this surely signals the government is looking to avoid paying it, or to defer it, without electing at this stage for a hard default. One might ask why pay when you intend to restructure, but the government had hoped to make substantive progress on the Superbond restructuring by the time of the coupon. It is now forced to revisit its strategy. Default would, however, put creditor negotiations on a confrontational footing from the outset (or more confrontational than they already are).

There is a 30-day grace period on payments, so the government may seek to use that to buy more time to negotiate, although, given the distance between the two sides, it is not clear how much progress can be made before then.

We retain our Hold on the bonds

Default could lead to further downward pressure on the bonds, although, arguably, it has been well flagged, so any technical selling may be limited. Conversely, we see upside potential as a robust and well-coordinated creditor committee may be able to negotiate better terms – although liquidity in this small bond with concentrated holdings may be limited, and even more limited post-restructuring if the bond falls out of the benchmark index.