Belize: A case of too little, too often

The Government of Belize signalled its intention to seek another debt restructuring on 19 March, essentially its fifth credit event in 15 years, a decision that some investors may have hoped was avoidable but feared was somewhat inevitable. The announcement was largely presaged in the IMF's concluding statement for its Article IV mission on 12 March.

The announcement comes after Belize gained some temporary debt service relief on its sole eurobond (the "Superbond") last year in reaction to Covid, when bondholders approved the authorities' consent solicitation to defer some upcoming coupons. Belize was therefore one of the six countries to default last year. Coupons due in August 2020, November 2020 and February 2021 were capitalised, but the deferral period is now over and the next scheduled coupon payment is 20 May 2021, under the bond's quarterly payment profile which was also triggered last year.

The intention to restructure the bond also follows the election of a new government in the country's general elections in November 2020. The opposition PUP party defeated the UDP party of the incumbent Prime Minister Dean Barrow, with 58.8% of the vote, and gained a parliamentary majority with 26 out of 31 seats. Johnny Briceno, leader of the PUP, was sworn in as PM on 12 November.

In that regard, Belize has similarities with some other recent sovereign restructurings, which have taken place in the context of the arrival of a new opposition-led government that inherits a difficult economic situation. It then becomes an easy decision to seek a restructuring early in its mandate and blame the previous administration for the mess. It follows in the footsteps of Barbados (2018), Argentina (2019), and Suriname (2020).

The irony is that the Superbond was created back in 2006-07, under the then PUP government, while its successor, PM Dean Barrow of the UDP, elected soon after in 2008, spent the next 12 years complaining about what it inherited. The PUP now has a chance finally to do something about the monster it created, which has been something of a millstone around the country ever since.

The other irony is that Belize's Superbond is as big today as it was when it was created 15 years ago, despite two further restructurings (2012-13 and 2016-17). These have involved not only little by way of principal haircut, but also the capitalisation of interest along the way. The Superbond that emerged out of the 2006-07 restructuring, which consolidated a number of small notes and bank loans, was US$544mn in size (40% of GDP). Today, after capitalisation of interest from last year's consent solicitation, the bond is US$556mn (34% of GDP).

The Superbond has been trading at distressed levels for some time. The bond is indicated at a price of US$39.5 (mid price basis as of cob 2 April on Bloomberg), implying a yield of c19% on our calculator, with prices falling 13% this year. We think the bond is pricing in a significant nominal haircut – c35% – at a 12% exit yield, other things unchanged, which we think is a fair assumption. Belize's high public debt burden (126% of GDP) and vulnerability to weather shocks point to the need for sizeable haircuts, notwithstanding the new government's ambitious fiscal consolidation plans. 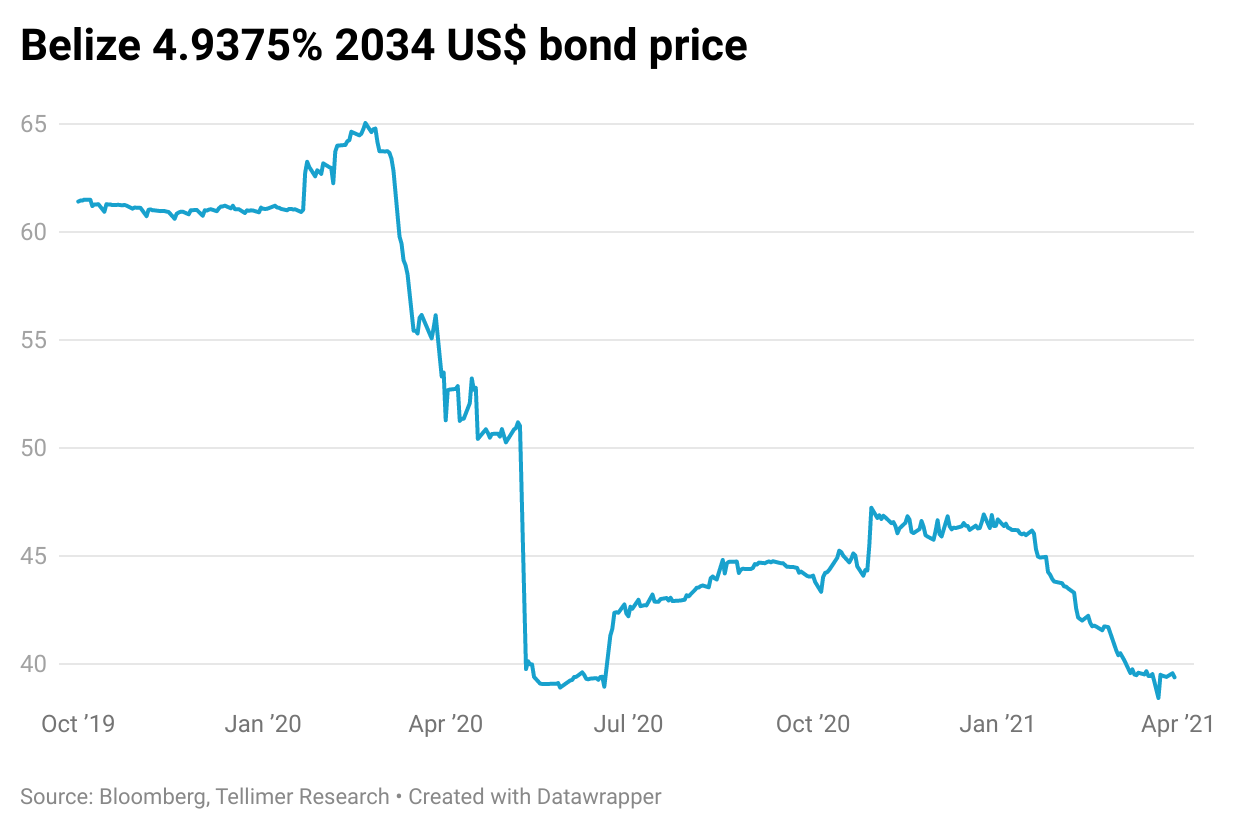 The full report is available for Insights Pro subscribers