Final results from the Central Election Commission of Belarus announced today show that President Alexander Lukashenko, incumbent since 1994, won Sunday’s election with 80.1% of the vote. His main opposition, Svetlana Tsikhanouskaya, wife of arrested blogger and pro-democracy activist Siarhei Tsikhanouski, gained 10.1%. The results mirror the official exit polls and preliminary results that were initially reported. Tsikhanouskaya rejected the initial results and declared herself the winner, but has since left the country for Lithuania for fear over her, and her children’s, safety. She was detained by police on Monday after lodging a complaint at the election commission. Other defeated candidates have also lodged complaints over the election result. Tsikhanouskaya has called for talks with the government over a transfer of power.

Indeed, the opposition claim to have won the election and it wasn’t even close. Some reports, citing independent exit polls, show Tsikhanouskaya achieved 70% of the vote, compared to Lukashenko’s 16%, an almost complete reversal of the official results. While not a politician, and a last minute entry to the field, Tsikhanouskaya’s emergence as an opposition figurehead demonstrates a clear change in public opinion since the 2015 election. That she also managed to mobilise such support so quickly is also surprising, but it may be hard to maintain that momentum.

The country has now entered its fifth day of protests since the election. Sometimes violent protests against the result have been held in the capital Minsk and various other cities in the country each night. According to reports, some 6,700 people have been detained by police and two people have died. Reports also allege police brutality, and torture, of those arrested (some people have been released perhaps to try to diffuse pressure on the leadership). From exile, Tsikhanouskaya added her support for a planned general strike today and nationwide demonstrations over the weekend. Reports say that some workers at state-owned companies will join today’s strike. Some strikes began yesterday.

The Western international response has been critical, although so far no specific action has been taken, and it is unclear if such pressure will make a difference and, if so, when. Leaders and foreign ministers from a number of European capitals, including Germany, Sweden, Slovenia, Hungary, Lithuania, Poland, Austria and Czech Republic, have called for sanctions (presumably targeted sanctions on the regime and key individuals, such as travel bans and asset freezes) and an election re-run. EU foreign ministers will discuss the situation in Belarus in a video conference today. An EU Council statement on 11 August said the elections were neither free nor fair. The White House and US Secretary of State Pompeo have also expressed their concern. On the other hand, Russia and China congratulated Lukashenko on his victory.

Before the election, Lukashenko said he would prevent street protests like those seen in neighbouring Ukraine’s Euromaidan demonstrations in 2013, which ultimately topped President Viktor Yanukovych. As clashes with police continue, questions may be asked over the strength of his grip on power now and going forward. But it seems as though he is not willing to back down yet.

It is difficult to know what happens next. We highlight some possible scenarios:

The longer post-election uncertainty prevails, the greater the economic cost will be, distracting policymaking and undermining domestic confidence and foreign investor sentiment.  Belarus was already seeing slower growth related to Covid-19, and a much deeper recession — and associated fiscal deterioration — cannot be ruled out, along with more pressure on the exchange rate.

In particular, in the near term, the disputed election will raise concerns over funding needs this year (and going forward, if this uncertainty persists). We estimate a public sector financing requirement this year of about US$3bn, based on projected fiscal deficit of 0.8% of GDP and US$2.5bn of principal amortisation (as reported in the bond prospectus). June’s eurobond issuance, for a combined US$1.25bn, will have covered about 40% of this financing need.

The government also made a request for an emergency disbursement (RFI) from the IMF, which was confirmed by the Fund in May (we don't know how much was being sought, but the maximum amount, 100% of quota, would amount to cUS$1bn). This is a third of our estimated financing requirement. However, that request hasn’t yet been approved (and it not exactly clear to us why not, given all the other approvals made so far and that Belarus didn’t suffer from an unsustainable debt burden that has hindered requests from others, such as Sri Lanka and Zambia).

Whilst it is not clear to us if the IMF money was crucial to the government’s financing plans, it could be important, and if it was crucial, and if there are now any doubts over the IMF money being available, then that would cast a large hole in Belarus’s financing plans. The IMFs US and EU board members could seek to block its approval given the reaction to the election. The government could, however, rely instead on more domestic funding and, presumably, other external bilateral funding, especially from Russia (Russia accounts for 44% of public external debt), but these might not be sustainable on their own if commercial and multilateral funding options narrow due to the political crisis. 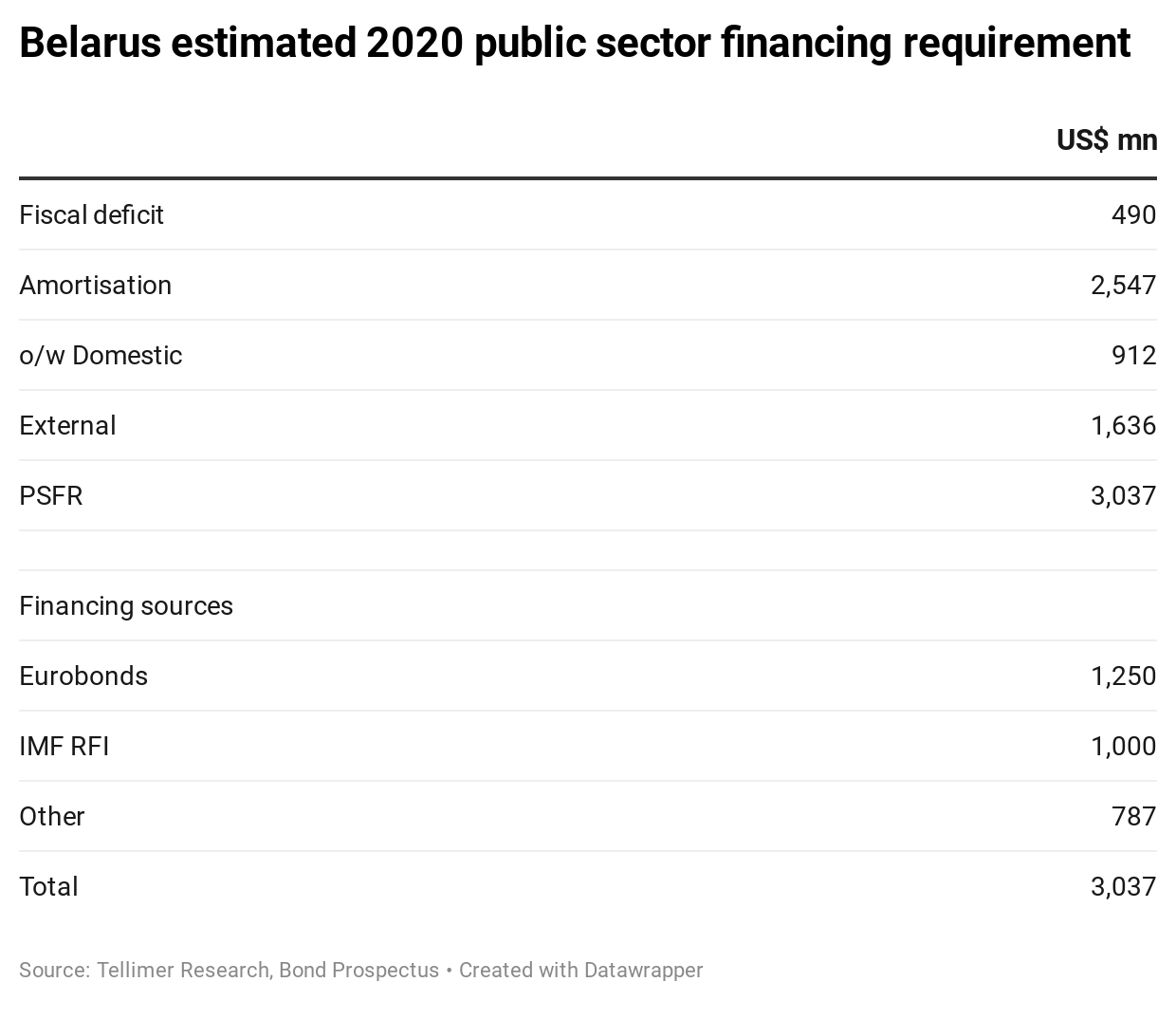 Investors may also fear the impact of economic sanctions on Belarus and the impact of ESG considerations on the demand for bonds and trading liquidity. In the limit, Western sanctions could even target bond trading – like Venezuela – although we think we are a long way from that.

The BELRUS US$ curve has therefore inverted, suggesting investor concerns in the near-term over financing and possible debt distress. Public debt is, however, around 50% on IMF figures, although a weakening economic situation and exchange rate fall could see this rise quickly to more unsustainable levels, while reserves coverage remains adequate and annual debt service on the bonds (interest only until 2023) is manageable (just US$215mn). Hence ability to pay should be secure in the near-term, although capacity to pay would be eroded if the political uncertainty persists, while sanctions or international pressure could force the leadership into a strategic default.

We assigned a Buy to BELRUS in our research dated 30 July (see here), although warned as a downside risk, that the outlook for the bonds could be limited in the event of a disputed result that prompts more protests and unrest, undermines governance and donor appetite, and raises uncertainty about the government’s response to it. 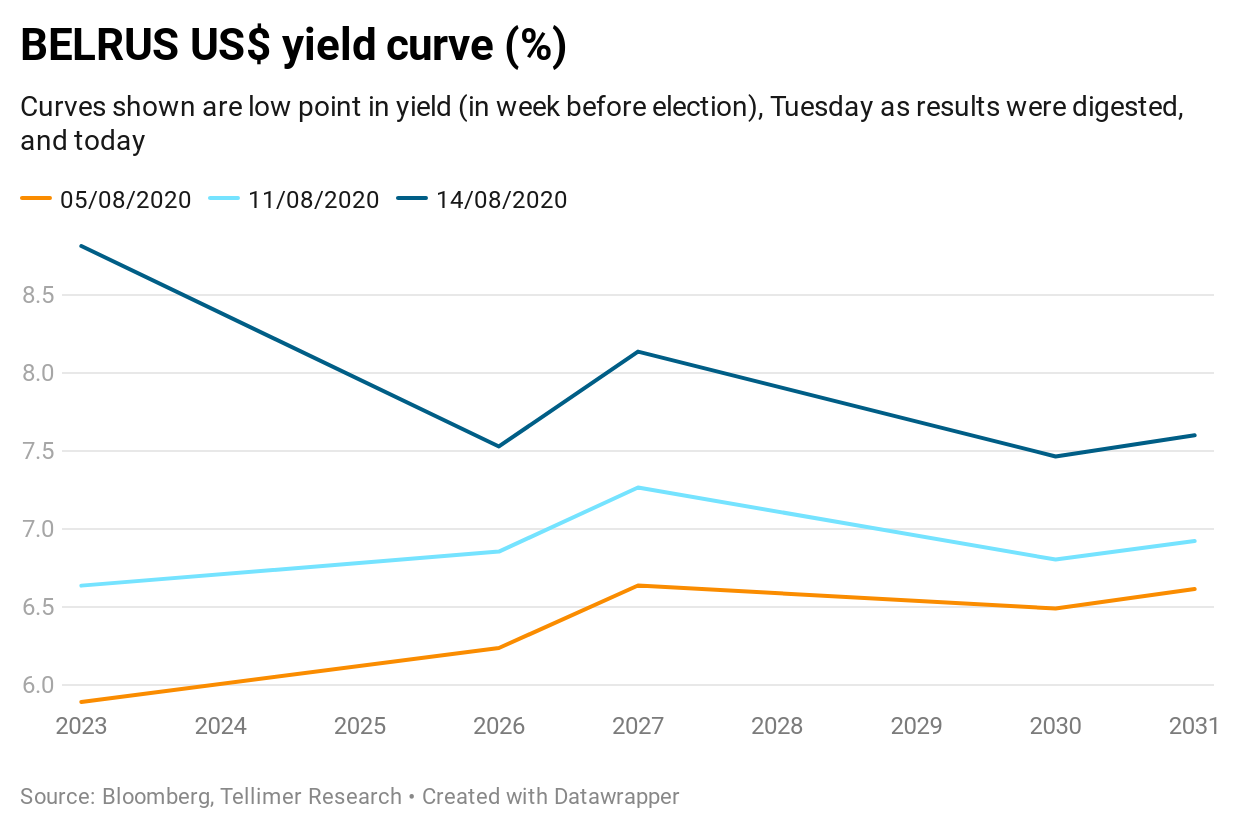