President Lukashenko (aged 65), who has won every election since independence in 1991, is widely expected to gain another five-year term next week, and – if so – we expect policies will likely remain essentially the same. And unlike other countries (eg Bolivia and Sri Lanka), Lukashenko has been intent on holding the election, despite coronavirus.

However, unlike previous elections, Lukashenko may be facing his greatest challenge from the varied opposition groups, in part a reaction to the government’s response to Covid-19. Indeed, the president defied global convention by holding a military parade on 9 May, perhaps as a pre-election show of strength and patriotism, and avoided the hard lockdowns seen elsewhere. But various protests have been held in major cities this year, including a gathering of about 1,000 people in the capital Minsk on 24 May. Many of the protesters wore face masks, showing disagreement with the president’s view that strict coronavirus measures are unnecessary. The government has been accused of suppressing opposition figures, and Lukashenko has pledged to prevent demonstrations on the streets like those previously seen in neighbouring Ukraine.

Tensions have further increased after a well-known blogger, Sergei Tsikhanovski, was arrested on 29 May. He was critical of the government and was arrested while signatures were being collected for his wife Svetlana Tikhanovskaya’s presidential bid. The latter is now working to challenge Lukashenko with the wife of Valery Tsepkalo, who was barred from running, and the spokeswoman of jailed banker Viktor Babariko, who failed to register as a candidate. Media reports that nearly 3,000 people attended a rally held by the three women on 25 July. Tikhanovskaya says that her goal is fair elections and that she is not a politician.

Economy hit by coronavirus, but Russia agreement is a positive

Belarus’s economy has been hit hard by the impact of coronavirus due to slower global growth, lower oil and commodity prices, and a fall in remittances. Real GDP is expected to contract by 6% this year, according to IMF WEO projections in April, although a V-shaped recovery is seen in 2021. The IMF expected 3.5% growth in 2021, a view shared by the government. The current account deficit is expected to widen to 2.9% of GDP from 1.8% in 2019.

However, while the government’s public policy response to the pandemic has been a bit unorthodox, the macro policy response, especially monetary policy, has been orthodox. The National Bank of the Republic of Belarus (NBRB) has injected liquidity into the financial sector and cut interest rates by 125bps to 7.75%, while the ruble, which had already drifted lower in January-February, depreciated by 14% against the US$ in March (it has since appreciated by 6% since its lows). The government has also announced a fiscal stimulus package, although its details and size are unclear. Fitch now forecasts an “adjusted general government budget deficit” of 4.3% of GDP in 2020, from a surplus of 1.6% in 2019. 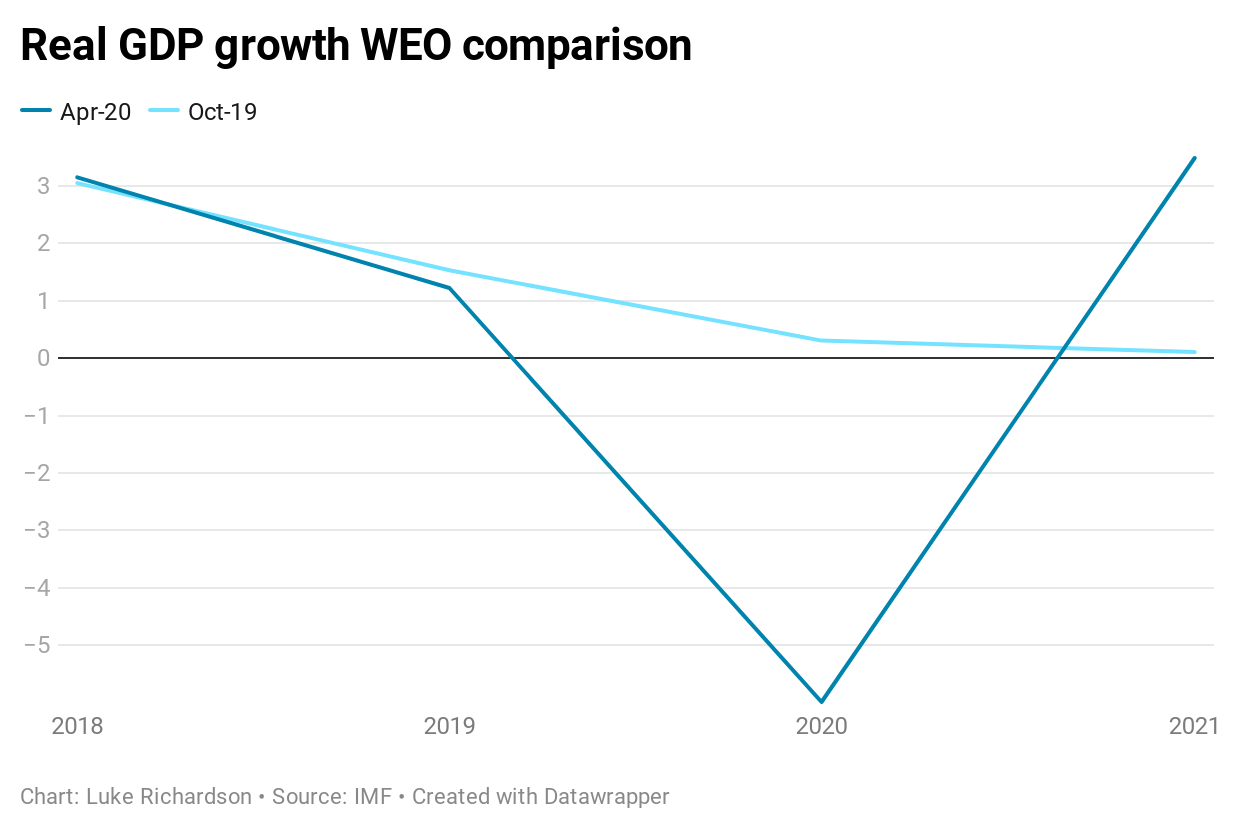 Growth prospects are however supported by a new oil agreement with Russia. Russia had long supported Belarus financially by providing cheap oil that Belarus then sold abroad at market prices – the arrangement was worth c3% of GDP, according to media sources. A new excise tax brought in by Russia in 2018 diminished this economic support, leading to lower growth forecasts for Belarus and diplomatic tensions between the two countries. Some form of compensation from Russia had been expected as a result, and speculation around the size of this compensation, and a longer-term solution, has influenced the evolution of the medium-term outlook. On 21 February, Lukashenko announced that Russia had suggested favourable compensation.

Belarus and Russia are also at odds over gas purchases. On 29 May, Russia’s Gazprom said that it will begin discussions over gas supplies to Belarus from 2021 after it has paid its gas purchase-related debt in full. It claims that Belarus owes US$165.57mn for Russian gas. The Belarusian Energy Ministry believes that it does not owe Gazprom for gas supplies and all payments are being made according to existing contracts. The cause of the dispute may lie in disagreements over determining the relevant gas price.

Belarus does have alternative energy supplies, and started to import gas from Norway in January. However, it is in both sides’ interest to find a diplomatic solution to energy supply disputes, and the oil agreement increases confidence that a longer-term solution will be found.

Belarus’s public debt burden is modest. Public debt was 34% of GDP in 2019 according to official figures in the bond prospectus for the recent issue, although we expect this to increase due to the pandemic, as a result of a wider budget deficit and lower GDP. For instance, Fitch’s latest ratings statement in May (affirming its B rating) noted general government debt (including guarantees) will increase to 49.6% of GDP from 41.9% in 2019. Meanwhile, the IMF WEO October 2019 projected public debt/GDP at 46% in 2019 compared with the government’s figure of 34% in its bond prospectus. While the IMF figures show the public debt ratio has edged down in recent years from more than 50%, the difference in levels between the government and IMF figures reflect difference in the definition of public debt and, crucially, domestic debt. 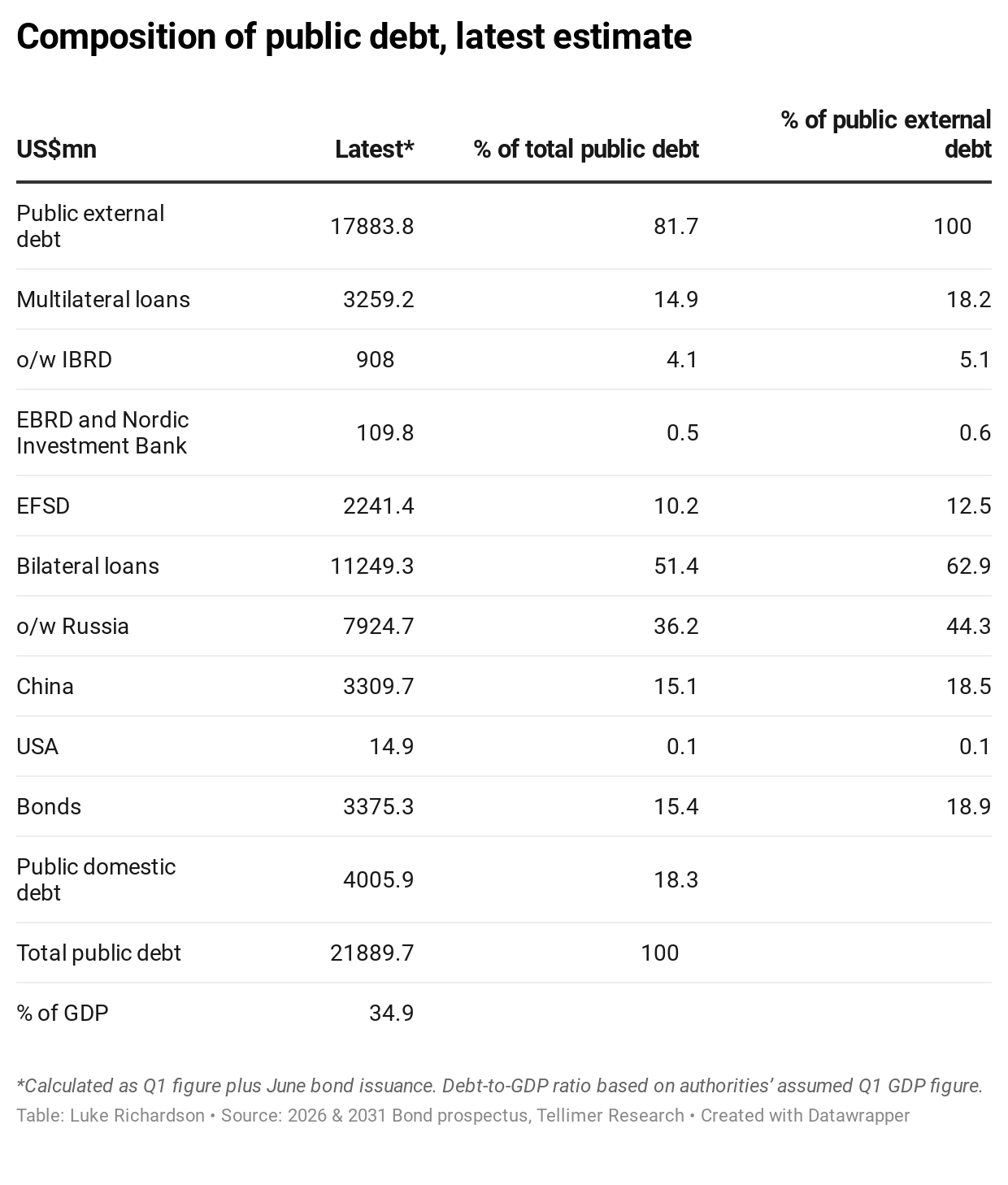 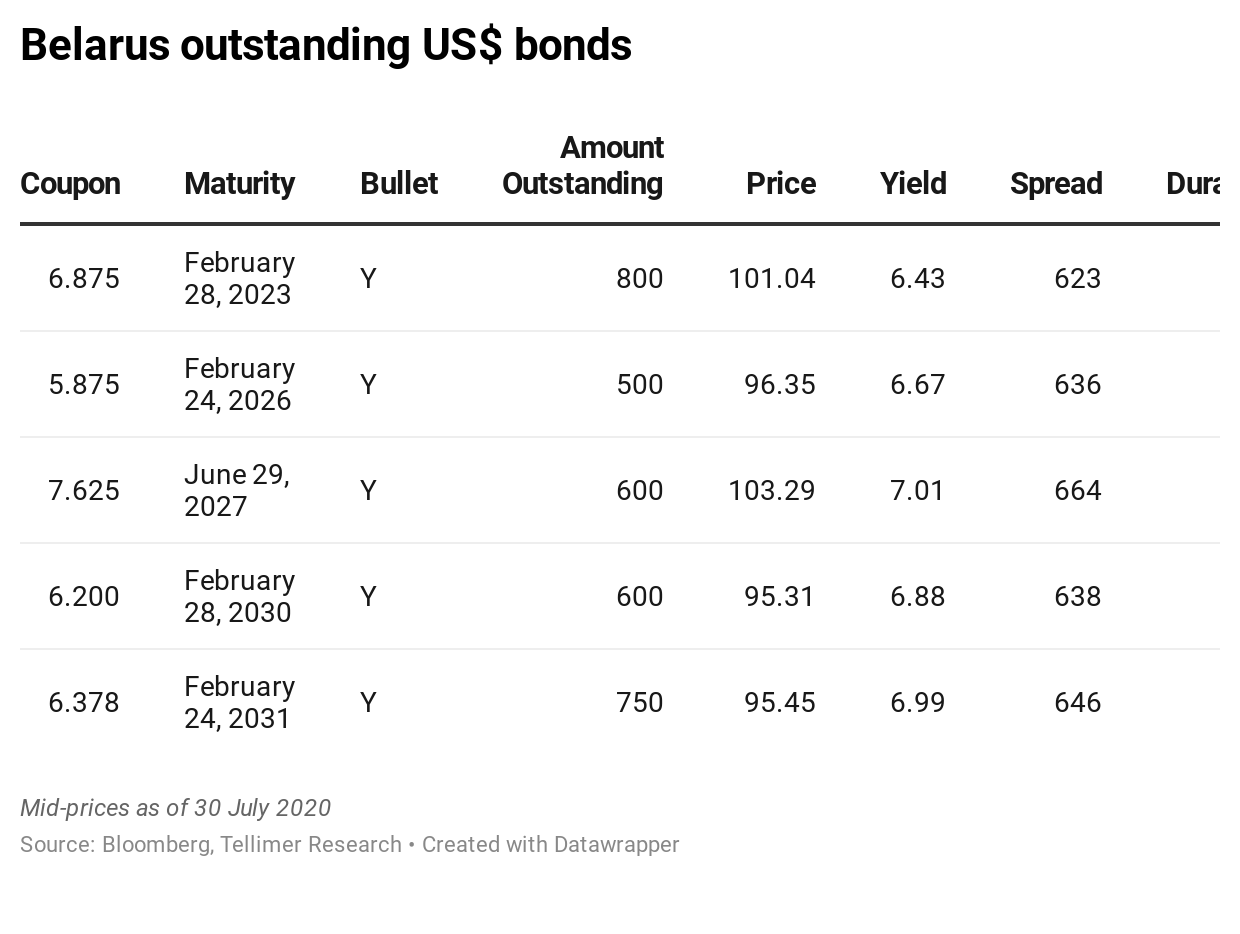 Belarus also has a solid liquidity position, which various credit rating agencies have cited in support of their credit rating assessment. Total reserves stood at US$9.4bn at end-2019, equivalent to c2.7 months of 2019 goods and services imports. Reserves declined by over US$1bn to US$7.8bn in March, on official figures provided by Haver. This decline was due to debt service payments and currency interventions in response to volatility from the Russian rouble’s depreciation of 16% against the US dollar during March. Reserves subsequently recovered to end May at US$7.9bn. Fitch expects reserves to end 2020 at US$7.1bn. 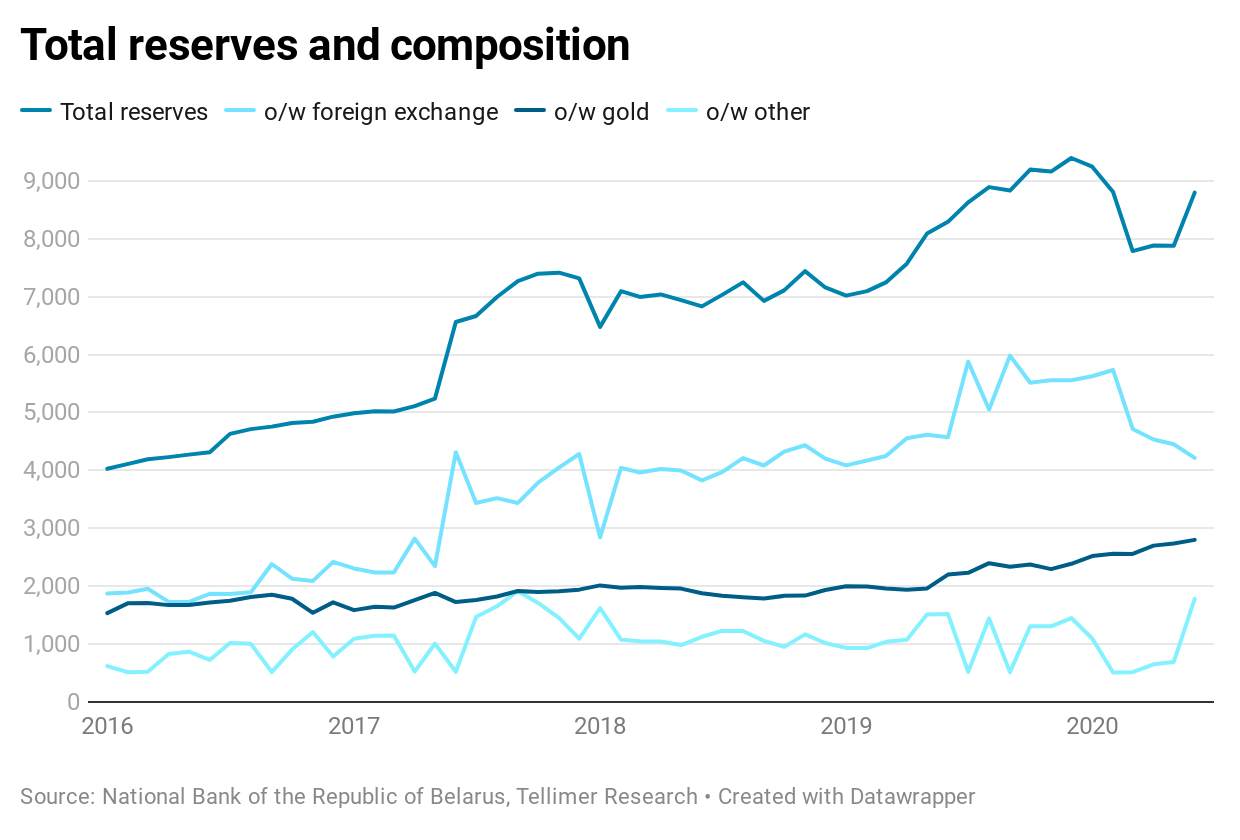 Higher financing needs as a result of the impact of the pandemic may put an additional burden on Belarus, although a variety of potential official sector financing options are available. The government has requested IMF emergency financing under the rapid financing instrument (RFI) to respond to the pandemic (the maximum amount available, 100% of quota, would amount to about US$960mn). The IMF confirmed the request on 21 May but no decision has yet been made. Moreover, as Belarus does not currently have an IMF programme, this could be considered if necessary (its last one was an SBA over 2009-10 in the wake of the GFC). Other IFI and bilateral support could also be available. Meanwhile, Belarus retains access to the international bond market, as evident by the recent bond issues, even after the recent widening in yields, although market appetite may be sensitive to the election outcome.

We note, unlike neighbouring Tajikistan and Uzbekistan, Belarus is not (currently) eligible under the G20 debt service suspension initiative (DSSI).

Creditworthiness continues to hold up, but there are potential risks

Although opinion polls are not available, and despite a greater threat from the opposition, it is widely assumed that Lukashenko will remain president after the election in August, which removes political uncertainty and indicates a continuation of current policies. However, nor do we expect an accelerated reform programme if he wins.

Indeed, the IMF and other observers have praised the Belarus authorities in recent years for their effective and improving policies and reforms that have supported macroeconomic stability. These have included prudent monetary policy, a commitment to a floating exchange rate, accumulating foreign reserves and fiscal consolidation, supported by the moderate debt burden. Moody’s noted in February that the country’s relatively high wealth supported the economy’s resilience to shocks.

None of three major credit rating agencies have made a change to Belarus’s ratings since March 2018, and they currently rate the sovereign B3/B/B (with stable outlooks). The three ratings have been affirmed this year, most recently Fitch’s B rating on 15 May. The country has never defaulted on its debts, despite sometimes low international reserves.

We think sound liquidity conditions and availability of funding sources limit near-term risks to debt service on the bonds. The key risks in our view would be 1) a bigger and/or more prolonged impact from coronavirus; 2) a closer or contested election result, still in Lukashenko’s favour, which impacts governance and encourages pursuit of more populist policies; and 3) withdrawal of Russian support or neighbourly tensions. Weak governance and poor transparency, commodity dependence and a reduction in remittance flows also pose additional risks. Moreover, high gross financing needs also pose a risk, driven by private sector external indebtedness – over half the total external debt of US$40bn relates to private sector debt, although it has been broadly stable in recent years. 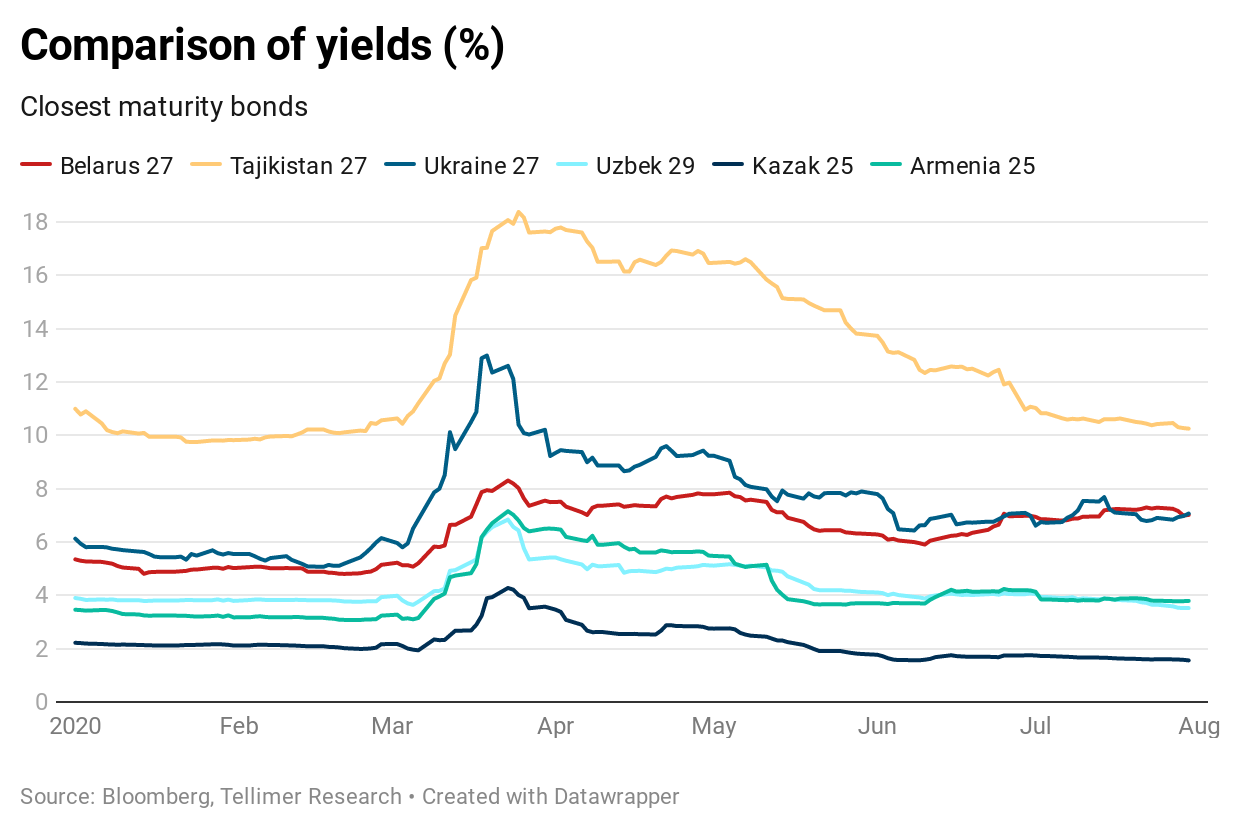 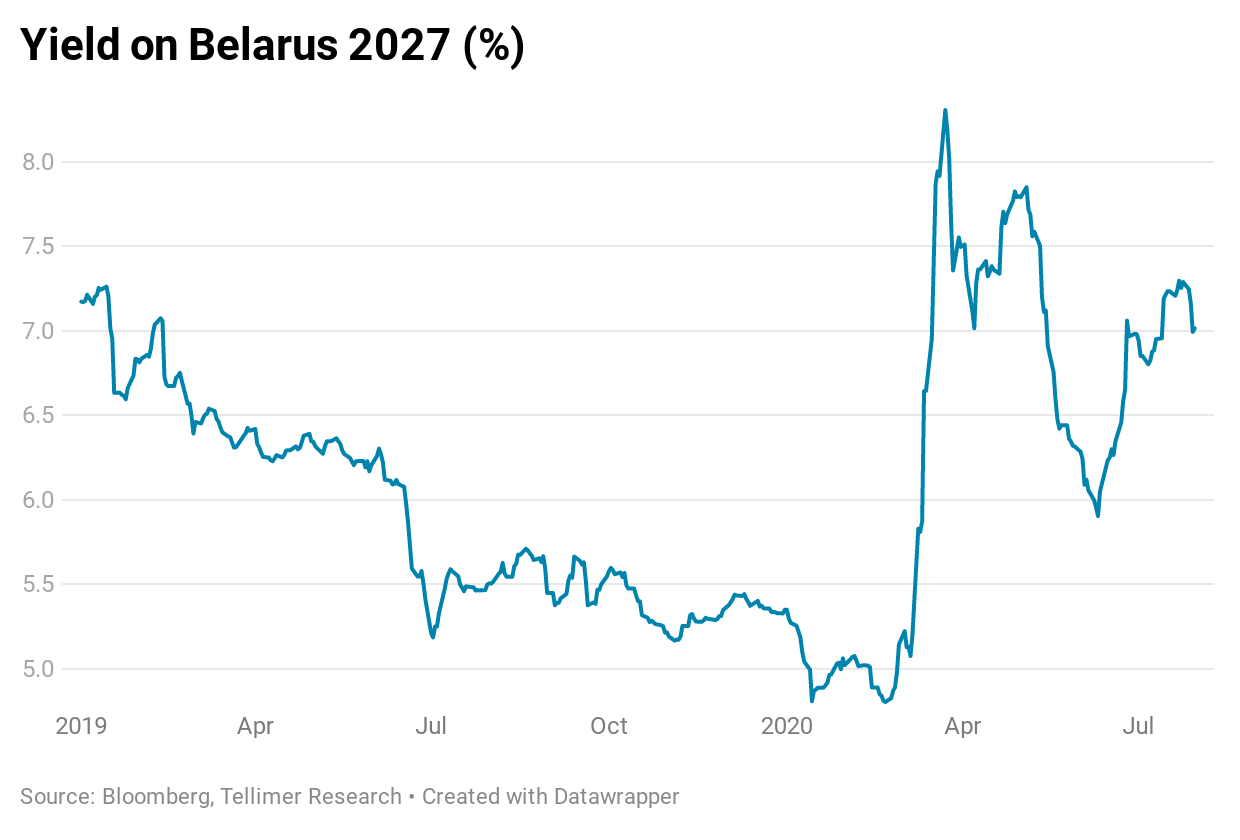