The IMF announced on 28 September that it had reached staff-level agreement on a new programme for Barbados, a joint 36-month extended fund facility (EFF) amounting to US$110mn (90% of quota) and an additional US$183mn (150% of quota) under the Fund's new resilience and sustainability trust (RST). The agreement is subject to approval by the IMF Executive Board.

Programme discussions came at the request of the Barbados authorities in recognition of the macroeconomic challenges from recent global developments, not that we think Barbados is on the verge of another crisis. On the contrary, it has performed well since the 2018-19 episode, and following the debt restructuring that was completed in November 2019. Rather, a new programme provides insurance and more concessional external financing at a time of rising global rates. The new agreement follows the successful conclusion of its prior arrangement, a near four-year-long EFF that was approved in the wake of Barbados's debt crisis, in June 2022.

The EFF builds on the achievements under the previous programme. Staff noted the authorities' "good progress" in implementing its Barbados economic recovery and transformation (BERT) plan. Key elements of the new programme include a gradual and sustained increase in the primary surplus (which the IMF projected in June at 1% of GDP for this year) to accelerate the reduction in public debt (still over 100% of GDP), supported by structural reforms, such as the strengthening of tax and customs administration, reforms in public financial management, the public pension system and state-owned enterprises, as well as growth and resilience-enhancing measures, including steps to improve the business climate.

Staff noted that, notwithstanding the global challenges, the economic recovery is well underway. Real GDP growth is projected at 10% this year (down from 11.1% projected in the final review of the prior EFF in June 2022), driven in part by a rebound in tourism (now c60% of pre-pandemic levels), and a gradual economic recovery is expected over the medium term. However, downside risks to the outlook remain high. Inflation, at 5.8% yoy in June, has picked up since the second half of 2021 due to supply chain disruptions and increasing global food and oil prices. Meanwhile, we note that public debt, which stood at 147% of GDP in 2020, was projected at a still high 120% this year by the IMF in the final review of the EFF.

But it is the RST component that is the novelty here.

Barbados is the first country to reach staff-level agreement to access the IMF’s new resilience and sustainability trust (RST). The RST, for which most members are eligible, was announced by the Fund in April and aims to provide affordable, long-term financing to help build resilience against climate change. Access is based on a country's reforms strength and debt sustainability considerations, and capped at the lower of 150% of quota or SDR1bn. The loans are highly concessional with a 20-year maturity, 10½-year grace period and low interest rate. To qualify for the RST, countries need a concurrent financing or non-financing IMF-supported programme.

In the case of Barbados, the proposed arrangement will support the country’s climate change adaptation and mitigation efforts, through various green-focused reforms, and support its goal of transitioning to a fully renewable-based economy by 2030. It is expected to catalyse additional financing from other international financial institutions and the private sector.

The IMF's announcement on a new programme also follows the authorities' recent cash tender offer to repurchase some of its sole outstanding international bond, the US$530.6mn 6.5% 2029, which came out of the 2019 debt restructuring. The offer was announced on 9 September and closed on 15 September. The results show the amount accepted was US$77.6mn (notional), out of US$169.8mn (notional) validly tendered, at a purchase price US$92.25 (per US$100 face), implying an aggregate consideration of US$74mn (including accrued). Settlement is, however, subject to meeting the new financing condition, under which the borrower (Barbados) intends to execute a multi-currency term facility agreement arranged by Credit Suisse and FirstCaribbean International Bank. We understand this consisted of issuing US$150mn in new debt, with IADB and TNC guarantees, in the form of Blue Bonds to provide proceeds for the tender, and with savings used for ocean protection (similar to Belize). If the tender goes through, it will reduce the bonds' outstanding to cUS$460mn.

We do not have a recommendation on Barbados (Caa1/B-/-). The BARBAD 2029s were priced at US$93.4 (yield 8.2%) on a mid-price basis as of cob 28 September on Bloomberg, with a z-spread of 448bps. The bond has fallen by 7pts this year, with the yield rising by 185bps, although the spread has narrowed by 78bps and is broadly back to pre-Covid levels.

Barbados has made good progress since its 2018 crisis and the new programme allows it to consolidate those gains. However, we observe that the bond looks expensive on our ratings versus spreads model. Among the main regional comps, the BARBAD yield compares with 5.7% (191bps spread) on Jamaica '28s (B2/B+/B+) and 8.0% (438bps spread) on Dominican Republic '29s (Ba3/BB-/BB-), while the yield on Bahamas '32s is 18%. 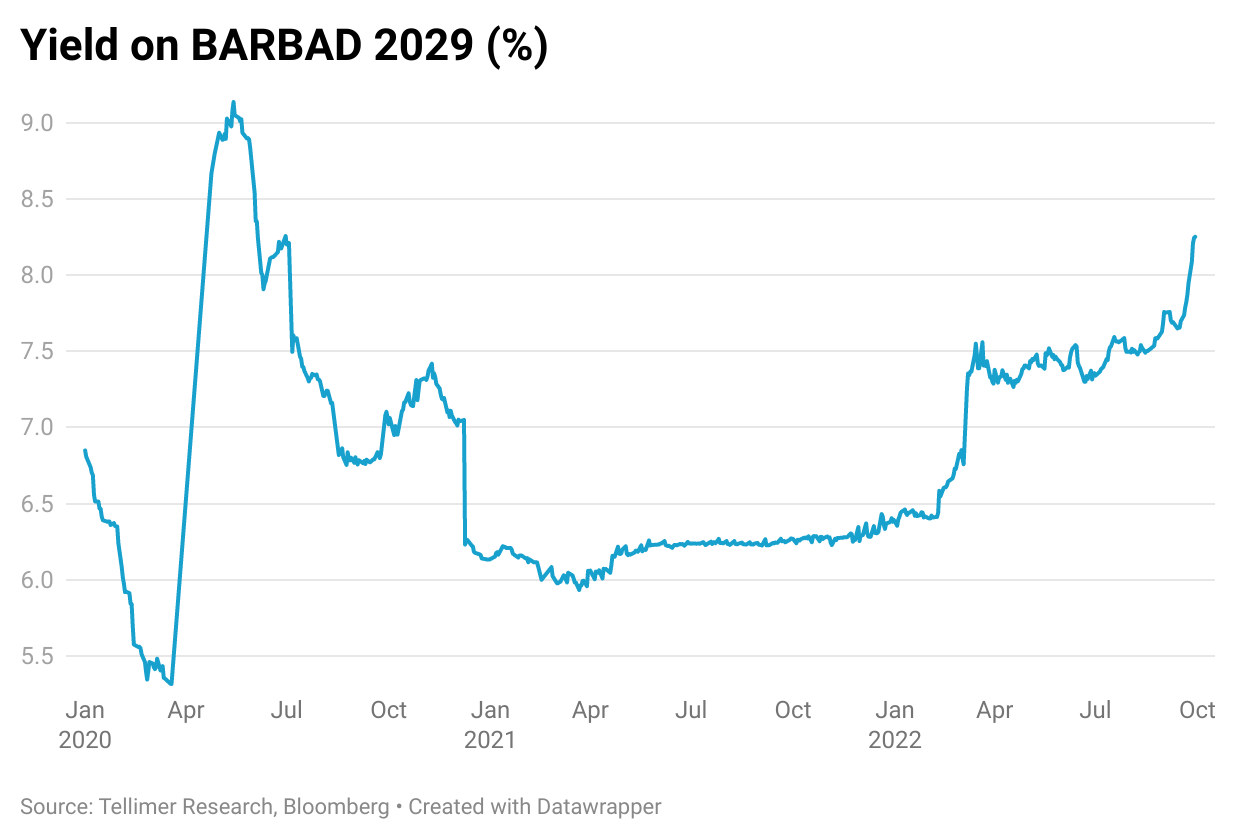 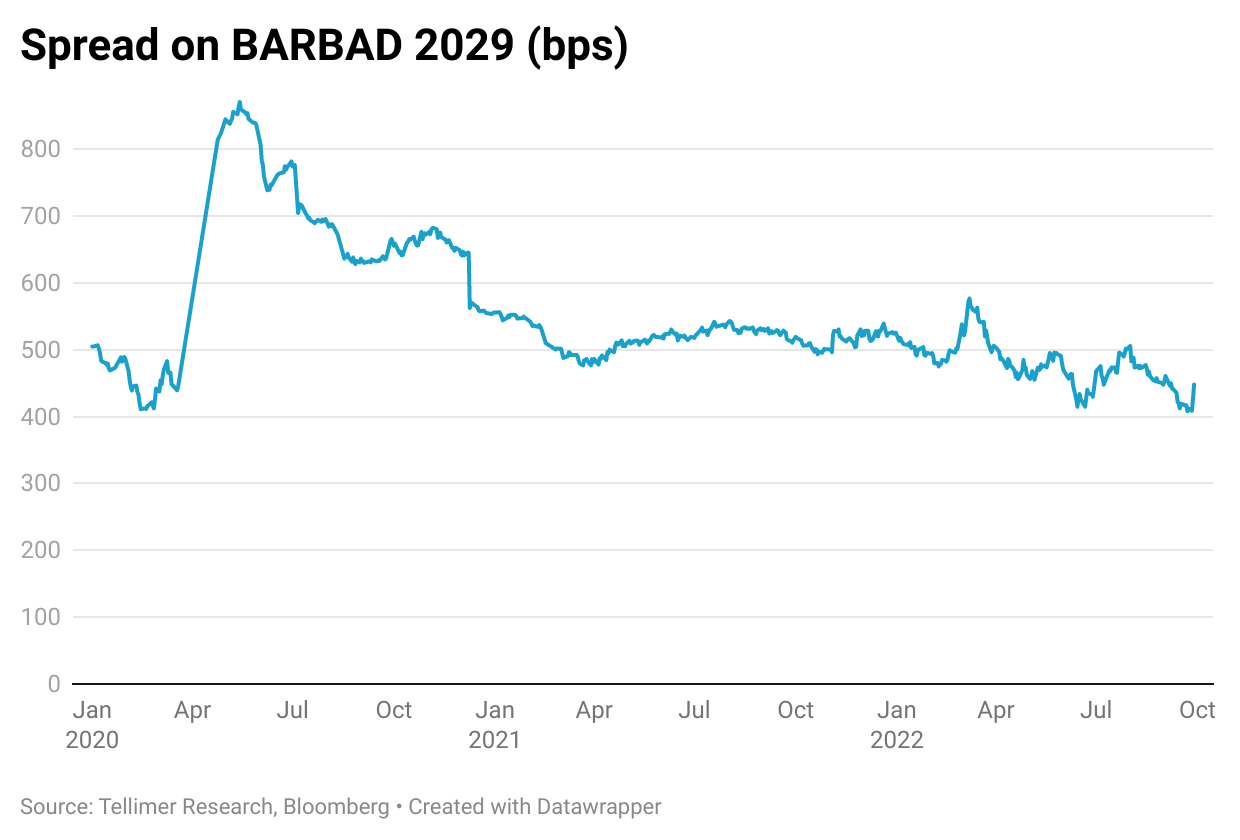