Banxico published the minutes of the decision held on November 10th, in which they hiked the reference rate by 75bps to 10.00%, with a dissenting vote from Deputy Governor Gerardo Esquivel

Banxico minutes reaffirm a less hawkish tone. In our opinion, the document has very relevant information about member’s views regarding the factors that will drive upcoming decisions and the possible terminal level for the reference rate. Broadly speaking, we think that the document validates our call of a less hawkish tone in the last statement. Among the most relevant points, we highlight the discussion on three fronts: (1) Banxico’s moves relative to those of the Fed, and their possible implications; (2) comments regarding the terminal rate level and the actions to be taken once it is reached; and (3) the magnitude of the upcoming move. In addition, comments on inflation focused on the core component and the risks related to it. Meanwhile, Gerardo Esquivel’s reasons for his dissenting vote suggest that he could reiterate it in the near future, as well as helping us identify comments from the rest of the Board. Considering these, we believe there is consensus that the tightening cycle must continue. This is consistent with our call of an additional +50bps in December, taking the reference rate to 10.50% by the end of the year. After this, we expect two additional increases of 25bp each in February and March, taking the reference rate to 11.00%, which we estimate as the terminal level. Our estimate is based on identical moves for the Fed –with the costs of outweighing still high, especially on the financial stability front– and a still complex outlook for core inflation, despite a downward revision to our forecast for the end of this year.

Discussion about the best actions considering the Fed’s tightening cycle. We believe that opinions did not change drastically relative to the previous minutes, even when considering the dissenting vote. A point where we identified renewed interest was in how local adjustments relative to Fed decisions have taken place –and how they could be ahead. The clearest comment comes from Esquivel, arguing that it is desirable to decouple from the US monetary authority in a relatively favorable environment. On the rest, consensus is that following the Fed is not a mechanical decision, obeying several factors. One that stands out is that the inflationary cycle is synchronized between the two countries. In our opinion, Heath seems to show a greater aversion to decouple, talking about a specific spread of 600bps (current level) and that this could not materialize until inflation dynamics diverge and/or we have more information about the Fed’s terminal rate. On a more moderate note, Rodríguez y Borja talk about conditions that so far have made these adjustments to happen in tandem, with additional factor that must be considered. Related to this, we present a table with our assessment of the main comments made by each member: 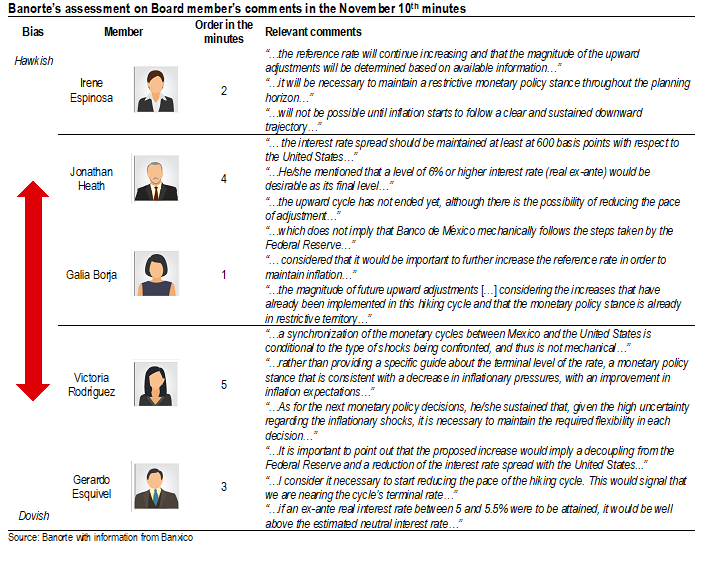 Still no definition over the terminal level, albeit with an increasingly hot debate. There were three specific comments on the terminal rate, one more than in the last occasion. We believe that Heath turned more hawkish, stating that it would be desirable that said reference stands at 6% or higher (with his previous comments being “around 6%”). On the contrary, Esquivel reinforced his dovish stance, arguing that a level between 5% and 5.5% could have adverse effects on consumption, investment, and loans. Governor Rodríguez likely stated that, instead of giving a specific orientation about its level, they must consolidate a stance consistent with lower inflationary pressures. To put these numbers in context, the current real ex-ante rate based on 12-month expectations from Banxico’s survey (at 5.46%) stands at 4.30%.

Assuming this remains constant in coming months, to reach Esquivel’s range we would need between +70bps and +120bps more nominal rate hikes; to reach Heath’s view, +170bps would be necessary (Banorte: +100bps). Something that seems clearer is that the rate will need to remain high in the forecast horizon, with Heath and Espinosa more emphatic on this point. Finally, regarding the magnitude of the next adjustment, Borja, Espinosa, and Rodríguez affirm that this will depend on prevailing conditions, with Heath explicitly arguing that the pace could slow down.

Concerns remain about the inflation path, especially for the core. Board members agreed that the decline in annual headline inflation in the last four fortnights (till then, with the count currently at five) does not fade out in any meaningful way the persistent pressures seen at the core level. Therefore, most of the discussion was centered on the latter’s behavior and expected path. They highlighted that these pressures can be explained by higher mobility, the increase in companies’ operating costs, and second-round effects from high food prices to related services. On inflation expectations, it was noted that those for the core kept increasing, both at the short- and medium-term horizons. To this it should be added that the balance of risks remains skewed to the upside. On this front, two factors were highlighted: (1) Price pressures that remain centered at the core; and (2) the possibility of renewed cost increases due to hiring conditions or wage revisions.

Null reaction of local assets to the minutes. Local rates remained virtually unchanged after the release. It is worth noting that the US market is closed today for Thanksgiving, so trading volumes are low. In this backdrop, both Mbonos and TIIE-IRS swaps are mostly unchanged relative to the previous close. In our view, the document lacks information that could modify the market’s view about monetary policy in coming months. In this context, swaps are pricing-in that Banxico concludes its tightening cycle at 10.92%, as well as a strong conviction of a more modest pace in December (+59bps). This scenario is quite close to our call of 11.00% by the end of 1Q23. Later, the market sees a decoupling between Mexico and the US at the start of the easing cycle, adjusting -180bps and -40bps in 2H23, respectively. Given unusual bond volatility and the shape of the curve, we reaffirm our preference for relative value strategies. However, we recognize that long-term Mbonos still have room for gains despite the 80bps rally seen so far in November. Specifically, we keep flagging the tenors Nov'38 and Nov'42.

In the FX market, the dollar extends losses seen in the previous two sessions, assimilating the Fed minutes that signaled a less aggressive hiking pace ahead. The DXY and BBDXY are losing 0.2% and 0.3%, in the same order. The Mexican peso remains virtually unchanged at 19.36 per dollar, outlining a 0.4% weekly gain. We believe that the room for further appreciation is increasingly limited. Despite its recent setback, it is our take that the USD will benefit from the increased probability of a recession in 2023. We suggest buying USD/MXN at current levels for short-term tactical trading.