Banxico’s minutes more hawkish at the margin. In our opinion, the document has very relevant information about the view of Board members and the factors that will drive upcoming decisions. Although we noted only slight changes in the last statement, we think that the minutes have a more hawkish bias, with greater concerns on inflation and its expectations. We perceived that, for most, following decisions will depend on prevailing conditions at said moment. It seems that some divergence among members persists over the magnitude of the next adjustment, although in our opinion, with a lower risk of an immediate change relative to previous minutes considering the more restrictive tone. In our opinion, Irene Espinosa and Jonathan Heath would call for at least maintaining the current pace –if not accelerating it if conditions deteriorate–, while Victoria Rodríguez and Galia Borja seem to prefer waiting for additional information. Finally, we believe that Gerardo Esquivel could push to reduce the pace as soon as November. Another relevant debate was over the terminal rate, where there are contrasting opinions over which will be its level and when will it be reached, albeit with agreement that it must be determined relative to the real ex-ante rate. In addition, Irene Espinosa was clear in that she thinks that the rate must remain in restrictive territory for the remainder of the forecast horizon. In this context, we keep expecting +75bps in November, with the rate by year-end at 10.50%. Tightening would continue in 2023, with the terminal rate at 11.00% by the end of 1Q23.

Some differences regarding the size of the next adjustment remain. We believe that opinions have not changed significantly from those of the previous meeting, although there are signs that some of the more hawkish members (Jonathan Heath and Irene Espinosa) might consider a larger hike if circumstances call for it. This is clear when considering that it was likely Heath who talked about the benefits and costs of a 100bps hike. However, it seems that the costs would be greater, at least for now. Meanwhile, Espinosa does not seem to have ruled out that adverse conditions and uncertainty could lead to an adjustment in the pace  –which for us would translate into larger increases. Meanwhile, we think Victoria Rodríguez and Galia Borja maintained their position, considering that the adjustments should be made based on prevailing circumstances and available information, although both agreeing with a deterioration in current conditions. Lastly, we believe that Gerardo Esquivel was clearer regarding moves vs. the Fed, arguing that they could be decouple as soon as in the next decision –this in a context in which the expectations of most market participants point to +75bp by said institution. Below, we present a table with our assessment of the main comments of each one: 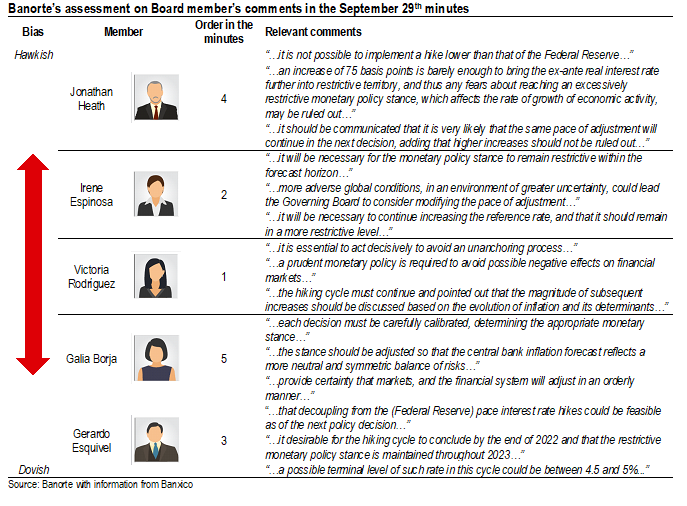 More discussions over the terminal rate of this hiking cycle, with diverging opinions. In the arguments of these minutes, we find two clear and somewhat opposite postures regarding which could be the terminal rate for this tightening cycle. In our opinion, Heath would have signaled that the ex-ante real rate should stand at a level close to 6.0%, higher than what the market forecasts. This, as a result of more complex inflation conditions, the pace of the Fed’s hiking cycle, and higher risk aversion in financial markets. On the other hand, we believe that Esquivel is the one who estimates that a possible terminal level between 4.5% and 5.0%, and that it could be reached by the end of 2022 –maintaining a restrictive stance throughout 2023. According to our estimates, currently the ex-ante real rate stands at 3.88%.

Assuming that the 12-month inflation expectation remains constant at 5.17% (taken from Banxico’s survey for September), our nominal terminal level of 11.00% implies a real rate of 5.54%, which seems reasonable to us and is in line with the previous comments. Finally, and regarding the duration of the rate in restrictive territory, Irene Espinosa emphasized in her dissent that “…the monetary policy statement should mention explicitly and clearly that, in order to converge to the 3% target, the monetary policy stance must remain restrictive during the entire forecast horizon…”.

The balance of risks for inflation continues with a considerable upward bias. The Board remains focused on current inflation levels. Although they mention that these are partly due to a global phenomenon –with imbalances between supply and demand– they recognize that at s local level there are generalized pressures, both in the core and in the non-core components, with an emphasis on food and in the growing increases in services. Concerns also fall on the medium- and long-term inflation expectations. Most members mentioned that higher-than-expected shocks and the view that their effects will last longer, have led to an upward revision of both the headline and the core inflation in the remainder of the forecast horizon, placing the convergence in 3Q24. In this sense, a member pointed out that it cannot be ruled out that inflationary shocks will worsen, or that new pressures will materialize. Among the risks identified, most recognize both the persistence of core inflation and external inflationary pressures. Lastly, two members added the increases in minimum wages as a possible risk, while one ruled it out.

Tightening will continue in a very challenging environment. Considering that all members of the Board are still concerned about inflation, and that the Fed continues to be one of the factors considered, we believe that the increases will continue. Furthermore, it is not possible to completely rule out an even high pace in the short-term, although it is not our base case. On prices, our expectation is more adverse than that from the central bank, anticipating higher pressures in the core component –both in magnitude and duration–, with our average estimate for 4Q22 at 8.9% (vs. 8.6% of Banxico). Regarding the relative monetary stance, we are aligned with market expectations on the Fed, with futures discounting +75bps in November with almost 100% probability, consolidating after still negative inflation results in that country. Another factor that could contribute to this is the higher volatility in financial markets. In this sense, it is worth noting that local assets, such as the exchange rate have shown some stability. We think that an important reason behind this is that Banxico will continue to prioritize caution and prudence. In this backdrop, costs from decoupling from the Fed could be high, which is why we believe that they will continue to be linked for the remainder of this year and for much of 2023. Considering the latter, we reaffirm our expectation of +75bps on November 10th and +50pbs in December, with the rate by the end of the year at 10.50%. Hikes would continue in 1Q23, anticipating two +25bps adjustments which will take us to a terminal level of 11.00%.

Markets are pricing a terminal rate of 10.91% in 1Q23. Local rates reflected few changes after the minutes. However, it is worth noting that the session was characterized by strong pressures in bonds, led by Treasuries. The negative surprise in US report caused the curve to lose up to 22bps at the short-end. Similarly, the Mbonos’ curve flattened given losses of up to 10bps in the short-end and few changes at the long-end. Meanwhile, TIIE-28 swaps retained losses of 7bps, on average. After this, the market now sees a terminal rate for Banxico of 10.91% in 1Q23 from 10.75% a week ago. This scenario is still a bit lower than our view of 11.00% at the end of the same period. In terms of strategy, longer-term Mbonos have increased their relative value, mainly Nov’38 and Nov’42. However, given the unusual volatility and the current shape of the yield curve, we keep avoiding directional positions. In this regard, we still prefer relative value strategies, maintaining our trade idea to pay TIIE-IRS (26x1) and receive 2-year SOFR. In the FX market, the Mexican peso weakened after US CPI report, the standing at its 100-day MA at 20.15 per dollar. However, after Banxico’s minutes, MXN advanced slightly, partially diluting its losses to 20.05 per dollar (-0.3%). We believe that the peso has limited room for an additional appreciation given an overvaluation above 10% according to our models. In technical terms, there is still space for further net short positioning. Moreover, it is our take that USD gains are not over yet due to Fed’s determination to curb inflation. In this sense, we see levels below 20.00 as attractive to buy USD.