Banxico Minutes – Debating the relative stance and the need for forcefulness

Banxico minutes hawkish, though less so at the margin. In our view, the document contains very important details about each members’ vision and the determinants of their decisions going forward. This is very important considering changes in the statement, in which it was highlighted that changes in their decisions will depend on ‘prevailing conditions’. This was stated even though concerns remain determinedly on inflation. In this sense, we continue to think that the two key points that will dictate upcoming movements are: (1) Local inflationary conditions; and (2) the monetary tightening of the US Fed. However, and relative to the previous minutes, there seems to exist a higher degree of divergence between Board members. We note three different postures. The first and most hawkish we think is from Irene Espinosa and Jonathan Heath, who argue that it is necessary to continue acting forcefully; the second, which we believe is supported by Victoria Rodríguez and Galia Borja, where data dependency and the room available for adjustments is gaining greater importance; and the third, by Gerardo Esquivel, which stresses the need to avoid excessive tightening. Despite higher uncertainty, we believe Banxico will continue with the same pace in the short term. This is mainly based primarily on our expectations about inflation pressures and the Fed. Hence, we maintain our +75bps call for September 29th, with additional hikes for the rest of the year to bring the reference rate to 10.00% in December, which we believe will be the terminal level for this tightening cycle.

Opinions suggest less clarity on the pace of upcoming adjustments. We believe that the minutes show the main reasons behind the changes made in the decision’s statement, where they eliminated the words “same forceful measures” opting instead to express “prevailing conditions” regarding next rate adjustments. Based on our evaluation of each members comments, most maintain a hawkish bias. Nevertheless, we highlight those that, in our opinion, have separated marginally. In particular, we consider that Victoria Rodríguez and Galia Borja have tilted more towards determining the level of the following meetings based on available data (which will most likely be inflation and Fed’s decisions). On the contrary, Irene Espinosa and Jonathan Heath would keep biased towards forceful measures, at least for the next meeting. Finally, we continue evaluating Gerardo Esquivel as more dovish, showing greater interest on the possible costs of an “excessive tightening” on economic activity. Up next, we present a table with our assessment of each member’s most relevant comments: 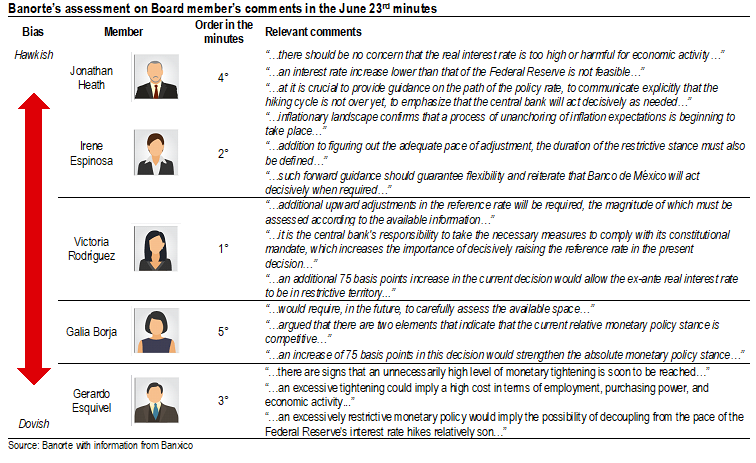 Attention to the Fed given its implications for the relative monetary stance. In our opinion, it was very important to assess in these minutes the opinions of the Governing Board members on the impact of the relative monetary stance with the Fed. First, we highlight that this point was addressed by four out of the five members, indicating a growing relevance. Once again, Gerardo Esquivel maintained that, to avoid an excessively restrictive position, it would be adequate to disassociate soon. Meanwhile, Galia Borja commented that a high interest rate spread has helped to see orderly adjustments in the yield curve and supports the exchange rate. This makes us think that, at least for the next decision, she could favor following the Fed, in line with our arguments about what the next step will be. On the other hand, we believe that Irene Espinosa commented that “... the main risk is the possibility of unforeseen changes in monetary policy in the United States…”, which shows the importance of this factor in their reaction function.

Finally, the most emphatic seems to be Jonathan Heath. Although his comment on the increase relative to the Fed was probably referring to the action taken, we believe this could extend to the next decision. This is especially true after a recent interview in which he clearly stated that the movement of said central bank will probably be Banxico’s “floor”.

At least two members see the need changing the forward guidance. We consider that Jonathan Heath has been the most vocal in the need to increase the institution’s transparency, a situation which we think is also supported in this document. This is important considering his comments about actions ahead, but also on the possibility of including additional information in the statement. It seems that Irene Espinosa has jumped on this wagon, also being more explicit on the forward guidance given the need to reiterate the commitment of the institution with its mandate. Maybe more so in an indirect way, other members could also support this. In our opinion, some of the proposed changes –such as stating the reference rate path that would be consistent with Banxico’s inflation estimates–could improve the transmission of Banxico’s communications to financial conditions and increase the efficiency of monetary policy.

Challenging conditions will likely result in tightening at a fast pace. Considering Board members’ opinions, we believe the evolution of the two main points within the central bank’s reaction function –inflation and the Fed– will result in the continuation of a high pace interest rate increases. Although we concur with the institution that the highest point for inflation will likely be reached in 3Q22, it is our take that the downward path will not be as quick. This could skew them to take more substantial actions in the short-term. The rationale would be to have a larger impact when considering the lagged nature of the effect of policy decisions on economic activity and price dynamics. On the Fed, the market discounts 67bps of hikes, which suggests that the adjustment will either be 50bps or 75bps, tilted towards the latter and matching with our scenario. In this sense, Chairman Powell’s speech tomorrow in the Jackson Hole Symposium will be relevant to have additional information on this. When accounting for these two points, as well as Banxico’s historically prudent bias, we keep anticipating a 75bps hike on September 29th. After this, and considering additional adjustments for the remainder of 2022, we expect the reference rate at 1.00% by year-end, the level that we estimate as the terminal rate for this tightening cycle.

Market bets remain inclined towards a 75bps hike in September. After Banxico’s minutes, the Mbonos’ curve registered a modest flattening bias. Short-term securities lost 1bp, while long-term ones increased their gains to 4bps from 2bps on average. In a similar fashion, the short-end of the TIIE-IRS curve held its pressures (1bp), while the long-end gained 2bps. As a result, the market still expects Banxico to continue with the same hiking pace as the two previous decisions, increasing the reference rate to 9.25% in September, in line with our call. In particular, the curve is pricing-in +70bps in September vs +50bps on August 12th.

With this, the market has recalibrated its expectations towards a higher terminal rate since Banxico’s latest decision, approaching our 10.00% call from 9.75%. In terms of strategy, we maintain our recommendation to pay TIIE-IRS (26x1) and receive 2-year SOFR, started on August 18th with an entry of 583bps and target at 620bps (current: 602bps). In the current backdrop, we recognize that interest rates will keep showing unusually high volatility regarding upcoming monetary policy adjustments both in the US and Mexico. This is because market expectations will likely keep reflecting very high uncertainty about the magnitude and duration of monetary policy cycles. Hence, we think the risk/reward profile in outright positions is not attractive enough, preferring relative value trades.

In FX, the dollar is losing and allows all developed and most emerging market currencies to advance. However, the Mexican peso started the session with a negative bias. After the minutes, the MXN temporarily recovered ground, but then returned to 19.95 per dollar (-0.3%), pairing three positive sessions in a row. In the short-term, we believe that MXN will continue to be supported in the short-term by: (1) Banxico’s relatively high interest rate and the attractive spread when compared to other central banks; as well as (2) lower implied volatility relative to EM peers. In this context, we see the 19.90 to 20.00 per dollar zone as attractive to buy USD because we also recognize a limited room for further appreciation, especially considering a fair value estimate of 21.86 according to our models.