US Treasury futures are steady this morning, holding yesterday’s losses which saw bonds cheapen by up to 6bp across the curve. Gilts were the underperformers yesterday following some strong wage data out of the UK, with higher yields there driving up those for European bonds as well as USTs. The US session then saw some stronger-than-expected industrial sector data, which helped to keep the pressure on the bond market.

The day ahead, meanwhile, will see focus turn to the FOMC meeting minutes. Although a lot has happened since the last meeting, the minutes will still be parsed for clues as to the Fed’s outlook for inflation and the economy. Some rate hike risk has been priced out of the market in recent sessions, and there is the risk that this could be reintroduced should today’s minutes still strike a hawkish tone. That would lead to a flattening of the yield curve once again, and could pressure risk assets as the odds of the US entering a recession would be bolstered.

Ahead of the Fed minutes that are due to be released on Wed, the USD paused its advances. It was also important to note the weakness reflected in the latest US housing data which may have also detracted from some of the USD’s strength if it gave rise to expectations that the Fed may not need to be as aggressive in its tightening. Finally, President Biden has signed the inflation act handing it to Democrat Senator Manchin for approval. The act aims to tackle climate change as well as prevent inflation from rising too aggressively. Although it will take time to influence the inflation data, it is something else for the inflation hawks to consider. The EUR recovered marginally to 1.0180, while the GBP has traded up to 1.2120 this morning.

Zambia: The Bank of Zambia (BoZ) will today deliver its latest verdict on its policy rate after keeping it unchanged for the second straight meeting in May, citing easing inflationary pressure. While inflation in July rose for the first time since June 2021, it remains modest compared to levels seen over the past two years. The resilient Zambian kwacha, which has gained over 3% YTD against the USD, is helping to contain price pressures stemming from supply-chain disruptions related to the war in Ukraine and intermittent Covid-19 lockdowns. Nevertheless, inflation in Zambia has remained above the BoZ's 6-8% target range for more than three years now, and risks are still tilted to the upside amid still elevated global food and energy prices and tightening global financial conditions. This suggests that the BoZ could consider hiking its policy rate when it meets.

Egypt: A poll conducted by Reuters showed that the Central Bank of Egypt (CBE) is expected to raise its overnight deposit rate by 50bp this week as it tries to contain inflation. The median forecast in a poll involving 15 analysts is for the CBE to raise the deposit rate to 11.75% and its lending rate to 12.75%. Inflation in Egypt quickened after a month of cooling off, as rising food prices, a local hike in fuel costs, and a weaker currency added more pressure on consumers in July. The renewed acceleration and upside risks to the inflation outlook point to the possibility of another rate hike by the CBE.

Kenya: Raila Odinga rejected the outcome of the presidential elections yesterday and vowed to take constitutional steps to contest the outcome. Odinga, who lost by the narrowest of margins, said that the head of the electoral commission did not follow due process, rendering the results "null and void". Odinga's comments come after four of the country's seven electoral commissioners on Monday said they did not accept the outcome because the process was handled in an "opaque" way. The dispute and delay in the new president's swearing-in potentially pose a risk to the political stability in the country.

Mozambique: As a terrorist insurgency in Mozambique threatens gas projects meant to reduce the European Union's dependency on Russian Energy, the EU is reportedly planning a five-fold increase in financial support to an African military mission in the country. An internal document prepared by the European External Action Service (EEAS), the EU's de facto foreign ministry, recommends EUR 15mn ($15.3mn) of EU funding to 2024 for the mission of the Southern African Development Community's bloc of 16 African nations of which half a dozen sent troops to Mozambique. The mission is expected to be extended for six or twelve months at a SADC summit in Kinshasa starting tomorrow. The energy squeeze due to the Ukraine war has added impetus to Europe's scramble for gas off Mozambique's northern coast, where Western oil firms are planning to build a massive liquefied natural gas (LNG) terminal.

Oil: Oil has steadied this morning after another day of selling yesterday, which took prices to six-month lows as traders weighed slowing global economic growth and the potential for more supply. Officials from Europe and the US have both said that a new deal with Iran is looking likely within the next few days, with the Biden Administration currently reviewing Iran’s response to Europe’s proposal. While some are still sceptical that a deal will be reached soon, the market is pricing in a return of around 2.5mn barrels per day of Iranian crude, which could be front-loaded as Iran would have notable stockpiles of oil given the sanctions placed on it since the Trump days. Unless the deal is rejected by either side, oil prices will remain under pressure over the near term, especially as growth concerns for the likes of the US and China continue to build.

Forex: Bank of Ghana is set to hold an emergency meeting following the recent cedi sell-off 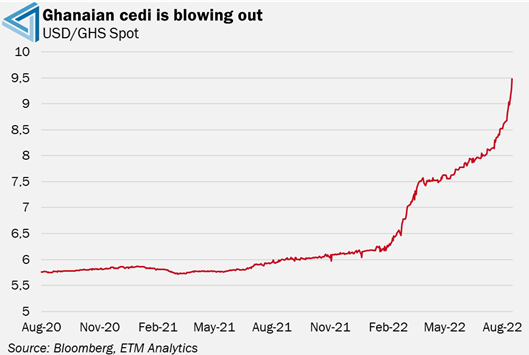 The cedi recorded its biggest daily decline in more than three years on Monday, depreciating by -2.7% and added to those losses on Tuesday to close north of GHS 9.4000 per dollar. Pulling back the lens, the cedi has lost over 52% year-to-date basis against the USD, making it Africa’s worst performing currency. The cedi has slumped on the back of factors such as a loss of investor confidence due to a worrisome fiscal outlook further compounded by challenging external conditions, several rating downgrades, and limited dollar supply against a backdrop of increased demand. Regarding the latter, last week’s Forex Forward Rate Auction showed that demand for dollars by dealers outstripped supply. Bids submitted for the purchase of dollars were estimated to be at $130.25mn, while the BoG could only supply $25mn.

ETM’s purchasing power parity (PPP) model shows that the cedi has slipped into undervalued territory. While this suggests that, according to mean reversion theory, risks of further depreciation in the currency have declined, it is worth highlighting that during times of distress, the currency has the ability to become significantly undervalued, as was seen in 2014 when the cedi was undervalued by more than 30%. 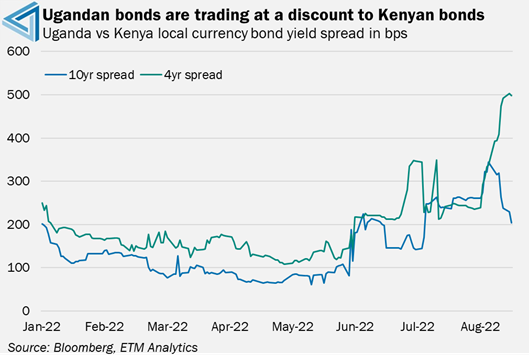 A spread analysis shows that while the spread between Uganda’s 2032 local currency bond yield and the comparable Kenyan bond yield has compressed, it is still above 200bps. The spread between the shorter-dated 2026 bond yields meanwhile sits just below 500bps following a sharp rally in shorter-dated Kenyan bonds. Note that the 2025 spread was trading at levels as low as 110bps in April, while the 2032 spread touched levels close to 50bps in April.

Although markets are on edge amid the uncertainty surrounding the election results, the widening spread between Ugandan bonds and Kenyan bonds suggests that traders are betting on Kenyan bonds over similarly rated Ugandan bonds. This is interesting given the political and fiscal risks in Kenya. It is worth noting that inflation in Uganda has accelerated sharply in recent months, pushing the central bank to hike rates by 250bps this year. Meanwhile, the Central Bank of Kenya has hiked its benchmark interest by just 50bps, which helps explain some of the divergences between Ugandan and Kenyan bond yields. 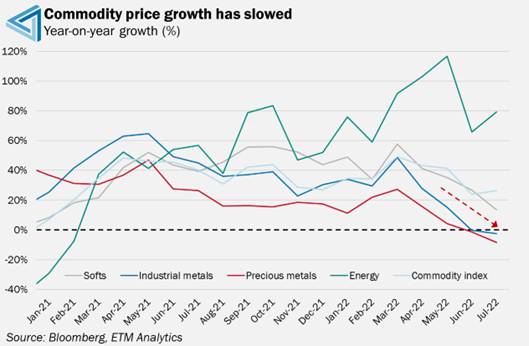 Price growth in the soft commodity sub-index, which includes wheat, maize, coffee and sugar, seems to have peaked, slowing from a high of 52% y/y in May to 14% y/y in July. We saw a significant spike in soft commodities earlier this year when the war between Russia and Ukraine erupted as supply concerns surged. Russia and Ukraine export around 30% of the world's grains. However, in the last month, we have seen supply concerns ease after an agreement was reached to allow Ukraine grain ships to start operating. Meanwhile, price growth in the precious and industrial metal sub-indices has fallen into contractionary territory as concerns over China’s economy heat up.

Price growth within the energy sector is still elevated due to the energy crisis in Europe and supply shocks related to the sanctions on Russia. We have seen oil and gas prices rise to record highs. High oil and gas prices push up consumer prices through many different avenues, such as high shipping prices, electricity prices and transportation costs. It must be noted that even though we have seen brent crude prices falling recently, energy prices are still extremely high compared to year-ago levels. In conclusion, while it is encouraging to note that commodity-driven price pressures are subsiding, supply-side inflation risks remain skewed to the upside.