FX: There was a slight recovery in the USD through Asian trade this morning as investors positioned for the difficulties reflected in stock markets, responding to the Covid news and protests stemming from China. Technically, it now appears as though the USD has formed a base and will find greater support. The CNY has weakened on the Covid surge, and the USD’s safe-haven status may come back into the picture, although it is unlikely to change the medium to the longer-term prognosis that is still USD negative. The Fed is likely to be one of the first central banks to pivot and reach for the pause button, and while that is the case, investors will price out of the market further expectations of monetary policy disparities. The EUR is showing a similar picture to the USD index and is retreating away from its recent highs to trade back towards 1.0350, while the GBP has retreated slightly but remains on a recovery path as more conservative monetary and fiscal policies are implemented. Of the three, the most austere policies have been adopted by the UK and over time that will reflect in a recovery in the GBP.

Commodities: Oil has plunged through the Asian session this morning, with China’s persistence with COVID curbs and the unrest they have sparked spooking investors and driving a rotation out of risk assets. The outlook for oil demand from the world’s top importer remains highly uncertain, adding to some stress in what was already becoming a fragile market. Congestion data out of China shows that peak-hour traffic in major cities is down anywhere between 35% and 45%, highlighting the impact the lockdown measures are having on fuel demand. Brent has slumped to $81 per barrel this morning as a result, its lowest level this year and down almost 40% from the peaks reached in March

Egypt: As the energy crisis in Europe intensifies, the spotlight light is shifting to Africa to help fill the supply gap caused by the ongoing war between Russia and Ukraine. Given its abundance of reserves, Africa looks set to become a strategic gas supplier to Europe in the years ahead. We are already seeing a shift unfold, with the likes of Egypt signing some significant deals with Europe. Speaking of which, Egypt’s Oil Ministry said on Sunday that it expects to export 8 million tons of natural gas in 2022, of which 90% will have been to the European Union. Note that in 2021, Egypt exported 7 million tons of natural gas, with 80% going to the EU.

Nigeria: On the crypto front, Nigeria’s Securities and Exchange Commission said that it does not plan to include cryptocurrencies in a plan to improve trading in digital assets until regulators agree on standards that protect investors. Director-General Lamido Yuguda said, “we are looking at digital assets that really protect investors, not necessarily crypto.” While Nigeria accounts for the largest volume of cryptocurrency transactions outside the US, according to data from Paxful, the central bank banned lenders from facilitating crypto trades to forestall threats to the financial system.

Angola: After cutting its benchmark interest rate in September, the Bank of Angola’s Monetary Policy Committee voted in favour of leaving the benchmark rate on hold at 19.5% on Friday. The central bank noted that inflation remains on a downward trajectory, with headline CPI falling from a peak of 30.54% y/y in January to 16.08% y/y in October. While the central expects inflation to trend lower in the months ahead, the bank highlighted that the AOA has come under some selling pressure in recent weeks due to lower revenue from oil exports. Despite the recent weakness in the AOA, the local currency is still the best-performing African currency against the USD on a year-to-date basis.

South Africa: Fitch affirmed South Africa’s BB- sovereign credit rating on Friday evening and kept the outlook at stable. The agency said that the stable outlook reflects the over-performance on fiscal revenues and the government's strong efforts to control expenditure, which, if successfully continued, could bring about debt stabilization. However, at this stage, Fitch said that it assumes a substantial part of recent higher revenues to be temporary and sees current public sector wage negotiations pointing to increased upward pressure on spending. Fitch added that SA’s rating is supported by a favourable debt structure with long maturities and denominated mostly in local currency, as well as a credible monetary policy framework.

Malawi: Minister of Finance and Economic Affairs Sosten Gwengwe said in his 2022/23 mid-year review statement that the government has developed a plan to deal with public debt sustainability. The Finance Minister noted that the plan focuses on debt treatment, grant mobilization and budget optimization. The debt treatment could include the restructuring of debt and potential debt haircuts. As of September 2022, Malawi’s debt pile stood at MWK 7.3trn, 14% higher than in March 2022. While Malawi's debt pile has surged this year, Gwengwe said that the government is committed to putting the country back on a sustainable debt trajectory and bringing the country’s external debt back to a moderate risk of debt distress through policy adjustments.

Ghana: In a bid to limit pressure on the cedi, the Ghanaian government is looking to buy oil using gold rather than US dollars. Finance Minister Ken Ofori-Atta said last week that "the demand for foreign exchange to support our unbridled demand for imports undermines and weakens the value of the cedi." Ofori-Atta added that "this contributed to the depreciation of the cedi, which has lost about 53.8% of its value since the beginning of the year. Compared to the average 7% average annual depreciation of the cedi between 2017 and 2021, the current year's depreciation, which is driving the high costs of goods and services for everyone, is clearly an aberration - a very expensive one." While it isn’t yet clear if the government will move ahead with its plan to buy oil with its gold reserves, albeit extreme, the measure would help alleviate a considerable amount of pressure on the cedi.

Forex: Currency resilience has been key in determining moves in monetary policy this year

Currency resilience has played a crucial role in policymaking in Africa this year. Most African currencies have come under pressure this year due to a surging USD and a deterioration in global risk appetite. For context, 19 out of the 22 African currencies tracked by ETM have depreciated this year. While there has been a broad-based sell-off in African currencies this year, the losses have vastly differed, with the likes of the Ghanaian cedi and Egyptian pound plunging -56% and -36%, respectively. In comparison, the Zambian kwacha and Tanzania shilling have lost just over 1% against the USD. 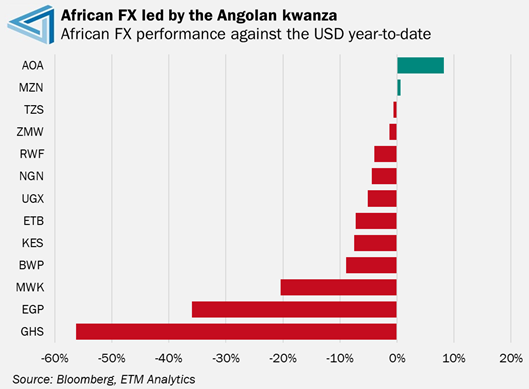 Currency performance has either amplified supply-side price pressures or helped keep them contained. Against the backdrop of the sharp depreciation in the GHS and EGP, inflation in Ghana (40.4% y/y in October) and Egypt (16.2% y/y in October) has spiked, resulting in the need for aggressive monetary policy tightening to contain inflation and inflation expectations. Meanwhile, inflation in Tanzania remains anchored, while inflation in Zambia has decelerated smartly, partly due to the resilience of the ZMW.

Currency performance has played a vital role in the divergence in monetary policy between Angola and the rest of Africa. While most African central banks are still hiking rates aggressively as inflation continues to run hot, the Bank of Angola has begun cutting rates as inflation trends lower. The Bank of Angola cut its benchmark interest rate by 50bps at its September meeting and decided to leave rates on hold on Friday. Despite coming under some selling pressure in recent weeks amid falling hard currency inflows from the oil sector, the Angolan kwanza has still appreciated by almost 8% this year. Looking ahead, we expect currency performance to remain a significant determinant of monetary policy moves in 2023.

Fixed Income: Fiscal outlooks of EMs and DMs are diverging

Global credit rating agency Fitch recently conducted a study on the fiscal conditions of emerging and developed market countries. Interestingly, the study found that emerging market sovereigns are closer than their developed market peers to restoring fiscal balances to the levels before the Covid-19 pandemic. In the report, Fitch stated that fiscal dynamics in both EMs and DMs may deteriorate as the global economic outlook sours.

The study found that there were several factors underpinning the notion that EM sovereigns are closer than DM sovereigns to reversing the loosening of public finances during the pandemic era. Some of the key factors include: 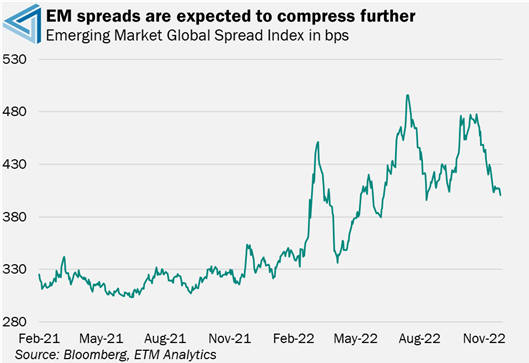 Fitch noted that among the EM sovereigns, those in the Middle East and Africa (MEA) and Latin America are outperforming. Specifically, growth in revenue in both regions has outpaced growth in spending, contributing to an improvement in the average general government deficit position of MEA and Latin America. Soaring commodity prices and financing constraints have played a significant role in the consolidation of fiscal accounts after two-plus years of aggressive fiscal loosening to cushion the economic blow of the pandemic. A further improvement in EM fiscal dynamics will likely result in a compression in the risk premiums between EM bond yields and core bond yields.

While commodity prices remain buoyed well above pre-pandemic levels, commodity prices appear to have peaked as downside risks intensify. The main factor weighing on commodity prices is the deterioration in the global growth outlook. Forecasters have broadly revised their growth forecasters for 2023 lower amid tighter monetary conditions and the knock-on effects of the war in Ukraine and China’s Covid-Zero policy. For context, the IMF downwardly revised its global growth forecast for 2023 by 0.2 percentage points to 2.7%, which compares to the 2022 forecast of 3.2%.

A factor that can’t be ignored when talking about commodity prices is the USD. While the USD has come under some selling pressure in recent weeks, the USD remains lofty by historical standards and therefore remains a significant headwind for commodity prices. That said, while deteriorating demand dynamics are expected to weigh on commodity prices, ETM’s proprietary models suggest that the USD is primed for a correction lower, which could help offset some of the downward pressure on commodities in the months ahead. 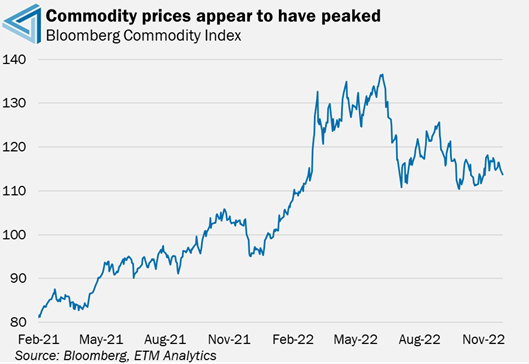 The Bloomberg Commodity Index, which we use as a proxy for global commodity prices, has retreated from the record highs seen in June. For context, the Index has fallen by more than 16% from its peaks but remains some 14% higher than levels seen at the start of the year. While commodity prices remain elevated, the recent pullback should provide some reprieve for inflation, particularly when the high base effects of this year come into play in March 2023.